Concept: Portraits of multiple vehicle owners, as well as images of the vehicles by themselves, each in unique locations.

Licensing: Unlimited use of all images captured in perpetuity.

Agency: Medium in size, based in the Northeast

Here are the estimates: 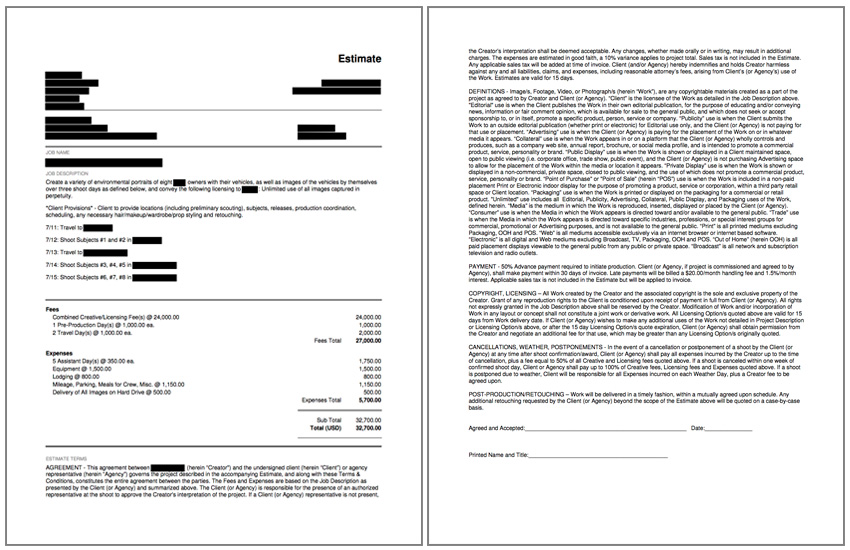 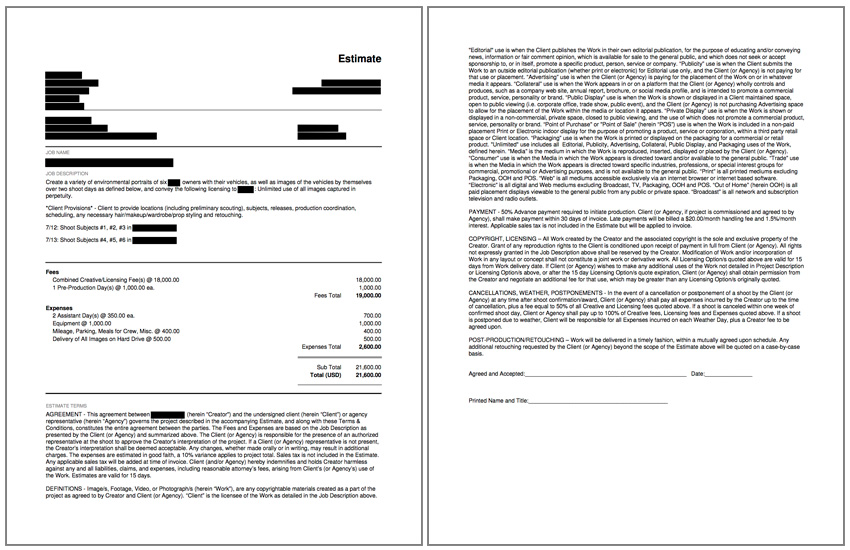 Creative/Licensing: The automotive brand had a well-established group of brand ambassadors across the country that they planned to photograph with their cars. The agency hoped to capture at least six of them that were local to the photographer, with the possibility of photographing two more in a location that would require a bit of travel. Each subject would be photographed at their home and/or garage, and with a limited production approach, the agency anticipated that the photographer would be able to capture three subjects per day. Given the potential additional subjects and travel, they asked for two estimates (one for the local shoots, and another for the shoots requiring a bit of travel).

There was a very large discrepancy between the unlimited use they were requesting and their intended use which was primarily social media focused, with the possibility of placement within some collateral pieces. While I always push to limit the licensing in some way, the agency told us it was non-negotiable. Unfortunately, this is often the case for very large brands, even on projects focusing on non-campaign oriented imagery. In these instances, I do my best to determine a creative/licensing fee that’s appropriate for the client’s intended use. For this project, each subject would likely have two types of shots: a portrait of them with their car and a picture of the car alone. I priced the first image at $2,000 and the second image at $1,000, totaling $3,000 for each subject. In some instances, I’d be inclined to develop a tiered pricing model and discount additional images (or in this case subjects), but since each set of images would be unique, I felt their value was equal, so I stuck with $3,000 per subject across the board for a total of $18k and $24k for each project.

Assistant: I included one assistant on each shoot day, and added travel days for the assistant to accompany the photographer on the trip to capture the additional subjects as well. Since the client wouldn’t be attending the shoot, a digital tech wasn’t critical, and since the people/cars would be captured in an editorial style, there wasn’t a need for any additional crew to help with excess grip/lighting.

Equipment: I included $500/day to cover the photographer’s personal equipment, which included a camera with a backup, a few lenses, and minor lighting gear.

Mileage, Parking, Meals for Crew, Misc: For the local shoots, I included $100/day to cover mileage and parking, plus $100 to cover meals and other miscellaneous expenses over the two shoot days. For the estimate that required travel, I added another $60 per person per day for meals while they would be traveling for three days ($360), plus approximately $400 to cover mileage, parking, and miscellaneous expenses while they were on the road.

Lodging: On the estimate that included travel, I estimated $200/night for two nights, with rooms for both the photographer and his assistant.

Delivery of All Images on Hard Drive: The agency planned to handle all of the retouching, and simply wanted all of the images to be sent to them on a hard drive at the completion of the shoot. This fee covered the cost of the drive and priority shipping.

Results: Based on subject availability, the agency was unable to coordinate the project with the vehicle owners out of town, but they were still interested in capturing the subjects local to the photographer. The agency let us know they had a $20,000 budget to accomplish this and asked us what we could do to reduce costs. While I’d typically suggest limiting the licensing in some way to provide a discount, given the small amount we had to shave, the photographer was willing to take $1,000 off his fee, waive his equipment expenses, and bring the miscellaneous expense line down a bit to hit $19,500. He was awarded the project. Here was the final estimate: 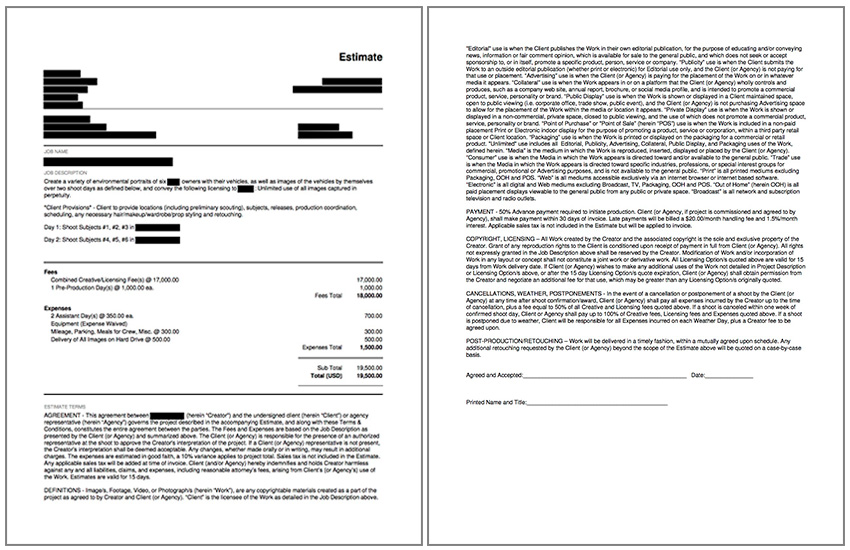 The Art of the Personal Project: Nicole Morgenthau