Social media is an important part of self-promotion and marketing for any business, large or small. And having a wide variety of social media tools at your disposal is important. While it’s true that you can link all your social media accounts together so you can conveniently create one post that will appear on all your accounts, each platform is unique. Twitter, specifically, might be stereotyped as just a funny, witty place to spew out 140 characters of charm, but it has features that distinguish it from its competitors and can help you build your brand and implement your business strategies. For photographers, the short and sweet style of Twitter can help you effortlessly get your photos out there.

Once you’ve decided to join Twitter and set up an account for your photography business, there are a few crucial steps you should take. Keeping in mind that Twitter and other social media platforms are an extension of your brand, make sure your profile reflects how you identify yourself in your portfolio, on your website, and in person.

Theme Color: The theme color you set on your Twitter profile should match your brand identity that you use on your business cards, stationery, website, etc.

Profile & Cover Images: The images you use for your account should show who you are and the type of work you do. For the profile picture, use a professional headshot or your logo. The cover photo should be an example of your strongest work and lure viewers to stay on your profile and look around. As you integrate new photos in your portfolio, you can refresh your cover image to keep your profile interesting and be reflective of your recent work.

Bio: Keep the bio on your profile concise, to match Twitter’s style. This can be a trimmed down version of the one on your website, or you can write a new one that shows a little more personality. Either way, you should customize your bio for the type of profile you want to have on Twitter. If you want your account to show off who you are and what people can expect when they work with you, keep it light, humorous, and full of personality. If you want to use Twitter as an extension of your portfolio and keep it strictly about the imagery, then make your bio more professional and simple.

“Agency Producers are the new Art Buyers and are who you want to connect with via social channels such as Twitter … Use Twitter to let your work and personality breathe, this is why agencies hire you.” 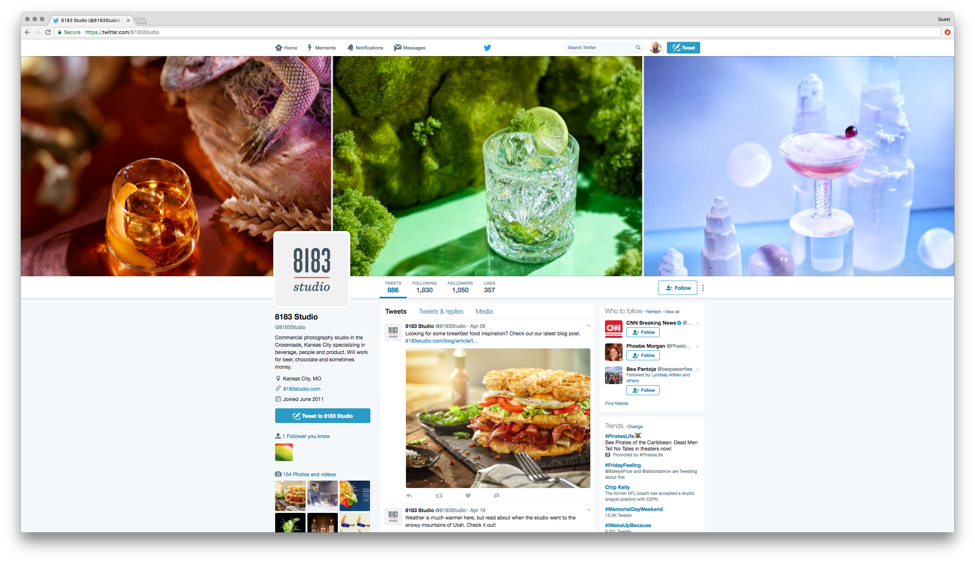 With only 140 characters of text, you have to be concise. Twitter has made some updates so that URLs account for fewer characters than they did in the past, which makes it easier to convey your message. But, don’t forget to leave some space in your tweet for relevant hashtags!

Using hashtags is a great way to attract viewers to your profile, and ultimately to your website. Here are three rules to keep in mind when adding hashtags to your posts:

If you’re using Twitter for personal reasons, then feel free to follow whoever you want and retweet anything you find relevant or humorous. But it’s important to keep those practices separate from your professional Twitter account. Similarly to other social media accounts, who you follow can have a huge impact on your own following and on your reputation on Twitter. You want to make sure you’re following people or companies that you’ve worked with, have a connection with, those you admire, those whose content you enjoy viewing, and those you hope to work with in the future. Think of this as a networking tool – the minute you follow someone, they’re inclined to come look at your profile and if you’re in the same industry, they’ll likely follow you back.

Keep in mind that there are limitations on the number of users Twitter allows you to follow. Once you reach 5000, you get cut off and then have to go through the painful process of weeding out your list. It’s much easier to make sure you’re following the most relevant accounts first!

If you recently worked on a big project and you want to give it a larger amount of exposure, you can post a tweet and then pin it to your profile. Pinning a tweet means that it will stay at the top of your profile, even as you add new tweets. This can be a great tool to showcase a particular project, while still tweeting daily to maintain your following and attract new viewers. 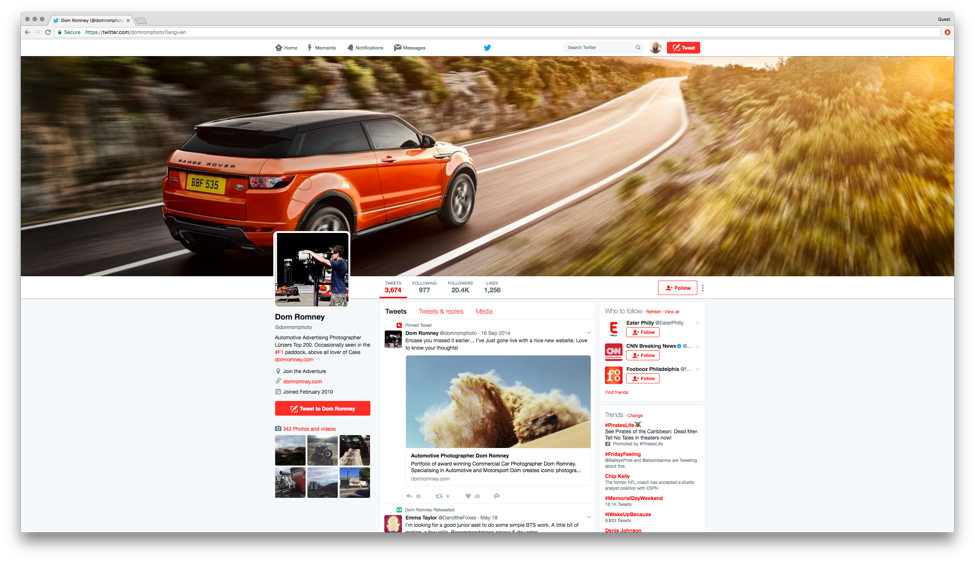 Whenever you “like” another tweet, it gets saved on your profile under a tab called Likes. Think of likes as more than just literally enjoying a tweet, but rather a way of “saving” important information you might want to refer to later. There are two main ways you should be thinking of Likes.

Likes are public, so make sure you’re careful about how you use this feature. You should like things that are relevant to your brand, tweets written by people that you want to follow you, important news. Because this is visible on your profile, you want to make sure you’re not liking everything under the sun, and that you utilize this function as a continuation of your brand.

You can also use likes as a way of building a reference list. Like tweets that are written by potential prospects, feature an upcoming project you want to take part in, or showcase creative ideas you might want to call on in the future. You should definitely like any positive tweets that someone has written about you. That way, you can both demonstrate your appreciation for the kind words and also keep track of favorable engagement.

While Twitter hasn’t always been the most photo friendly, recent changes to the platform have made it easier to showcase your images. In the past, pictures took up a portion of the word count allotted, and at 140 characters, that was pretty detrimental. Images in Twitter were also previously cropped so they could fit comfortably in the feed, and you could only share one at a time. Oftentimes, photographers will link their Instagram to their Twitter and share pictures that way. The problem with this approach is that the viewer doesn’t see the image, just a URL and hashtags. It would be better to share any images directly on Twitter, as a Hubspot survey showed that:

A 2016 HubSpot blog post also talks about some of the ways Twitter has updated its platform to better accommodate images. Here are a few ways Twitter has improved to better serve photographers who want to include photos in their tweets: 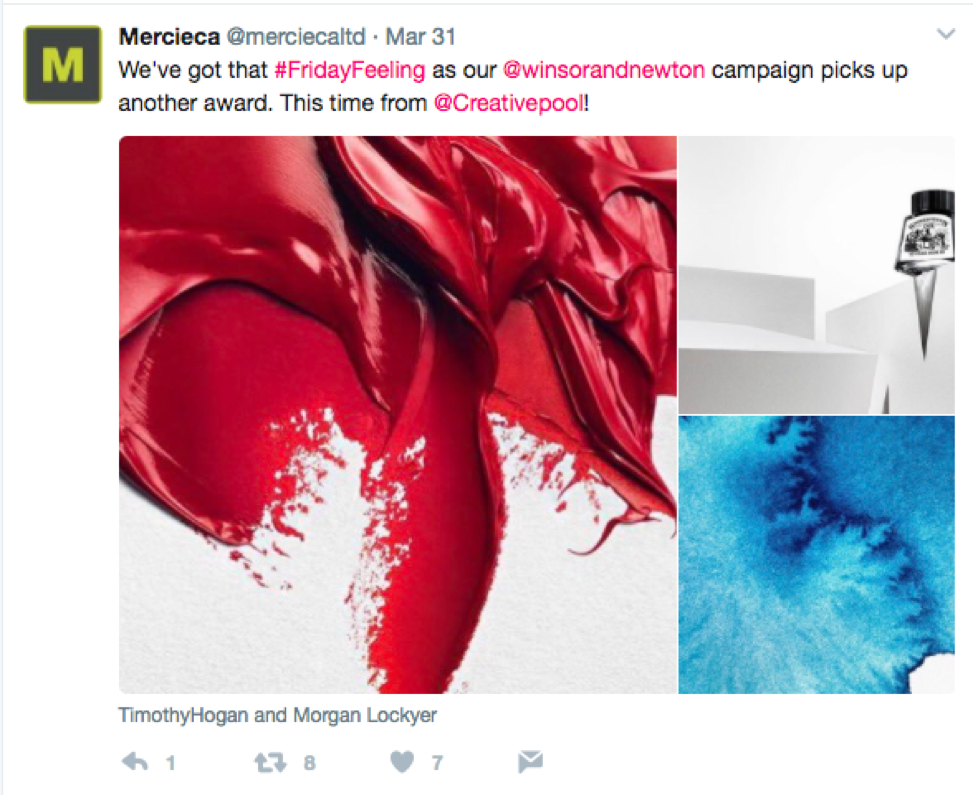 Mercieca tweets about a Timothy Hogan and Morgan Lockyer shoot for Winsor and Newton, featuring three images from the campaign.

Once you’re comfortable with Twitter, there are a few steps you can take to make the most out of your account.

Lists are an organizational tool on Twitter where you can neatly categorize who you’re following by subject, organization, etc. More importantly for photographers, you can create lists for Brands, Agencies, and Publications. Then you can add people/groups/organizations into these lists as appropriate. This is useful for keeping track of the kinds of tweets these prospects post, retweet, and like, making it easier for you to track what they’re focusing on and tailor your tweets accordingly.

You can also use lists to follow other photographers that shoot the same specialties as you in order to keep tabs on the competition. You can use lists for people that inspire you. You can build a list of people you’ve worked with in the past and stay up-to-date on their activities. Essentially, there’s no limit to who you put in a list and what the list is about.

Lists do default to public, so everyone can see what lists you have created and who is included in them, but you do have the option to make them private (which might be a good idea for your prospective client lists). When you add someone to a public list, they will get notified and likewise, if someone adds you to their list you will also get notified. This is a great feature because you can see how you’re being categorized and you can make connections with the people that have added you to their lists.

It’s also not a terrible idea to look at the lists your prospective clients, competitors, or peers have created so you can see what types of topics/people they’re interested in following. 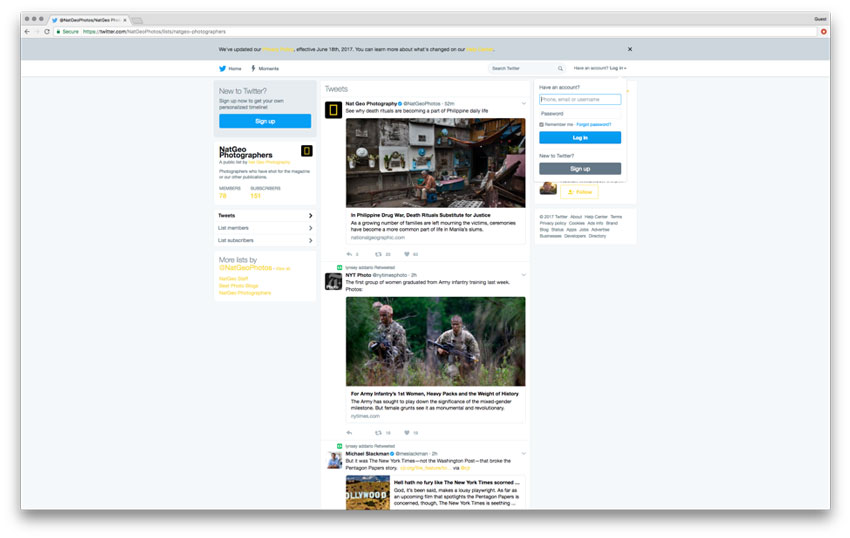 On Twitter’s homepage, you’ll see a Trends menu. This menu includes the top 10 topics and hashtags that are popular that day. Keep in mind that trends are tailored for you, based on who you follow and your location. Trends is a terrific tool to use when coming up with a new Tweet because you know that hashtag has a substantial following. So, as an example, if you see that #MemorialDayWeekend is trending, it’s probably a good time to post a Memorial Day related image and use that hashtag. That way, people who are searching for tweets with that hashtag will find you and your photo. Trends are ever-changing, so it’s a good idea to keep on top of this. And be sure not to force anything; you want viewers, but more importantly, you want to be re-tweeted, you want relevant likes, and you want to retain followers.

“Posting from Instagram just adds a link to your Tweet so I prefer to post pictures directly onto Twitter with a quick caption featuring prominent hashtags that are currently trending, such as Oscar winners or Harrison Ford crashing a plane … Again.” 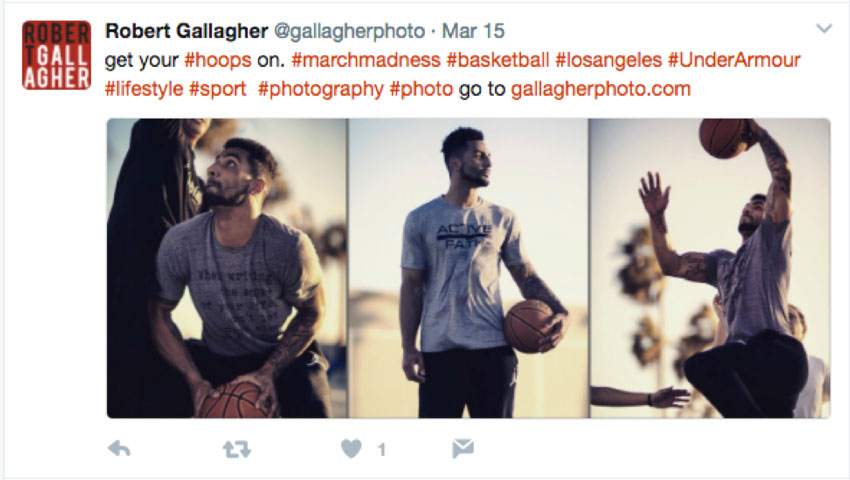 An example of a trends-based tweet for March Madness by photographer Robert Gallagher.

Twitter Analytics is a free tool that allows you to see Tweet Impressions, Profile Visits, and Follower trends easily over time. You can also view the top tweet and top mention for each month. This tool is useful for tracking followers gained and lost, seeing if your tweets are making an impression, and taking note of which ones really stood out. That way, you can learn how to improve over time. 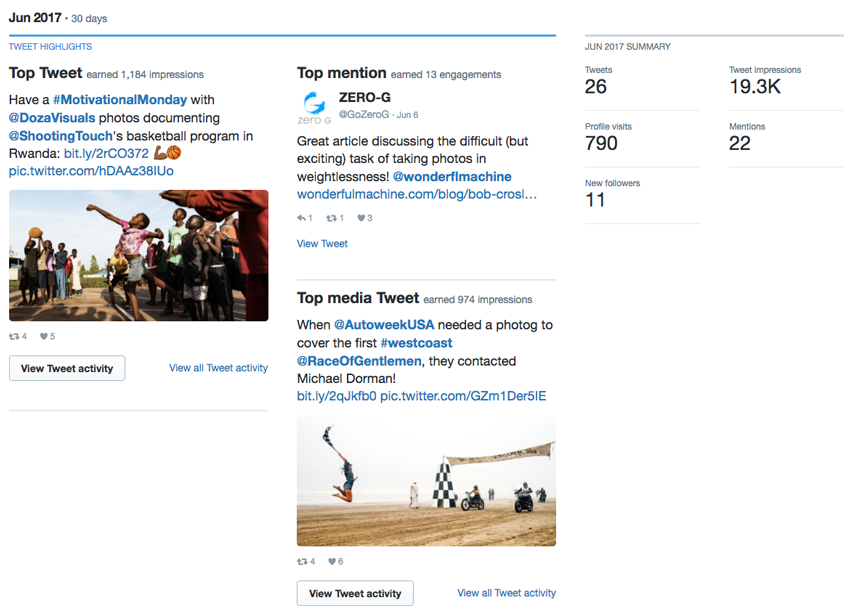 Twitter also offers Twitter Flight School, which is a free course that helps you understand all of the features at your disposal. It’ll help you study Twitter Analytics to make sure you’re getting the most out of your account, and guide you in your quest to conquer the Twitterverse!

The Art of the Personal Project: Anderson Smith's Father