“If you build it, they will come.”

Has such a line ever been uttered in the history of cinema?

How is it possible that one tiny part of an 80’s baseball movie, (when no one even cares about baseball anymore,) could have become a mantra for so many varied things in the ensuing decades.

Sure, “Field of Dreams” had both James Earl Jones and a peak hotness Kevin Costner, but I’d argue that one line is more meaningful than the plot of the entire film.

Ghosts coming back to play baseball?
Sorry.
Not remotely plausible.

But that one line, rather than just being a movie quote that nerds like to bandy about, is a philosophical conceit that can apply to life itself, industry, creativity, you name it. (For pure quotability, it’s always “Caddyshack.”)

If you build it, they will come presents the idea that sometimes, you have to commit to something before you know if it will work. Or even ever come to exist.

It’s like, are you the kind of person who would move to a new city without a house or a job, or does that seem unimaginable to you?

Are you willing to self-finance your next photo project, because you believe in yourself, or do you only do something once the funding is in place first? (Grant, commission, sales, whatnot.)

I’m thinking of such things, having recently returned home from the New York Portfolio Review, which is produced by the New York Times Lens blog, and is held each April at the CUNY Graduate School of Journalism, just up the block from the Times Building, near Times Square. (Shout out to the excellent CUNY hosts.)

I’m going to write about the best work I saw in the coming weeks, but straight off, I have to tell you guys that in a day and a half, I was able to look at work from photographers on five Continents.

That’s all of humanity, save for Australia.

I’ve reported here before that James Estrin, David Gonzalez, and the Lens team work very hard to build a diverse event. Their outreach efforts are extensive, and result in the most well-mixed room I’ve ever been in.

It’s like the 7 train of photographic talent, and I actually paid my own way to get there. Because I think it’s that important to get the chance to hear stories from such varied places, filtered through the lens of such capable photographers. (And videographers, these days.)

The review is free, and the NYT carries serious weight, so you get people applying from everywhere, and even the breadth I encountered was less than in past years, I was told, as multiple photographers had visa issues under the Trump administration.

If you build it, they will come.
You put the intention out there, and see what follows.

I’ve told you guys many times that this column is now user-supported. What I get, I can write about.

And I recently lamented that so much of the column had been about historical projects or heavy political issues of late. I practically begged for someone to send me the kind of thing I often got at photo-eye.

Self-published, or small batch.
Funny. Absurd. Reacting to life’s surreality with a dose of the ridiculous.

And wouldn’t you know it, but “Bruno is a Celebrity,” a new, self-published 2017 offering from Sigrid Ehemann, from Dusseldorf, Germany, turned up in the mail this week.

I’ve been waiting for this for some time now. I love great production values as much as the next guy, and praise them often. But I’m a Marshall McLuhan acolyte at heart. (The medium is the message.)

Some books need to be slick, and some don’t. This one looks like it could have been made at a high end Kinkos. It’s bound like a book report circa 1997, if you were really trying to impress your teacher.

Except for the pink on the cover, which adds a touch of whimsy. (Kooky colors inside too.)

It quickly becomes evident that Bruno is a small dog. I’d call him ugly, but then I know people think chihuahuas are cute too, so I’ll accept he might be adorable.

The book is broken up with text pages, in all caps, that are of-the-moment-critical of our contemporary-digital-narcissistic-Trumptastic-surveillance-state-NOW times.

It’s nominally about Bruno, (also a Sasha Baron Cohen alter ego,) but is really about all of us.

HE BEFRIENDS HIS OWN IMAGES ON TWITTER
HE CURATES HIS OWN BREAKFAST
HE LOVES HIS CHAINS & LEATHER BANDS (Well, that one actually makes sense.)

I could quote most of the text, because it’s funny in the OMG-this-is-actually-happening-kind of way. It’s resigned to our Trumpian moment, but also manages to say Fuck You while still being irreverent.

Other than just being silly pictures of cute, little Bruno, (who has 5,475,127 followers on Instagram,) there are also strange, appropriated-looking images. Like the preacher hands or the celebrity singers.

Others, of dog toys, seem like they could have been shot for this book.

When a man gets to be President who bragged about grabbing women by the pussy, why can’t a photobook say, about a dog, for crying out loud, “Bruno loves to fuck beautiful bitches.”

2017 is definitely that kind of moment.

Later, on another text page, we see

This book is about Bruno.
And it isn’t.
It manages to push ideas, and critique culture, while also having fun in the process. 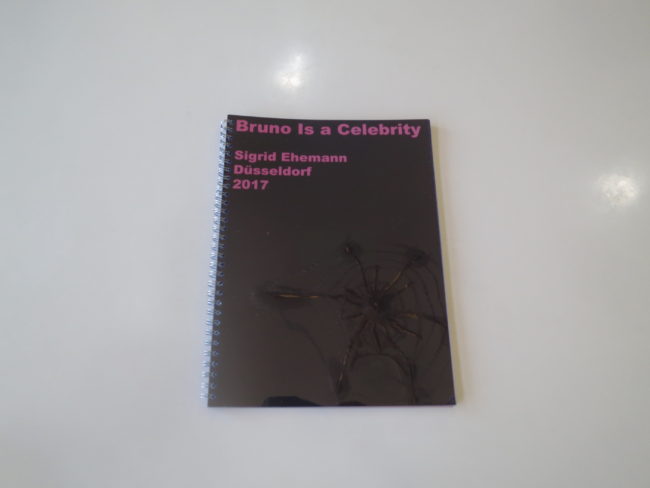 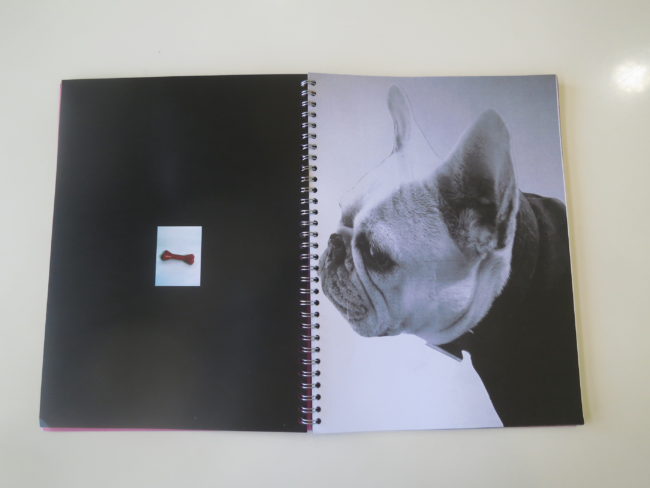 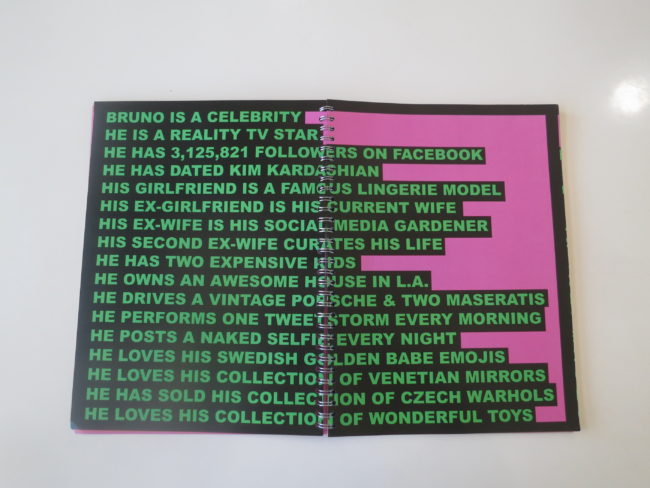 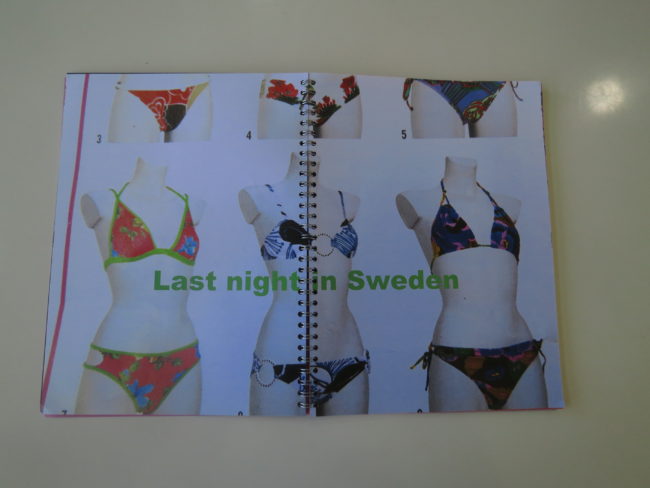 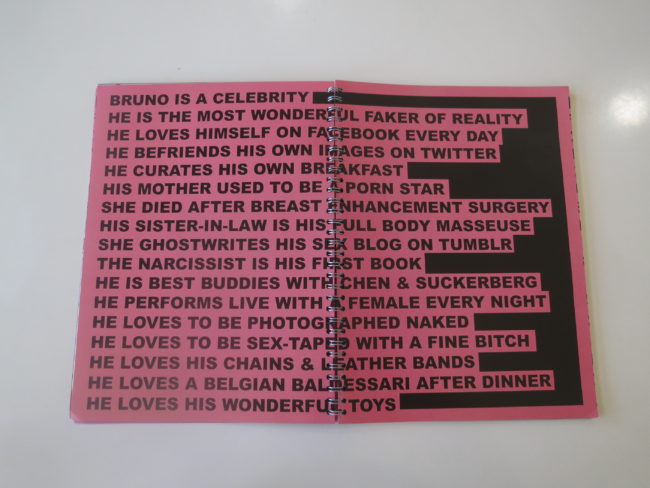 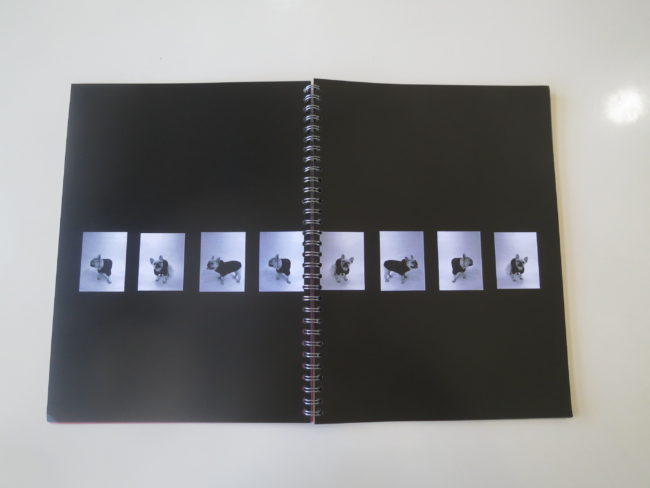 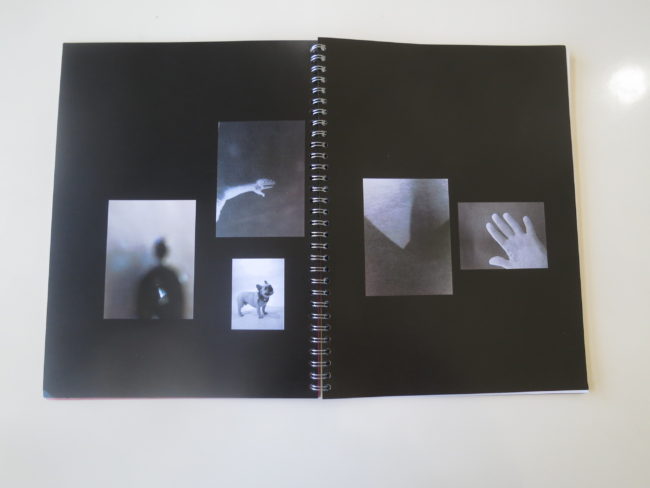 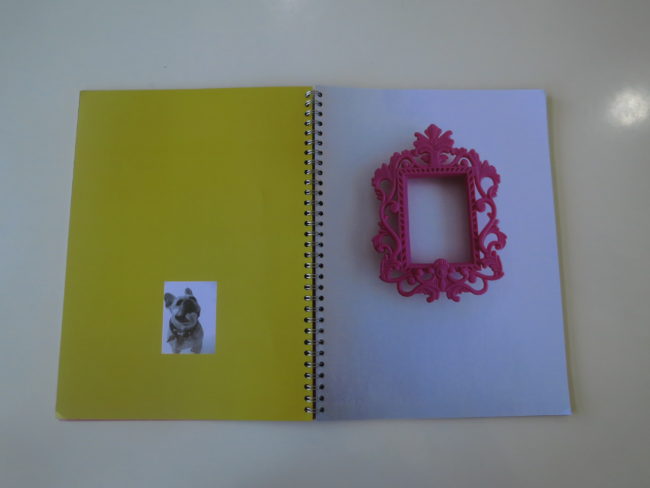 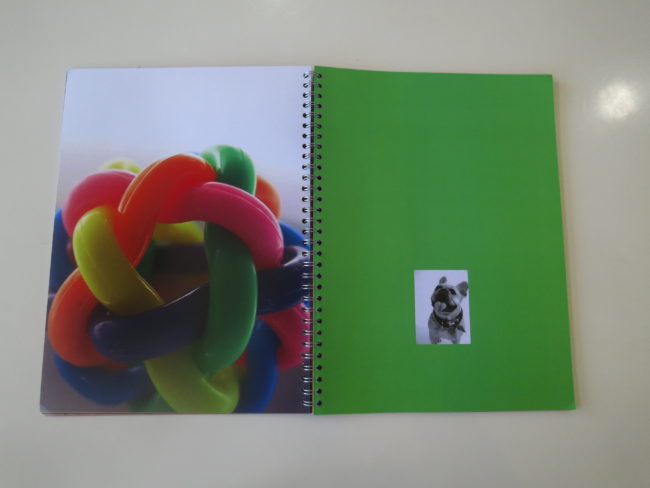 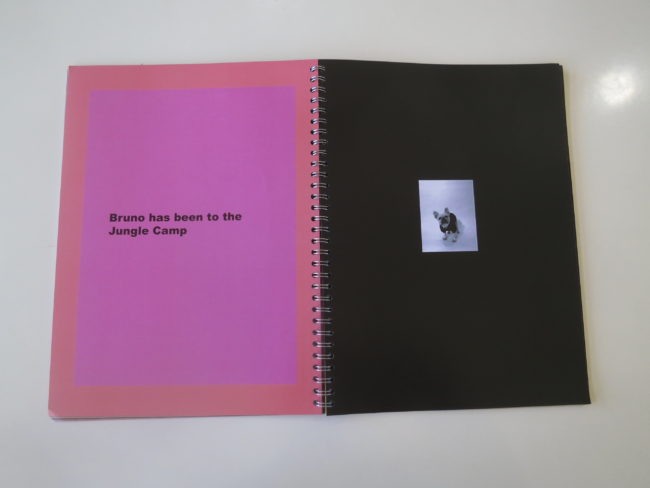 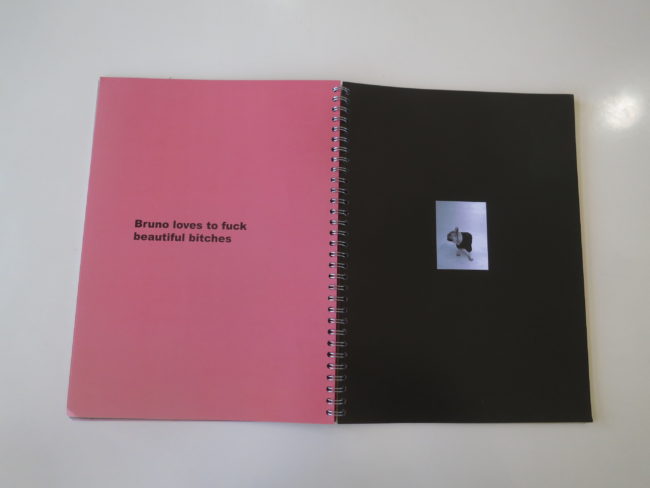 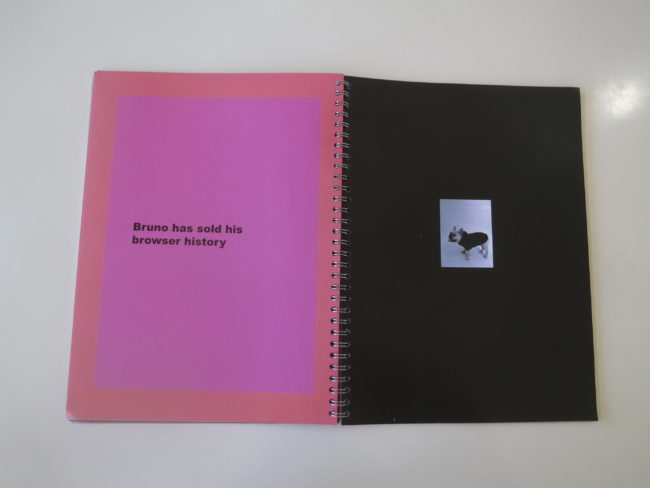 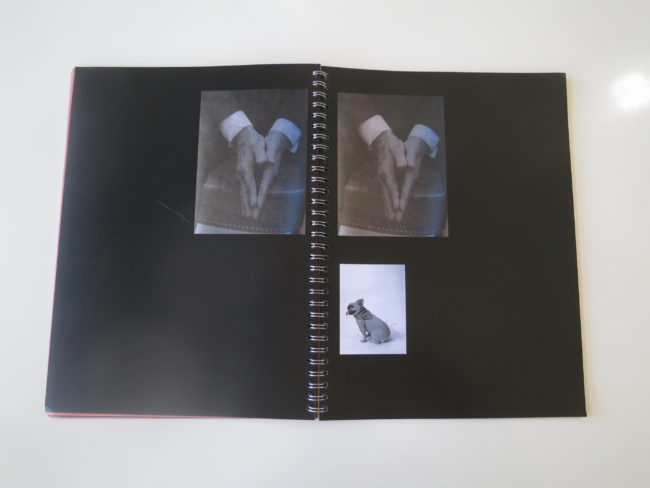 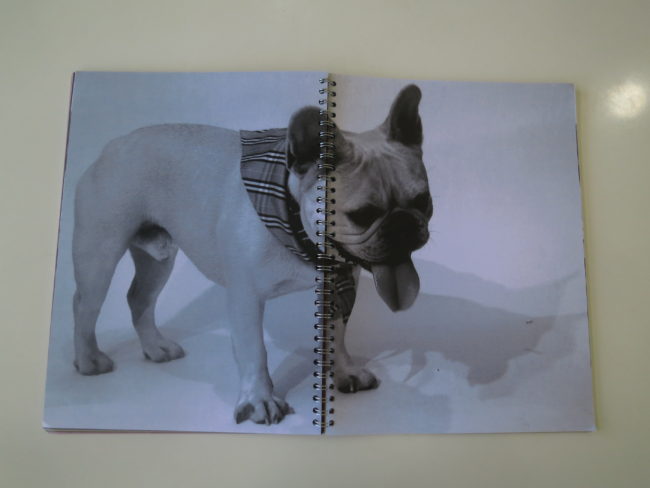 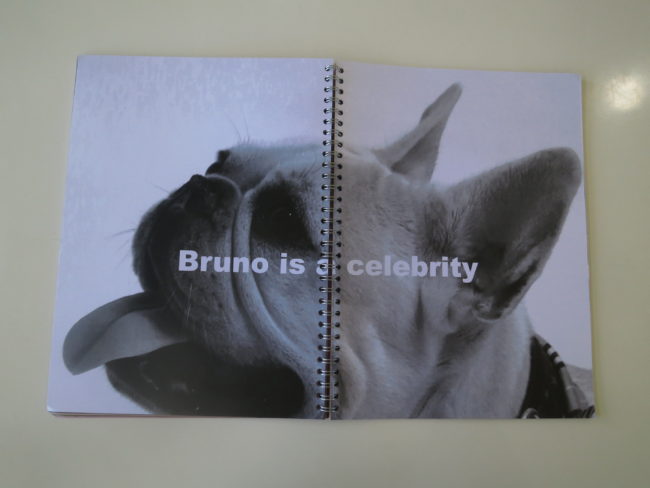 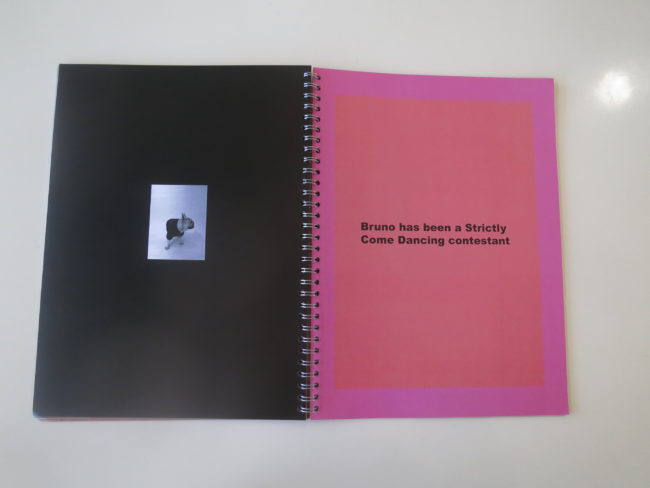 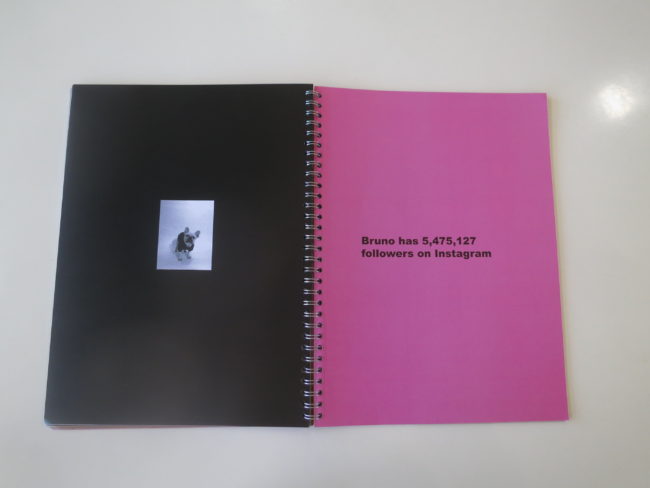 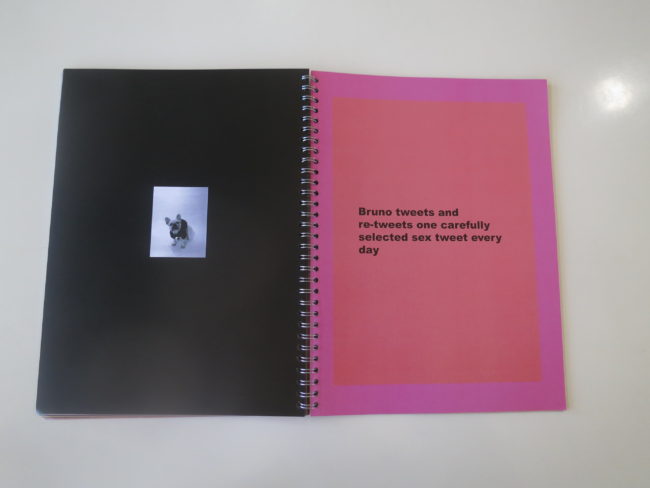 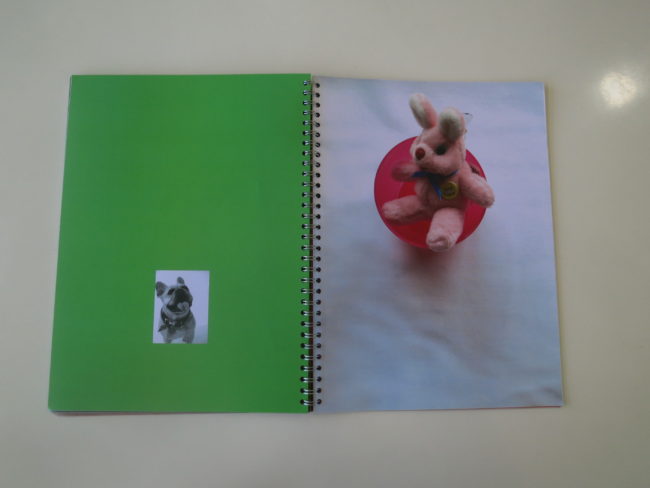 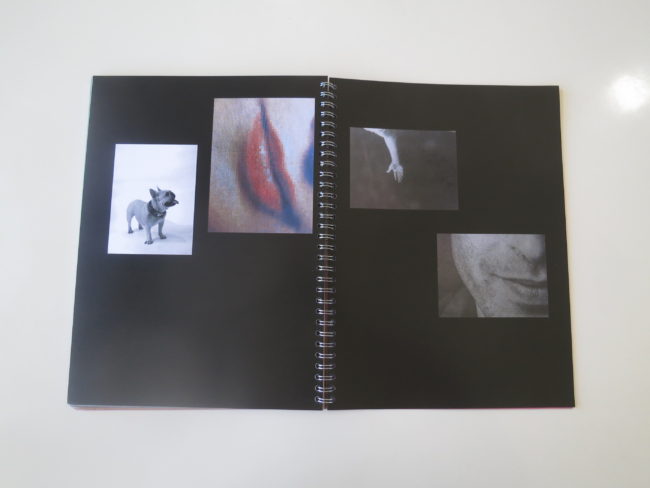 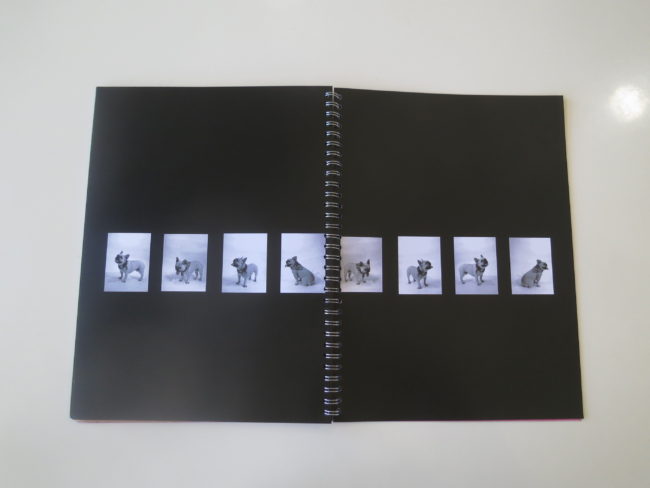 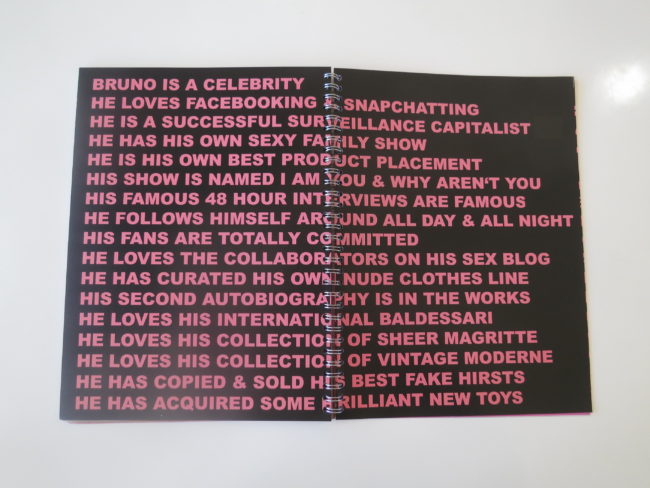 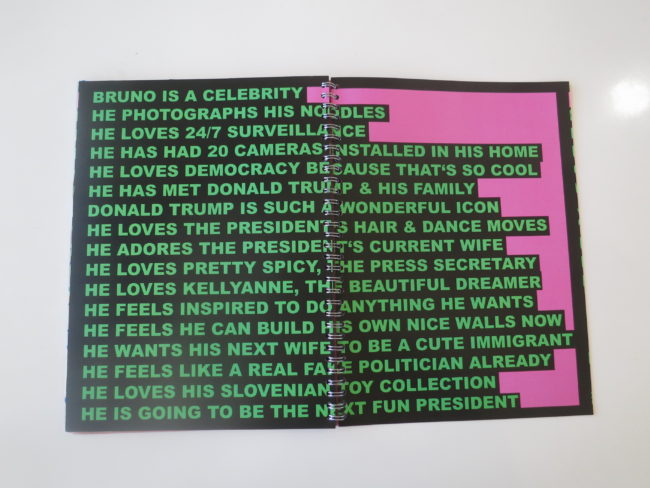 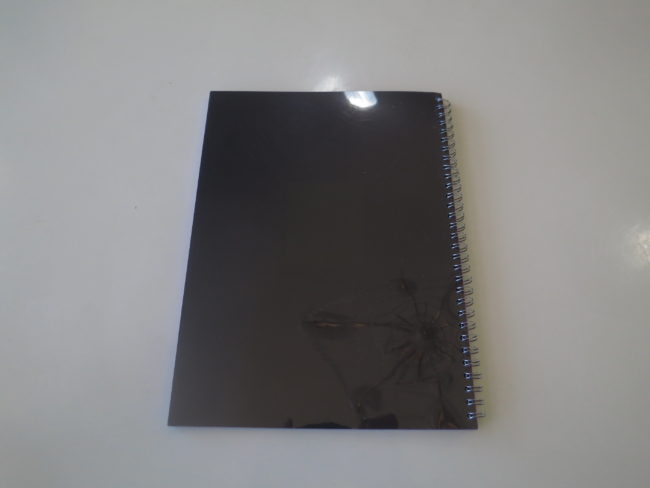