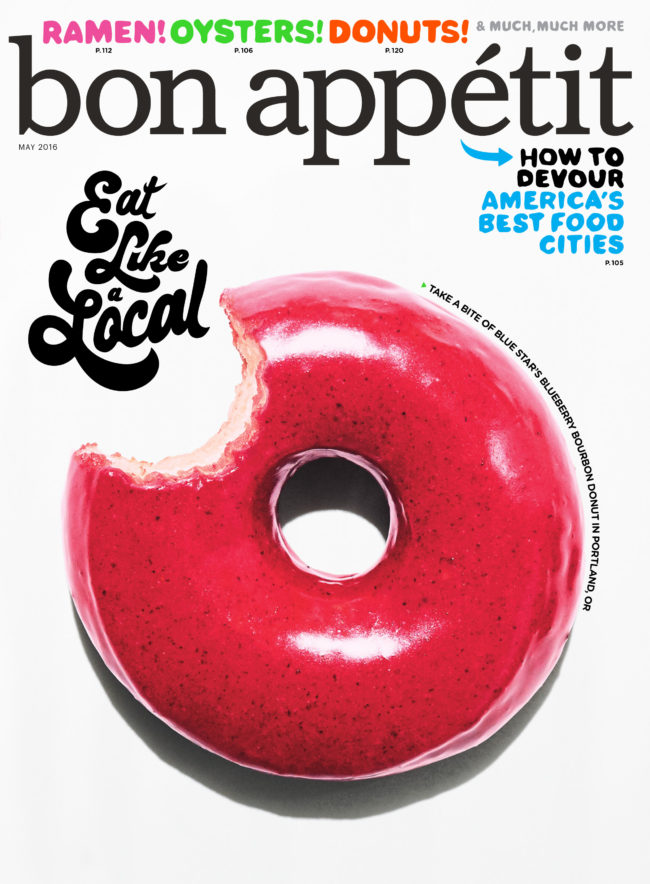 Heidi: How many choices of doughnuts did you go through after arriving at this one?
Alex: I probably went through 9 variations of doughnuts, with about 4 options of each doughnut.

Did you buy a dozen of the same kind of doughnut to avoid denting the icing?
Fortunately, I didn’t have to buy any doughnuts with my own money, but Blue Star was kind enough to give me a fresh doughnut to work with if I had dented or messed up the icing.

Who was the food stylist?
It was a collaborative effort between me and my photo editor Elizabeth Jaime via email! I was in the middle of a multi city shoot, when Elizabeth told me she was adding another shop to my shot list. She had mentioned it was a cover try, and that I should run through as many options as possible. I basically sent her screenshots as I shot, and readjusted based on her comments.

What were the icing or color considerations?
Since it was a cover option, our creative team is always looking for something that pops in terms of color. I was told to look for doughnuts that had a distinct pattern or nice color since it would be featured by itself on white. I had some trouble with the doughnut flavor that I was originally assigned, since the glaze was too glossy for the harsh/poppy light that I was using, so we had to switch to a doughnut with a similar tone, but with a more matte glaze.

Favorite doughnut?
I think my favorite doughnut was definitely the cover doughnut, which is the Blueberry Bourbon Doughnut. I’m not even a fan of doughnuts but had to eat a couple before leaving.