That was the theme of my trip to New Jersey last week: easy breezy.

I drove around a lot, made all the right human and logistical connections, and while the threat of drama is there with all travel these days, for me, for nearly a week, it was all good.

That’s the first point to make.

If you recall, when I traveled in 2021, back to Jersey in May and then to Chicago in October, I reported that people were on edge, ready to blow, and the tension was palpable.

It was no fun at all.

But I’m thrilled to share that in September 2022, it’s gone.

In the security lines, in the airport terminals, on the planes, I noticed nothing but polite, chill behavior.

Such good news that civility has been restored!

When I mentioned drama, it’s just all these stories of air-travel havoc, with delays and missed/cancelled flights.

I did have one 3 hour delay, but thankfully it didn’t mess with my schedule.

It was all smooth that Friday, and my cousins invited me to a big-time High School football game, with a local rivalry, major schools, big plot lines, you name it.

My cousin Stefanie had ordered me a ticket, and sent the .pdf to my phone, plus provided directions to the field, so really, all I had to do was show up.

Watchung Hills Regional High School is coached by Rich Seubert, who won a Super Bowl ring as a starting offensive lineman for the NY Giants.

That makes him as close to local royalty as you’re going to get.

(One step below Bruce Springsteen, obviously.)

His team was at home, playing their rivals from Westfield.

When I got there a few minutes late, (needed to download the day’s photo files onto my iPad in the rental car,) Westfield was already up 7-0.

As to my family involvement, my cousin’s daughter was cheerleading, her son was on the Freshman team, and my other cousin’s step-daughter was in the marching band, playing clarinet.

It was a competitive game, with a lot of turnovers and penalties, and the home crowd, wearing white, was super-loud.

The whole environment felt like being in a movie, replete with an obnoxious, annoying play-by-play announcer, who made me long for noise-cancelling headphones.

(The dude was screaming into the mic the whole game. Enough already, bro.)

But when I looked more carefully, my cousin acknowledged in one direction, the massive Highway 78 was right behind the stand of trees.

(Such a trippy setting.) 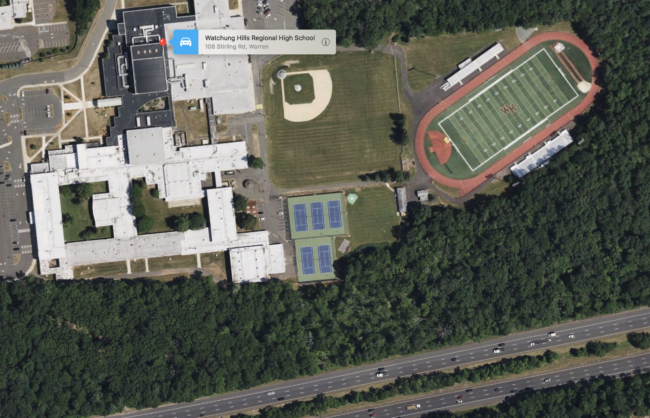 At one point, I noticed one player who was just bigger, and more solidly built than the rest.

My cousin’s friend, Lydia, who was involved with the team, told me it was Rich Seubert’s older son, Hunter, the center, who was destined for major college ball and the NFL.

The kid had a presence.

(Check out these highlights, and you’ll see what I mean. Hunter Seubert is 6′ 260 lbs, and plays with a nasty streak.)

Anyway, Watchung Hills came back and took control, and was winning 17-7 when I left with a few minutes on the clock, to beat the crowds, and the parking-lot-bedlam.

(Pro tip: If you’re not invested in the outcome of the game, time your exit.)

The next night, we stayed in at my cousin Jordan’s, drinking box wine, taking dog walks, watching Ohio State-Notre Dame, and eventually having a big Jersey Chinese feast.

It was almost a sushi night, but I delicately engineered a pivot, and lots of grub from Chengdu 1 Palace arrived.

The highs were high, and the lows were average, but overall I was very impressed.

As to the specifics:

The pork lo mein was greasy, as were the egg rolls.

The General Tsao’s Chicken, which was reputed to be so good that two portions were ordered, was probably the best I’ve had.

The boneless spare ribs were also perfection, and some weird, green, veggie dumplings ended up being amazing, eaten cold later in the evening. (Yes, I had the munchies. Don’t judge.)

On Monday, after the pool party debauchery at my Aunt and Uncle’s place, I woke up early.

Before anyone, before 7am, and I headed out to do laps around the neighborhood.

Two miles of walking before 8, just me and the neighborhood deer, was a must, as was blowing off breakfast.

I game-planned to hit the beach, asking my Aunt, (a Jersey Shore girl, and known perfectionist,) where she would go?

But I chose Sea Bright, the closest beach to my childhood home.

Growing up, we hung out from Sandy Hook to Long Branch, which are the northern-most coastal beaches.

Sandy Hook and Sea Bright are where the NYC shipping channel harbor opens up, so the water is not nearly as clean.

As I got in the car, though, I called my other cousin, (on the Blaustein side,) as he lives 4 long-blocks from the beach in Belmar.

It was only five minutes extra in the car from where I was staying, and he was around, so I turned the car and changed the plan.

Luckily, Belmar is further South from NYC, so the water is clean and clear. 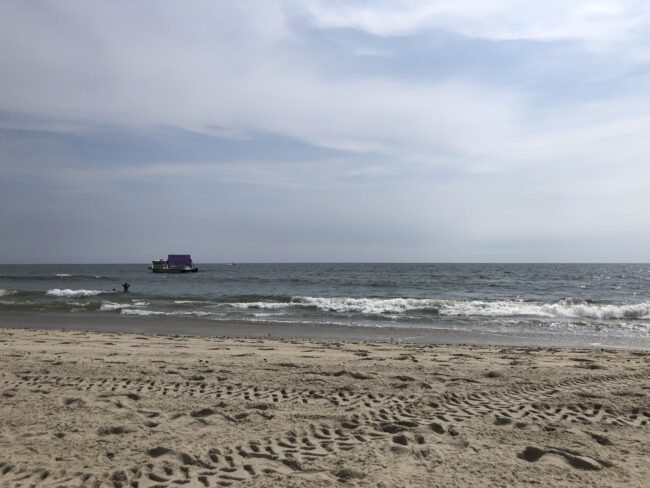 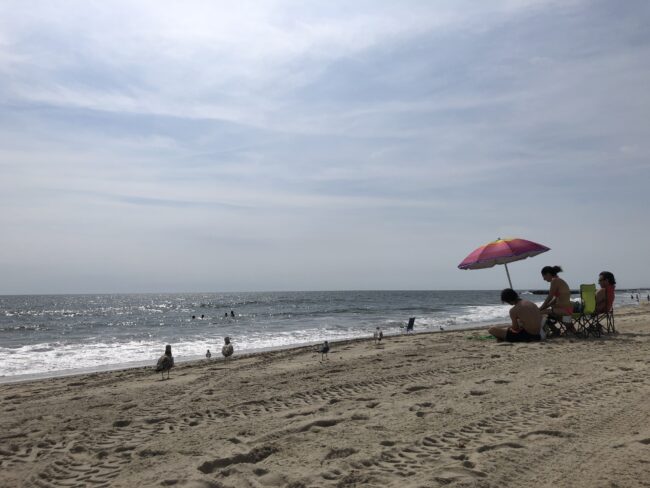 (Not blue, though, as it’s the Atlantic.)

Jeff and I chilled out on the 10th Avenue beach, in fold-up-chairs, taking the sun, and I swam twice.

The water was gorgeous and refreshing, and I’d been waiting for that moment for three years.

As it was Monday, Labor Day, and the direct sun was intermittent, the beach had plenty of people, but was far from mobbed.

We walked up to the street and got pizza at J’s, and the slices were massive.

The young woman behind the counter was pretty, and had what sounded like a cool French accent, but by Monday I was punch-drunk, so I couldn’t be sure.

She confirmed she was from Strasbourg, and I dropped a few words of French to be polite.

Which was a huge mistake.

I got distracted, and the slices were just so big, ($7/piece with toppings,) so I did my usual thing of asking her not to warm them up in the oven, which kills the flavor.

(Room-temperature-to-warm is much better than reheated.)

She said they were warm, but trust me, they were not warm. So I spent $15 on cold, chalky pizza, but having skipped breakfast, I ate them anyway.

As to the area itself, North Belmar, (a half mile away from Avon, my Aunt’s preferred spot,) is not only pretty, chill and friendly, but it’s steeped in Jersey history.

My cousin lived in Freehold for decades, where Bruce Springsteen was from, and confirmed that part of Belmar was the closest spot he could reach.

It’s where Bruce had come, as a youth, before he got into the neighboring Asbury Park scene.

My cousin lives on 10th Avenue, near E Street.

The tour groups show up now, he told me, because the E Street Band, and “10th Avenue Freezeout,” are part of the Legend of Bruce.

Belmar Beach
4 out of 4 Stars

Later on Monday, I had a precious evening to myself, and a good rental car.

After visiting briefly with my friend Mandi, in her creepy/lovely, ghost-ridden, 1750 farmhouse, it was time to make the most of the luxury.

Given how much I love the Jersey Shore, I used that free time to go back to the beach again for a stroll.

Sea Bright is the first beach town facing East on the open ocean, (instead of North, along the Bay,) and I used to work in restaurants there when I was in college.

Much of it was leveled by Superstorm Sandy in 2012, so the town beach’s infrastructure was very new, which was a trip.

Then I approached the ocean.

There was a line of super-tanker ships, launching East towards Europe, and I was glad I’d gone to Belmar to swim earlier.

I took this video for you, as it’s clear how different the ocean vibe is from the Big Blue Pacific I showed you, in San Diego, earlier this year.

It feels like you’re looking across the pond towards Ireland, that rainy green Isle, rather than Asia, a half a world away. 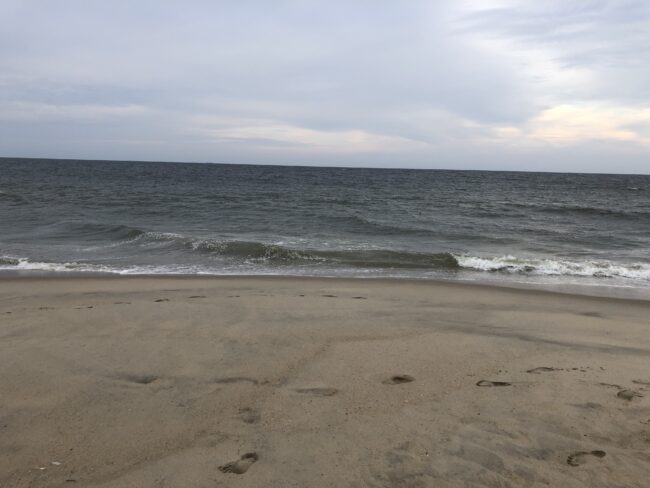 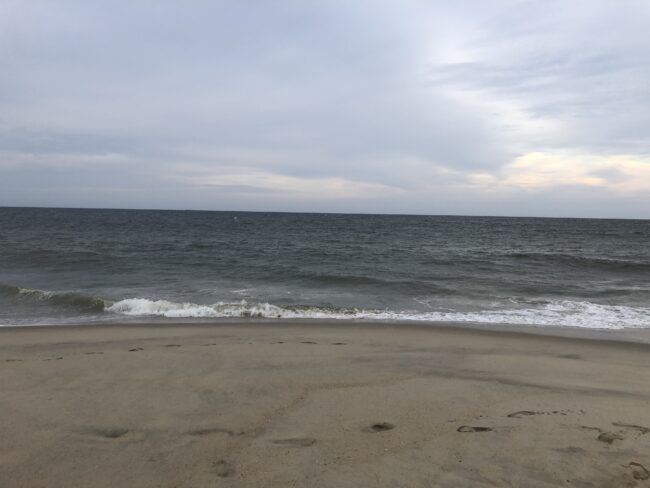 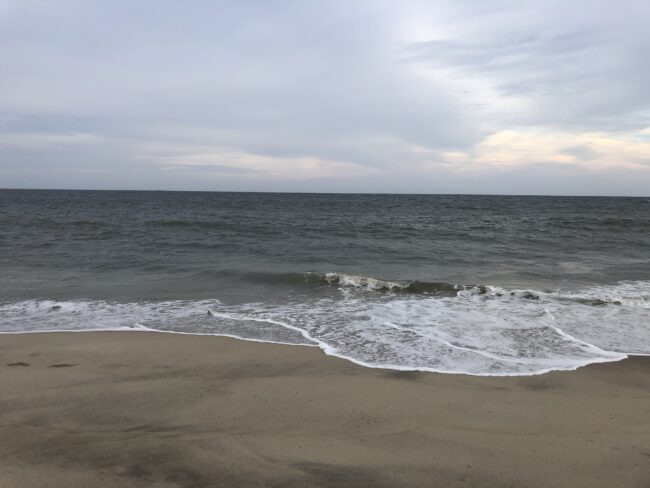 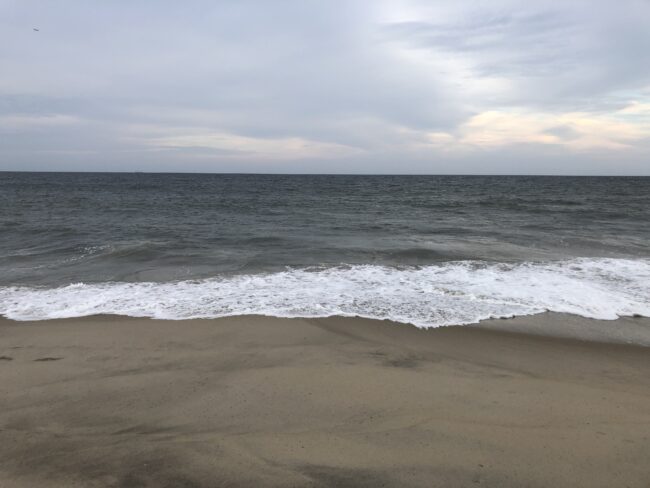 I began the column by saying everything went smoothly last week.

But I did make one additional mistake.

I never should have eaten both of those mega-slices of cold pizza in Belmar.

By evening, in Sea Bright, all I wanted was a salad.

But you can’t eat salad on your last night in Jersey, can you?

After Sea Bright, I drove north to Long Branch, feeling the ocean breeze through the open car window, and then doubled back through Sea Bright, Rumson, Fair Haven, Little Silver, Red Bank, and finally Middletown.

Rt 35 was my jam, growing up, the perfect North-South highway, stuffed with forest trees and endless strip malls.

All that good food, and local businesses.

I’d settled on going to Crown Palace, (which I’ve featured here before,) a brilliant local Chinese restaurant, because at least I could get string beans and broccoli with garlic sauce.

That was my big plan, to ask them to mix both veggies together.

Almost as good as a salad.

But my even bigger plan was to pee as soon as I got in the door.

I was not encouraged when I pulled in and there were no cars, but still, I tried the door.

There are trees everywhere, as I keep telling you, and in New Mexico, I’d pee behind a tree, no problem.

I walked around to the side parking lot, trying to find a spot to do just that.

Do they have cameras, I wondered?

Is anyone going to come out and harass me?

I saw the edge of the parking lot ahead, and thought I might be in the clear.

But then I spotted children’s playground equipment behind the business next door.

I held my pee, and that was that.

(No use going to jail for indecent exposure. Man up and hold the pee.)

I know that area like the back of my hand, and headed further up the highway to one of the local pizzerias from when I was a kid.

But I didn’t want pizza.

Or a chicken parm sub.

My insides were sad, from all the heavy food.

I wanted a salad.

And wouldn’t you know it, but I drove by Simply Greek, in the Commons at Holmdel, on my way to Villa Pizza.

It was on the other side of the highway, and had been there for years, so I took the jug handle just up the road, and went back.

(Salad it would be.)

I walked around the parking lot while they made the food, and the dark skies against the electric light was a visual feast.

The staff at Simply Greek were super-nice, and the prices were more-than-fair, by inflationary standards.

So I liked the joint immediately.

I kid you not, the falafel sandwich and a small greek salad, with extra tzatziki, weighed about 5 lbs, and cost $25.

It was easily the best food I had all week.

The summer Jersey tomatoes wanted to sing me a song, they were so happy, and the feta cheese was better than anything that exists in New Mexico. 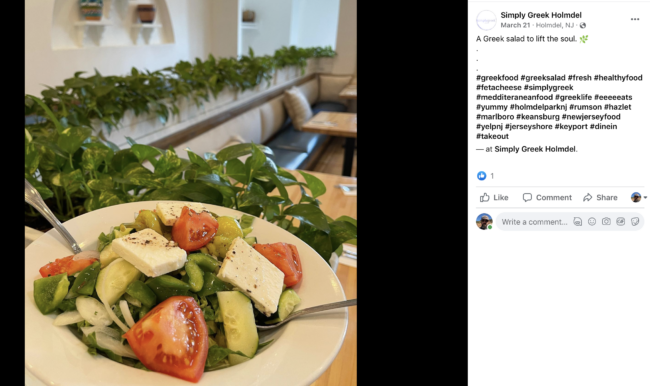 My first travel piece in ages.