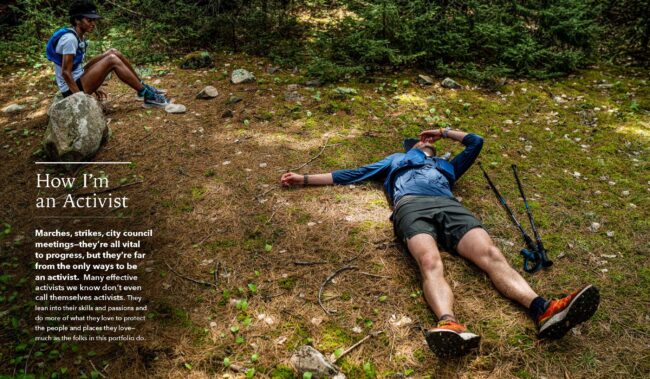 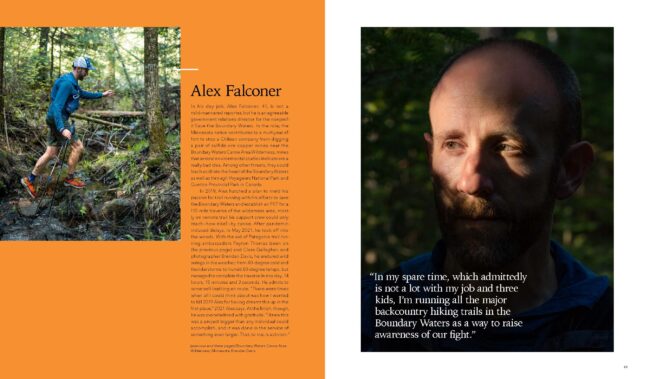 Heidi: The use of natural light for the portrait is striking, how did that come about?
Brendan: This whole run was meant to shed light on the impacts of the potential catastrophe of copper mining in the Boundary Waters. I have gotten to know Alex fairly well over the course of this project and I have become aware that a lot of his life is dedicated to shining light on how amazing the Boundary Waters are to different people, whether it’s doing this run, bringing his kids on canoe trips, or in his work as the government relations director for the Save The Boundary Waters organization. He wants people to feel its importance. I wanted this photo to put the light on Alex and bring the important, yet often quiet, work he is doing out of the shadows.

For this image set Alex completed a 110 mile traverse in wild temperature swings, how much running did you do and what was your approach?
I ended up doing about 46 miles that day. Which is probably close to the longest I have ever gone and definitely the longest I have gone with a camera in my hand. While photographing something like this I find it really important to be with the subject as long as possible. Alex was going 110 miles and moving as fast as he can do that and I didn’t want to slow him down with setting up shots. I took photos stride for stride with him. Often in motion or I’d run up ahead and wait for him to pass. I press the shutter between steps as both feet are off the ground and I am floating for a fraction of a second. In the rare moments of pause, or exhaustion however you might look at it, I’d take notice of how Alex was feeling or how I was feeling and attempt to capture that how ever it may be. I was only doing less than half of the running Alex was doing so when things got hard for me I knew he must be feeling it to. Running and feeling it all with him I am able to get as close to the experience as possible leaving very little room for over romanticizing anything.

What was the biggest challenge for this shoot?
Well, I think just running 46 miles is hard. The trail is grueling with constantly going up and down or making windy turns. There is a reason most people experience the Boundary Waters by canoe instead of on foot.

It was hard to focus on making sure Alex was moving along the way he needed to be, taking photos on assignment, and taking care of myself all at the same time. Something had to fail a little bit. On the day of the run temps got up into the 80s with very noticeable humidity. Early on in the run I had thought there would be more opportunities for water refills and  I drank my two flasks early and was left with no water for about 2-3 hours. Eventually, I got what I needed, but my body was already going through the motions of crazy dehydration and the water consumed couldn’t catch up fast enough. Which culminated in my quads locking up rather intensely at mile 26. So intensely that it looked like there was a softball about to burst out of my muscle. It was so painful I actually fell to the ground and then threw up. This put me in a strange place because we were really far out there and obviously I was not going to ask Alex to wait for me. The only way out was the 20 miles of trail ahead of us, the 26 miles behind us, or hitch a ride on a canoe.  Alex and Clare Gallagher, another runner helping pace and crew, kept going ahead as I figured out how to get my legs moving again. Before Clare left me she shared some salt pills and said see you later.  I envisioned all the possible scenarios, the worst being that I would just sit there in the middle of the trail unable to move for hours in the middle of the incoming storm. Thankfully I got moving again and caught back up to Clare and Alex as they stopped to refuel with friends who had canoed in the day earlier.

How much planning goes into a project like this, since you’re working with multiple people, one being mother nature?
No matter how much planning is done, while documenting an adventure there is always some acceptance of chaos. I am able to control the gear I bring, the amount of training I do beforehand, study maps, set visual goals, and just expect it to be hard.

Logistically, this sort of trip has so many moving parts so everyone needs to know they can trust each other to be organized and situationally aware to keep each other safe. Nature is rapidly changing in the spring and obviously not able to be controlled so we did what we could to prepare.

Thankfully, Alex is a master planner. He had multiple spreadsheets, the whole map labeled with mileage markers, and had coordinated with friends and family on where they had to be, and how they would get there. Which sometimes involved canoes. There were a few other runners who helped support him on the trail by keeping him company and making sure he was eating, drinking, and moving properly.

You’re known as a high peak runner, how did that translate into this project?
I’m really lucky to live a life that allows me to run in mountains all over the country. I have been running since I was a kid and competed throughout college. A lot of my closest friendsI made friends by running. It’s how I enjoy spending time and I owe a lot to the people and places I have shared miles with. Running has been a deeply important part of my life and I am grateful to be able to join people like Alex who also see running as something greater than logging miles.

It is easy to hear about someone doing a 110 mile run and understand that it is a difficult task. I like to think that being a runner myself and understanding the nuances in the process of even simply trying to accomplish something like this helps me know where to look for meaningful moments during the physical and mental highs and lows.

What have you been working on recently?
I am just finishing up a multimedia project called “Home 2 Home” with fellow photographers Forest Woodward, Joe Grant and musician Christopher Parker. A couple years ago Joe ran the entire 500 miles of the Colorado trail and we all photographed the experience on 35mm and 16mm film. The culmination of the project is a zine, short film, and an album. It’s all being presented this week at 5Point Film Festival in Carbondale. The whole concept is about home and the humbling and joyous journey of being there. I am really excited about how it all turned out and that we were able to put it in print!