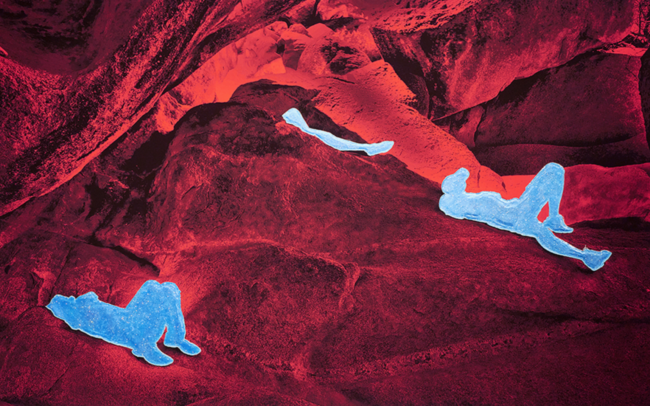 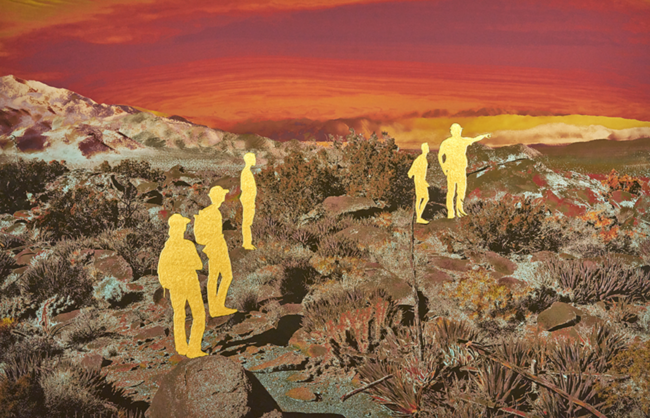 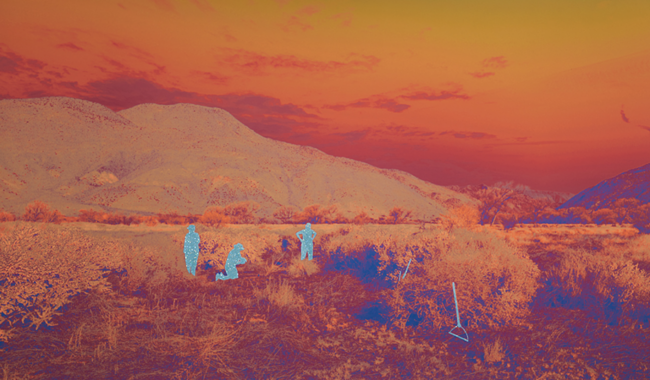 Heidi: You started as a pro skateboard photographer, how did you evolve to landscapes?
John Brinton Hogan: I began my “professional” career photographing skateboarders who represented the manufacturing companies I worked for in the 1980s. In the ensuing years I found myself working as a commercial photographer and later spent more time employed in commercial filmmaking. I never received any formal technical training in photography so I had to learn on the job.

Once I was confident in my abilities, I began to use cameras as tools to investigate the subjects that had always interested me the most: how humans interact with the natural world, the ways in which they use land, and the artistic interpretation of wilderness.

When did you decide to combine illustration and photography?
Due to personal circumstances, I was away from art-making from 2010 through 2013. When I restarted my practice, I realized I was no longer interested in creating “straight” photographic images.

I began to explore the memories of pictures that had affected me emotionally during my boyhood. Some of the illustrations on sci-fi novels and rock album covers were intriguing and scary to me back then.

Once I’d returned the studio, I found myself distorting photos I’d made, rendering them increasingly unrecognizable.  As time went by, I began to experiment with visual adaptations of techniques some audio engineers use in their studio recording work.

Despite spending a great deal of time using image editing programs, I didn’t feel the work was complete until I began adding elements by hand (often by painting or otherwise embellishing the prints). In this way I found I was able to engage with the work physically- which I hadn’t done since my last darkroom days in the 90’s- and something I felt was missing from my process until then.

The past year and half has been full of turmoil, how did that affect your work and or reinforce your notions of extinction?
The period between late 2019 and spring of 2021 was a disaster for me personally. Strangely, the threat of Covid and the chaos of the US political landscape ranked below some other issues that can only describe as harrowing.

A number of people have remarked to me that “the Covid era must have been a productive time for artists.” Perhaps that’s true for some, but I made no work at all during 2020, and have only recently begun to get back into the studio, in late summer of 2021.

Without going into the grim details, life during that time felt like an ultra slow-motion plane crash: riveting and terrifying, with lots of time to ruminate on the mistakes I’d made leading to this moment. Frozen by fear, and powerless to change the aircraft’s trajectory, I was simply a witness to my own demise, observing myself falling, inch by inch, heading toward the dirt.

With regard to notions of extinction, humanity has done very little recently to convince me that it will make any significant efforts to save itself or begin to offer even a modicum of respect to the planet which sustains it. Perhaps, like some type of sentient tumor, humanity is programmed to consume our host, incessantly, until both expire.

For fans of the planet, there may be a type of hope, I suppose… in Abbey’s words: “Men come and go, cities rise and fall, whole civilizations appear and disappear–the earth remains, slightly modified. The earth remains, and the heartbreaking beauty where there are no hearts to break….I sometimes choose to think, no doubt perversely, that man is a dream, thought an illusion, and only rock is real. Rock and sun.”

You used metallic car paint in one work, was that a nod to fossil fuel extraction?
When choosing material for my work, I use what is expedient and will help me create what I’m imagining. I generally don’t choose tools or materials to reference a particular idea, rather, it is my hope that the finished objects will generate a conversation about ideas.

That stated, I do find it somewhat ironic that many “landscape artists” require so many resources in order to make work, that is, in many circumstances, about the ecological impact of unrestrained consumption.

I’m reminded of the story wherein a landscape painter travels by jet to Greenland from California to witness melting glaciers with his own eyes, so he may better paint them in a body of work addressing climate change.

I too am guilty of consuming those same resources. I am conflicted, to be sure. But I continue to carry on, just like the painter with his glaciers.

Which brings me back to the analogy of the plane crash: Frozen by fear, and powerless to change the aircraft’s trajectory, I was simply a witness to my own demise, observing myself falling, inch by inch, heading toward the dirt. 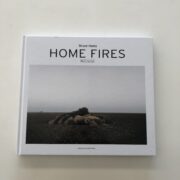 This Week in Photography: Weather Patterns