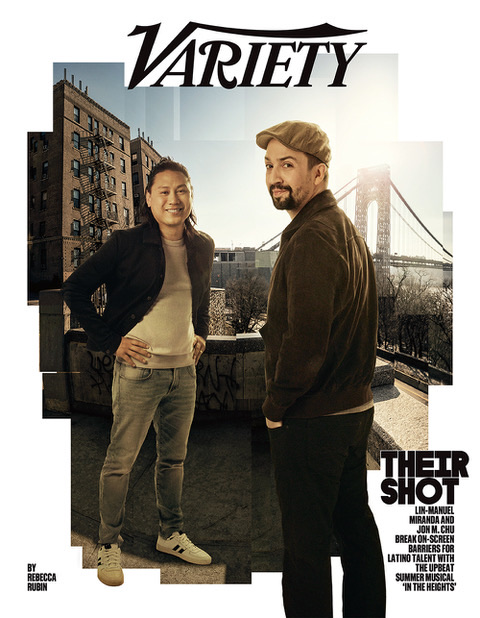 Heidi: Where were both of these subjects located, did you have to go travel to them each time?
Frank: Lin was in NYC and Jon was in LA so I did the photoshoot before and after their interview on zoom. Jon was first and I created a light set up to matched the plates I shot weeks ago in NYC. While the interview was going on I worked with the videographer in NYC, setting the lights in a studio so I could repeat the same lighting with Lin.

How did the idea come about, aside from necessity?
When I was approached about the cover, I was heading to NYC for a job. Since Lin wasn’t available to shoot while I was there, I suggested that I shoot plates up and around Washington heights in a David Hockney style. The request from Jennifer and Raul was to come up with a collage idea that brought them together even though the weren’t.

What motion camera/lens were you using for the motion?
The videographers both use the Canon C200s. The higher quality the capture the better the image. Over Zoom I worked with them setting the lights, then directed both the videographers and subject.

Did you do anything special for shooting off the screen?
My digital tech, Chris Nichols and I tried many different cameras, lenses, monitors, and exposures to come up with the recipe that works. Along the way each failure created interesting outcomes and unusual abstract captures. If I just tell you you’ll miss out on the fun of the creative journey.

Was it an impossible edit?
It’s interesting when capturing images off motion because you can rewind to catch certain subtle things … if they weren’t moving too fast. It’s  interesting to see that moment before they look in the camera, moments that are less guarded or over thought.

What were you looking for in each of the stills for the final select?
I wanted to feel like I’d walked up and found them in conversation.

Was this more intimate?
I have done different approaches to this and it was most intimate when I shot the Chicago 7 cover for The Hollywood Reporter. I sent each actor a light kit and diagram how to set up the lights and then worked with them setting it up and placing the camera.

What other creative solutions have you discovered during COVID?
I have been lucky enough to do several projects on location since all this started. It’s great for a few reasons. One, to see that creatives aren’t letting what’s going on stop them from trying to push on with great key art concepts. Two, the trust they have in me because they cannot be present to execute on their ideas. I believe we must be open to learn new things everyday and must embrace change and the challenge of the moments we are given. This is how we grow.