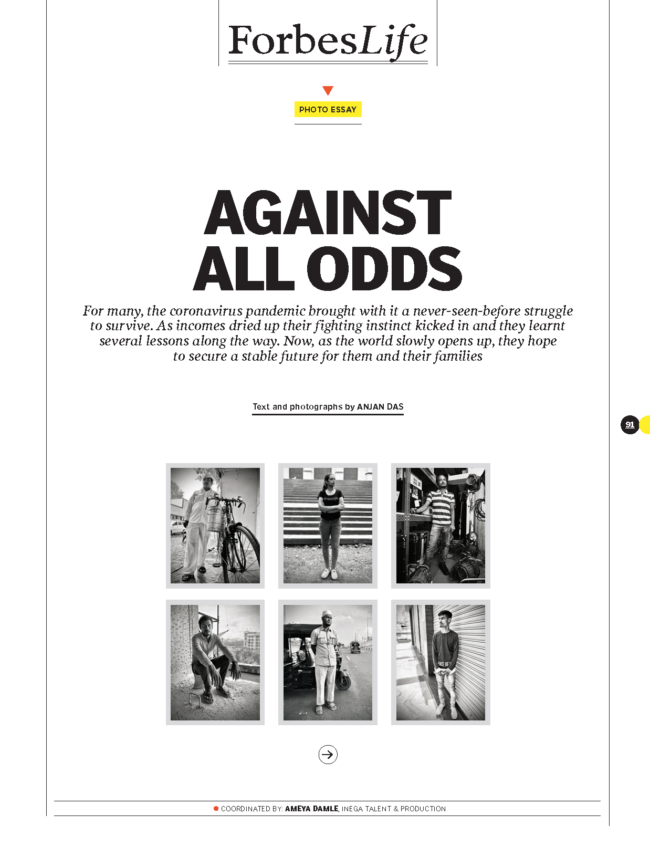 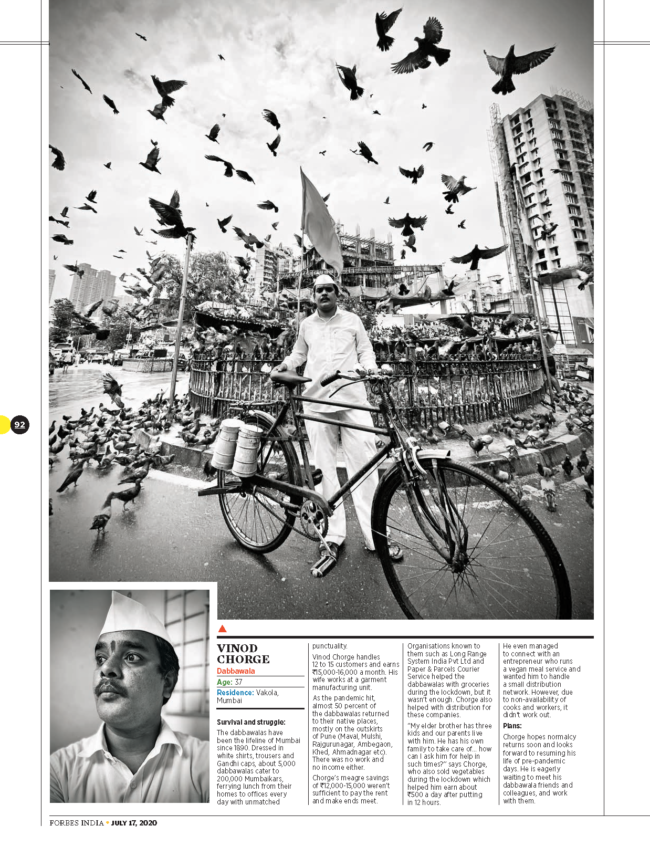 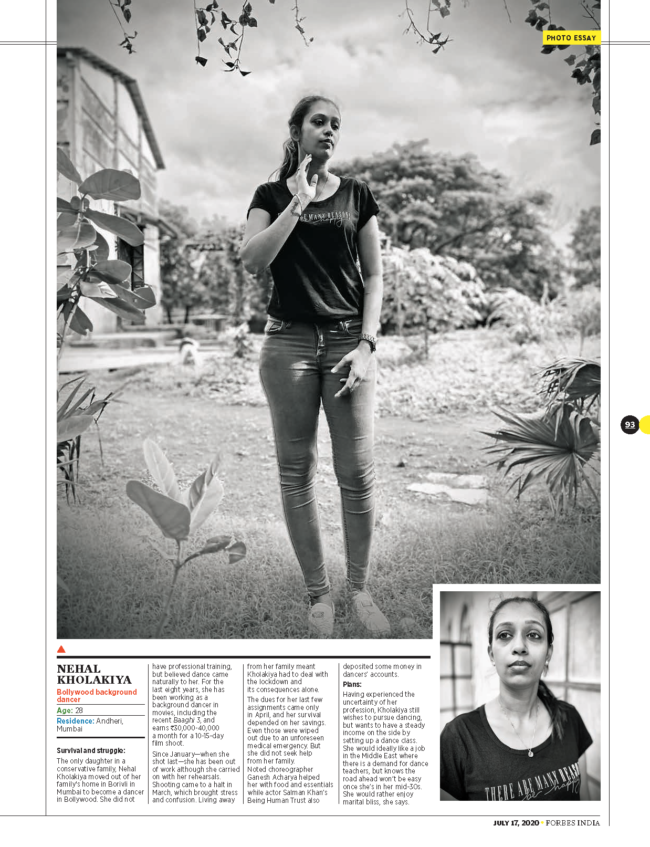 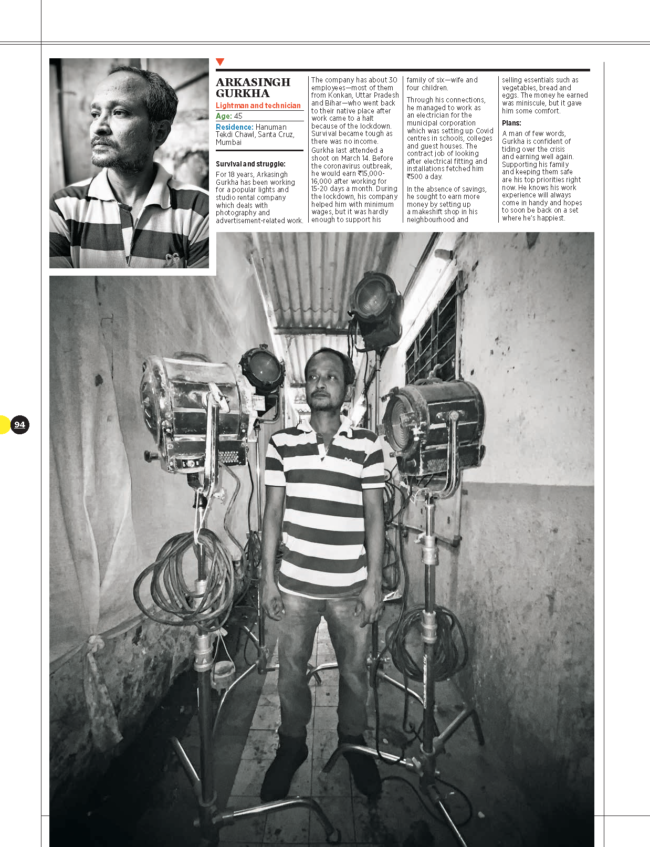 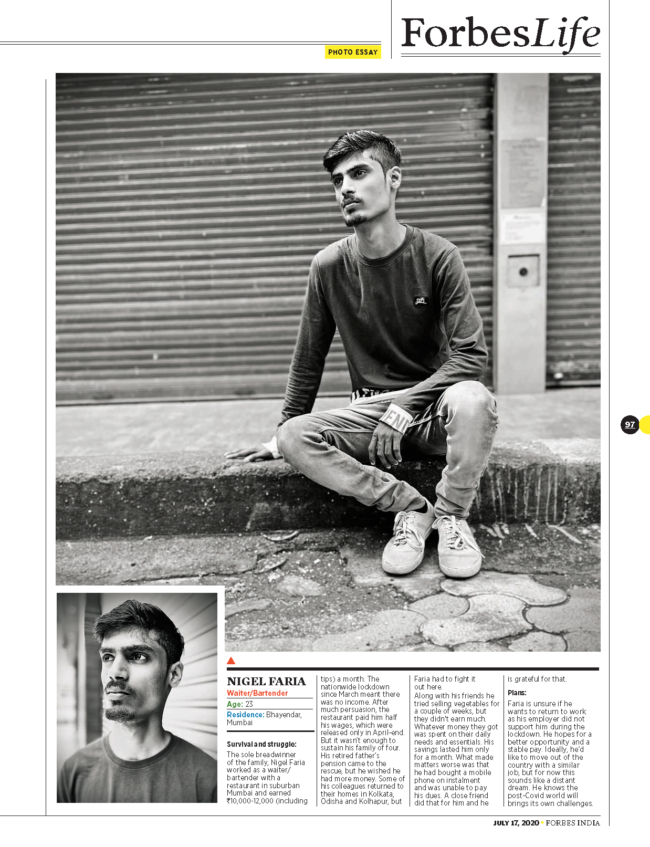 Heidi: Did you shoot and series and then curate this work?
Anjan: I have been brainstorming in my head about this idea (Against all odds), revolving around how the livelihood of people have been affected during this pandemic. How to approach the subjects? What would be that common link/connection? Prepared a storyboard, listed down some professions which were badly hit & people who were associated with it. Started to connect with all of them, followed by brief phone conversations and lining up the shoots at various potential locations in and around the city of Mumbai. The idea was to create a particular style of environmental portraits with interesting backdrops which tells a story.

Pre covid, would you have noticed these people, how do they rise up in your eyes now?
Mumbai is a city of 22 million people, you are bound to come across a lot of people struggling for their livelihood every single day. You’ll most definitely cross paths with many people with their survival stories. The city is brimming with working class people. Majority of that also includes the migrants and daily/weekly wage workers (cabbies/auto rickshaw drivers, construction workers, maisons, plumbers etc.) Each individual has their unique stories to share. While travelling in cabs/auto rickshaws I have heard many such stories of their survival every now and then. When the pandemic hit the urban population in mid march, they were the the first ones whose lives were altered in many ways than one. With no savings at their disposal the ongoing survival and struggle became even more difficult. Making ends meet and taking care of their families and keeping them safe was becoming their single biggest challenge ever. I was truly amazed by their perseverance everyday in surviving the pandemic. While speaking to most of them I sensed a common connection of that fighting spirit, that can do attitude even though their livelihood were at stake with a gloom of uncertainty. There was a spark of positivity in between fear and frustration. There’s nothing they can do but to fight and keep hoping for a light at the end of the tunnel. Each one these brave souls made me realise the ground realities of life and why giving back to the less privileged would be the most humane thing you could have ever imagined doing.

Was it difficult to convince people to be photographed? What did you tell them about this project?
Coordinating the whole thing was a logistical nightmare at some levels, especially reaching out to people during a lockdown was not easy. Thankfully with the help of a close friend who’s a partner with a popular production company here in Mumbai, eased up coordination hugely. With his help we reached out to them and began our conversations explaining to them the crux of the story in which they were going to be featured and shot. It was difficult to convince them at first with few reservations about their struggles and featuring their photographs. We had to go to that extra mile of making them understand how they should portray their struggles & bravery so that it becomes a living example for others to fight the troubled times ahead. We insisted that everyone should know about their survival stories and it cannot happen if they don’t volunteer to be a part of this project. Portraying them as ‘Warriors & survivors’ also helped to ease their reservations. We had to go through this exercise with every individual whom we had to convince with a completely different frame of mind & explanations.

What was the commonality amongst the subjects? I know the theme was everyday heroes.
For this particular photo essay the subject was purely based on ‘Survival during the pandemic’ I had outlined it with various titles namely; ‘An ode to survival’ ‘The lives of others’ Against all odds’ etc. So survival was a common link to all the subjects belonging from various work/professions. While talking to them I figured there was more than just survival spirits. Even through all these hardships no one seemed to give up, they want to fight on, for a better life, for their families and most importantly the pandemic.

Is this an ongoing project?
This was my third photo essay in a row which i have worked on for the last 3 months through the lockdown. The first one was titled ‘Frontline warriors’: It was about people (Doctor, traffic cop, city police force, Bus driver, medical shop owner, veggies & essentials shop owner) who are working tirelessly on the frontline to help others in many ways, the second was titled: ‘Lending a helping hand’;  It was about group/team of people (Teams going out of their way to ensure the smooth functioning of banking, IT and health services). And ‘Against all odds’ is the current one. We have even started a hashtag of #frontlinewarriors where we do a lot of social media posts (single story, photo of the day etc) on everyday covid-19 warriors. There has been a lot of traction on that lately.

How often are you shooting, as your main role at Forbes India is running the show as Creative Director.
Currently I am harnessing the power and potential of iPhone photography and this would be an ongoing process in the months & years to come. I shoot whenever I can and whatever I can. Digital photography has always been my passion but never really managed the time to pursue it fully. These projects were like an eye opener for me, I really felt thrilled, excited and rejuvenated completing these essays successfully and with such moving stories/subjects. The role of Chief Creative Director at Forbes remains unchanged with the workflow of the fortnightly editions back to back, managing deputies, designers, production artists plus off course manning shoots & storyboarding ideas. But I would definitely try to unhinge myself a bit to focus more on digital photography.

Tell us about the difference of designing this project, as you were the content generator in entirety. A trifecta!
Well, I was imagining the structure & layout of the feature whilst storyboarding the essay idea. I was absolutely sure of shooting them in B/W and thought about a well structured and clean design template. I wanted the photographs to speak for itself by doing justice to the title. The photos/portraits/expressions should convey a sense of uncertainty and that needed to be achieved from every subject. I chalked out a copy style (name, age, residence, Struggle & survival and Future) which should be common to all and was used as subheads in which the format should be self explanatory. Choosing the clean san serifs & serifs for the headlines, introduction & rest of the text was part of the part of the style sheet. White spaces in and around the layouts was mandatory. The feature was part of the back of the book section of the mag called ‘Forbes Life’ and hence thought the connection with the word ‘Life’ was apt.

How are the cases in India in general, what are the lockdown protocols of late?
The current confirmed cases in India is almost 1.04 million with 654K recovered & almost 27K deaths. It’s increasing at an alarming rate with every passing day. We’re currently the 3rd country with the highest number of cases after the US & Brazil. The lockdown protocols are getting stringent every week due to the rapid rise of positive cases in every state in the country now. The nation has completed its lockdown 4.0 with partial lockdowns in between. Some state borders have been shut and there are movements of only essential goods & services. Amidst of all the chaos & commotion the authorities are trying their level best to ensure that the mortality rate is on check. But given the population and congestion in many unplanned urban areas across the country it’s turning out to be the worst nightmare. Every state government is trying their best to create containment zones to prevent further community spread. There have been extra hands on deck consisting of doctors, city police, health workers who have been put to work. Moreover disregarding protocols now and then has become an integral part of everyday lives and social distancing is turning out to be a myth.

This Week in Photography: Spoiling for a Fight