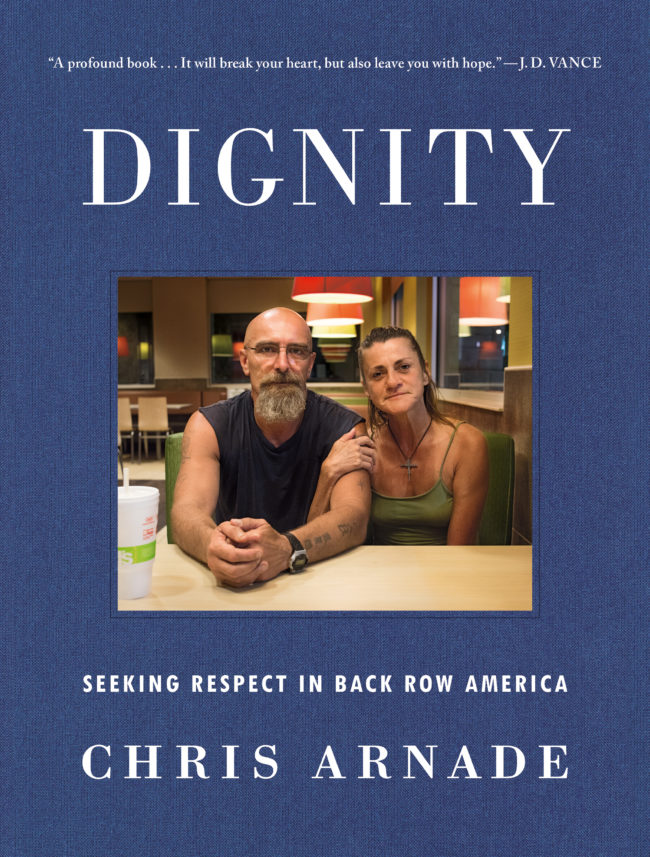 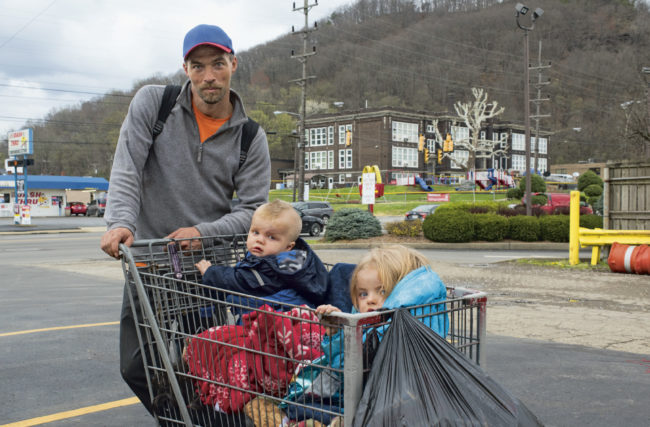 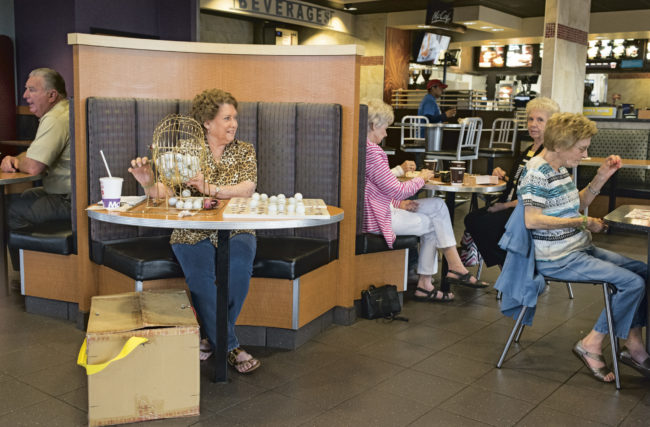 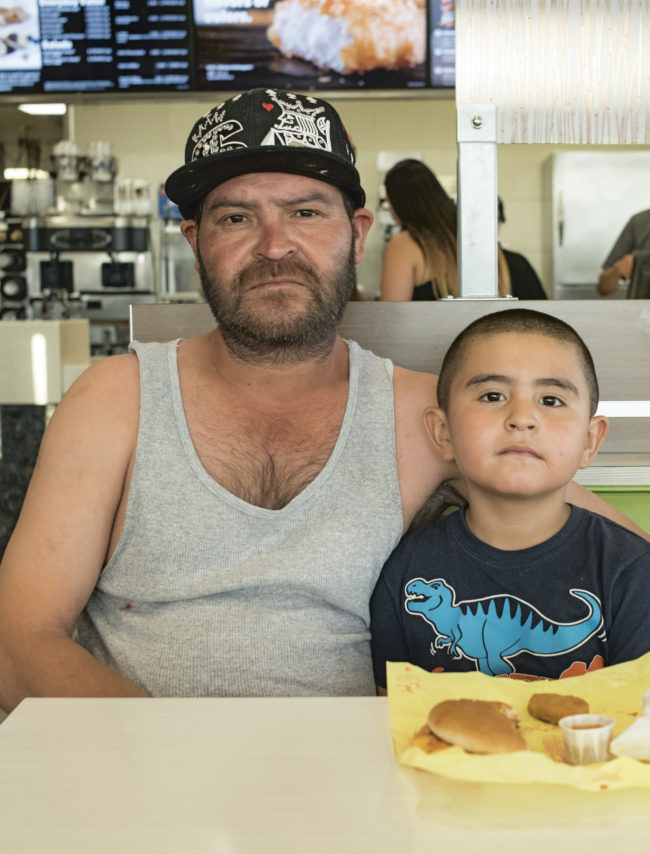 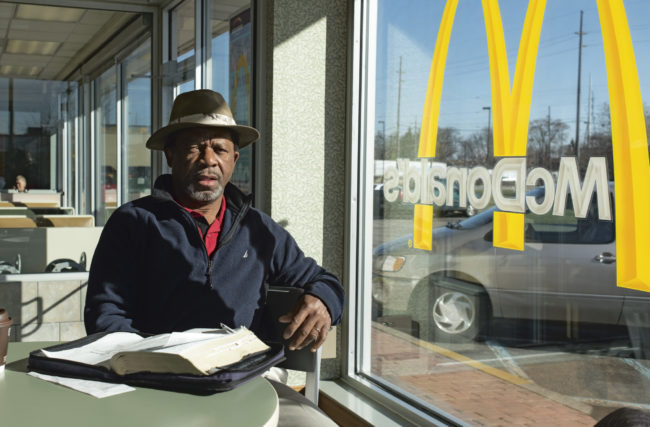 Heidi: Tell us why you choose to shoot digital despite having a penchant for film?
Chris: Like many photographers I prefer the look of film. It is what I grew up with and how I learned, so I transitioned to digital late and without a lot of love. Yet for what I ended up doing, taking pictures of people struggling, it ended up being necessary. Digital allowed me to immedietly show people their pictures, and should they not like them, allowed me to delete them. Few of the people I photograph ever have any control over how they are seen or viewed. Allowing them to look at my pictures of them, and then delete the ones they don’t like, gave them a little bit more control over the process.

You had an early interest in cameras, then it halted, what reignited your interest?
I stopped taking pictures when it became hard to get film developed (2000-ish?). Until then I kept a few old fully manual cameras around, each with a different type of film in them, and would shoot whatever interested me.When it became hard to get the film developed as the industry transitioned to digital, I just kinda gave up. Also it was nice (as any photographer who has quit for awhile will tell you) to not feel pressure to “capture the moment” That changed when I started going on longer walks into areas I had not been before. I had always spent my free time going on very very long walks (20 miles sometimes) through NYC, but mostly it was Manhattan. Around 2006 I started walking more in Brooklyn, Queens, and what I saw there, and the people I met and the stories they told, got me interested in taking pictures again. Initially it was just a cheap point and shoot digital, but eventually I got so into it that I bought a high end 35MM camera

How did you come up with front row/ back row? or what that already a term?
I came up with that term after roughly four years of documenting frustrated communities. Initially that meant spending time in South Bronx & Queens & poor other mostly urban neighborhoods in the North East (Bridgeport CT, Providence RI, etc). Eventually I included poor rural communities in Ohio, West Virginia, and Texas. What I realized was despite the differences, despites some being rural, some urban, some mostly African-american or Hispanic, or White, all had many things in common.  Not just physical things, but in the challenges the residents faced, and how they responded, and how they viewed the world. Also, almost all of these communities where filled with people who hadn’t gotten a lot of education beyond High School. That was very different from the communities I had spent the prior twenty five years of my life in, and where my family lived. Those communities, while spread all over the country, were similar in that almost everyone had an advanced education. The split I was seeing in the country was as much, if not  more, about education than anything else.

How does your previous Wall Street Job of analysis work transcend into this visual analysis and does one inform the other?
While I am proud my book uses no statistics, which can only dehumanize the problem, I did spend a lot of time looking at maps, statistics, and data when I chose where do go. I wanted to give a realistic and balanced look at poverty in America, so I went to places that in aggregate reflected the statistics on poverty. By race, geography, and community size. In that sense, my prior Wall Street work was useful. Mostly however, this project was about unlearning so much I had learned on Wall Street. How to look beyond those statistics to see the individuals impacted.

Describe your drift from the trading floor to taking photos only, what changed within you?
I wish I had a simple answer to this, but I just don’t.  As my career on Wall Street progressed I became more and more frustrated with it and how we thought, and found my interest drifting towards other things, like my hobbies (photography & walking) and my family. I stopped spending the extra weekend in the office and spent that time going on extra long walks, or small trips with the family. It is those walks, ones that had no real point beyond seeing, talking, and photographing people, that I realized I was the happiest. Work, which I once enjoyed, became more and more a chore, and I focused less and less on

What has the past few years taught you about yourself?
I hope humility. Many of us in the front row feel we have all the answers, and one of the things I tried to express in my book is we probably don’t. Which is why I didn’t include any solutions in the book. I realize I have a long way though before I can really claim to have learned true humility.

What would you tell your younger self?
Don’t listen so much to gatekeepers. Those people in industries (Photography, journalism, business) who try and define what and how something can be done. There is less gatekeeping in things like Physics or Math, but they are there also. Be more confident when you think the status quo is wrong.

How difficult was it to arrive in a neighborhood with no camera and just be, try to fit in? and what myth or misconception revealed itself?
For me it has never really been a problem. My general rule is be confident without being arrogant. Don’t cause problems. You are a visitor and that means respecting how things are done, and to do that you have to figure out first how things are done. That means watching and listening, not questioning and rocking the boat. I realize being a kinda large white guy makes it easier for me. I think the biggest myth is it is hard to get people to talk. Often it is the opposite. It is hard to get them to stop talking!

Why is the backrow easier or different from the front row since you vacillate between both?  you said at one point on our call the back row was less measured and simpler in a way
I think there is more forgiveness for failure, or for sins, or for mistakes. Partly this is a necessity. Most people in the very back row have had a life filled with problems, and have to be more forgiving of the mistakes of others. There is an understanding that life is tough and most people do their best to survive it. I also find that friendships and personal dealings feel more genuine, and less about seeing what someone else can do for you.

How does this freedom of toggling affect you? or does it make being in the row tolerable because you can leave it?
It is confusing and frustrating. I am firmly a member of the front row, there is no denying that. Most of my best friends are front row, and I enjoy their company. I also like much of what the front row likes. I love academics, I love reading obscure academic books. But I also don’t feel I fit in anymore, because I don’t necessarily share the values I used to have. I don’t fit in with the back row either, simply because that isn’t who I am anymore, despite having grown up surrounded by it. So it is frustrating

Why did you stop working and start taking photographs?
I started taking pictures again, more seriously, around 2009 and eventually left my full time banking job mid 2012

Tell us about your next project and how you chose those locations?
I have two projects in mind. One is a continuation of the Dignity project, but with more in depth interviews and less of my voice. Over the last seven years I have briefly visited places that stay in my mind, that I can’t shake. I want to go back to those places and spend two weeks in each, talking to whoever.

The other project is on global slums. I spent a month recently in Jakarta, just walking around the poorer parts of the town, without a camera. Roughly 1/5 of the world lives in these ad hock self organized poor neighborhoods (slums, or barrios, or whatever derisive term), in mega-cities we never really talk about. Like Calcutta, or La Paz, or Jakarta, or Dhakka, or so many others