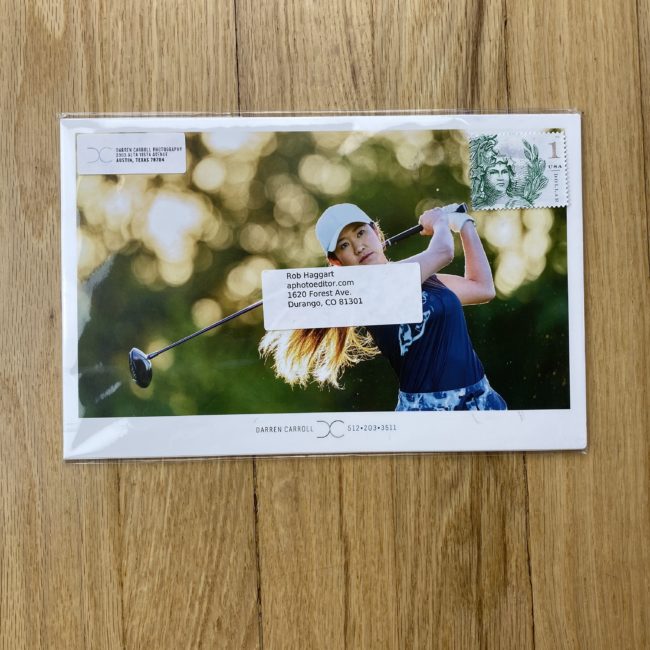 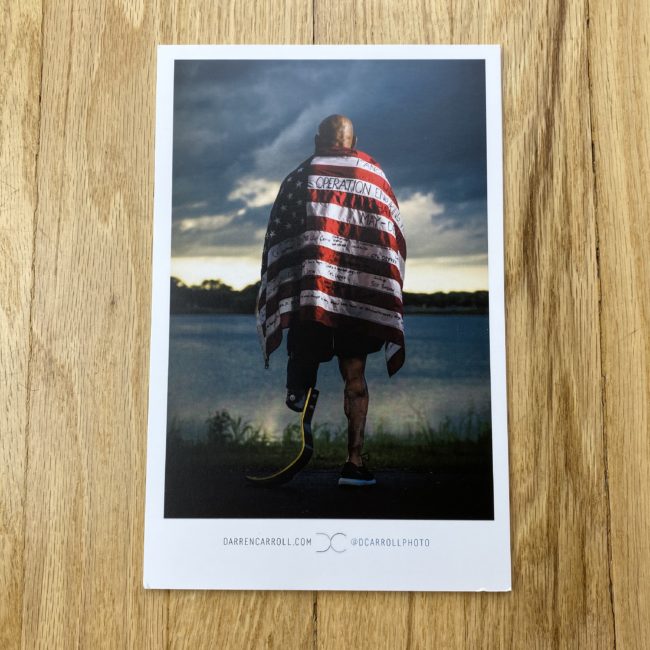 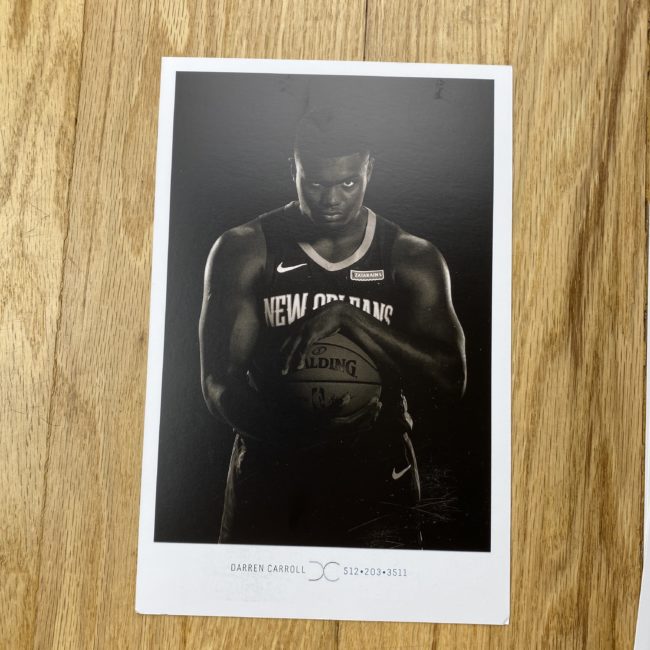 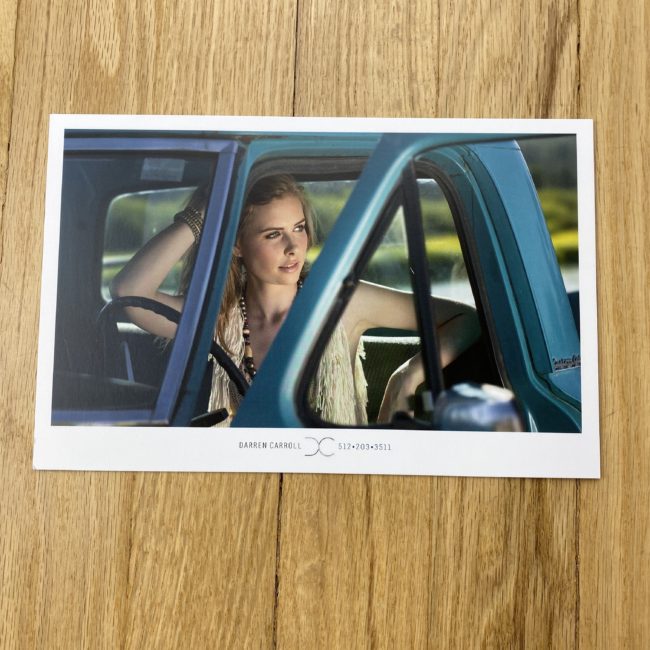 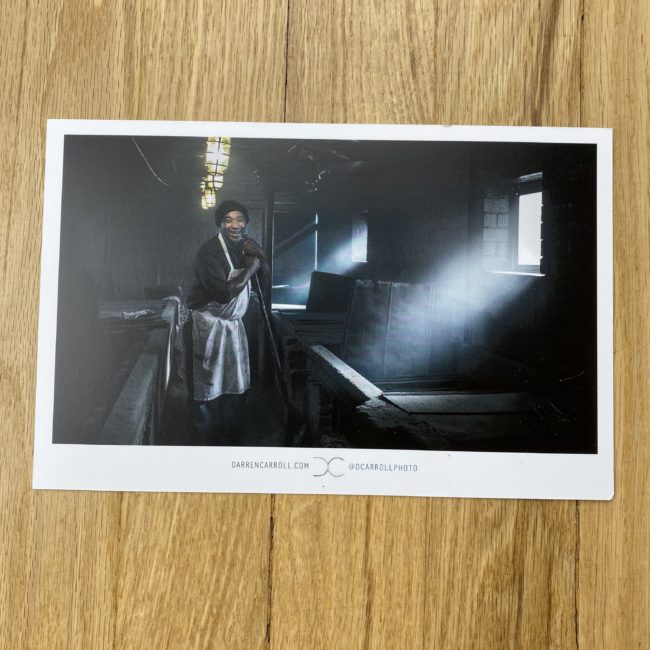 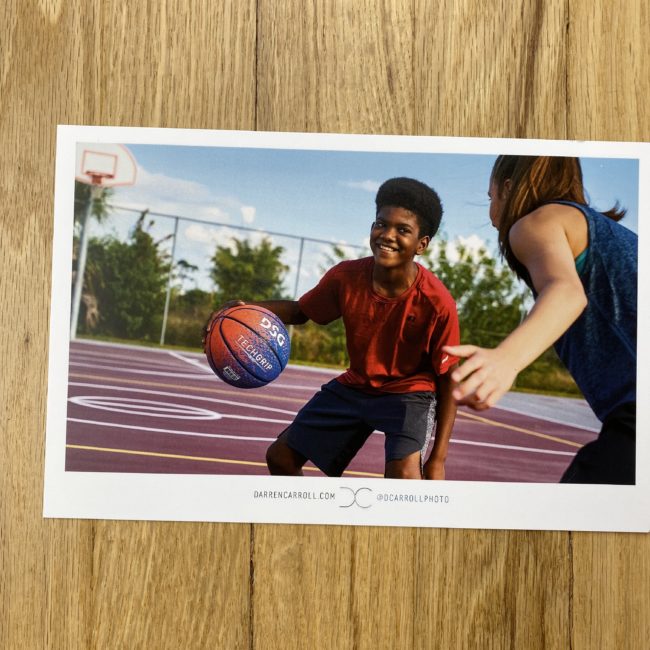 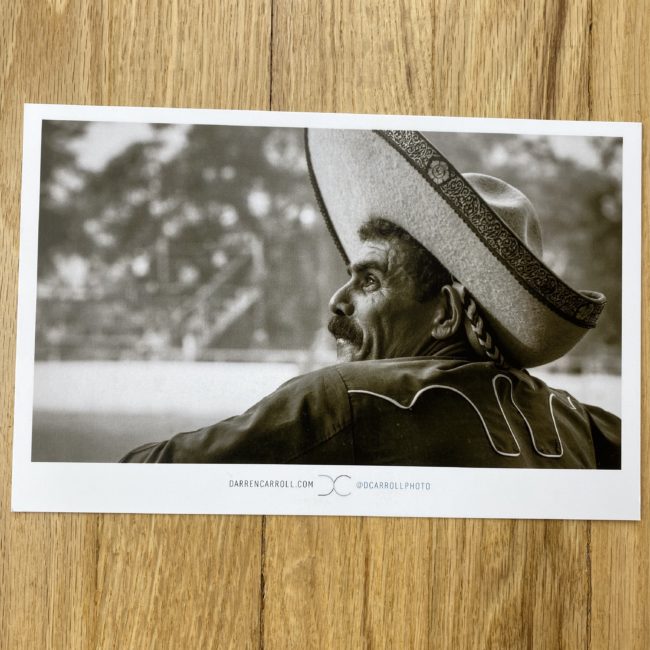 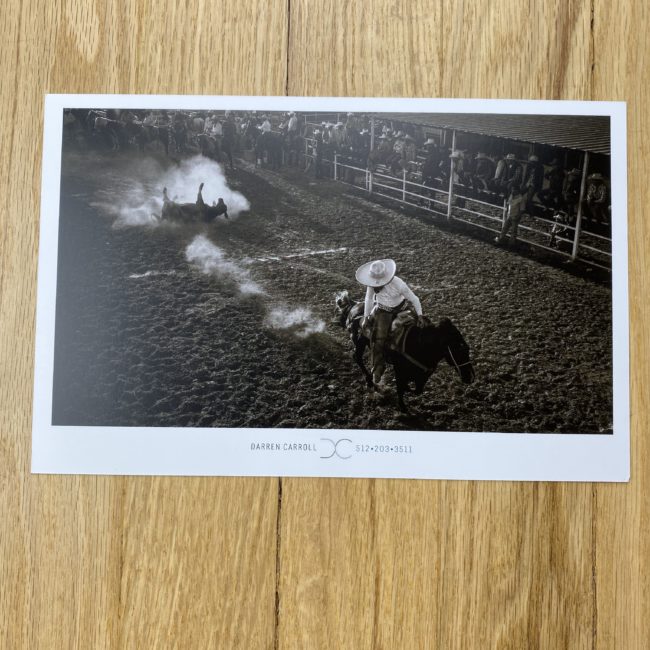 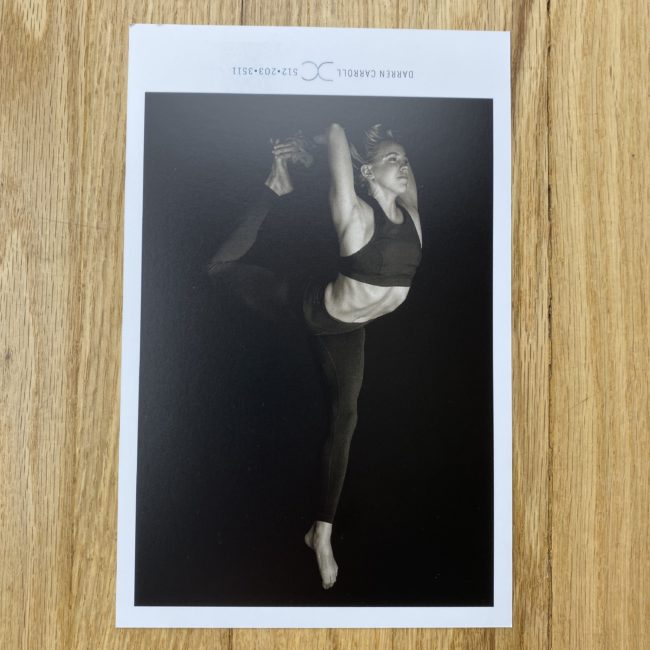 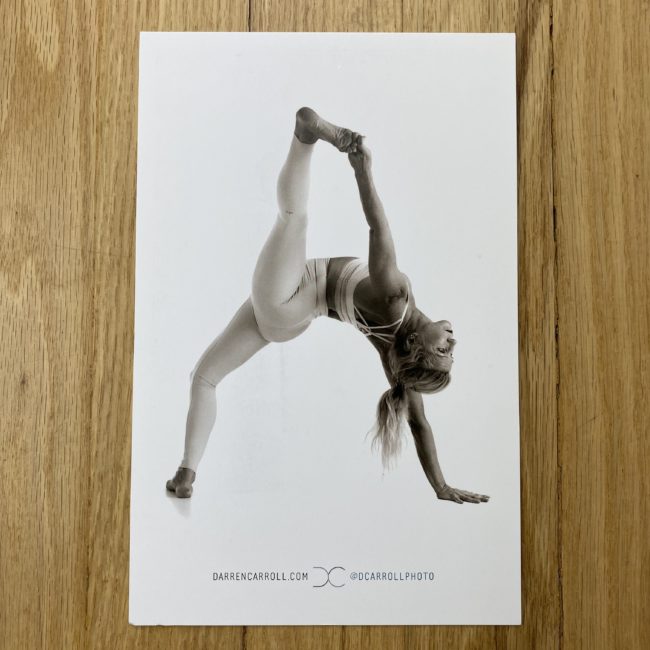 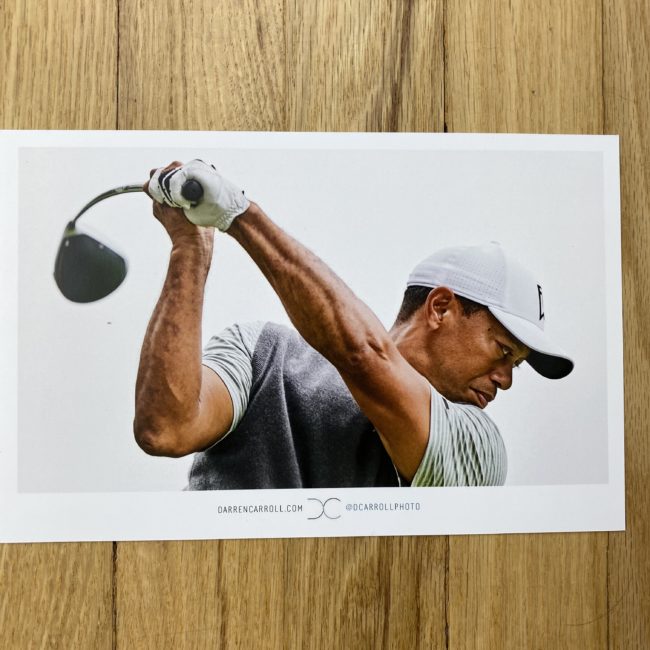 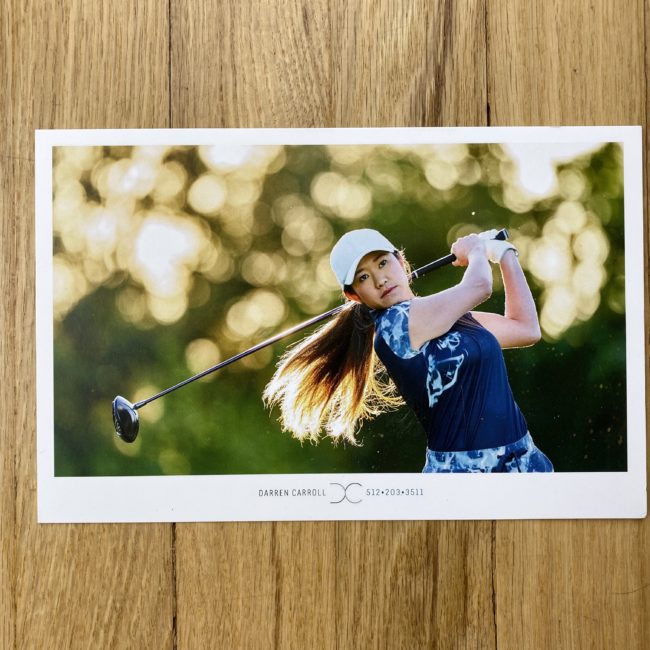 Who printed it? How many did you make?
Smartpress in Minneapolis. I like them because they can do short runs, and offer a multiple-version option whereby there’s only one setup but, as was the case here, you can swap out multiple images. So for example here I had 100 cards printed of each of the 6 versions, but instead of charging the (higher) price for 100 cards 6 times over, the charge is just for a 600-card run.

I had a small, targeted list of about 150 creatives that I wanted to send these to, and not all of them really needed to get all 6 cards. So there were some who got all 6, but others who got only 2, 3 or maybe 4, depending on who they were and what kind of work I thought I could potentially get from them.

Who designed it?
I designed these myself.

Tell me about the images?

–The female golfer is an image from a shoot for the Dick’s Sporting Goods/Golf Galaxy golf catalog, which I’ve shot for the past 8 years each December. Even though the shoot is highly produced, we try to shoot everything on-location with natural light, using real people (we cast for low-handicap golfers), as the creatives at DSG and I insist on giving the images a realistic feel–when you’re trying to sell $500 drivers to a demographic that’s extremely educated about the product and the game, you don’t want to fake it because there’s no better way to turn off an audience than by insulting its intelligence.

The image of the kid playing basketball is also for Dick’s Sporting Goods, shot for a Christmas online and print ad showcasing the company’s Techgrip line of products.

–The tennis image is of Kei Nishikori at the 2018 U.S. Open; that year was the first year of the new Louis Armstrong stadium which meant that it provided an opportunity for some new pictures and new spots to shoot from. So I went and scouted it on my first day there, before the tournament started, both for positions and to see what the light did as the day went on. (For scouts, I usually take the SunSeeker app with me and walk around to various spots on and off the court to see where the sun is going to be and what potential there is for shadows, backlighting, etc. Same thing for golf courses I’m seeing for the first time.) It turns out that the way the stadium is oriented, there’s about a 5-minute window as the sun crosses the sky that the shadow from the (open) retractable roof parallels the south baseline in the morning, right about when the first match of the day starts. And within that 5-minute window, there are about 2 minutes where the light is just right, slicing in and hitting the player’s upper body and casting a long shadow, while also rendering everything behind the baseline dark. So I would put myself in a position on the concourse to make this frame during the morning match. But then, of course, you have to have a player serving, who has to be right-handed, on that side of the court, precisely during that 2-minute window, to make the whole thing work. I can’t remember how many times I had to go back before it all came together, but I do know for sure that this was not from the first day of play…

–The Tiger Woods shot was photographed at the Dell Match Play Championship this past March, where I was playing around with some new, silent Sony mirrorless gear so as not to incur the wrath of Mr. Woods.

–The black-and-white image of the charro is from a personal project I’m working on about charreria, a Mexican form of rodeo, as it’s practiced in Austin and San Antonio. I’ve had to take a little hiatus from it just because I haven’t had the time to devote to it lately, but it’s probably the most rewarding personal project I’ve ever done and I’m looking forward to getting back into it next year.

–The gentleman with the flag is Jose Luis Sanchez, a retired Marine sergeant who lost his left leg to an I.E.D. in Iraq. He ran and finished the 2017 Boston Marathon, carrying a pole with the flag he has draped around his back, which was given to him and signed by members of his unit. This was shot for the cover of Competitor Running magazine.

–The pit room portrait is of Leamon Parks at Wilber’s BBQ in Goldsboro, North Carolina, where he had worked for over 40 years. If you follow me on instagram you know that I’m a sucker for barbecue, but I’m even more of a sucker for the atmosphere and light in old-school barbecue joints and love to photograph them, just as personal work. My wife and I were visiting her family in North Carolina, and on our way to see her grandfather’s home town she insisted on taking me to Wilber’s, where she had gone with him as a kid. Without telling me, she told the manager about my interest in places like this, and he invited us to come to the back for a little tour. It was there that I met Leamon and asked if I could make his portrait.

–Zion Williamson is the basketball player. He was the top pick in this year’s draft; every year the NBA brings a large group of rookies together for a pre-season photo and video session, where they move from station to station shooting various portraits, league marketing materials, etc. I was there for Panini America, which holds the trading card license with the NBA, shooting portraits for his rookie card.

–The yoga image and the image of the woman in the blue truck are from personal test sessions.

How many times a year do you send out promos?
Not as often as I should. This was my only effort this year. This leads me to your next question…

Do you think printed promos are effective for marketing your work?
I think they can be, but I have to be more consistent. I’m shooting for a quarterly effort starting with these, which means my next one should go out in January. I do think that it can be a successful way to get my name and work out there if done regularly.

This Week in Photography: A Review of "newflesh"