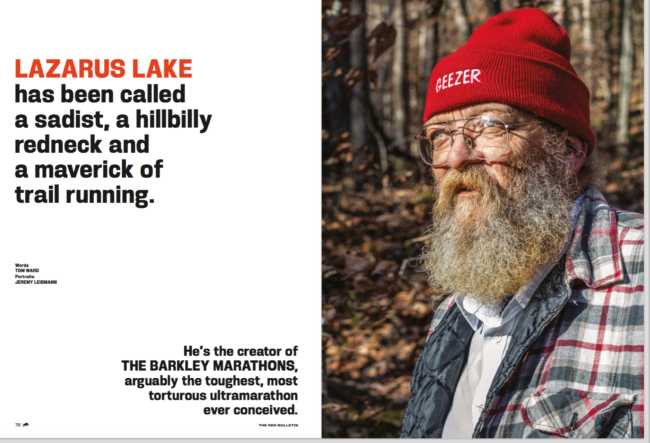 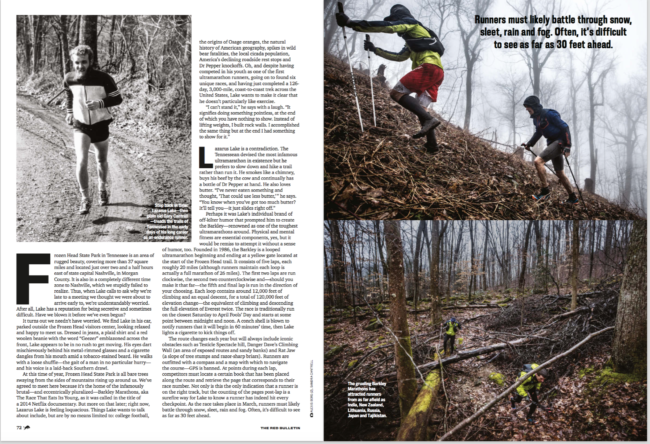 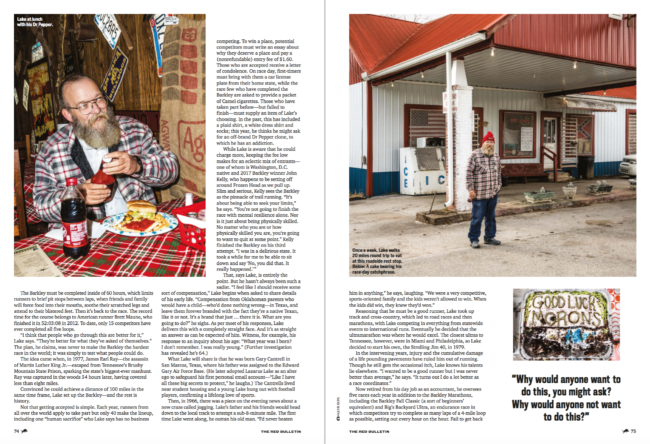 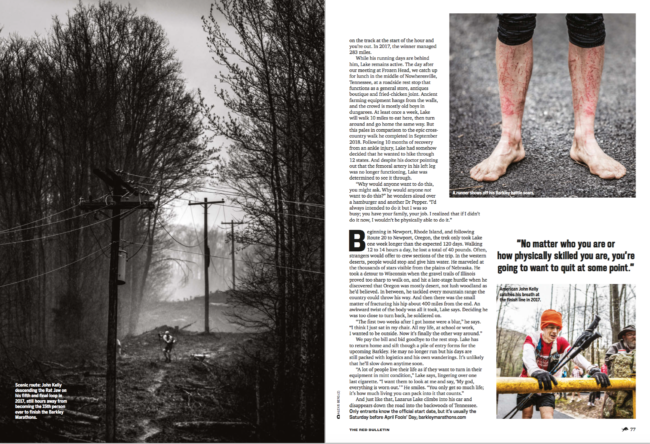 Heidi: The race course itself isn’t easy, how did you manage to shoot the athletes?
Alexis: The Barkley is a very unique race. Special to run, special to photograph. Laz, the fascinating organizer, wants to leave a mystery on the experience awaiting competitors outside the camp. What happens out there only concerns the 40 starters. It may sound strange, in the world of images that surround us, but it’s the only sporting event where it’s not allowed to go on the course to take pictures. The exceptions are minimal, barely 1% of the course. This leaves a lot of room for the imagination, and therefore, as photographer, you have to look for a different and creative way to tell the story.

What was some of the challenges you faced with this project?
The Barkley takes place at the end of March, the week of the year when it rains the most in this part of Tennessee. The trees don’t yet have leaves and the park itself appears very austere.The light is often rather mediocre. There is a dramaturgy, but we are far from optimal conditions for taking action shots. The race lasts three days and the only way to stay in the mood is to sleep in your car, a few hours when you can. Nothing is very comfortable, but it’s part of the experience. 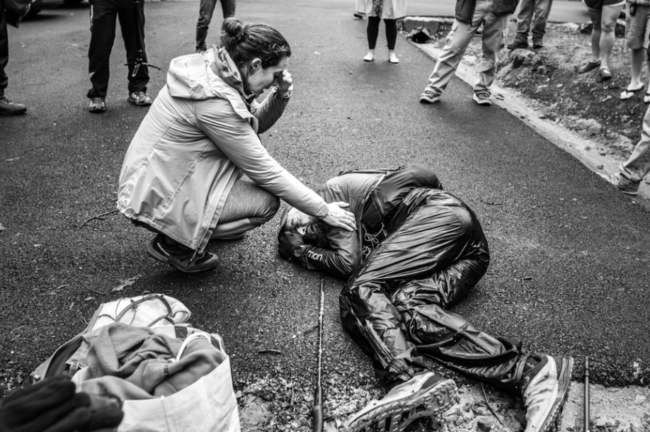 I know you shoot a lot ultra running, what made this project different?
The Barkley is a mysterious and unusual event. More fascinating than an ordinary race. The Barkley is a bit of a tale, and just being a spectator makes you a character of the story. Like a lot of photographer, I try to make deep pictures. Photos that are not consumed in a second. Photos that require a caption. At the 2017 Barkley, I made a photo that has been published a lot. We see a man lying on the ground, in a fetal position. His wife touches him and seems very affected. Around them, there is a little void and a dozen spectators, whose only feet and legs are visible. This is of course a photo a little aesthetic, that can be read directly. But, she hides a long story. This man’s name is Gary Robbins and he just failed the biggest challenge of his life, in the most cruel way possible, falling for 6 seconds after 60 hours of struggles. And this is just the concise version of the story. As a result of this photo, I made a 20 minute film to tell the full depth of the story.
https://www.alexisberg.com/labarkleysanspitifilm-zkh3

How much did you the course did you cover and did you have to run at all?
As I said, the Barkley remains a race that can not really be photographed. The highest point is accessible, in less than an hour’s walk. It is strictly forbidden to follow the runners. When I photograph an ultra, I run only downhill, to reach my car faster. I must say that I photograph with two big cameras and quite heavy lenses. You have to make the right choices to get to the right place at the right time. This requires a very precise study of the maps and the passage times.

What draw you to these types of events/ultra running?
I’m not a runner. I started by photographing ultra-running by accident, the chance to follow my brother on a race. It’s pretty strange to run twenty hours in the mountains. This strangeness, this distance that I maintain with this sport, I believe, feeds my photos. My relationship to images is so, they are not a mirror for myself, but rather a window to the outside. I live in Paris, but I never do a picture in Paris. But facing the otherness in front of what I don’t know, photo became my language. That’s how I started to photograph people running.

Did you always plan on doing a book out of this body of work for the magazine?
Yes. The Barkley is a unique race because almost no one can finish it. In 30 years, only 15 people managed to finish the 5 loops. Who are these 15 finishers? Some are a bit famous in the community, some are anonymous full of mysteries. All are legends. Last April, with a friend journalist, we found them all. And we met, interviewed and I photographed each of these men, who live all over the US. It was an exciting journey, because everyone is a pretty incredible person. The book will prove it.

The Art of the Personal Project: Fritz Liedtke