I didn’t want to write today.

It’s not that I don’t love you all.

But I’m always honest, and keep you apprised, so the issue is that I’m super-exhausted.

Good things, like bad things, sometimes come in threes, and we wrapped our first session of Antidote this week, I’ve got a big museum solo show coming up next month, and we’re working on my first book as well.

I’m as cooked as a lobster after an hour in the pot.

But deadlines are not forgiving, and Friday looms just ahead.

So I tried everything I knew to boost my creativity.

I drank some coffee.
Did some stretching.
Ate some sweets.

And then I went for a walk. (The best trick of all.)

Out there, in the fresh air, with the sun on my face, I remembered that we can’t force our creativity.

With this weekly column, 8 years old next month, I’d say I’m an expert in keeping the creative juices in regular, working order.

And if I’ve learned anything, it’s that the creativity is the boss, and we’re the vessel.

I often tell my students we don’t have an art boss, but as I sit here writing, on this day when my creativity is so battered, I realize that’s not entirely true.

The creative energy, or the force that makes it, is really in charge here.

If you want to tap into it, long term, you have to nurture it, and respect it.

That’s why I went for that walk, knowing it was my best chance of communing with the writing gods.

And idea would come, I hoped, as I couldn’t motivate to revisit London, or Portland, and the first two books I looked at weren’t right either.

Out there, in the sun and the breeze, I thought of how instinctual creativity really is.

So much comes from the subconscious, or through happenstance and coincidence we take to “mean something.”

We imbue things or experiences with heft, believing that certain objects, places, or days, are just THAT MUCH MORE SPECIAL than everything else.

As photographers, we believe that some things can step out of time.

Out there, on my walk up the hill, I remembered the moment, in July of 2016, as my family and I spent a little vacation on California’s Central Coast.

My wife’s family live in/on the Monterey Peninsula, so I’ve visited many times, and think it’s about as ideal a California lifestyle as I have yet seen.

But for today’s purposes, we’re going to focus on the drop dead beauty, and the impossibly lovely feeling of the ocean moisture on your skin, in the air, no matter where you are.

Back in 2016, we were in Carmel, headed South to Jessie’s Aunt’s place in Big Sur, and the traffic, now famous, was about to REALLY get going, when I saw a sign for a historic Mission.

I wanted to pull over.

Jessie and the kids were fried, so they tried to veto it.

My daughter, who would have been three, came in with me, while the other two stayed in the car.

Maybe because it was a wedding, the courtyard was open, and we walked right in.

A fancy photo shoot was going on, and people seemed happy. I felt a pull into the courtyard, and then further still into the limestone church.

It was an energy I can’t describe, but it said, “Things of incredible weight happened here. This place matters. It is beautiful, so very beautiful, but it is also important.”

I had five minutes, god dammit, and I marched into the chapel, and peeked around.

Like I was in Zorro’s California of the late 18th or early 19th Century.

I felt like Antonio Banderas and Catherine Zeta-Jones were going to leap out from an alcove and challenge me to a duel.

“Señor, you did not pay the entrance fee. You have offended me, and I challenge you to the death.”

“I’m sorry, Antonio Banderas. I didn’t know there was an entrance fee. The gate was open. I only have five minutes. You really were great as Zorro. Can I go now?”

I was sure there was something special about the Mission, and when I saw the name Junipero Serra, and what appeared to be his grave, or tomb, it burned into my brain.

Look this man up.

Come back to this place.

So I got in the car, and told Jessie, “I’m going to figure out what the hell is so important about this church. And we’re going to come back as soon as we can.”

As it happened, there was a big, deadly accident on Highway 1, maybe five minutes down the road, in the direction we were headed.

Did the ghost of Junipero Serra save my family’s life?

I don’t think I’m that openminded yet, even though I did once write here, in this column, about talking to Garry Shandling’s ghost through a medium via a Subaru’s bluetooth.

When I got home, I hit up Wikipedia first, and then read a biography on Junipero Serra that I purchased for my Kindle.

I read it in stages, and admittedly, this was an obsession from 3 years ago.

But the short version is that Junipero Serra, a Franciscan monk from Majorca, was an incredibly powerful, and seemingly power hungry dude.

He used to whip and flagellate himself, and walked around with an open wound on his leg, and also, he was a witch hunter for the Spanish Inquisition in Mexico.

It it undisputed that he colonized voraciously for the Catholic Church and Spanish Empire in the New World, and essentially enslaved native people when he ran things for the religious wing of Colonialism’s power.

Serra, who was recently Sainted, badly wanted to colonize California, as there were only rudimentary Jesuit missions in Baja California, and nothing but the native people up above.

After machinations, the Jesuits were removed from power, kicked out of Baja California entirely, and Serra was given license to take Alta California, with military guards for his relatively small operation.

This man, whose tomb I discovered, was the Religious Conquistador of California.

The boss of bosses.

His first mission was at San Diego, just as a beachhead, but the next, and the most important, was at Monterey and Carmel.

The 18th Century power center would be the Monterey Bay, with its proximity to fertile lands, and the abundance of the sea.

San Francisco would become bigger and more important after the gold rush in the late 1840’s, and of course Los Angeles would be the 20th Century mega-city of them all.

(Running on cars and optimism.)

But it’s in Monterey and Carmel that you can feel the 18th Century vibe, and see the best, elegant beauty of that era of Spanish Colonial art and architecture in North America.

So when my family and I were in Monterey late last month, we went back to the Mission San Carlos Borromeo de Carmelo, in Carmel, and I paid the $9 entrance fee, which as a journalist I rarely do.

I know it’s silly to say that, as its a church, not a museum, but in this case there’s little difference.

The Carmel Mission was finished in 1797, rebuilt over the years, and recently underwent a major renovation, so it’s certainly looking its best these days. 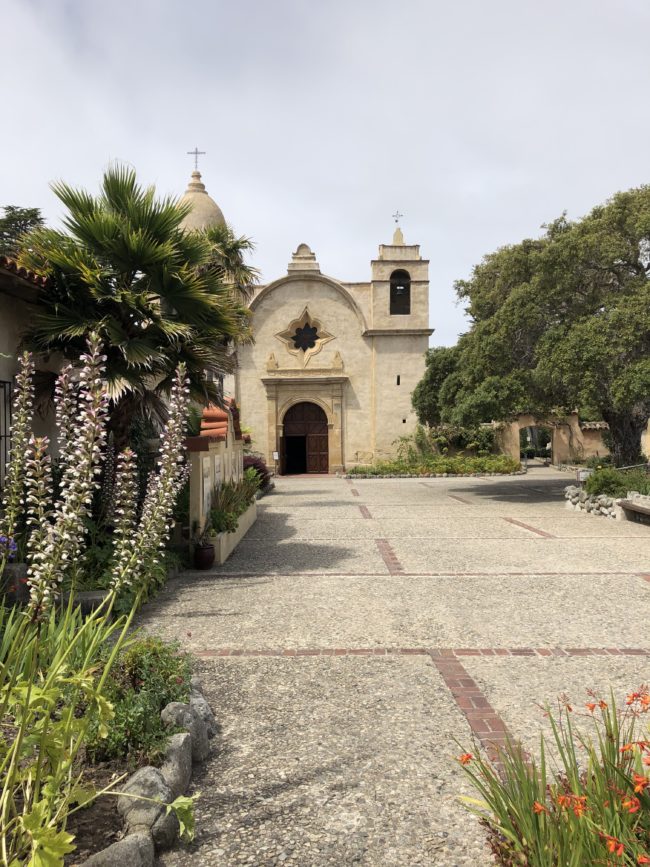 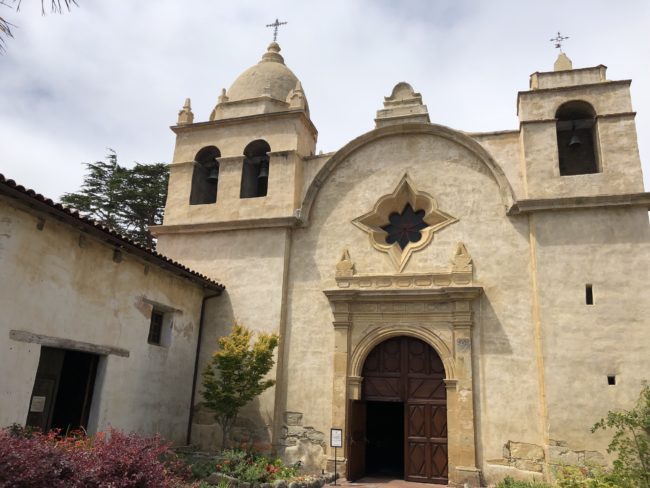 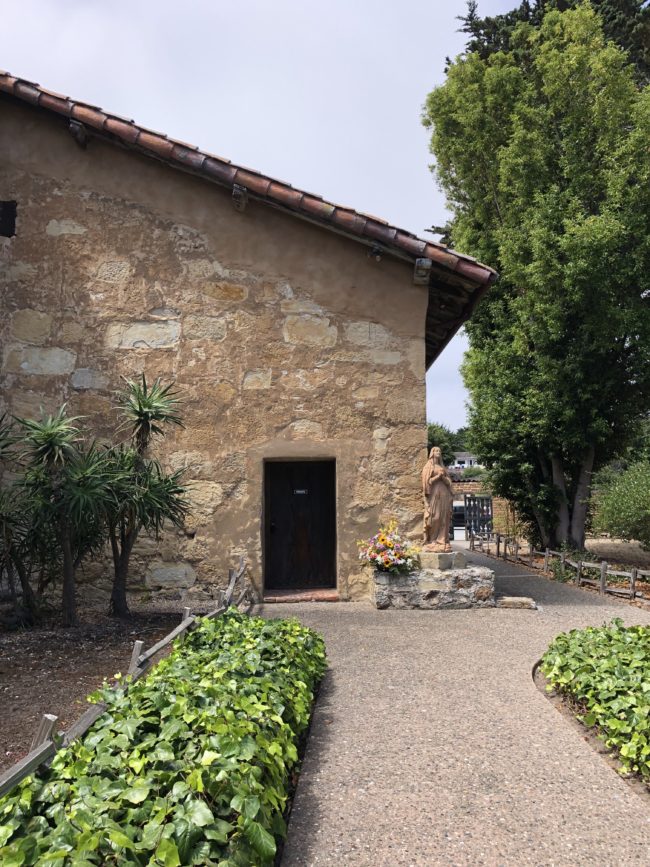 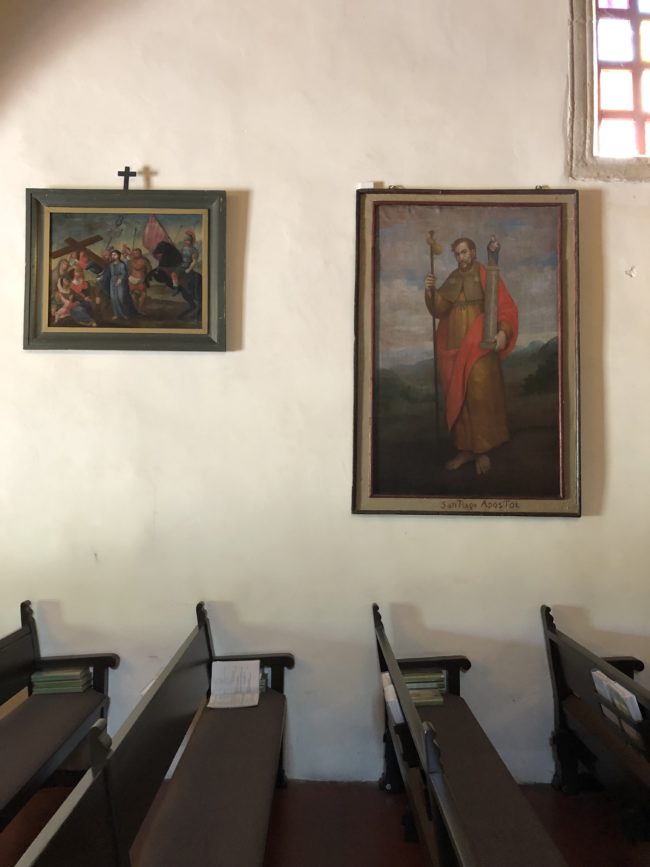 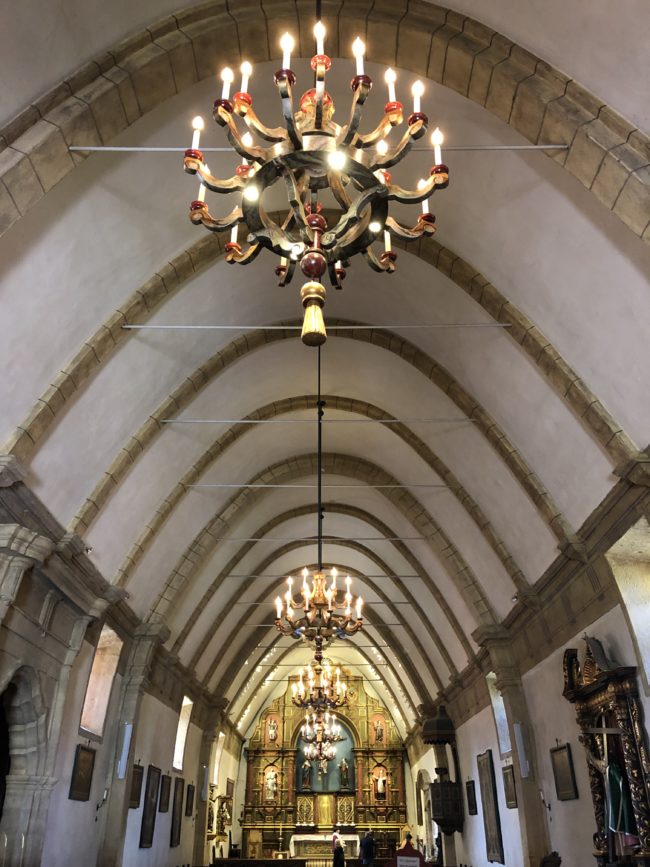 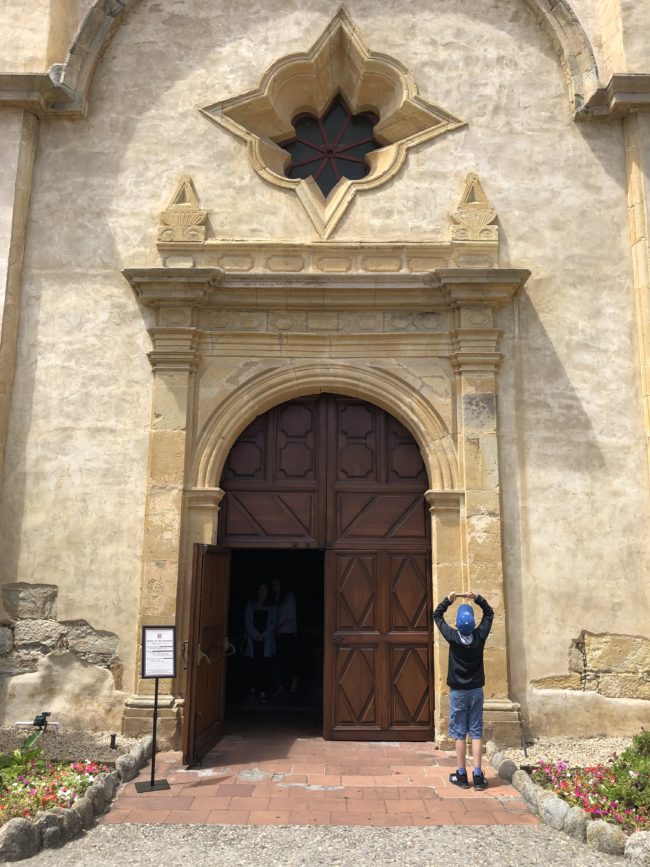 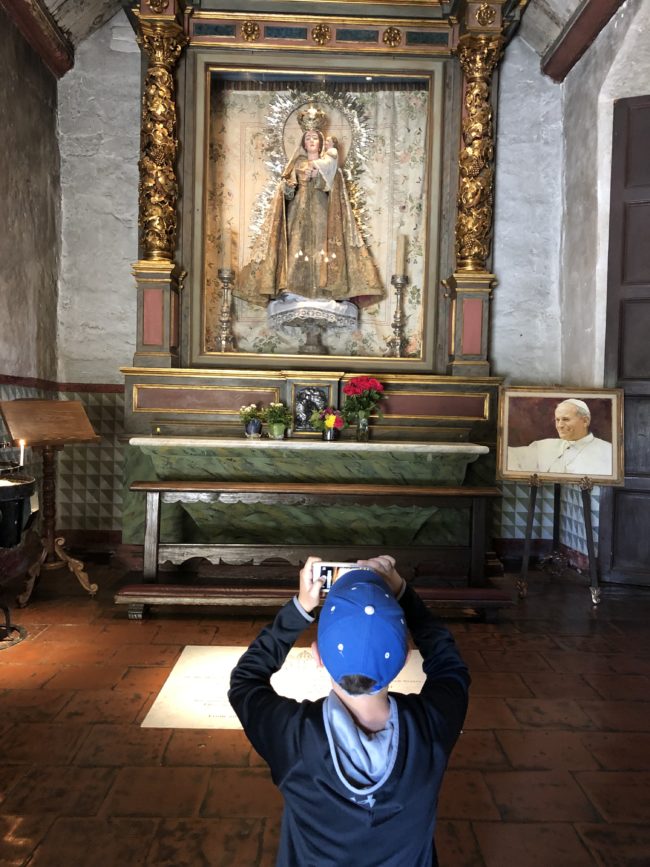 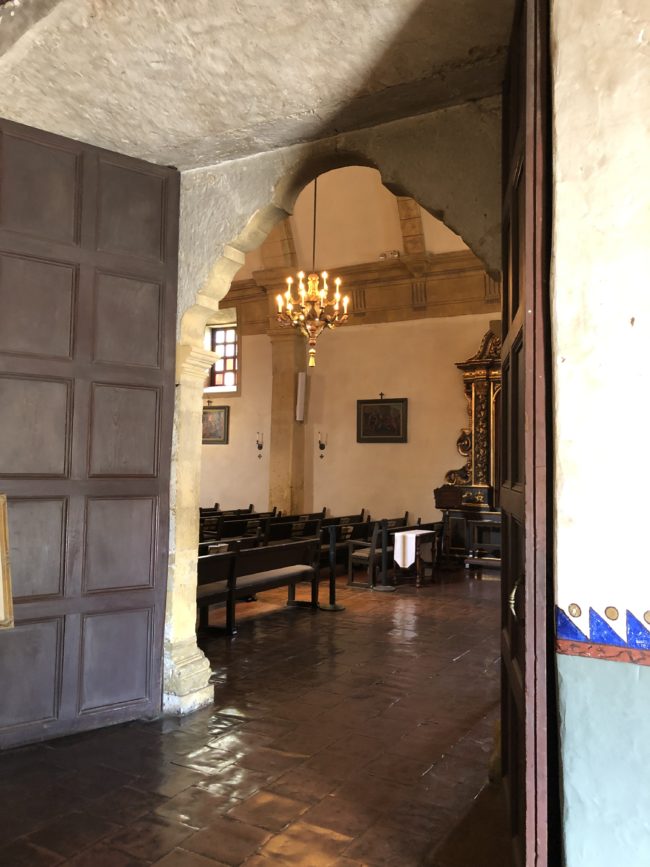 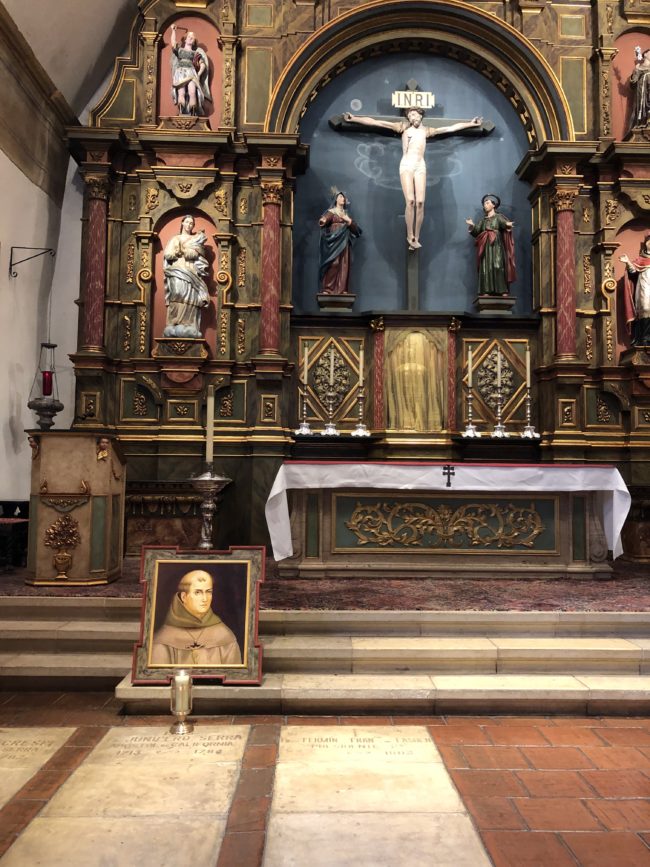 I told my friend Ed about the hour we spent there, as a family, and the way my wife and two children were equally seduced.

The gardens, the fountains, the bougevvilla, the tall trees.

“That’s how they hook you. Ever since Junipero Serra was out there making converts and crushing skulls. They know what they’re doing, the Catholic Church.”

Is it true? Were they using beauty, the limestone, the paintings, the history, to whitewash the original sin of Colonialism?

I guess, on some level, they were. It’s like a mini version of going to the Vatican, instead of the Prado.

It’s why my references, as an artist and occasional art historian, go to Madrid, or even Rome.

Junipero Serra lived at the Mission, and is buried there. Whether you’re a fan, or think he was a character from a horror film, either way, this was seismic ground.

I knew that something important happened there, back in 2016.

My gut was screaming, and in this case, it was totally right. The history of California ran through the walls, and by trusting my creative instincts, I had the most wondrous experience three years later.

(I even made a little promo video for you guys below. My first time in front of the camera)

My wife, kids and I were all entranced, so as a place to visit, I’d say this spot comes highly recommended.

Everyone else staying at our motel in Monterey was from Europe, or another continent, so this advice applies to all of you.

Next time you’re in the area, on your way to photograph like Weston at Point Lobos, stop in at the Carmel Mission.

The Art of the Personal Project: Shawn Hubbard 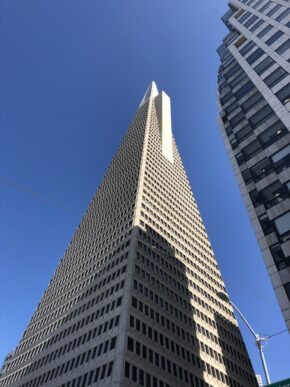