Jonathan Blaustein - May 24, 2019 - From The Field, Photography Festival

It took me 23 hours to get home from London yesterday.

So very, very worth it. (Trust me, the stories will be crazy!)

But London will have to wait for a bit, as I’ll likely intersperse some of those articles with the pieces we’ll be doing soon about the Best Work I Saw at the Photolucida Festival in Portland.

Today, rather than drop you into London, May 2019, where about 30% of my brain still seems to reside, I want to think back, just a few weeks, to my odyssey of a trip in Portland.

Seeing the East Coast, West Coast, and then Europe in 6 six weeks is not really something I could have planned.

Each city has its own particular flavor, its special brand of cool, and while London may be my favorite global megapolis at the moment, Portland is a proper little, boutique city in comparison.

I flew in to Portland from Albuquerque, (via Phoenix,) and almost immediately I knew I was “there.”

Walk out the offramp, there was a Columbia outerwear store, a Pendleton blanket stand, an “Only in Oregon” wine shop, and so many cute locally owned restaurants you could blind-fold yourself, spin around, point at any of them, and it would likely be good.

Returning home, I noticed a sign that said that the law required all stores to charge the same prices in the airport as they do in-town. So my amazing Pad See Yew noodles were only 8 bucks, and I saw bottles of water for sale for $1.25.

Mostly, I think that’s my take away from Portland.

Separate your preconceived notions about twee, or meet-cutes, or whatever Carrie and Fred might have mocked, and I thought Portland was rad in just about every way.

I admit, though, I was a bit disoriented at first. Coming into the city from the airport.

Like any good city should, you can grab a train right there, (light rail in this case,) that will bring you right into the heart of town for something like $2.50, in 45 or 50 minutes.

All the way along, through, we were in tight corridors. And everything was green and lush! 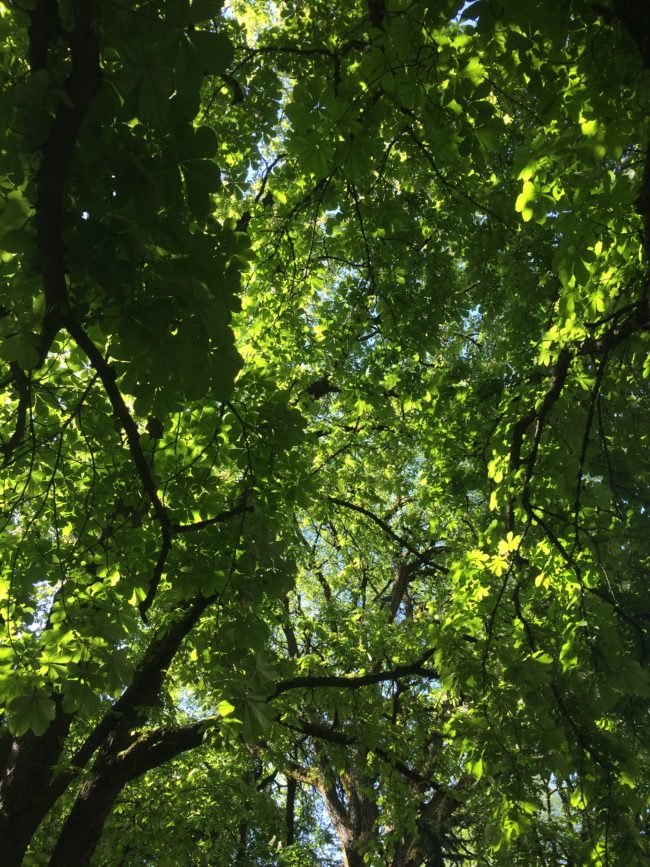 Train tracks cut into ravines. Or buildings pressed in on either side.

I couldn’t get a sense of where I was?

It felt like the route was pinched in.
Claustrophobic.

It was weird, which was a word I heard like 573 times during the week I was in Portland.

By the time the train found the city proper, the buildings had crept even closer, and the entire train corridor and street were seemingly 40 feet wide.

I could barely breathe.

If I were Rodney Dangerfield, and had a collar to loosen, I would have done so in just that moment.

But then, and only then, did the train pass the basketball arena, make a sharp bank to the Southwest, and cross the Willamette River on a multi-purpose bridge. 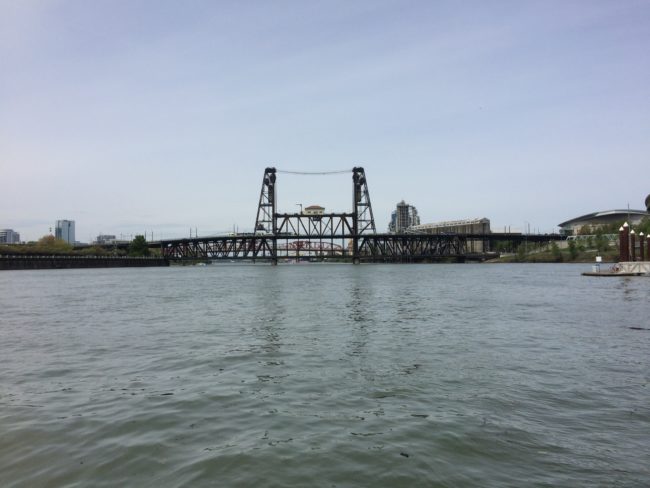 All of a sudden, your eye is torn in two directions at once.

The cute, shiny downtown in the glowy-evening-light, set against some green hills to the Southwest, and then, off to the North, on the East bank of the river, a huge working tanker ship at an old industrial shipping dock, right there in the heart of the city.

They literally sit opposite each other.

The working, worn, and maybe-less-than-shabby-chic part of Portland, the timber town that still has logs floating in the river, to the trendy, foodie, hipster, cultured, amazing, progressive city it’s become.

But as soon as that big open view was there, it was gone.

And we were back in the congested feeling again, on the other side of the river.

I’m not sure this is correct from above, but I felt like downtown Portland was a blanket you’ve thrown on the ground, and it folds in weird ways.

When you’re in the folds, you can’t see the blanket. (If you’re a small spider, for example.)

But my first full day, after my first session reviewing at the festival, I went on a long walk with my good friend Heather, heading back to the river to cross at the Steel Bridge, before making it back on one of the more southern bridges, which was high enough for the first big view.

Mt. Hood.
Covered in snow, conical and majestic, looming to the East.

That helped a little.

It wasn’t until the next day, though, when I climbed the biggest hill I could find to Washington Park, and then jumped on a statue pedestal to get higher, that I felt like I could breathe.

I caught a big vantage, oriented myself in space in a new town, and then things settled in nicely, vibe-wise.

Truth be told, Mary Jane is legal in Portland, as it is in Colorado, and I went to a cool dispensary called Serra, with a buddy, and picked up a little something for the off hours. (The place was both stylish and reasonably priced, and the staff was nice. Thumbs up for sure.) 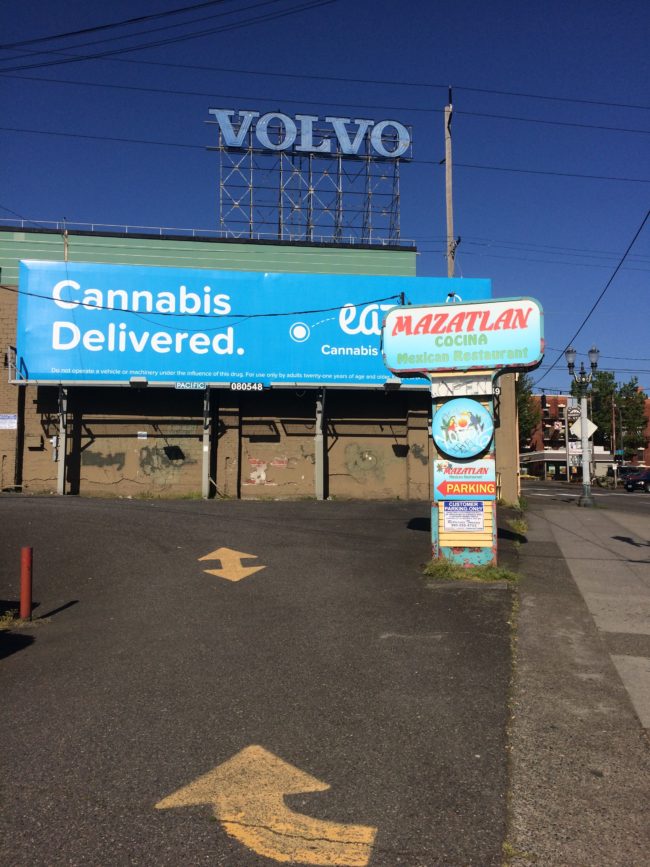 As my Park Walk was free time, after I did my Lewis-and-clark-like survey from a peak, I dropped a bit deeper into the park, and was immediately surrounded by 100+ft tall trees. 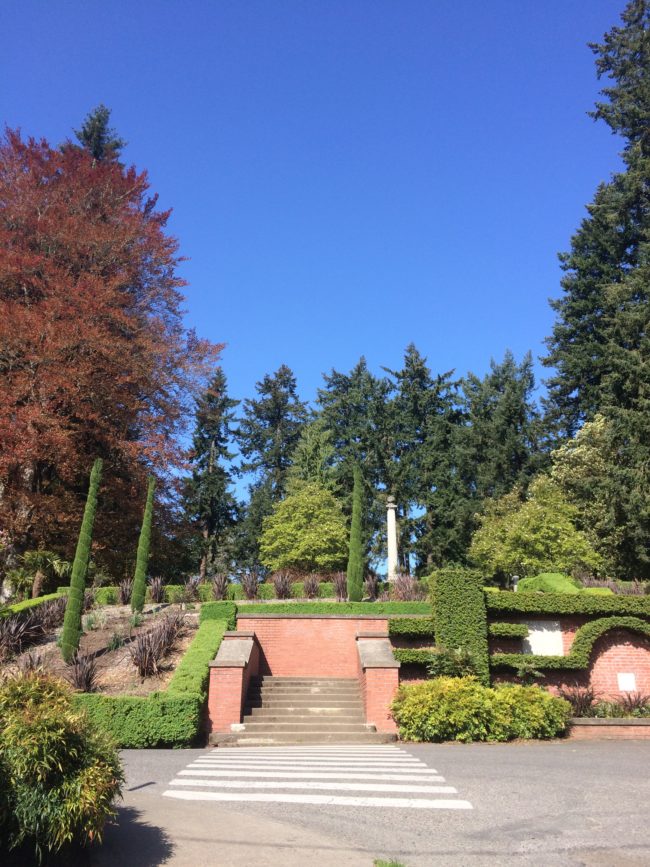 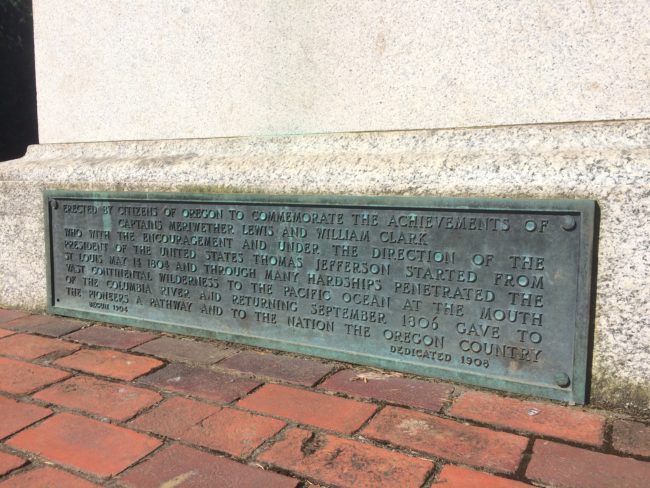 Doing my Lewis and Clark impression, I bump into a statue in their honor 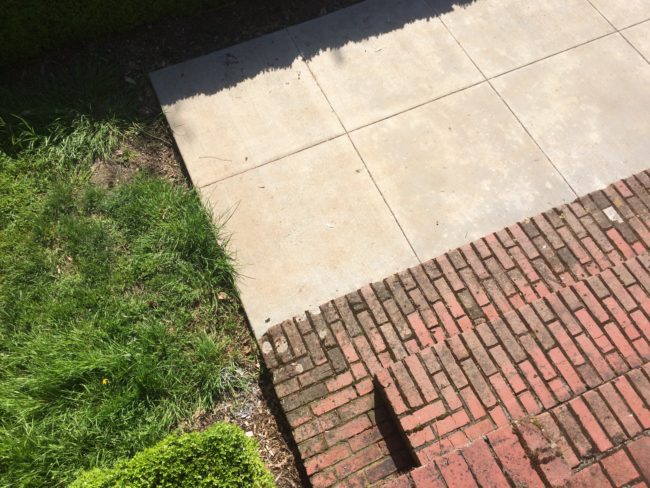 View from the Pedestal

But once I turned another corner, I saw a swing set, up the way.

Nobody was there, nor was anyone even around.

Noticing swing sets was more a parent-move than stoner-sensation, but soon I was there, partaking in public, (maybe a no-no, but again, no one was even around,) and then I set my stuff down.

Above me, the sky was purple-blue, and the trees were touching its belly like they were tickling a new dog.

Up, I pumped the legs.

Soon, I was as high as I could go, and then I leaned back and stared up at those trees as the motion made my belly feel like Free Fall at Great Adventure in Jersey circa 1996.

For a moment, I wasn’t a Dad.
Or a portfolio reviewer.

I wasn’t a writer.
Or an artist.

I wasn’t a Democrat.
Or a martial artist.

I was a kid on a swing set, truly, humbly amazed at the beauty of the sky, and the trees, and the flowers around me.

All the while, hoping that I wouldn’t let go, or lose my grip, or vomit all over myself.

(No vomits in Portland, but I did have a proper incident in London. We’ll get to that another time.)

After playing, I headed back down the hill into downtown, and everywhere, there are clusters of street food stalls.

One after the other. With infrastructure and everything.

I’m not sure I’ve seen a street food culture like that anywhere in the US, and again: what’s not to like?

There is much more to tell, including clueing you guys in on some of the places I ate and drank, (including one bar you will NOT believe I went to,) but those will come in future articles.

Rather, as I’ve been all praise so far, I want to keep it real and point out that Portland, too-nice or not, is far from perfect. 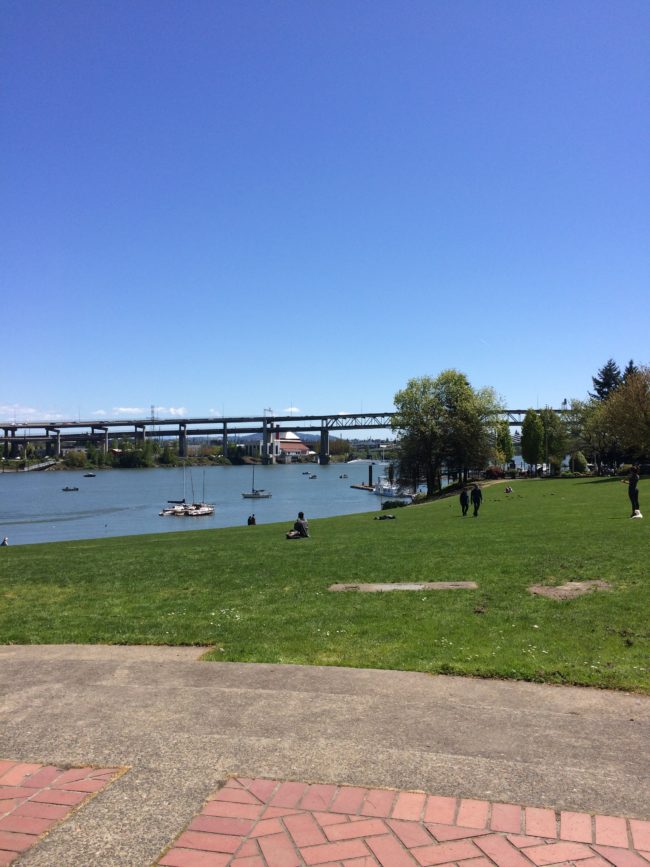 Public green on the Willamette River

So many gaunt, sad-looking white guys with obvious drug problems, and no proper home.

The homelessness crisis is not quite as dramatic as it is in California, but it is pretty damn obvious in Portland too.

Really, it made me think, as I’ve pieced my West Coast travel together in the past few years, that there is a permanent street class now that rivals what we saw in all those photographs of the Great Depression.

It’s a hard fact, and one that California, Oregon, and (probably) Washington will have to grapple with heavily in the coming decade.

Not to leave you on a downer, but I’m pretty jet lagged at the moment, and just dropped 1500 words on you, so I think we’ll call it a day.

PS: I got a shiny new iPhone in Portland, so as of my London trip, we’ll have 4k video and much improved photographic technology on these articles going forward.

Homepage » From The Field » Impressions from Portlandia

There Are 5 Comments On This Article.