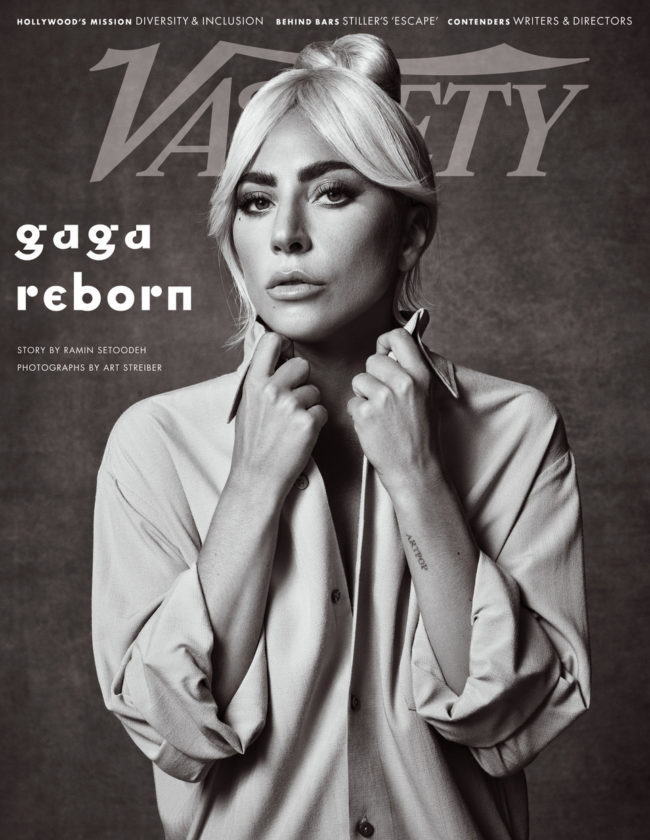 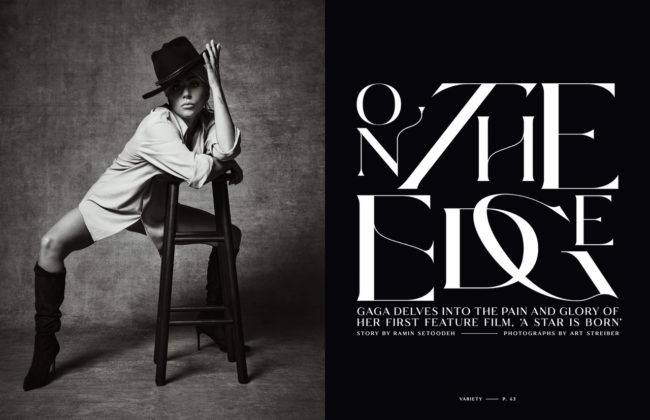 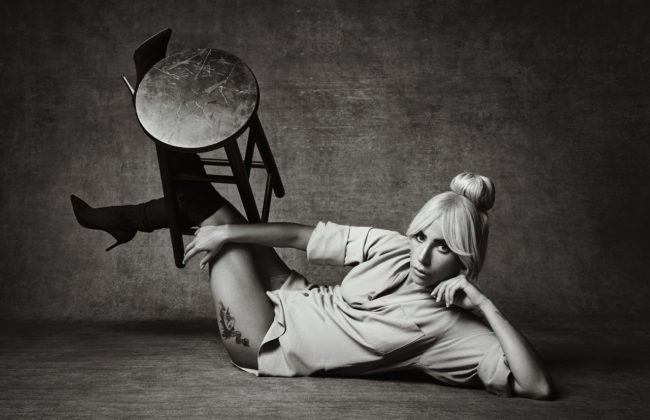 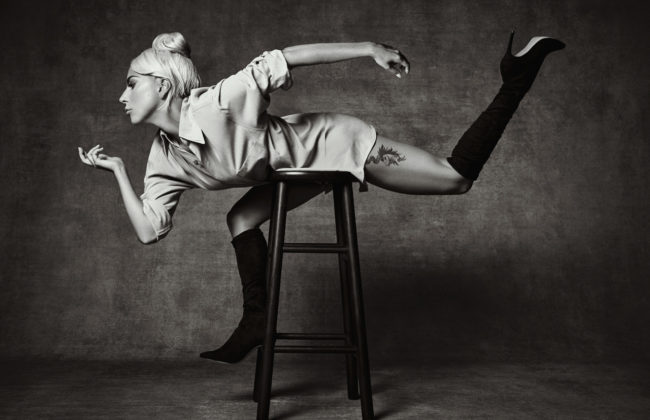 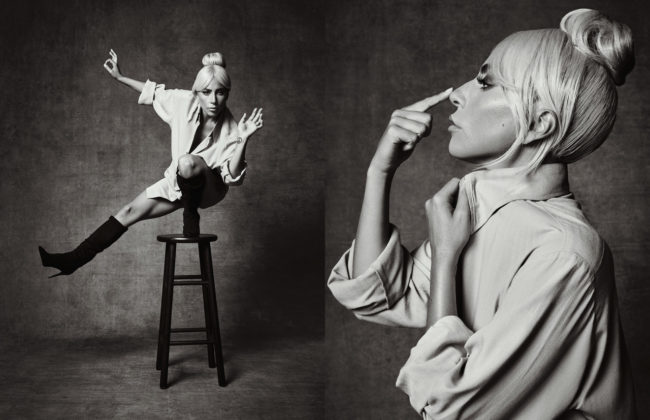 Heidi: Were you star struck?
Art: Going in, I was a bit concerned about Gaga’s star power and how that might manifest itself; we were shooting in her garage, on her terms, and I really didn’t know which way the shoot would go.

But from the second she introduced herself (hours before we started working) wearing sweats and no makeup, I was immediately put at ease.  She was phenomenally collaborative and as she perched and balanced on a 4-foot wooden stool wearing 4-inch stilettos, her team said nothing…allowing her to move, pose and perform for the camera.

What stood out for you for this shoot?
This shoot is really an excellent example of the power of editorial photography and how great imagery can result from just one light, a backdrop and an endlessly giving subject. It’s so easy for us to get sucked into a “more is more” workflow and I have to remind myself that sometimes, all you need is one light…and no fill.

What was the conversation on set about?
After Gaga stepped onto the backdrop, it was really all about the photos.  Our give and take was effortless; she’d lead and I’d make suggestions, then I’d direct and she’d tweak my direction.  Then she’d make a move and I’d ask her to adjust.  Over the course of our shoot she took two breaks to take a look at the monitor, review what we’d accomplished, and improve on what she’d done.

You have an enormous body of celebrity work, what made this one different?
What made this shoot different and unique was how Gaga performed for the camera, how much she gave, and how she continued to push and explore for 40 straight minutes. The bottom line is that Gaga cared about making great photos.

How did the concept for the shoot come about?
Two weeks earlier, we had photographed Bradley Cooper, his DP, Costume Designer, Production Designer and his Editor, and we were supposed to have photographed Gaga with that group…but she was sick and didn’t make it. We photographed Cooper and his team on a Schmidli backdrop, in black and white with a single light source. Creative Director Robert Festino, Photo Director Jennifer Dorn and I were going for a 70’s-rock-band-group-shot look…a la Fleetwood Mac. So…we had the “one light on a grey backdrop” look in our back pocket two weeks later when we were set to photograph Gaga.
We arrived at her house in Malibu, not really knowing what direction the shoot would take.  Variety was featuring her on the cover and I thought we had to go “big” and “glam”.   We walked the property and considered photographing her with one of her horses. But ultimately we landed on just sticking with the backdrop and it was Gaga who suggested that she just wear one of the shirts that Bradley Cooper wears in the movie…and a pair of knee-high stilettos.

Did you feel you were shooting her character or her?
No question…I was photographing Gaga, but I was photographing that day’s incarnation of Gaga.  My feeling is that her character in the movie is as close to “Stephanie” as she gets when she’s in front of a camera.  When she’s photographed, she takes on a version of her persona; she decides what she wants to wear and how she wants her hair and makeup done…and that’s it. About 25 minutes into the shoot, after looking at a few images on the monitor, she turned to everyone and said, “I’m going to go get a hat…I’ll be right back.”  She returned with a black bolero which she used as the perfect exclamation point to the rest of her outfit.

Tell us put the image with her finger on her nose.
Another collaboration.  I asked her to go into a profile and once there, she very slowly ran her index finger down the length of her nose.  All I could do was try to keep up.

How much time did you have?
We were told we had an hour with her…but after 20 minutes we had an incredible array of imagery…and we kept going for another 20 minutes.  And from 1438 frames I turned in 99 First Selects.