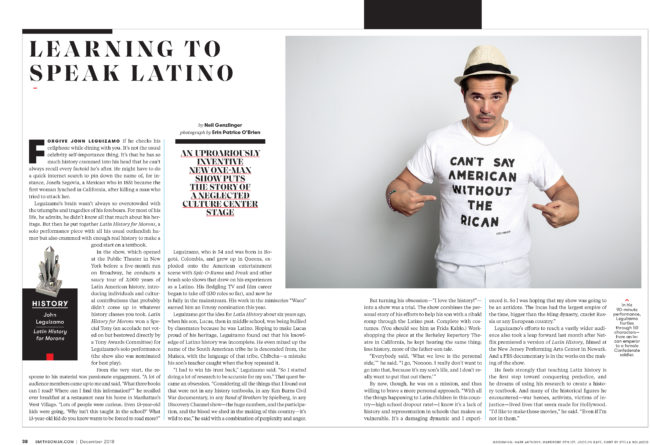 Heidi: What is your association with designer Stella Nolasco?
Erin: The day before Hurricane Maria , my college friend Stella Nolasco called me crying. “Its going to be really bad”.  Stella was in Rome to try a treatment for her younger daughter who has asthma.  Her Italian husband Sandro and her older daughter Daniella were at home in Puerto Rico. In the months after the hurricane Maria struck. We watched in horror as there was no electricity telecommunications for months. Everyone’s home was flooded, many of Stella’s staff lost everything. 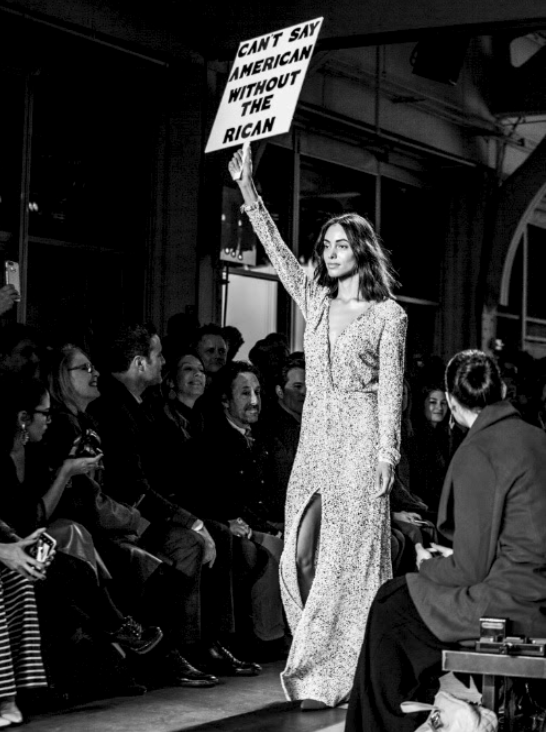 How did the fashion show come about?
Stella was able to keep some of her employees working to sew her collection with a generator when she was offered to show at New York Fashion Week to promote Puerto Rico.
The fashion show began with a video by the Foundation for Puerto Rico, featuring islanders rebuilding and inviting mainlanders to come back. The models walked on the runway with a protest sign that said Can’t Say American without the Rican and We Are US Citizens. Without congressional representatives, it was apparent to me that the only way to keep Puerto Rico in the news and the Trump administration accountable was through famous Puerto Ricans posting on their instagram.

Tell me about the message on the T-shirt
When photo editor Jeff Campagna called me to photograph John Leguizamo for the Smithsonian Ingenuity awards, I was so excited. Leguizamo has a one man show which is currently streaming on Netflix called Latin History for Morons. Leguizamo has been an incredible advocate for Puerto Rico and I wanted the photo to speak to his support. I called Stella right away and asked her to design a shirt based on her runway protest sign for him. Leguizamo appreciated the shirt and recently has been using the image for his Instagram and Twitter profile. When we were design students at Drexel University back in the day, I don’t think we would have ever dreamed this up.

You have a deep interest in social issues with your work, how did this develop for you?
I enjoy photographing people who are helping others with their art or their service. It is inspiring to be around creative people who are making art to educate the public and make a statement. I do a lot of pro-bono work for different artists and organizations; sometimes it leads to paid work.

The Women’s March
I photographed Pratt professor and artist Gina Gregorio’s wood stenciled head pieces for the Women’s March in 2016. The profits from selling them went to Brooklyn Community Services.

Planned Parents
I worked with Michaela Angela Davis and Michelle Willems to do a social media campaign to show PP support for an important and often overlooked issue: accessible healthcare for women of color. The campaign dubbed #LiberatedWoman aims to draw attention to the lack of visibility and care given to minority women’s reproductive health, especially in disadvantaged communities.

Nordoff Robbins Music Therapy Foundation
I spent a few days at making a photo library to show the clinical work their musical therapists do with their clients. Their therapists work with a broad range of people, including children with autism and other special needs and individuals under psychiatric care.

Resistance Revival Chorus
This is a collective of more than 60 women who come together to sing protest songs in the spirit of collective resistance. As soon as I saw them I approached them to photograph them. There is such joy in their group of powerful women.