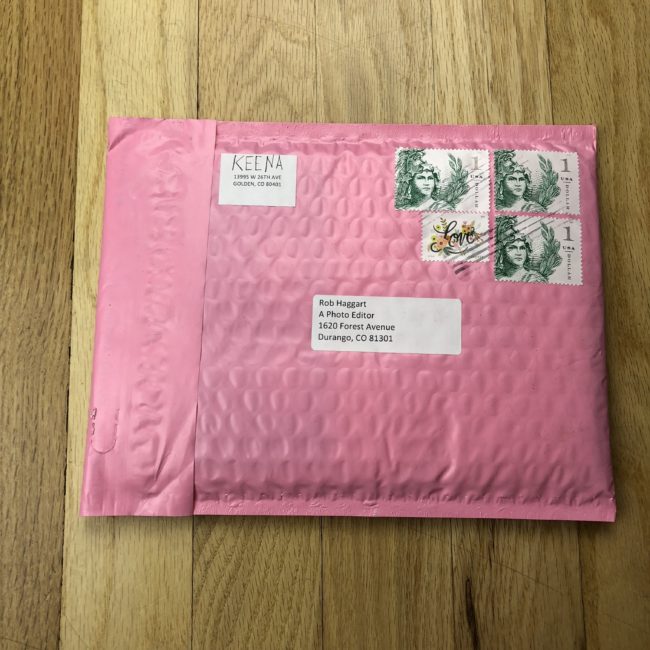 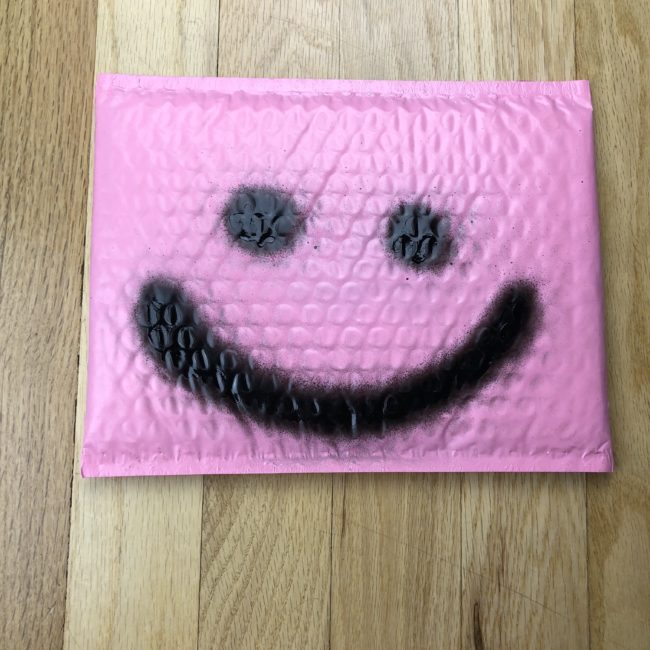 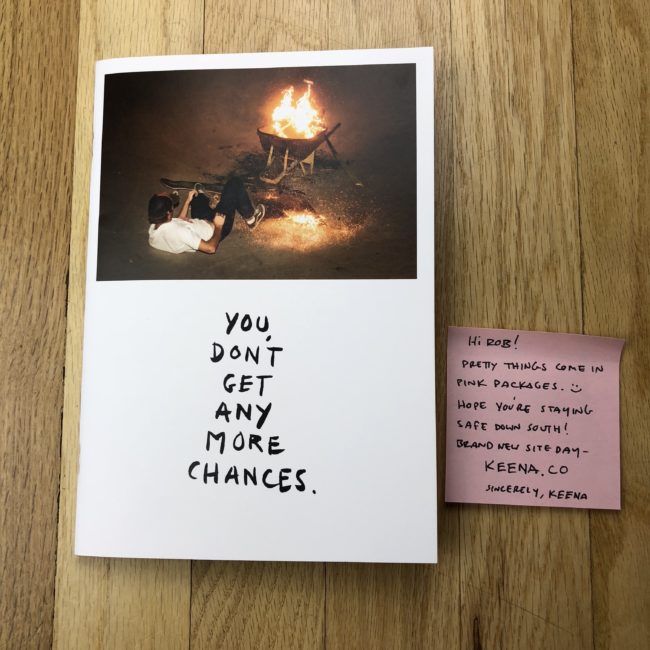 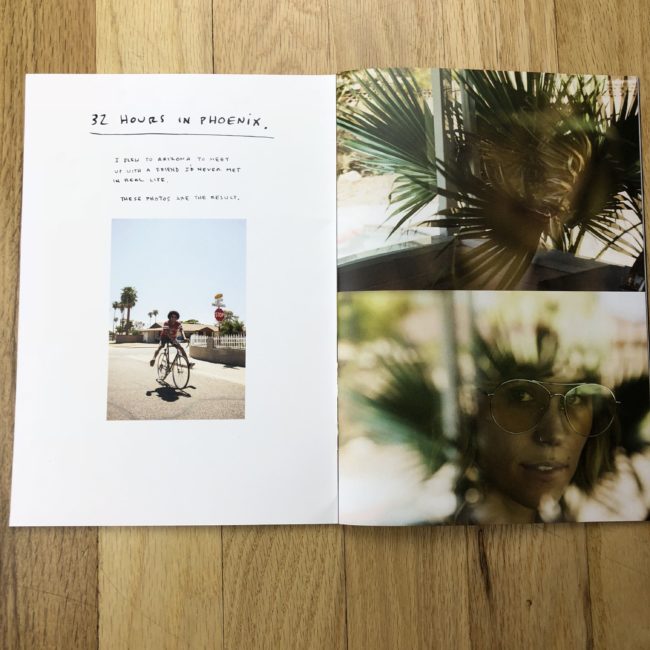 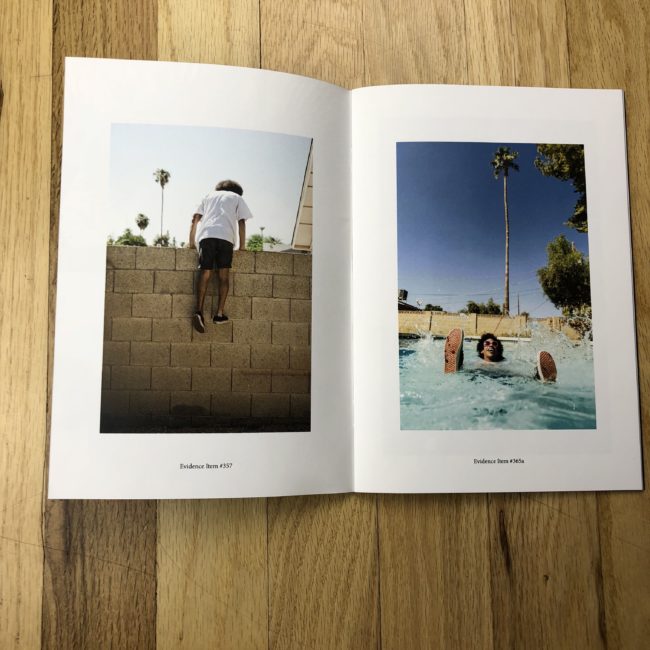 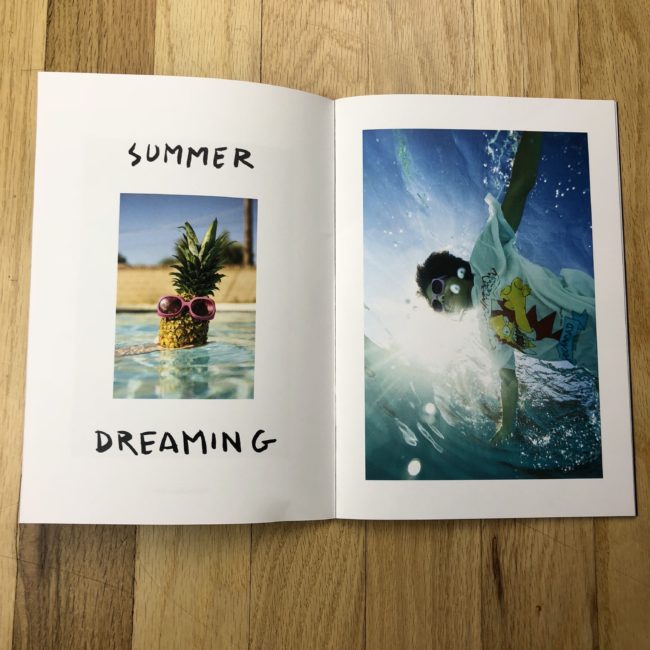 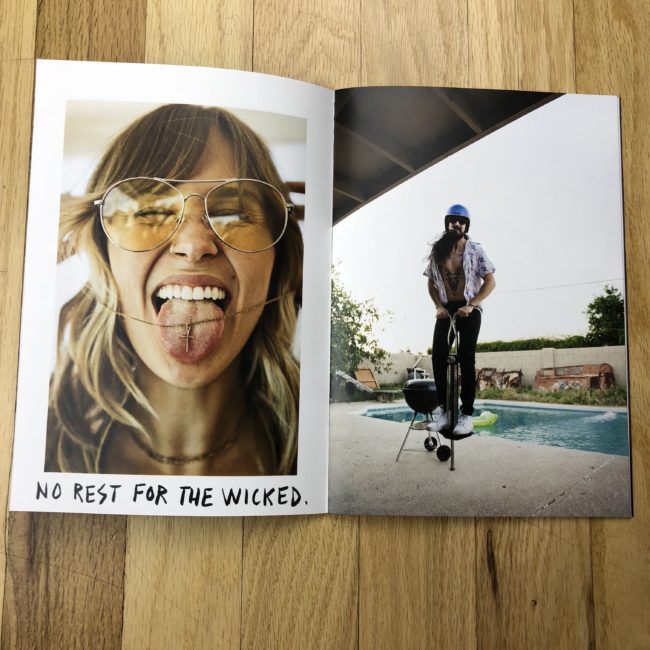 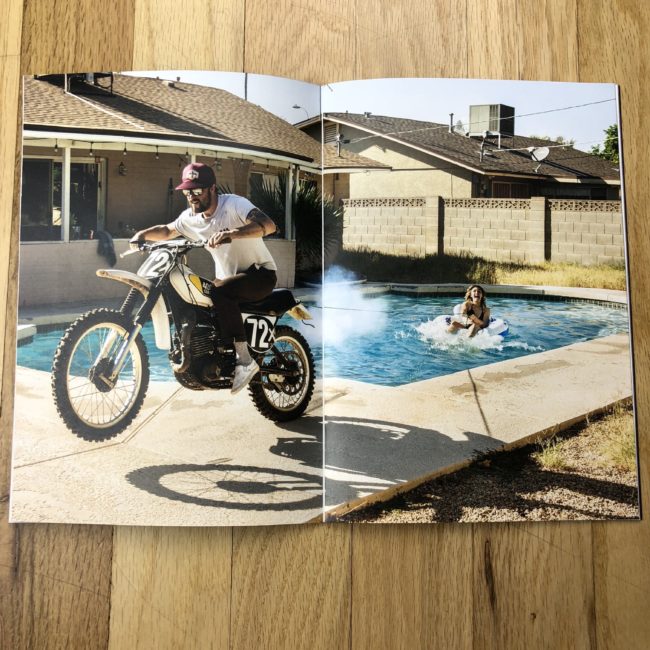 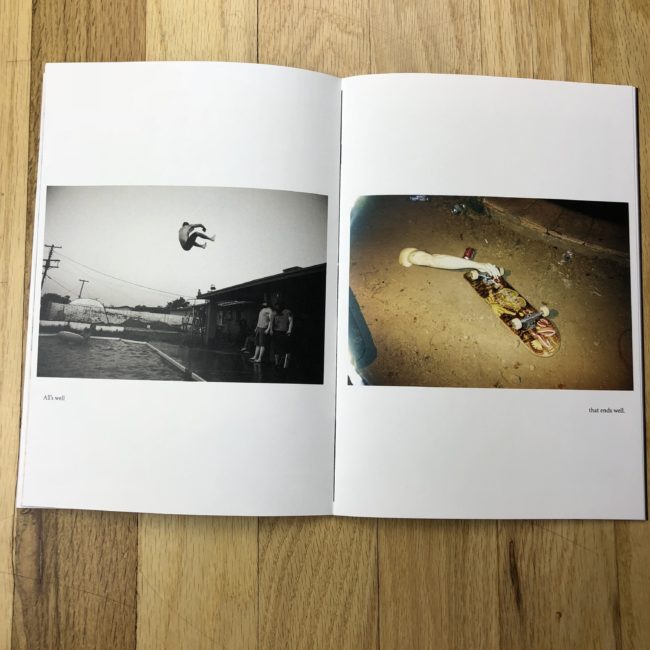 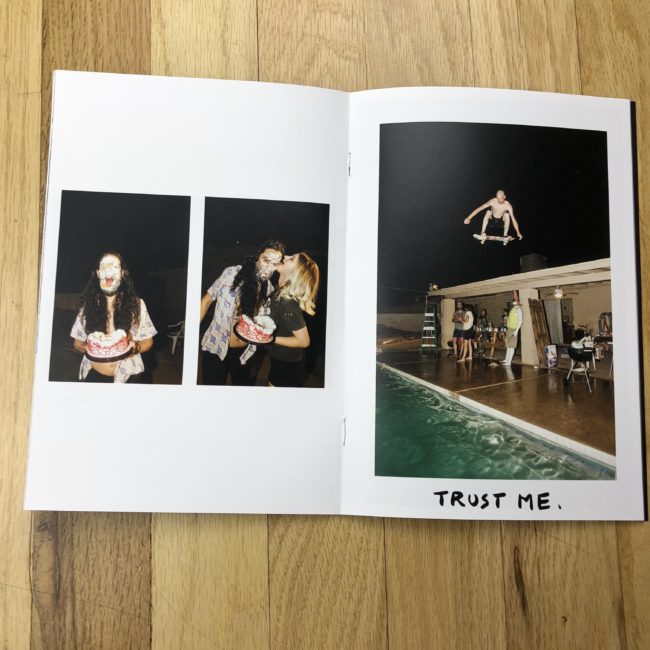 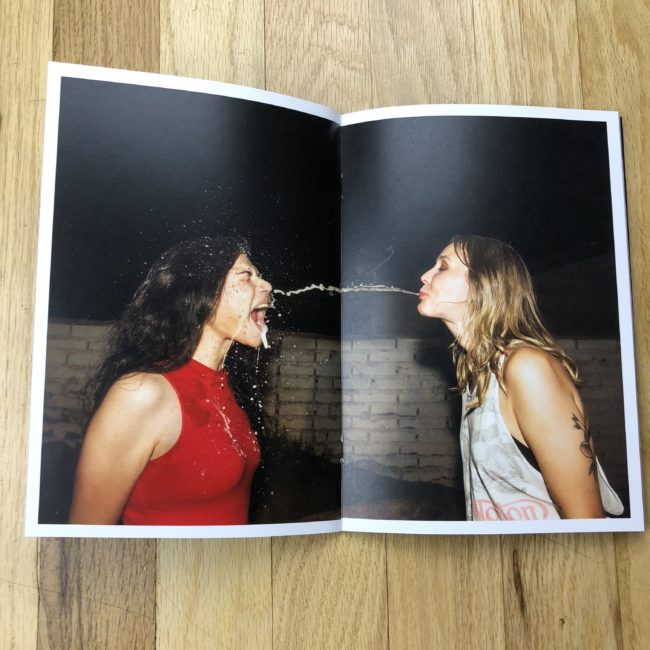 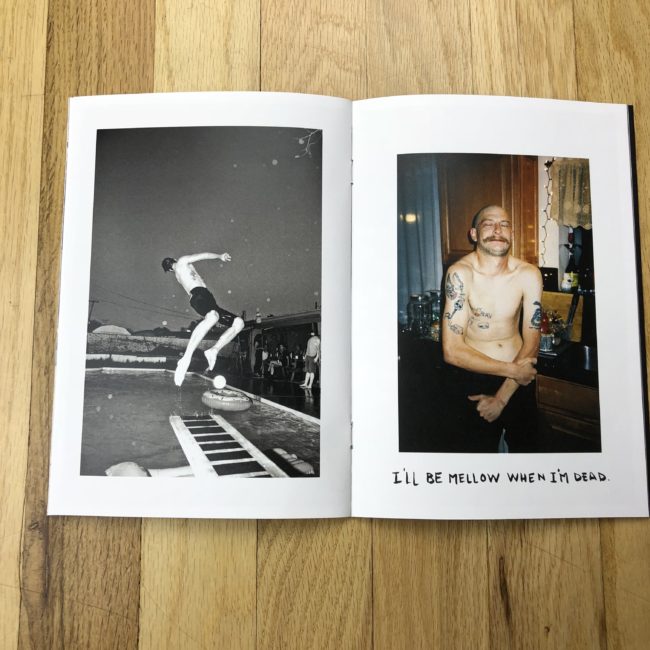 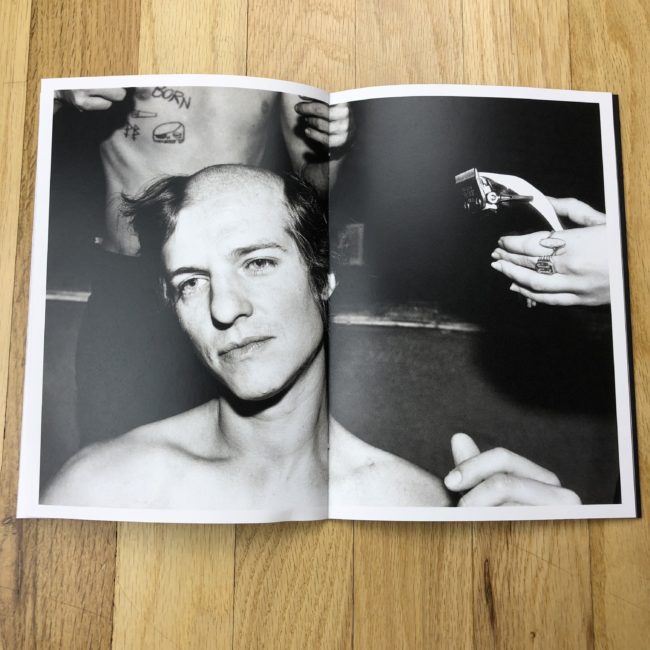 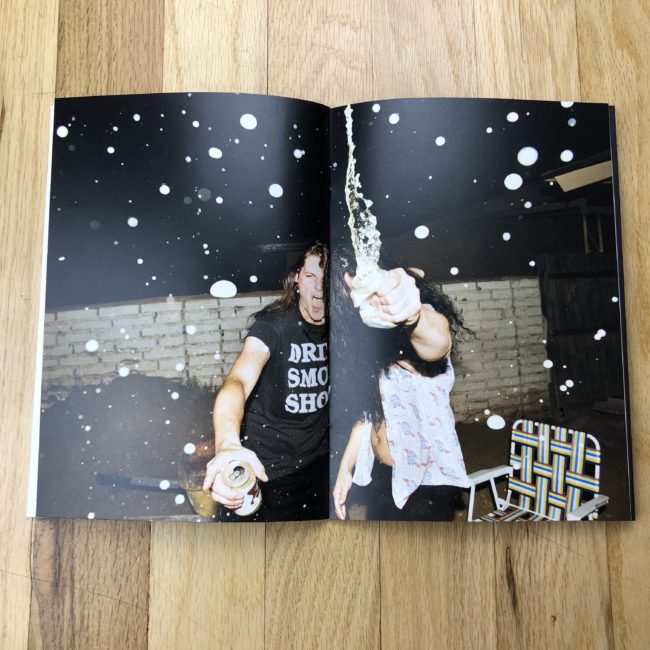 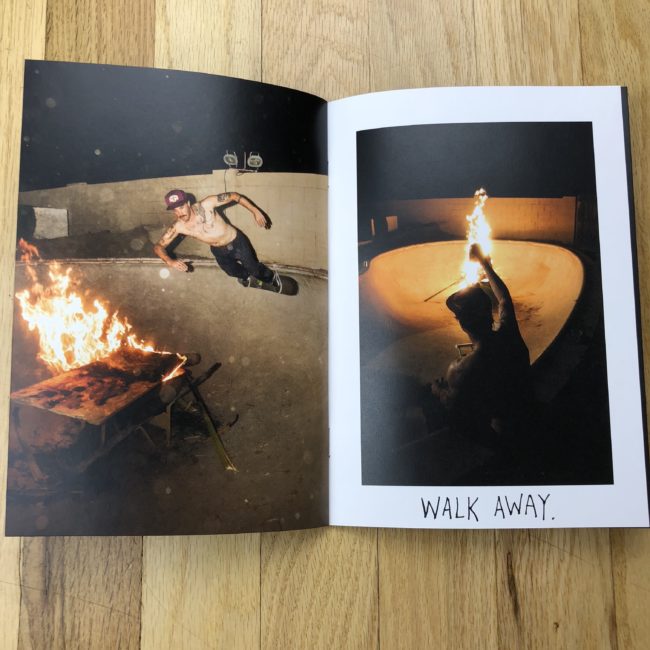 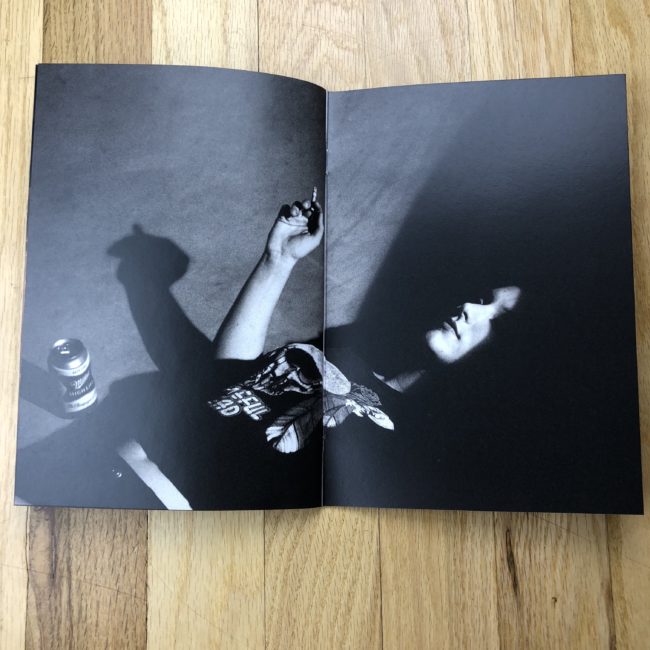 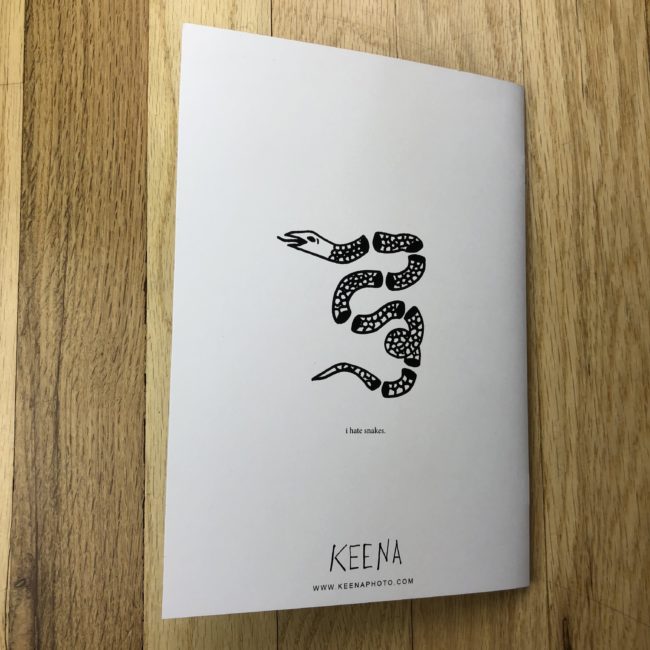 Who printed it?
AlphaGraphics in Golden, Colorado printed it. I had the hardest time finding a printer I could trust to get exactly what I was looking for. I’m slightly obsessed with getting the correct paper, the way the ink is absorbed, how the color reads and all of that, so finding a printer that really cared about the details was trickier than I’d thought. Also, the zine has a mix of color and black and white so it was important to find a printer that could keep their black and white images neutral, not skewed cyan or green. I’m glad I only had to go through the printer search once because it’s too much of a rollercoaster to get your hopes up to see your work printed like you imagined it and then have your heart broken over and over.

Who designed it?
I designed it myself. Art buyers get sooo many mailers these days, and they’re all SO good, so it’s definitely a challenge to stay out of the recycling bin, but I love it. It pretty much comes down to “What would I want to keep?”, so that’s what I strive to make. I just imagine a huge pile of mailers on someone’s desk and then figure out how to actually stand out from it. I do zines for all my promos and every one is different, but still the same size, so I dream about people keeping them all on a shelf somewhere. Design can also make or break the photos, so until I meet some rad designers I can trust, I’m still in charge of my own fate. I also love writing out words and drawing so these zines give me the chance to do some of that old-school hands-on work. I still spend hours with a pen and ink, writing words out over and over till they look just right.

Tell me about the images?
I had reached out to a stylist, Taura Deacon, when I was moving near her and we had really wanted to work together, but she was already in the process of moving away to Phoenix. So we stayed in touch and I ended up flying down to Arizona a few months later where her and her husband picked me up at the airport before midnight on Friday, we met for the first time, hung out, produced and shot all Saturday until midnight, and then I flew out at 5 am on Sunday morning. The whole idea behind this zine was exercising “teenage logic”. As a teenager, I remember so many ideas popping up into my head and then just rounding up my friends to go do them! Back then no one asked if it was a good idea, if it was cool, if it was safe, or if there were consequences, but we knew it would be FUN. I had put together a shot list and a location wish list and Taura street cast the people and found two dream locations- one for the day shots and a second with both a pool for skating AND a second pool for swimming for the night shots. The images are supposed to be very experiential feeling, like the viewer is at the party with their friends, not just watching it. Of course, it was a produced party, but I like to think that everyone partied as they normally would, and I was able to find the moments in there. The dirtbike shot has been a dream shot for a few years now so I’m beyond psyched to see it come to fruition. I also shot a lot of film and underwater housing for this, which is also a fun part of promos made from personal work. You get to bring out all the toys and be as creative as ever.

How many did you make?
This zine was a run of 350 total. A limited run of 200 to send out to specific people I’ve worked with or want to work with, and then I kept 150 for meetings and my library at the studio. They’ll all find a home eventually, but I believe in “less is more” for promos. I think each mailer should be intentional as to whose hands it ends up in.

How many times a year do you send out promos?
When work and life are in balance, I try to do two zines per year, but on busier years I’ll just do one because they definitely take a lot of time to plan, execute, design, print, and mail.

Do you think printed promos are effective for marketing your work?
I’m never positive on how effective they are, but I think that if I get one good job out of them, then at least I didn’t lose money on it. Plus art buyers get so many emails that I think printed pieces are something special if you put the time into them. Sometimes printed promos seem like screaming in the dark, but it seems common to go into meetings and have people tell me they still have my past zines, so that keeps me believing in them. These days it’s also important to show agencies that you’re creative beyond just using a camera, and printed promos are great for that because you have to inject some of your personality into it. I’m always super inspired when I see other photographer’s killer promos so I constantly feel the burn to try to make something rad as well.

All business numbers and returns aside, mailers are super important for me to get out for me to feel creatively balanced. I’ve always loved photo zines and photo books since I was a kid, so now I have the photos to really fill out a zine and the resources to get them printed exactly how I would want to, how could I not? We’re living in such a digital world now and I grew up on analog when everything was handmade and hand printed, so it’s healthy for my creative brain to get my photos off the screen and into someone’s hands. If the internet died tomorrow, I’d still have zines out there with my photos in them, and for some reason, that feels comforting. I always hope that the types of agencies and producers that I’d want to work with still appreciate the process and the tactile feel of getting a zine on their desk, the weight of the paper, and the story behind it. If I was only shooting for money and never for fun, I would definitely burn out on photography as a career. Seeing people’s reactions to the zine always makes it worth to me and having a promo with a good story behind it also sparks some awesome conversations when doing meetings! I’ve already got the next two zines in the design phase and I never want to be predictable as a photographer, so they’re all different subject matter, but shot and designed to have my look to them. It’s a never-ending cycle of dreaming and making but it keeps me so excited about shooting and creating that I would never stop doing promos.