I keep it real hear at APE.

In a 7-year-weekly-column, (and 8 years of service overall,) you’re bound to repeat yourself now and again.

I know I have.

One story that maybe doesn’t come around often enough, though, is how I came by this philosophy of honesty. (By now, perhaps I’m equated with it.)

The truth is, it wasn’t my idea.

When Rob first hired me, in 2010, and then proposed sending me to NYC to cover the PDN Expo, he gave me one particular piece of advice.

“Be as honest as possible,” Rob said. “Sure, it will turn a few people off, and maybe you burn a bridge or two. But you’ll gain far more than you lose by being honest, and most people will really respect you for it.”

Despite the quotation marks above, I admit this is a paraphrase, but I have a good memory, and this was a seminal conversation in my life.

I’ve had more than a few people approach me over the years and say they felt like they knew me, because of the way I write this column. I take that as a compliment, and don’t intend to change any time soon.

So here’s the fresh news: I just finished a two week run in which I was working 12-18 hours a day on Antidote.

I’ve worked non-stop, dating back to my workshop in LA last month. Basically, I’ve never been challenged as much professionally, and thankfully it all seems to have come off well. So after I write this column, (and do an interview for the NYT,) I’m calling it a day, and taking a long-deserved rest.

My major lifelines at the end of Antidote, when I was REALLY dragging, were my two buddies, Caleb Cain Marcus and Kyohei Abe, who were on the faculty for Session 2. Seriously, you couldn’t ask for better friends, (nor teachers,) as they inspired our students, and helped me figure out how to grow as a leader.

In addition, they each gave artist talks that entranced our students, as the through-lines between their evolution as artists were so clear to behold.

I met Caleb at FotoFest in Houston in 2016. In an otherwise unsuccessful venture back across the table as an artist, I made a truly great friend, and that is worth more than its weight in chicken feed. (Odd metaphor, right? I told you, I’m fried.)

I’d previously reviewed his brilliant book, “A Portrait of Ice,” but we’d never met or spoken. I can go back and date when I reviewed his next book, “Goddess”…

Basically, I reviewed this guy’s last two books before I ever knew him.

But now he’s one of my best friends in the world, and was instrumental in helping me build Antidote from nothing.

So as I begin this review, honest about my connection to Caleb Cain Marcus, you can decide whether I’m biased about the impending “A Brief Movement After Death.” (By Damiani Books)

Being honest, I’ll also share that I prompted him to write the excellent, brief, foreword, and I also edited its text.

Can I be objective?
Now that you know?

Well, I’ll photograph the entire book below, so you can decide for yourself.

Am I hooking up a friend?

Or writing a review of the perfect, slim, (and perfect-bound) little volume for a short review today?

The title, and “heavenly” cover, tip us off to the book’s meaning, but that aforementioned foreword gets right to the point. These skyscapes, in ethereal colors, contain little repeating specks that look like flocks of birds, but are in fact the renderings of a pendulum-like grease pencil, swinging above the surface of a print.

The pictures, together, are ruminations about what happens to our souls after we die, as the artist contemplates his demise as his young daughter grows before him.

The title and the text direct the read here. The colors and skies could imply different things, under another context, but we know where to go because we’ve been told.

As for those bird flocks, they could also represent groups of souls, or the disconnected embodiment of even one soul, floating up to heaven. (Or whatever you might call the after-life.)

The pictures move up the page, and jump from side to side, in an obviously constructed rhythm. The colors, cool blues and warm oranges and yellows, provide contrast right out of color theory.

Just as I thought to myself, “I think this is enough pictures,” the book ended. Literally, that was the last page. So just as last week’s review was an example of getting the picture volume right, so is this. (But in the opposite direction.)

Honestly, I don’t know where we go after we die, and neither does Caleb.

But I do know that books like this can make us think and feel at the same time. The question, the premise, gets inside our head immediately. (It sets the tone, as does the placid cover.)

And the color speaks on an emotional level.

I’ll leave you contemplating mortality, today, and hope you enjoy your summer holiday.

To Pre-Order “A Brief Movement After Death” click here 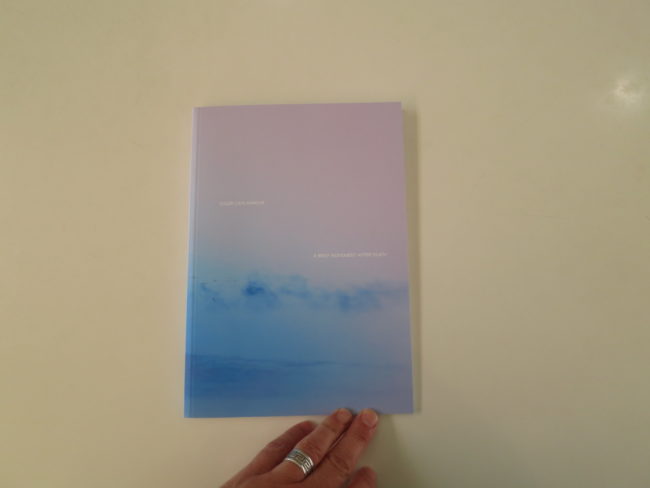 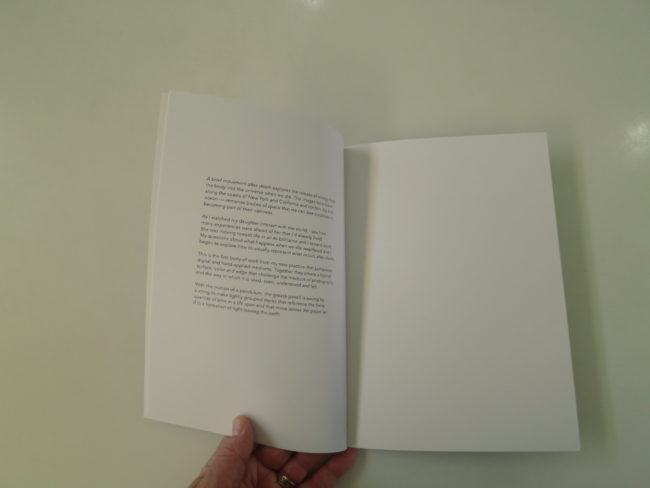 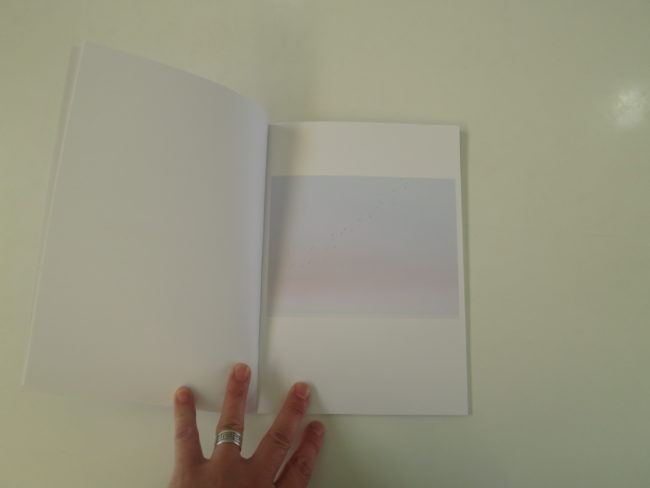 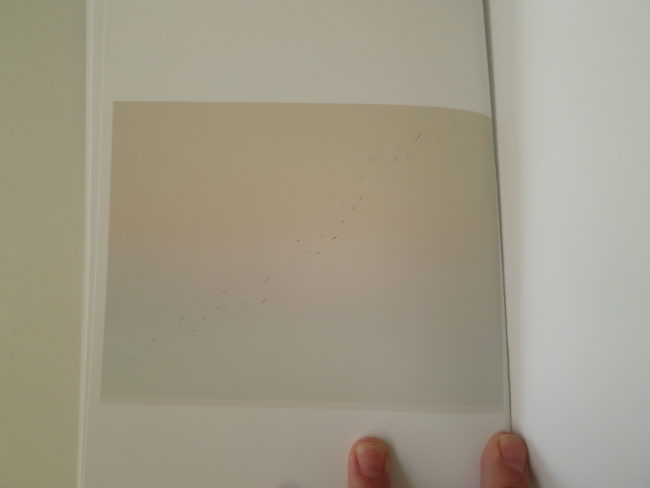 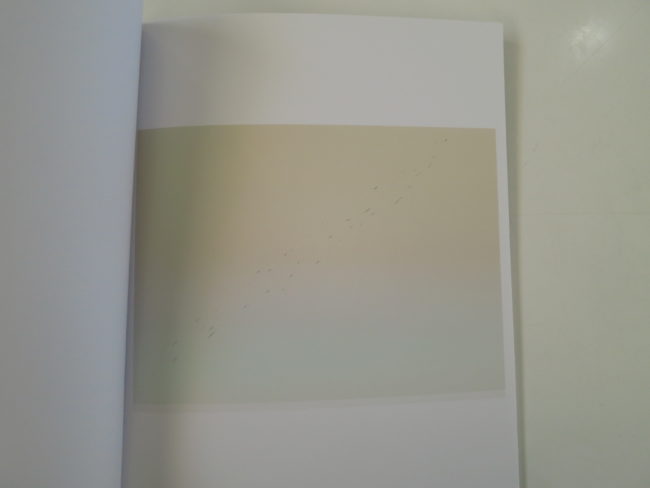 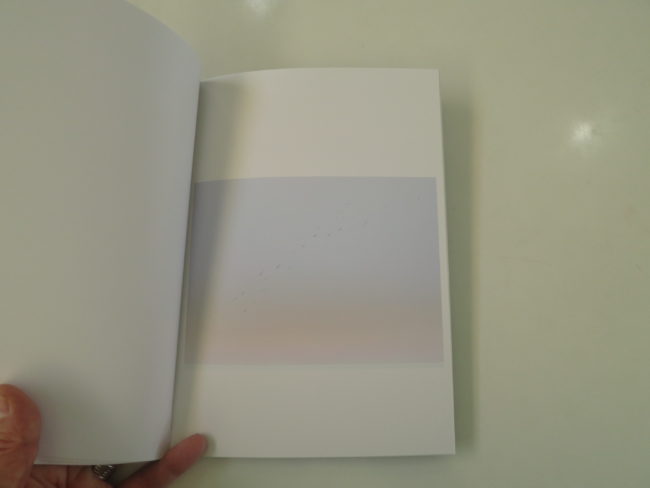 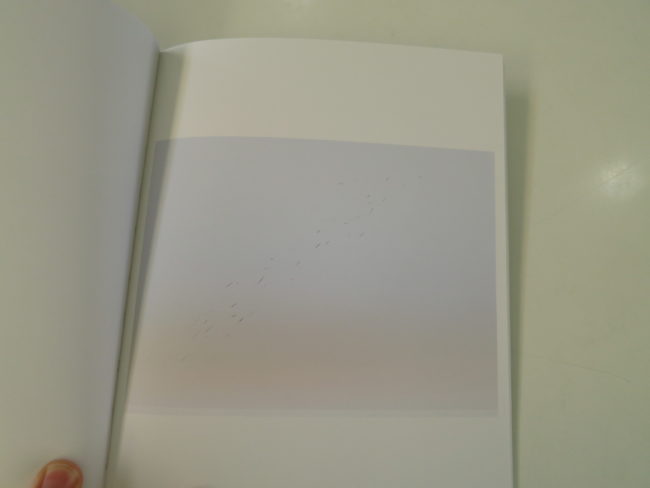 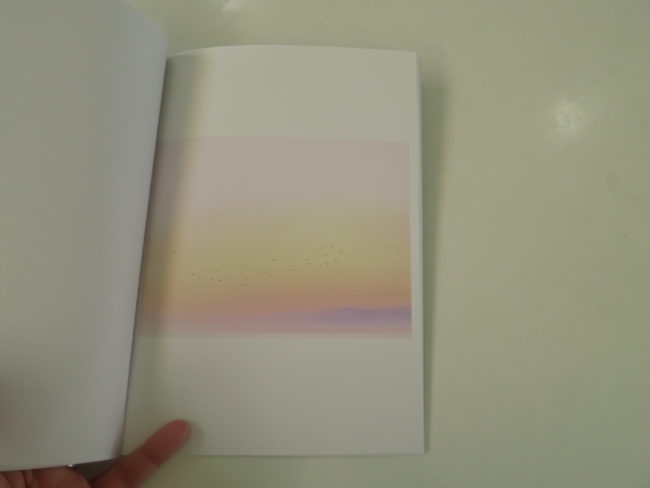 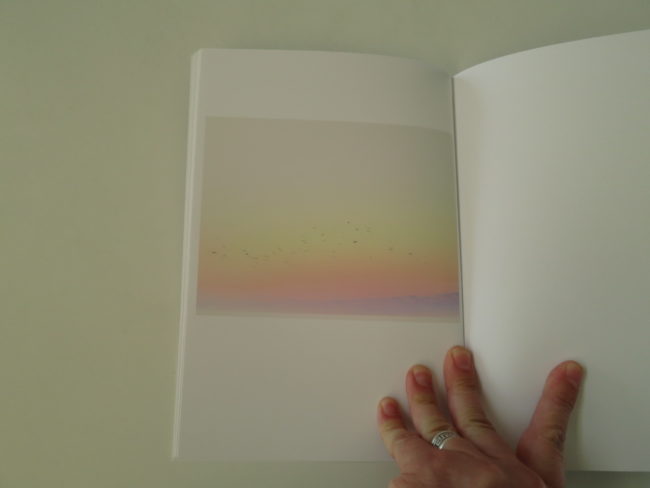 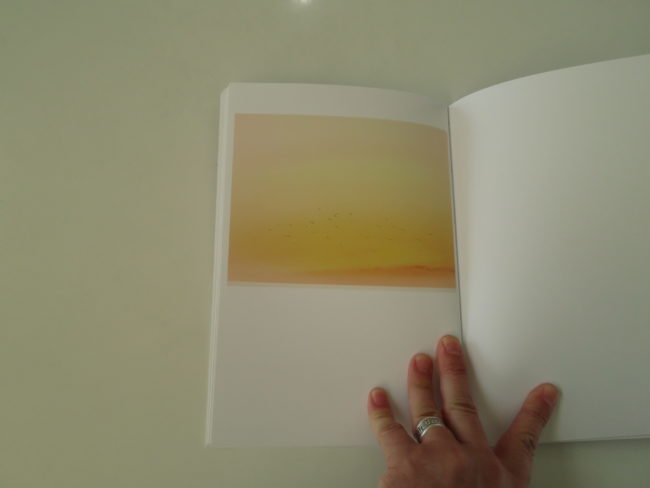 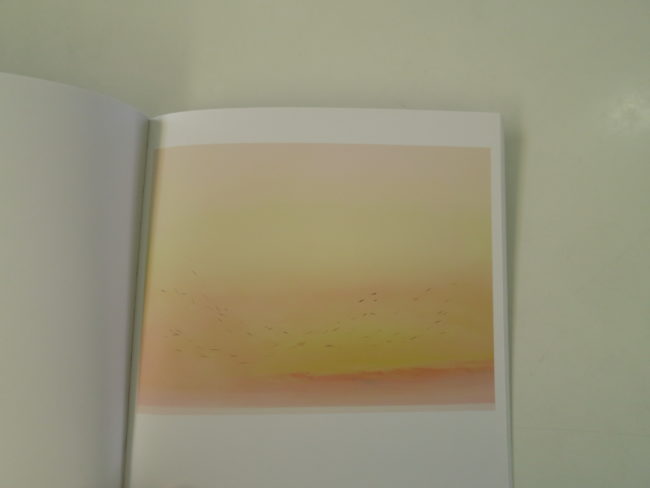 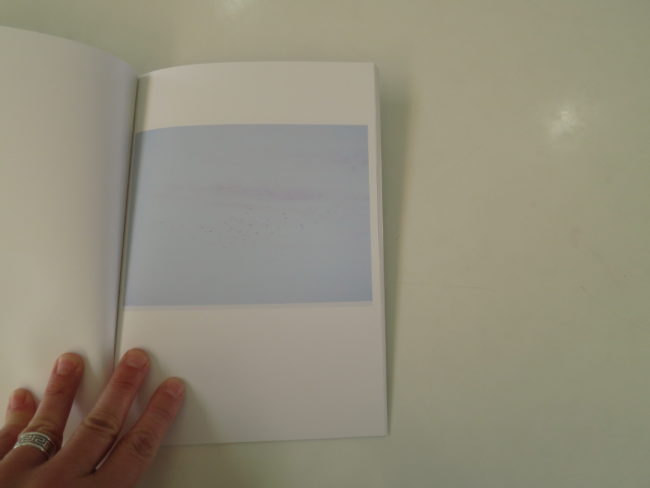 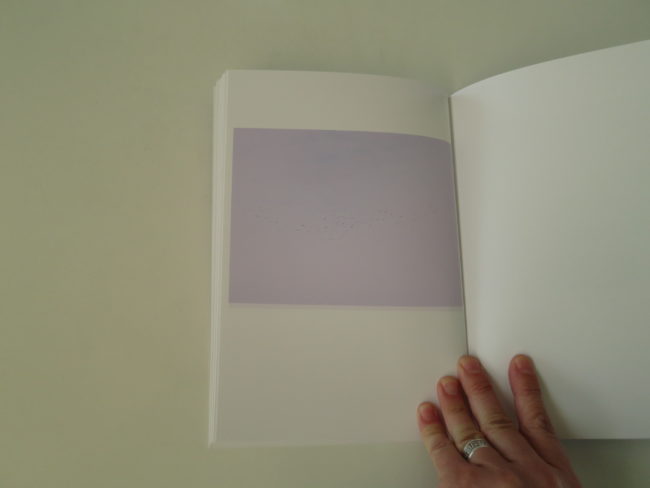 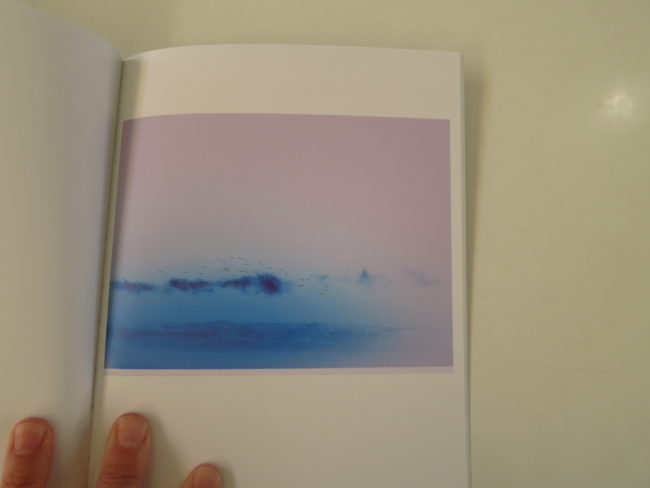 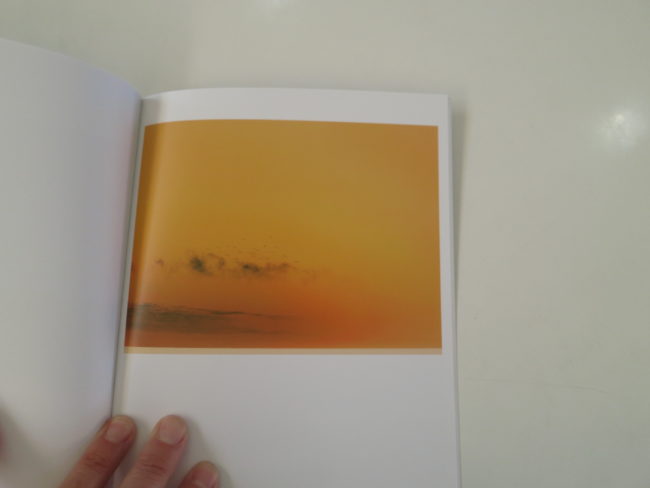 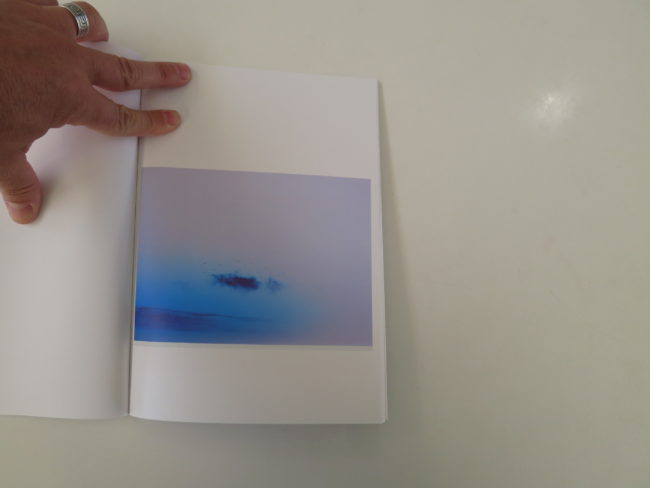 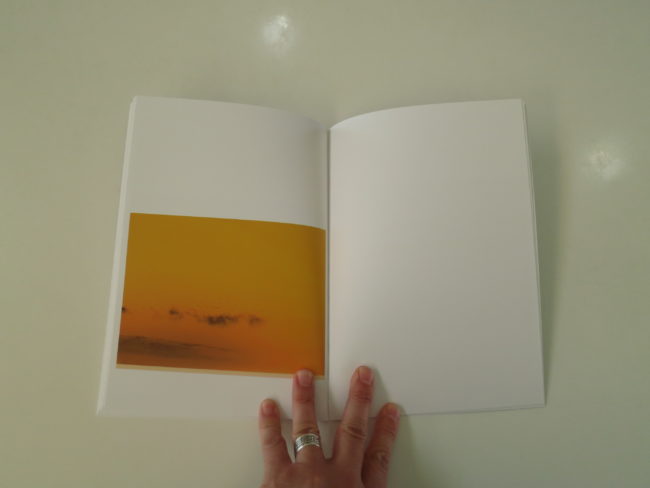 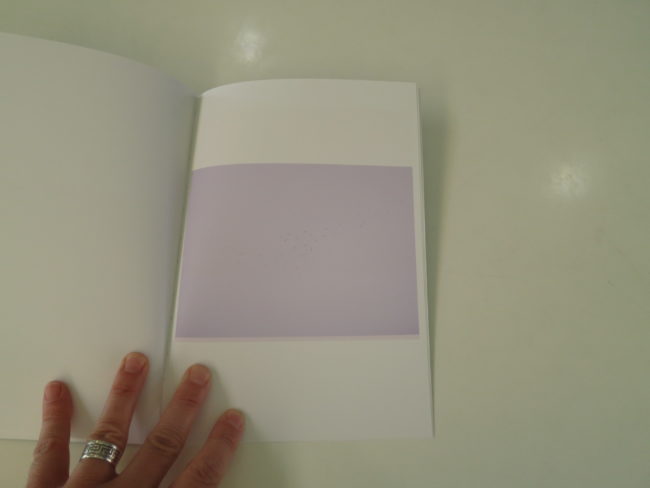 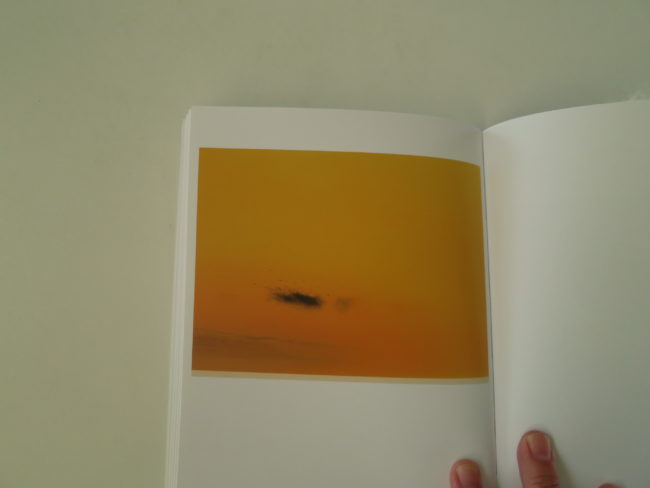 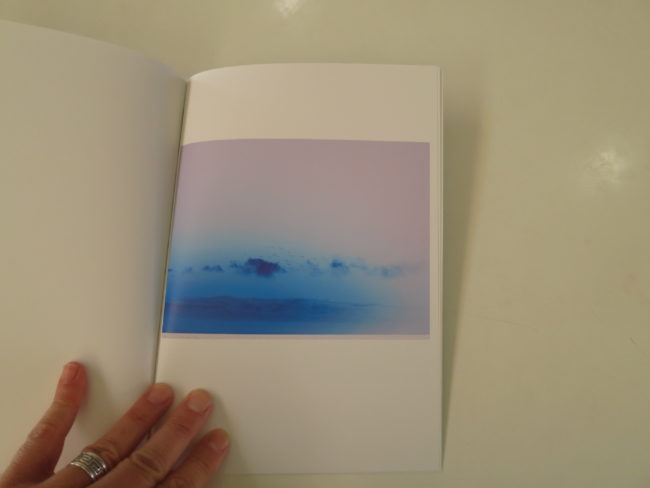 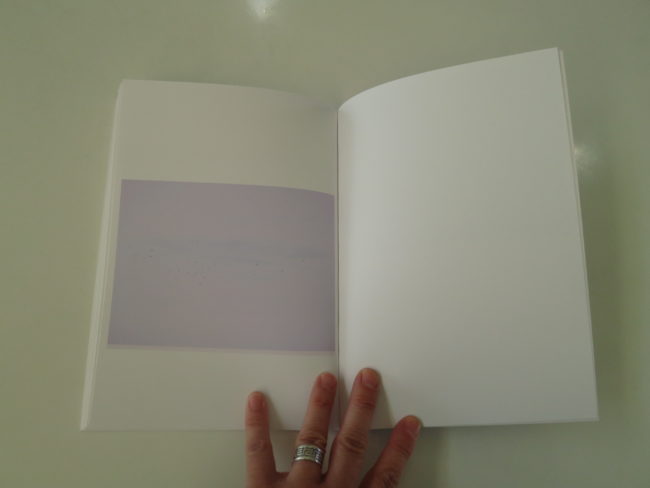 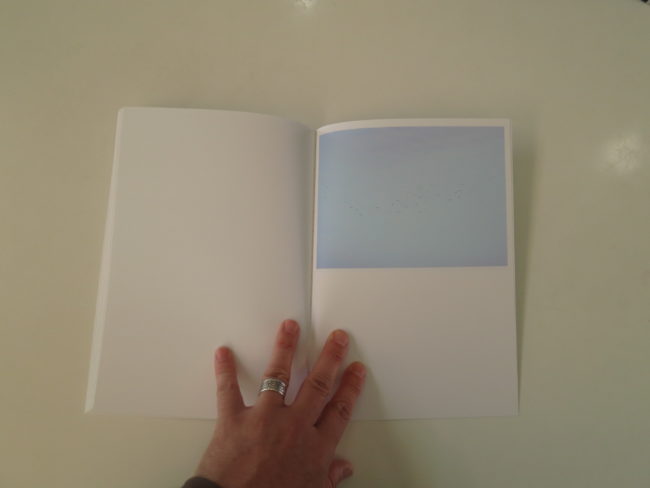 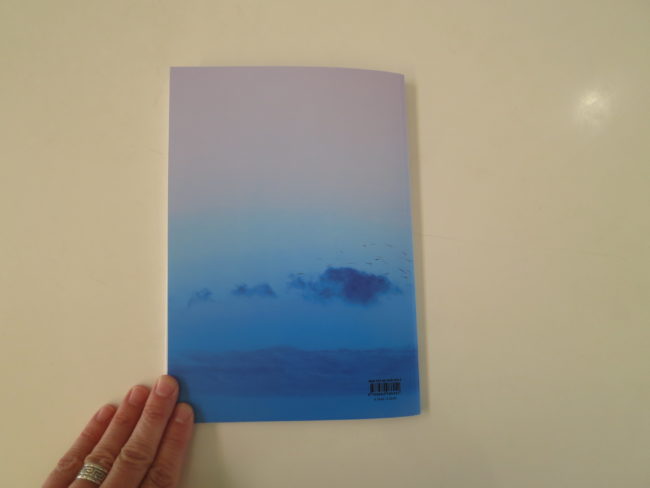 If you’d like to submit a book for potential review, please email me at jonathanblaustein@gmail.com. We are particularly interested in submissions from female photographers so we may maintain a balanced program.