It’s cool to be funny.

It’s why a female comic with frizzy hair and a high-pitched voice went from little-known, to globally famous a few months ago. As I don’t regularly watch The Daily Show, (despite what a recent column suggests,) I certainly hadn’t heard of her before the Huckabee-Sanders-Kerfluffle of 2018.

(Try saying Huckabee-Sanders-Kerfluffle five times fast. I could only make it to four.)

Anyway, I was re-watching “Back to School” with my son last night, and unsurprisingly, it held up. (As did “Dirty Rotten Scoundrels,” which we saw last month.)

Rodney Dangerfield, a fellow Jew, was a genuinely strange-looking guy. From our contemporary vantage-point, there is no f-ing way that anyone who looks like THAT would ever be the romantic lead in a comedy.

But still, Rodney pulled it off, bug-eyes and all. (Seriously, he bugged out his eyes A LOT.)

And Sam Kinison, another not-looker with very strange style, (and crazy hair,) also held his own on the screen. (They don’t make them like that anymore.)

Funny has gravitas because it is often a coded way of speaking truth to power. (Or in Ms. Wolf’s case, not-so-coded.)

Funny allowed Donald J Trump to become the third most powerful man in the world. (Xi Jinping, Putin, then Trump, if we’re counting.)

Trump uses funny to disarm, but also because it allows him to say and do terrible things, and then deny he meant them.

“I was only kidding. Locker room talk.”

“I didn’t openly mock a disabled person, even though they caught it on tape.”

Funny is entertaining, and Trump honed his entertainment skills on NBC for ten-ish years before being famous and polished enough to claim his ultimate prize.

We all need to lighten up a bit, IMO, even in the face of a scary world. Because neither Trump, nor Putin, is coming into your living room this evening.

Nor are they coming into your kitchen. (Shout out to John Raztenberger, who’s an avowed Republican.)

It’s OK to have fun, crack jokes, and enjoy your life, even if you hate the President. Frankly, when I heard Tony Bourdain had killed himself, I wasn’t surprised at all.

In a recent episode in Uruguay, he’d said that Happiness was a sickness, and that he hated happiness and happy people. (I’ll find the segment and quote it, if I have time. It’s still on my DVR. I can’t bring myself to watch the episodes that aired since he died, nor can I delete them.)

Humor is powerful, but also a rational response to the irrational parts of human nature. Our logical brains are strong, but as much of what we do, and the outcomes of our collective efforts make no sense, (private prisons?) having a laugh, as the English say, can be wise as well as cathartic.

Speaking of English, I’ll have to ask Sigrid Ehemann why her new “Pussy Magazine” is written entirely in English, when she’s German. (Based in Dusseldorf.)

The obvious answer is that it’s the world’s default language, and she wants it read around the world.

Still, it’s curious there’s no German within, isn’t it?

No matter, because I absolutely love this new project, and if it weren’t in English, I wouldn’t have the chance to read it.

Sigrid sent in another publication last year, about a charming chihuahua, and I knew she had talent, ingenuity, and a great sense of humor.

I said as much here in my review.

This time out, she’s gone a step further and moved beyond Trump, (an obvious target for all of us,) and taken on the #MeToo movement, and the awful men’s behavior that spawned it.

Issue 1, which is by far the best, sets up the dynamic of image and text, which we had last time, but it’s pushed into a fashion direction this time. (Style credits and such.)

It’s aimed for women of a certain age, (older than 40,) whom society deems irrelevant. It tackles issues directly, whether grabby bosses, male/female pay imbalance, or the fact that women are still vastly underrepresented in exhibitions. (We see the statistic 10 men for every woman.)

Just yesterday, Jörg Colberg and some other colleagues on Twitter were questioning the demographics at Arles, where it was reported white-guy-exhibitions were totally dominant.

I chimed in that as it’s simply unacceptable not to have a more diverse representation these days, I went out and solicited more female submissions for this column directly. Outreach has made a difference, so ladies, please keep those books coming in.

“Pussy Magazine” is a perfect example.
No man on Earth should, would or could have made this.

And the world would be a sadder place without “Pussy Magazine.”

Like Sacha Baron Cohen pranking Sarah Palin, humor is sometimes the only way to get at an issue.

Speaking of issues, only Issue 1 here feels vital. It’s perfect, and as I looked through it, I wondered how it could be topped. (The answer is, it wasn’t.)

The first time out, the combination of the odd model, the insane bag-on-the-head fashion, and the text are shocking in their perfection.

Like “Glow” earning a “10” for Season 2, and then muffing the landing with a tone-deaf-2-minute-ending, (bringing its score down to a 9.90,) sometimes you have to know when you’re done.

Issues 2 and 3 felt like the second and third best ideas, and the repetition of the same model and style was just extra. There were two brilliant, laugh-out-loud-funny images in the 3rd issue, though, so editing is a tricky business.

I’m going to photograph all of Issue 1 down below, so you get a full sense of the rhythm of what Sigrid has done.

It’s so fantastic it should speak for itself.

But it definitely shows us why ensuring male and female artists have an equal voice is not just fair, but also to our massive benefit.

Pussy power indeed. (Can I say that?) 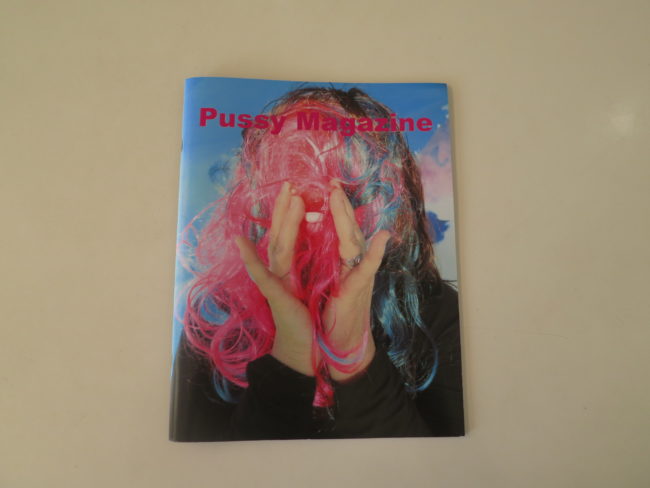 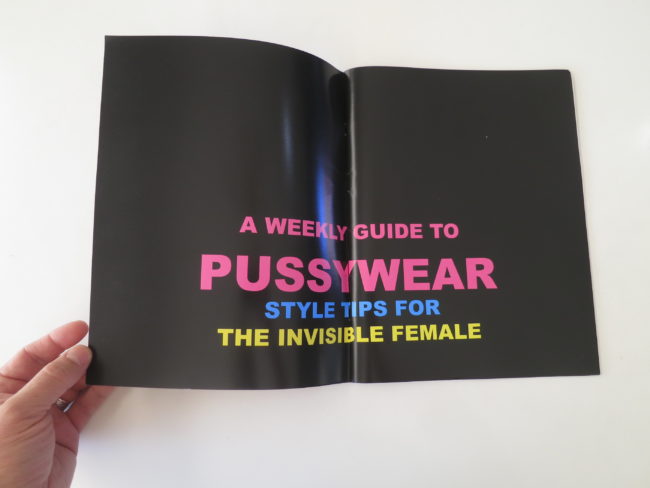 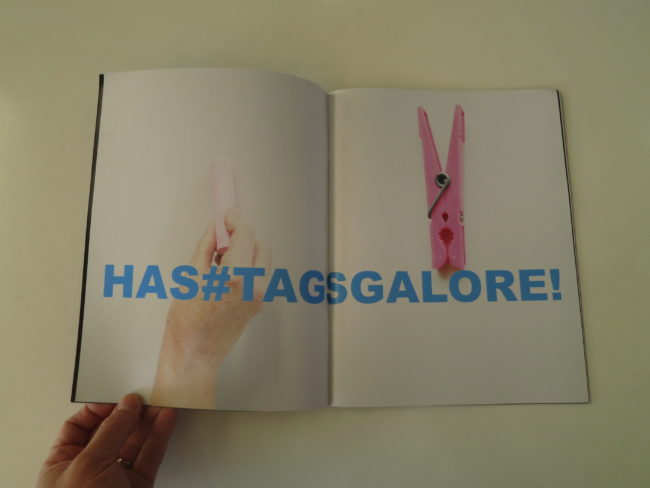 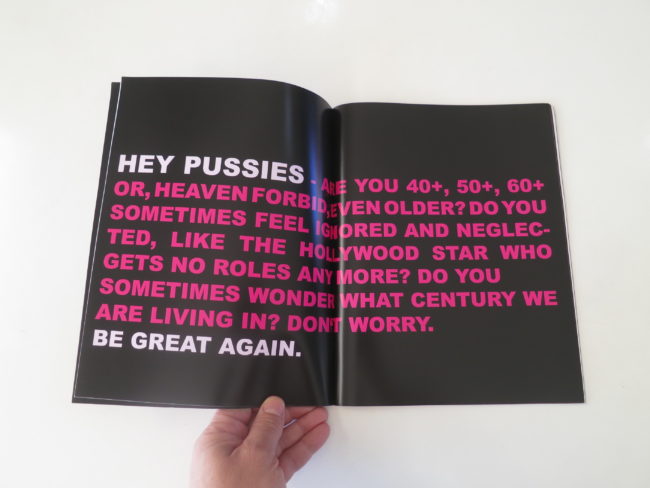 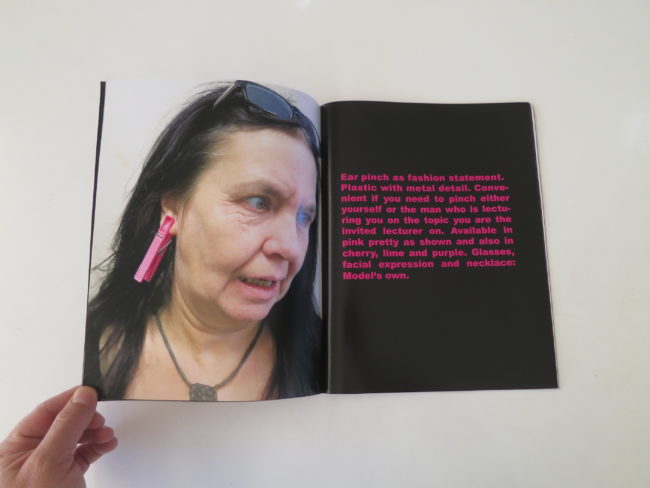 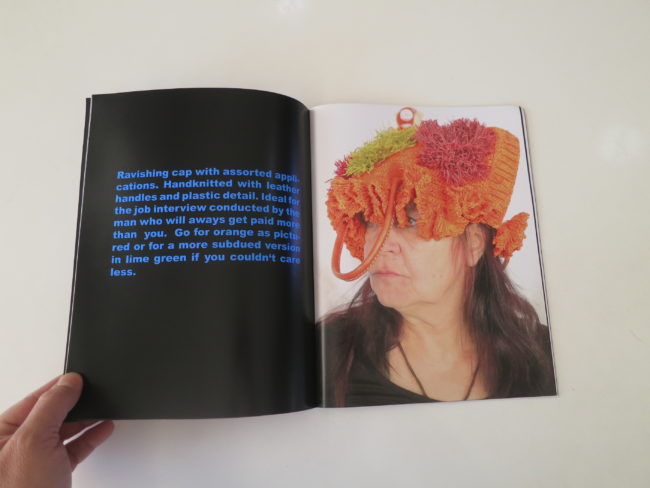 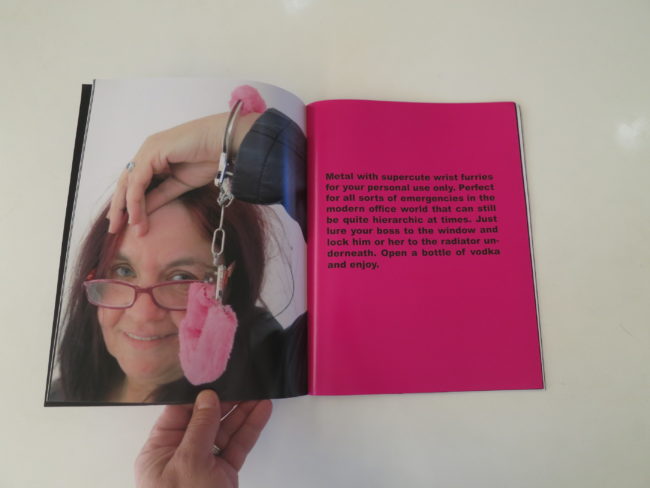 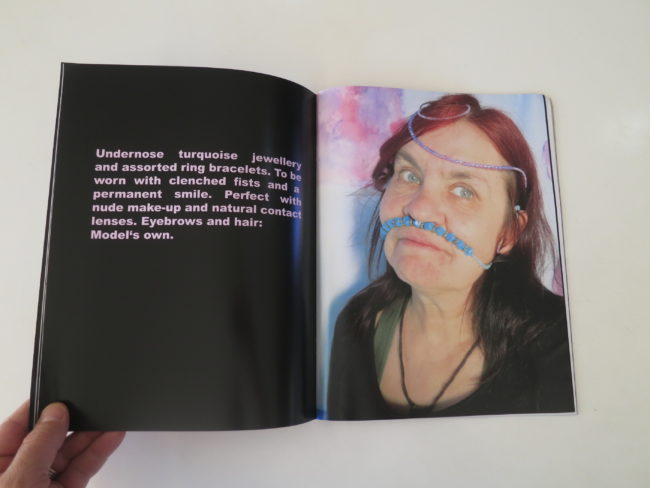 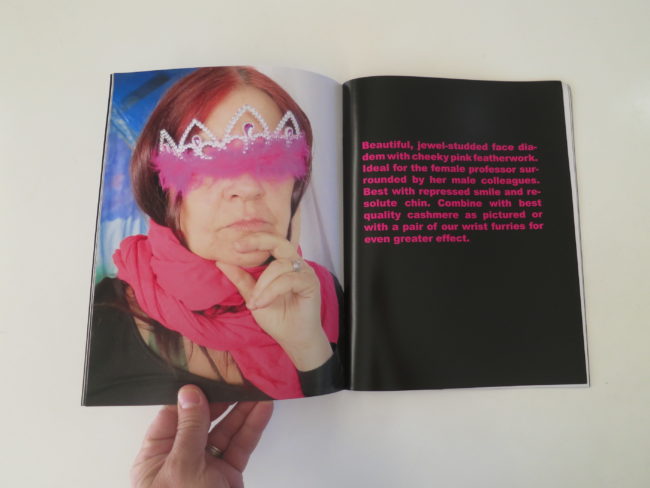 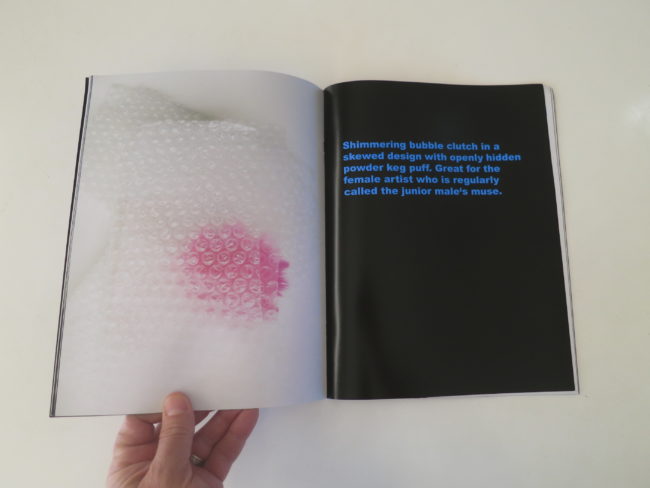 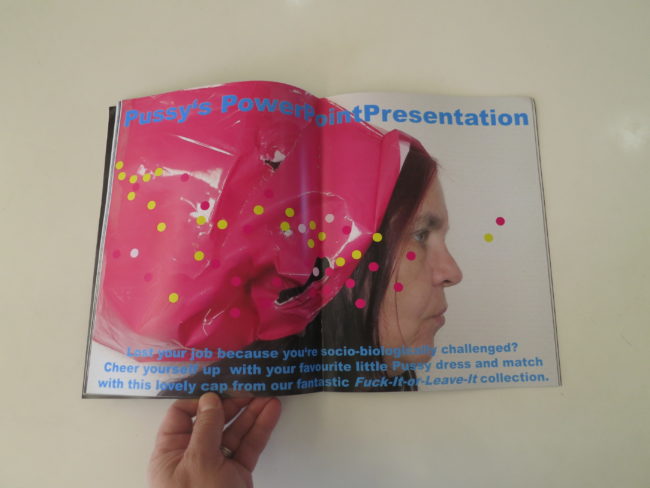 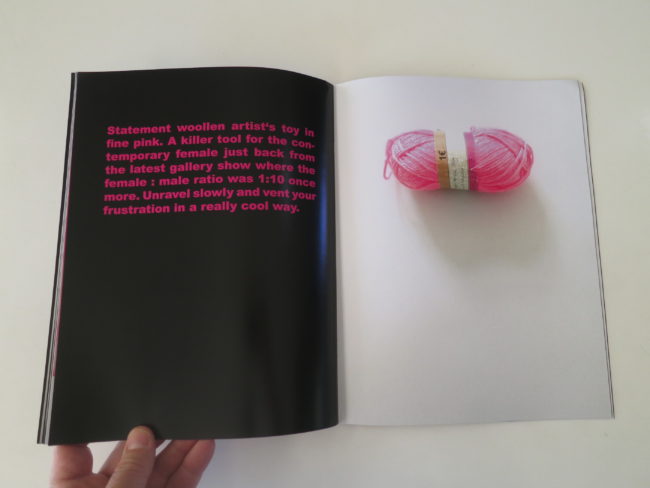 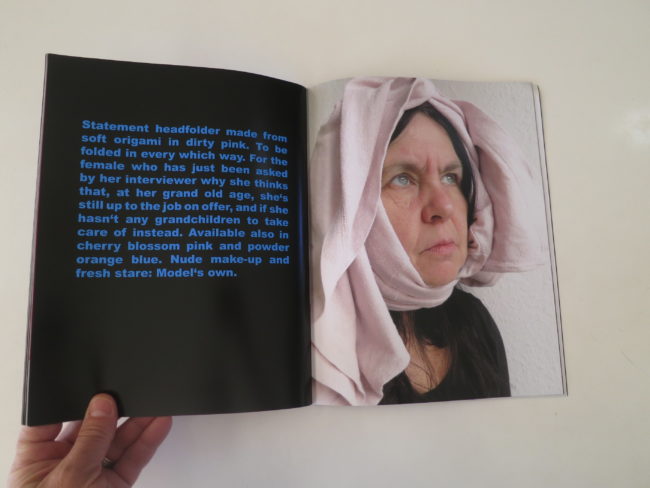 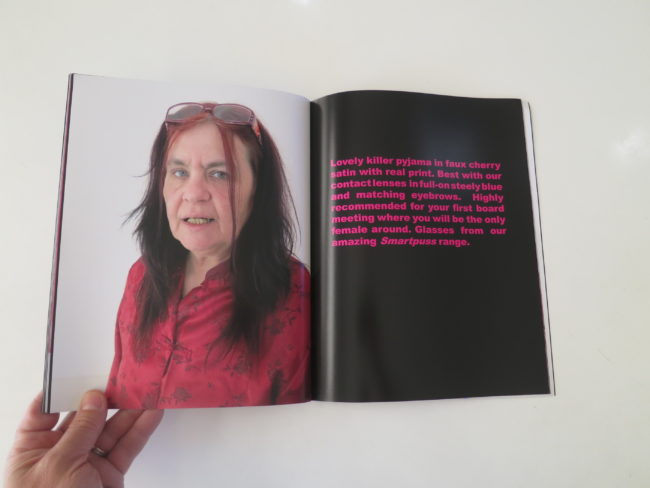 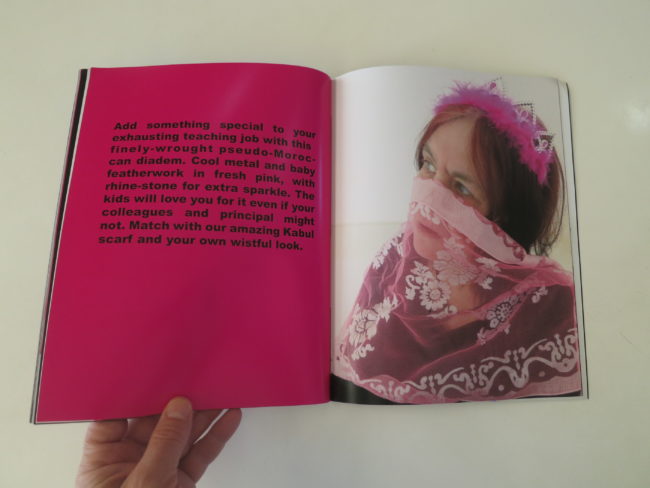 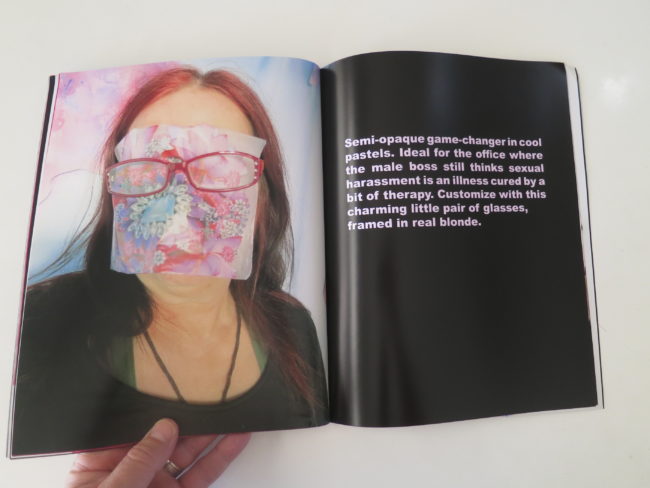 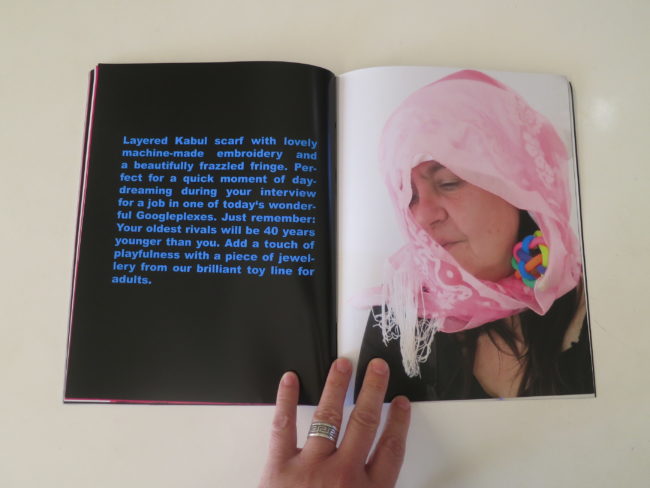 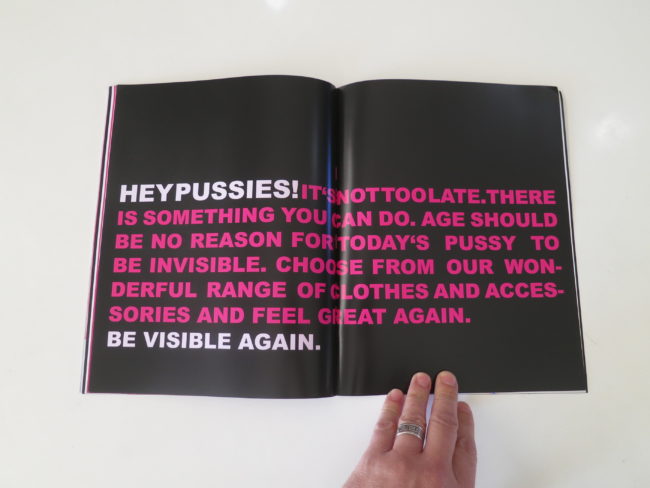 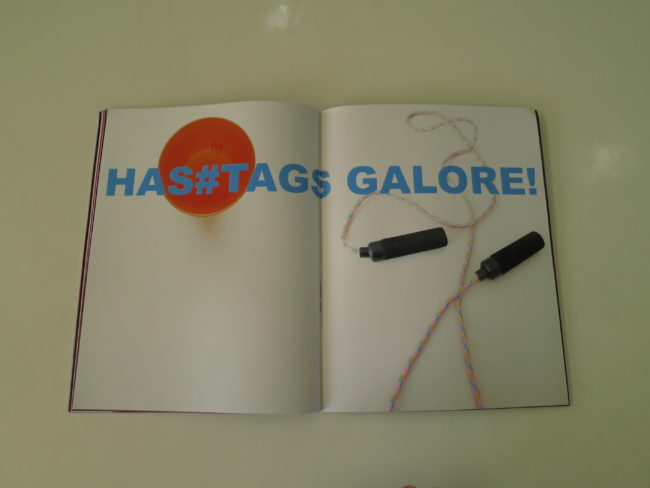 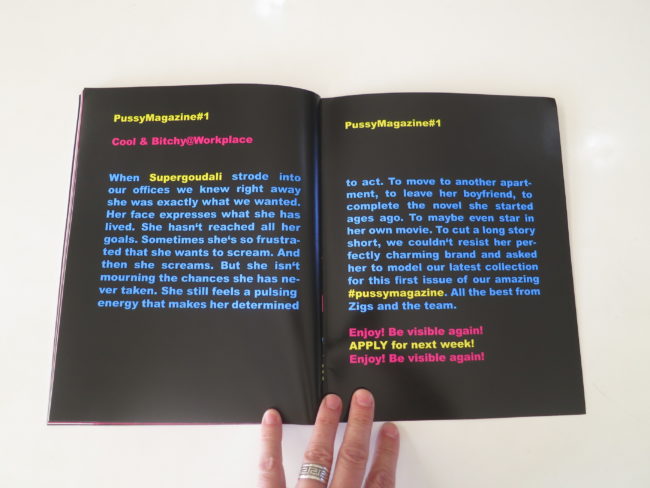 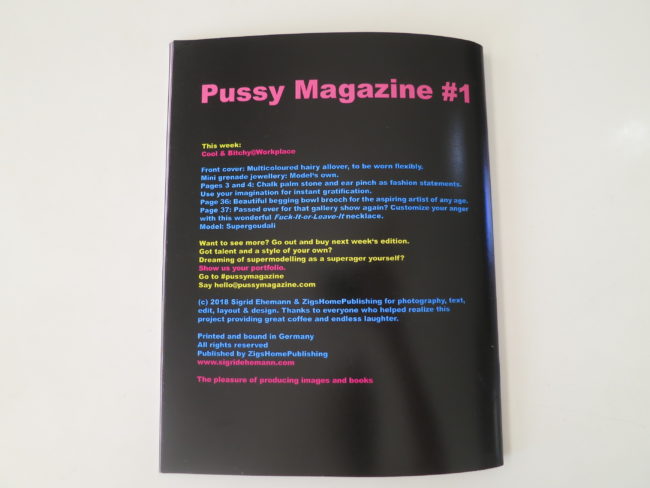 If you’d like to submit a book for potential review, please email me directly at jonathanblaustein@gmail.com. We are particularly interested in submissions from female photographers, in order to maintain a balanced program.