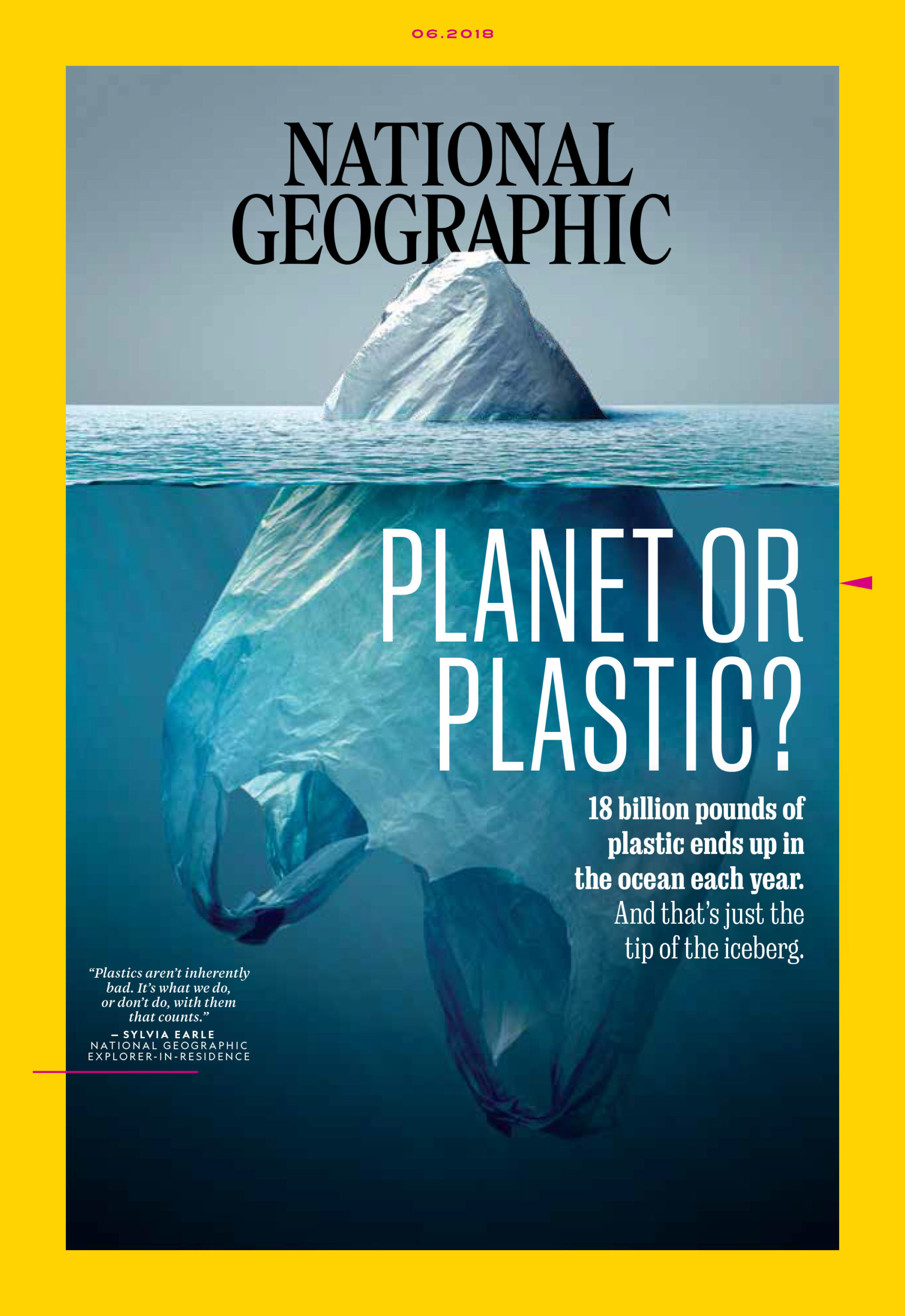 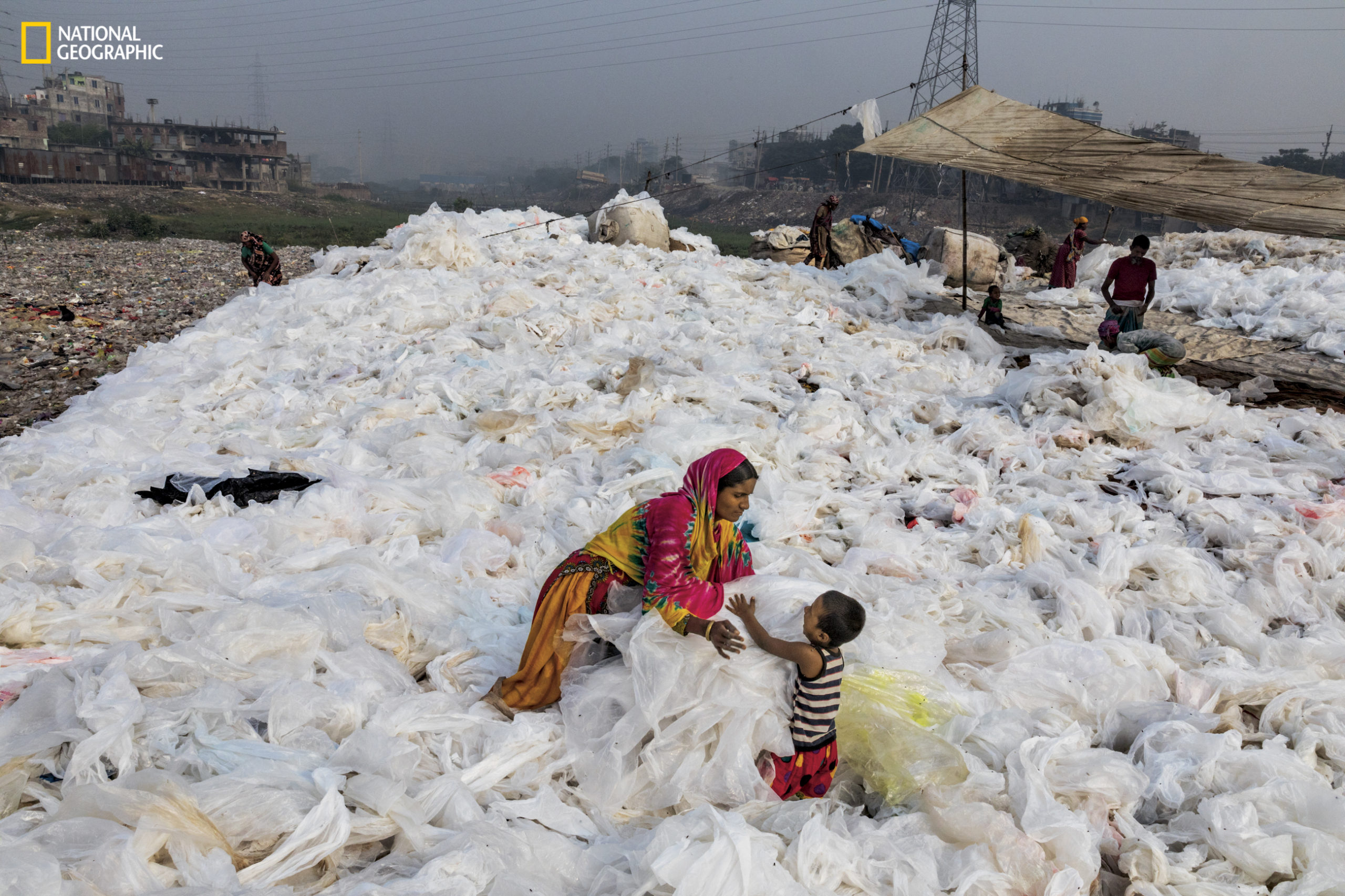 After sheets of clear plastic trash have been washed in the Buriganga River, in Dhaka, Bangladesh, a woman spreads them out to dry, turning them regularly—while also tending to her son. The plastic will eventually be sold to a recycler. Less than a fifth of all plastic gets recycled globally. In the U.S. it’s less than 10 percent.

Heidi: How many countries and photographers were involved?
Vaughn: Our feature spans 52 pages and highlights photography from fourteen different photographers. The majority of the feature was photographed by long-time contributor Randy Olson, who shot nearly 50,000 photos across seven countries.

What was the time frame for this assignment as it involved so much travel for the photo team?
Vaughn: We’ve been discussing the idea of a large feature focused on plastic around the world for years, but it really started coming together in spring 2017. Randy and I began a period of immense research in early summer, looking for locations where we could show the grand scale of plastic pollution. Shooting took place throughout the fall and winter, with Randy carrying a grueling travel itinerary between multiple countries until late January. In early February, Randy returned to NG headquarters in Washington DC, where we spent several days together editing his entire take, presenting his coverage to the magazine staff and beginning work on the print and digital layouts.

How has your daily use of plastic changed after this project?
Vaughn:During my research on the story, one expert recommended practicing what I came to understand as ‘plastic mindfulness’ – being hyper-aware of how the material has permeated every aspect of our individual lives. One morning, I began to count the number of plastic objects I interacted with, from the moment I woke up to when I walked out the front door. I touched 73 plastic objects in about an hour: everything from the buttons on my shirt to the orange juice container in my refrigerator, the shower curtain and the toilet seat to the snaps on my backpack and my phone charger.

Once you become aware of the scale of plastic waste around the world, it’s hard not to think about the impact of your own consumer choices. It isn’t a matter of cutting plastic out of your life completely as much as reducing extraneous plastic day-to-day. When ordering a soda at a restaurant, ask the server to not bring a straw. When buying just a few items at the supermarket, refuse the plastic bag. So much of our consumer plastic waste is born out of small, mindless convenience.

Working on this project also made me more aware of larger lingering questions. If plastic bottle caps will sit for hundreds of years in a landfill, why are we throwing them away after a single use? If certain colored dyes make a plastic less recyclable, why should we dye plastic at all? In what world do we need to wrap a single banana in plastic film? As depressing as the scale of the problem can sometimes be, there’s tons of potential for future change.

National Geographic’s Planet or Plastic? campaign is a multi-year initiative aimed at raising awareness of the global plastic crisis and reducing the amount of single-use plastic that is polluting our world’s oceans.

I know you’ve done extensive work with National Geographic, whats was directive from the magazine for this feature and what did you hope to share with the world as a photographer?
My directives from NG have always been open ended… stories like the Pygmies are losing their forests…OR the Ogallala Aquifer is being depleted. My friends and family accuse me of being Mr. Gloom and Doom for all the facts I have filed away when I tackle a story with difficult issues. A big factor in survival as a National Geographic photographer has always been the ability to research and resolve your own narrative. It’s the only magazine I know that gives photographers that level of freedom.

So, of course, the catchlines we’ve all been seeing this last year like: “There will be more plastic than fish in the ocean by 2050” OR only 9 percent of plastic waste is recycled—these were part of my thinking. But the focus of the first @natgeo Instagram posts is my main narrative: There are millions of slum workers around the world involved in an informal plastic waste industry that is “always hiring.” This third-world “gold rush” to process plastic waste is an economy with no end in sight. One big reason this will continue is the shale oil boom – companies that are in the early years of gearing up “cracker plants” that “crack”  frack-gas-molecules into mostly single-use-plastic for food packaging. Plans are in the works for more cracker plants that will push peak plastic production all the way out to the year 2100. Despite growing concern and much discussion in the media this past year, these corporations plan for more and more single-use-plastic in our lives.

With burgeoning populations and ramped up plastic production, the only way to reduce plastic waste is to consume less. The zero-waste movement is more established in Europe, but there is a USA vanguard. I photographed a zero-waste-blogger who managed to accumulate only one jar of landfill trash over the last two years She adheres to the movement’s mantra: Refuse, Reduce, Re-use, Recycle, Rot (Compost). In her world recycling is a last ditch alternative to Refuse, Reduce and Re-use.

Are you editing as you shoot each location? The images have a haunting beauty to them, were they difficult for you to to review due the large human imprint we have on the planet.
Yes, I edit as I go along because ultimately I am story boarding a small movie (the movie never is shot but the still pictures need to relate to each other and move the narrative along). So as I shoot and edit day by day I’m looking for bullet points that are missing from the narrative. When I returned from the field, my editor, Vaughn Wallace reviewed the entire take to weigh in on the strength of the images, and we worked together to select photos that build continuity to the story.

Did you have any challenges photographing your subjects in the more rural areas?
I was mostly in the slums and dumpsites of megacities but everyone couldn’t be friendlier. The only bad street vibe I got was in Freeport TX where I photographed aerials of a cracker plant built in a precarious site at sea level. My heart went out to a plastic worker in Manila who wasgreeting mourners at a funeral on the street. His wife (also a plastic picker) was in a shrink wrapped plastic coffin that sat on a street in the middle of the city’s informal plastic waste industry. And photographing artisanal trash picking at dump sites is very dangerous. Many workers have died as they try to pick scraps of plastic while standing on top of a load as it shifted by a huge track hoe. Walls of trash can collapse and bury people, and I needed to be right next to pickers when they are working.

You’ve been documenting stories for National Geographic for sometime and have founded the The Photo Society, what made this assignment stand out for you?
I am amazed by the magnitude of plastic. It was difficult thing to show size and scale and amounts of trash. I wanted to photograph people in relation to the plastic In hopes that it would not add to compassion fatigue about global problems.

How was your daily use of plastic changed after this project?
We live in a world of too many people with too many needs so many of my stories revolve around how resource extraction screws the little guy or the environment. So the idea of getting rid of plastic waste is fraught with problems. What helped me understand how to do this in my life is the zero waste movement in Europe. This charge is being led primarily by young women who are tired of the abuses of consumerism. They educate anyone who is interested in a very kind way, that, for example, adopting a zero waste lifestyle can save you money, time and reduce the plastic waste in the world. So I bought a tin for toothpaste because tooth paste tubes (like potato chip bags) have so many layers of materials they can never be recycled. We recycle and compost for the last 20 years, but we always wondered if it mattered. I realized I needed to do more. My wife bought beeswax resin cotton cloths that we are using instead of plastic wrap for food storage. I bought a stainless container to take to restaurants for carry out. I bought a really cool red double walled titanium coffee container to take to coffee shops. These items in anyone’s personal life means they aren’t buying one-use-plastic that becomes trash in a matter of minutes. The one hard part of recycling is knowing only 9 percent is ever turned into plastic objects…and now there is more pressure and fewer options since China stopped taking a lot of our plastic waste.