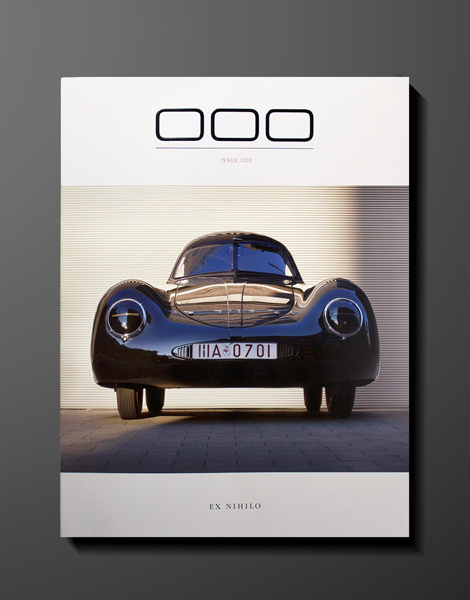 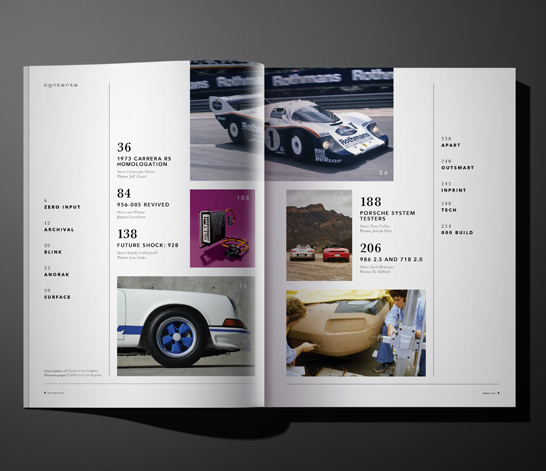 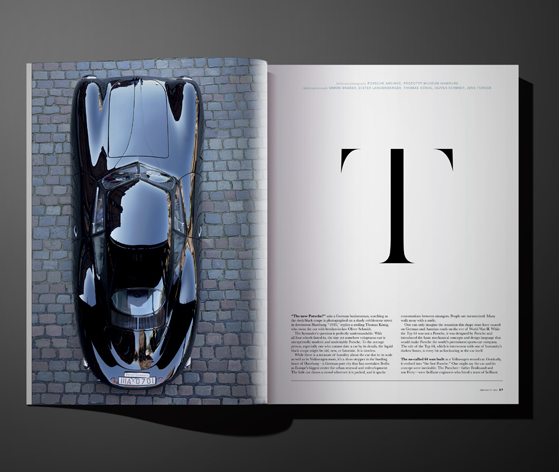 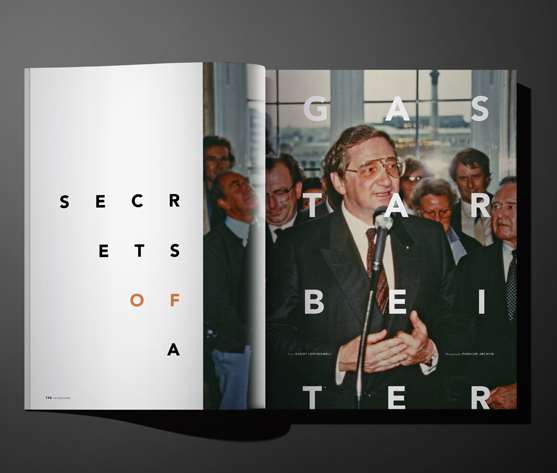 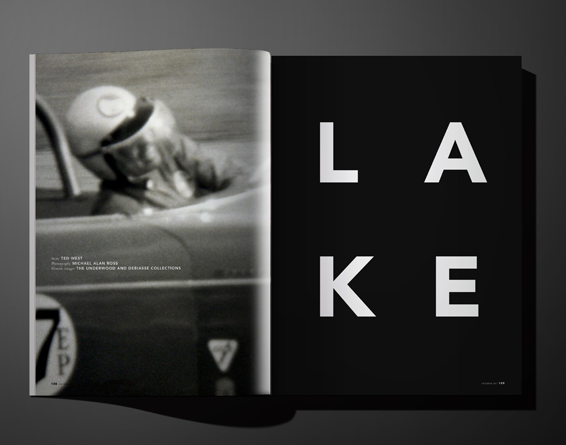 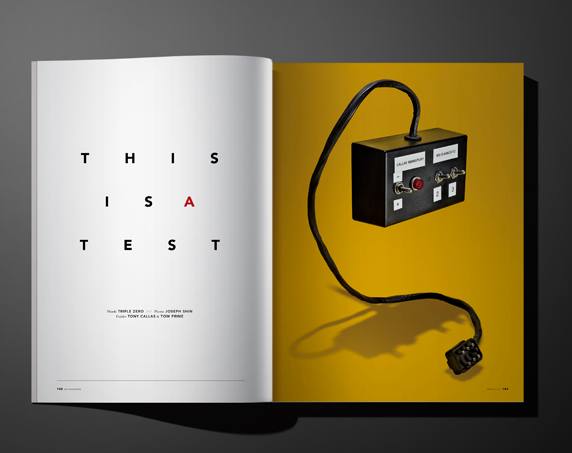 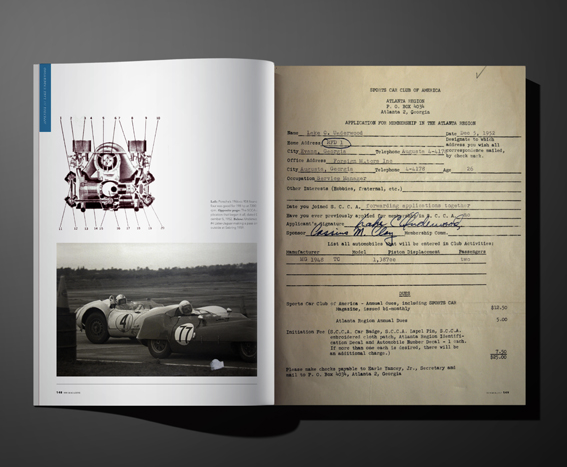 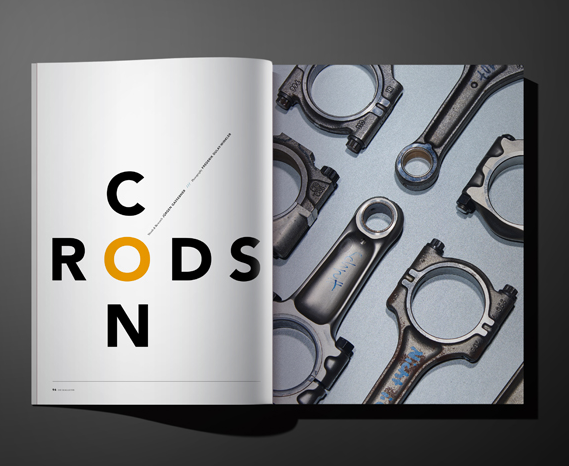 Heidi: How did this project come about for you?
Justin: I got a message one day from my childhood best friend whom I hadn’t seen or spoken to in decades. He and his long time associates in the auto magazine game were going to start their own magazine and were looking for an art director. They actually already had someone, but felt like they wanted to look around for just one more option before committing. While they were picking their brains on who that last option might be, Pete (the editor, owner and my long-lost childhood BFF) recalled that a mutual friend of ours, whom I had recently caught up with at a our high school reunion, had told him that she had seen me, and that I was also in the magazine game. In fact, I was an art director at Playboy (at the time). Pete looked me up and hesitantly clicked on my portfolio. That’s when I heard from my long-lost buddy. We spoke about the project, did a lot of catching up, (this went on for months). They had me do a few spec designs based on what they were looking for so they could measure my work up against the person they were already almost working with. We did a couple back and fourths on the fundamentals of the book, mocked up some story designs and they decided to bring me on. Shortly thereafter, Pete and I were working together in his office in Marin developing page templates, type styles and a production plan to launch 000.

How much is assigned and how much is sourced?
It’s a combo. Our goal is to show people images they’ve never seen, so we want to assign as much original art as possible. but we’re also very deep into historical documentation and vintage images that we’re able to source from various collectors and archives. The feel of the book is very much a blend of original and historical. We have a section that is comprised of photographed factory documents, translated from German to English in captions. I love the archival materials, the discoloring of the documents and tones in the old b&w prints look beautiful when you get the combinations right on the page

Since you are a quarterly, are you shooting all your covers? and have they all been shot in one location?
The covers have all been shot on separate locations from Germany to Palm Springs.

Where are you sourcing the vintage images from?
The vintage images come from various collectors and archives. The Porsche factory archive has been incredibly helpful, as they have a number of private collectors, in allowing us to source their personal pieces.

Tell us about the logo design?
The logo design is based on the letterforms of an early iteration of the Porsche insignia: rounded, modern, geometrical. Since the name itself (000) is based on Porsche’s developmental numerology, my guys felt that the Porsche early font style was the right basis for the design. They had done a few font studies, but weren’t quite sure where to take it from there. It seemed to me that they already had the pieces but just needed them dialed in. So I picked it up, went through a few exploratory options trying different flourishes, geometry, color devices and those sorts of things (because that’s what you do) but we ended up going with the single color, underlined trio of rectangular zeros.

How many Porsches have you driven and in one word describe the experience?
I’ve driven 5 or 6 since we started this journey – some on track, some on the back roads of Austin,Texas. My most exciting ride though was as a passenger at the thermal raceway in Palm desert. We work with one of Porsches factory race drivers and he took me out for some hot laps. I think we did about 6 laps at break neck speeds. Every time I looked over, my man was a cool as a cucumber. So what’s the single word that means “it turns out my personal car isn’t that fun after all”?

Are you doing any illustration for the magazine?
I’m not personally doing any illustration for 000. We do work with an illustrator on our build section. In each issue, my editors work up a sort of dream car configuration and have it visualized by an automotive designer. We’ve talked about how to utilize original illustration more, but given the nature of our book, I don’t see too many opportunities. What our readers are really here to see are beautiful photos of cars and genuine artifacts that they haven’t seen anywhere else.