I never get homesick.

Not for New Jersey.
(Where I’m from.)

But lately, my home state has crept back into the dark recesses of my consciousness. It began recently enough, when I found myself reading Benjamin Franklin’s autobiography.

My son, Theo, was writing his first term paper, and chose Franklin as his subject. I saw the book sitting there, and picked it up out of curiosity, more than anything else. When I read that old Ben first landed in New Jersey at Amboy, not 10 miles from where I grew up, it definitely piqued my curiosity.

The book was a bit of a tease, if I’m being honest, because as fascinating as it was to be inside Franklin’s mind, he died writing it, before he got anywhere near the Revolutionary War.

The man spent pages and pages describing a system for removing dust from the streets of Philadelphia, but never thought to speed it up so we could hear what he thought of George Washington, or the Revolution in general?

Mind-melding with Ben Franklin, straight out of the 18th-century, reminded me of the feeling I had walking the Monmouth Battlefield, or going on school field trips when I was young, and being told that Washington had slept there.

At the moment, I’m deep into binge watching an AMC show about the Revolutionary War, with the awkward title of “Turn: Washington’s Spies.” (Seriously, for all the money these people make, nobody thought to come up with a better title?)

The show is exceptional, so you certainly have my recommendation to watch it yourself, but it’s also been feeding the odd homesickness as well. (As an aside, the show gives good evidence that the New Jersey/Long Island Island rivalry goes back to the old days, when Jersey was Patriot territory, and Long Island was a Tory stronghold.)

My hometown, Holmdel, had its fair share of 18th-century architecture. Not to mention graveyards. (Can you imagine how scary it would be to live next to some of these places?)

Right now, I definitely feel some chills up my spine, having just put down “The Story Series,” a new book by Carolyn Marks Blackwood, recently published by the Roberto Polo Gallery in Brussels. (She just had a show there, and it’s now up at Von Lintel in LA.)

When Ms. Blackwood originally wrote me, she mentioned that she lives in upstate New York. In a sense, it doesn’t matter, because the pictures in this book channel that 18th-century creepy vibe better than just about anything I’ve seen.

The book mentions that these pictures are meant to be exhibited at a very large scale, so when I was looking, I tried to imagine projecting them as wall size, which helps explain the sort-of-painterly, soft focus, lower-resolution aesthetic presented within.

According to an opening interview, Ms. Blackwood is also a screenwriter. It makes perfect sense, as each of the snowy, or dark, wintry pictures is accompanied by a one or two sentence narrative.

I think there’s a range in quality between the pictures, and some would be banal, without the text. Regardless, when combined, I think they give off a strong, local, historical mood.

The paper is dark. The pictures are dark. They’re like ghost stories, without the ghosts.

My one quibble here, and it’s something I’ve mentioned a bit lately, is that I think there are too many pictures. I know that books differentiate themselves from catalogs by being bigger, and having more images, but I definitely think that more is not more, in most cases.

See you next week 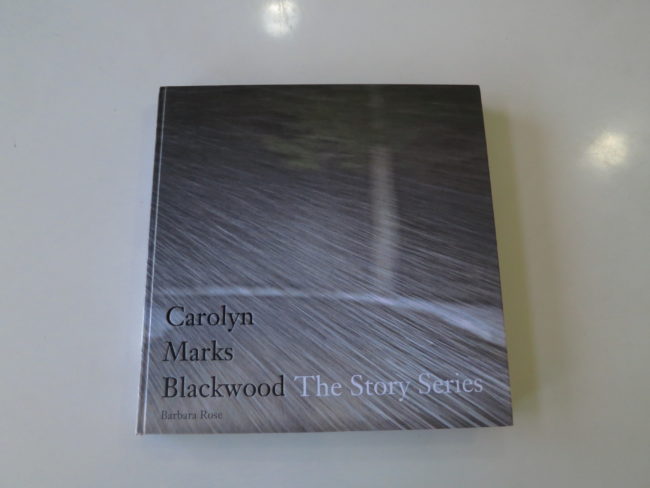 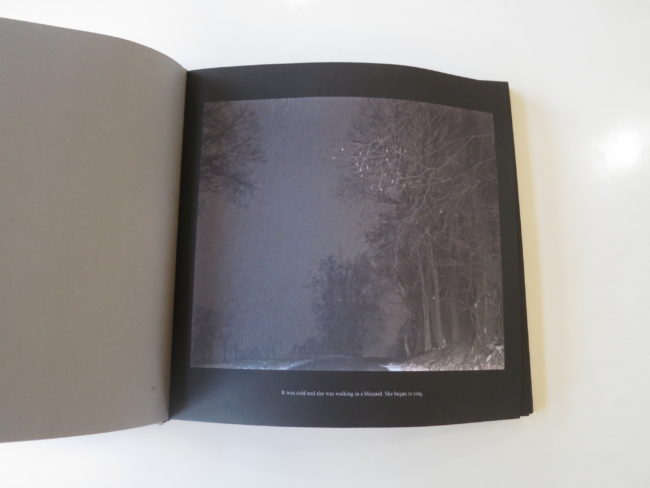 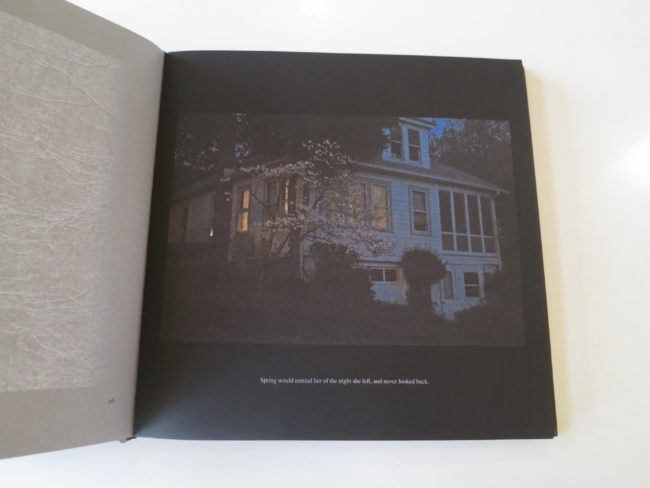 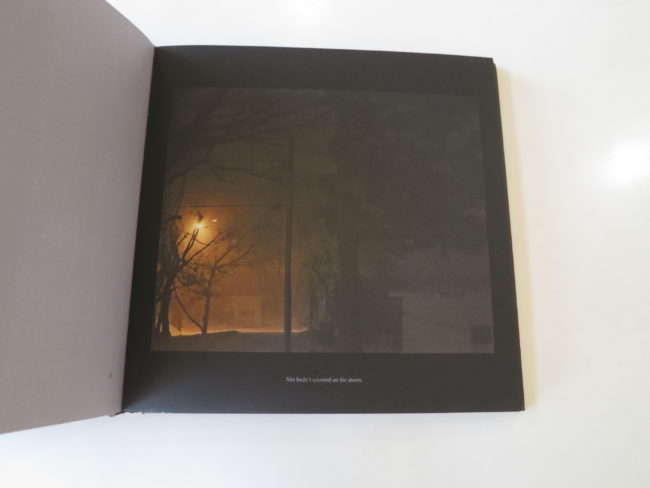 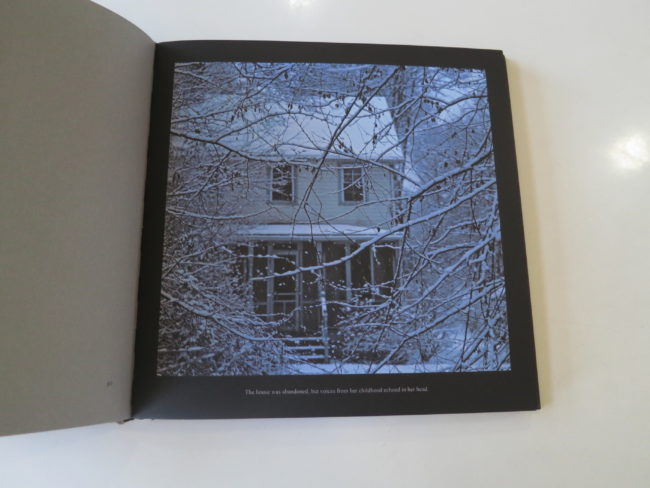 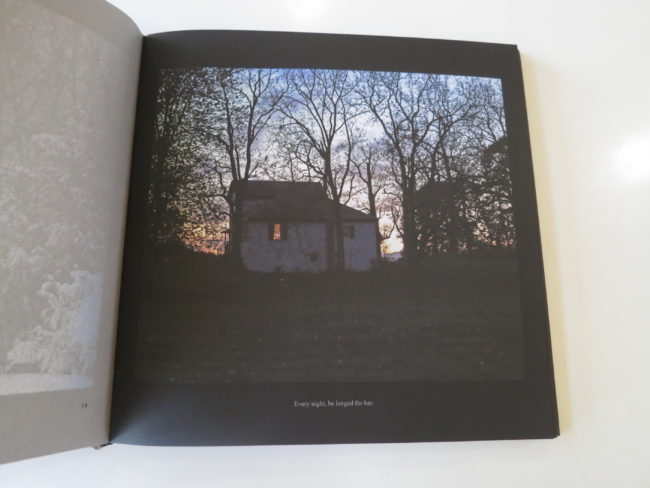 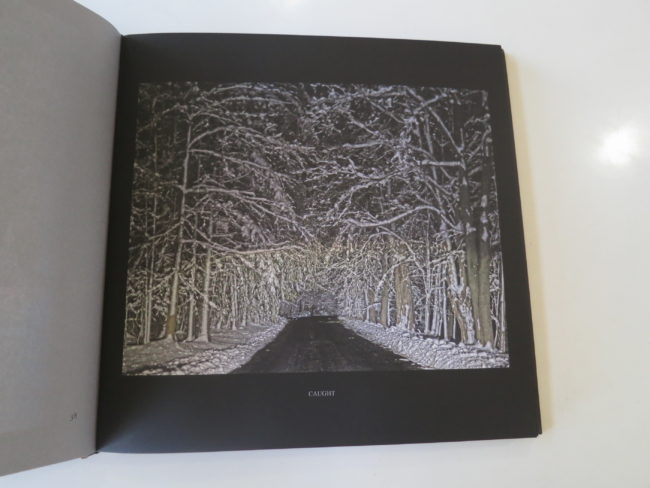 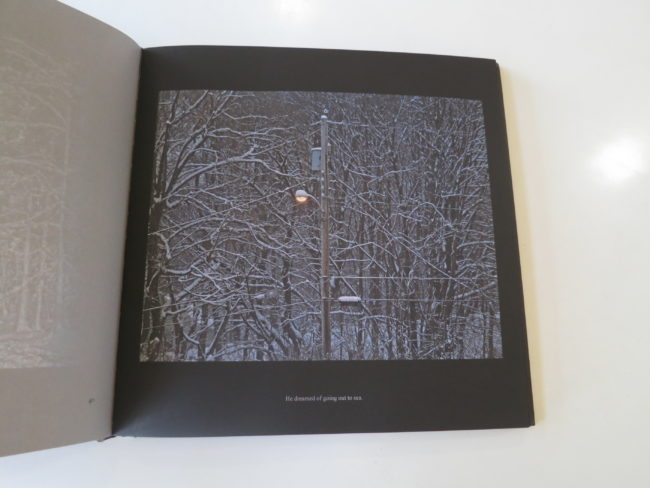 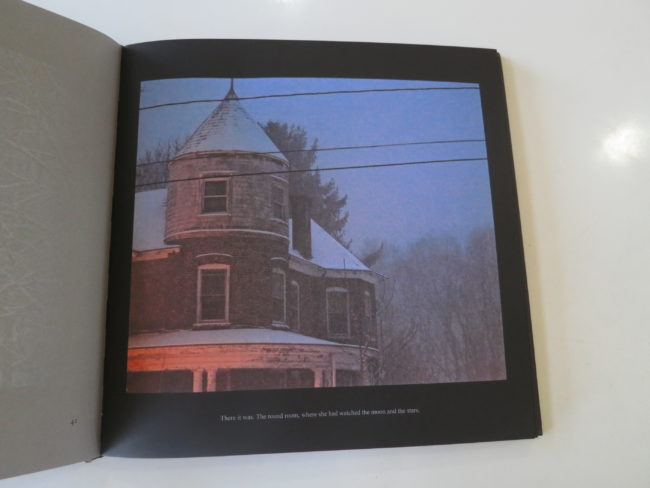 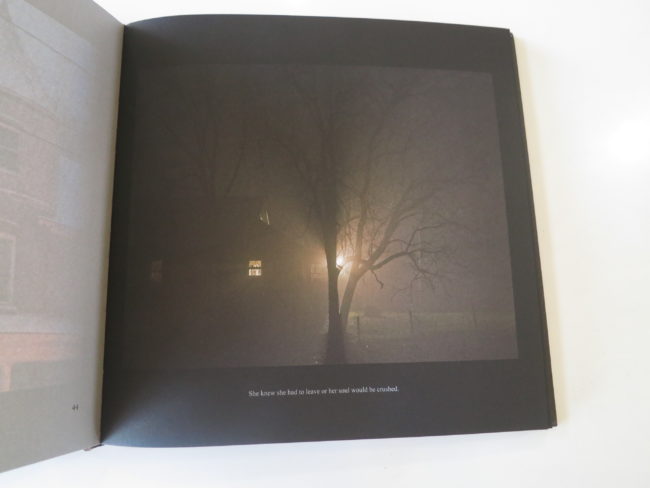 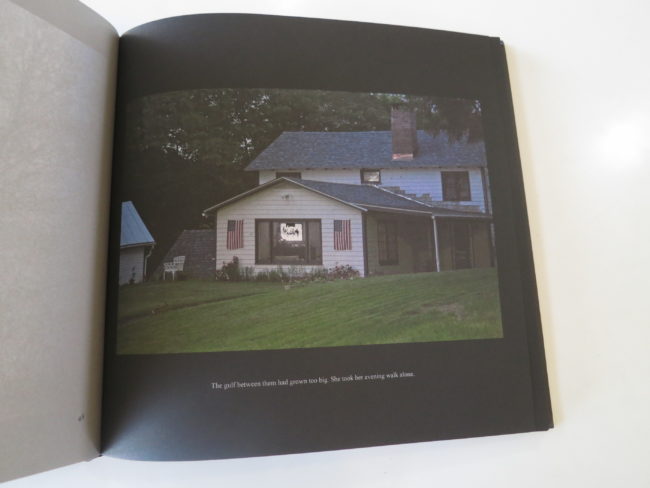 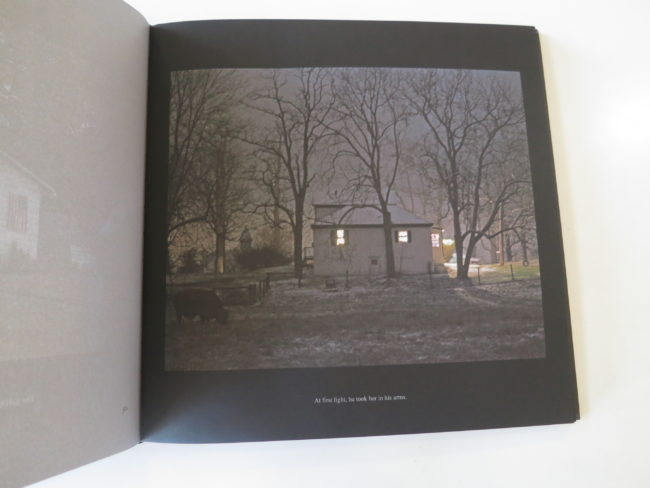 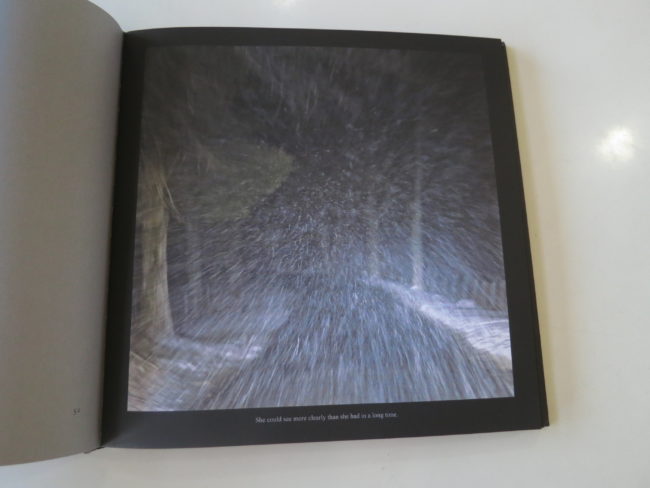 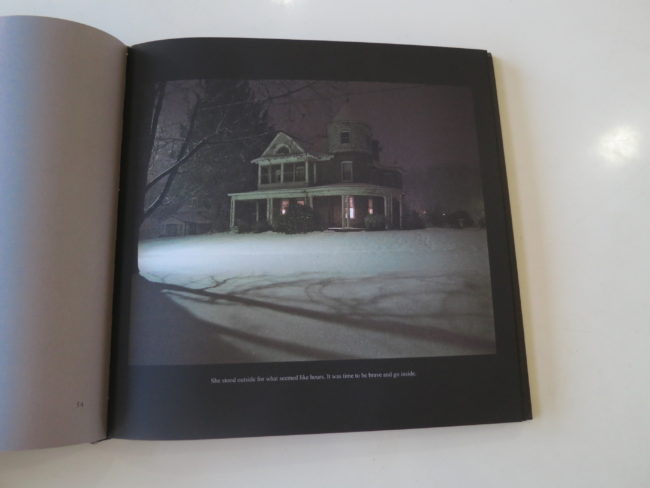 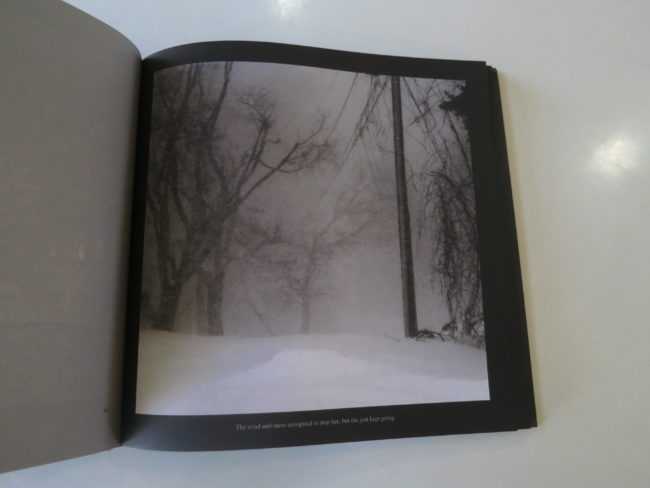 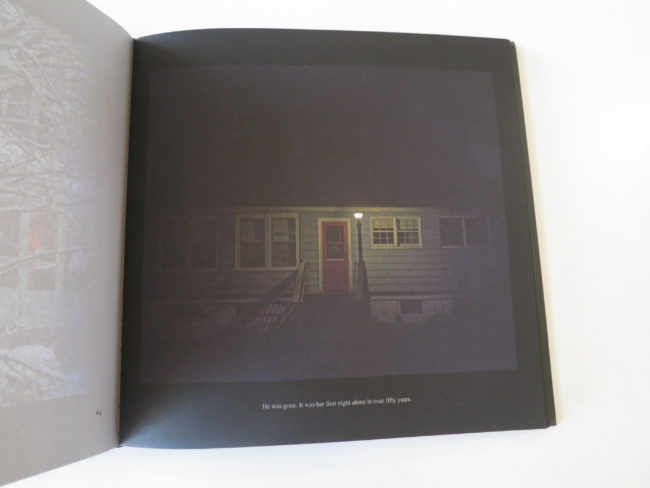 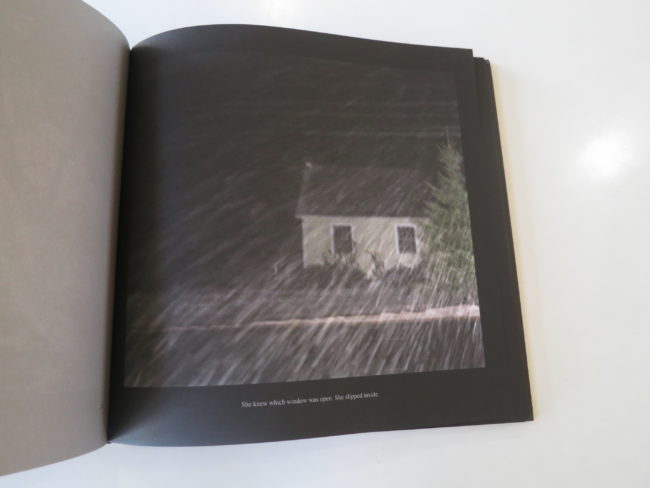 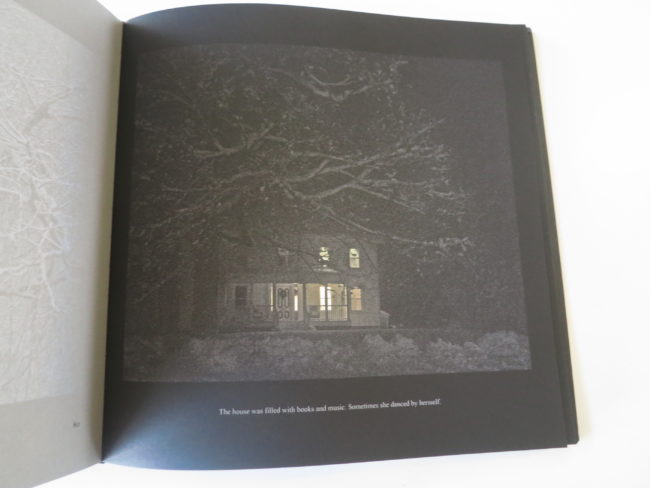 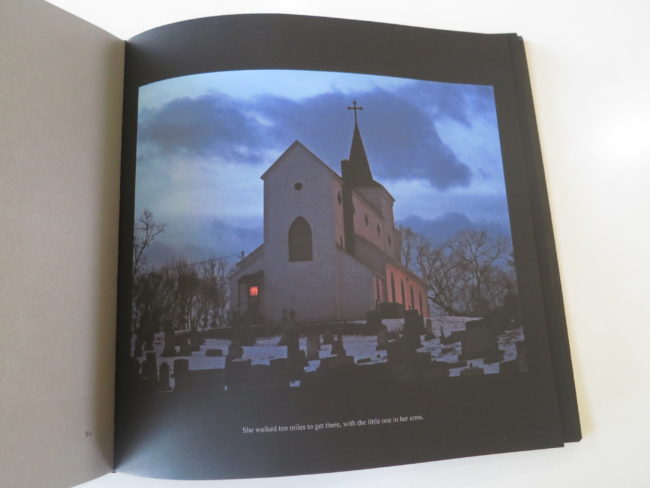 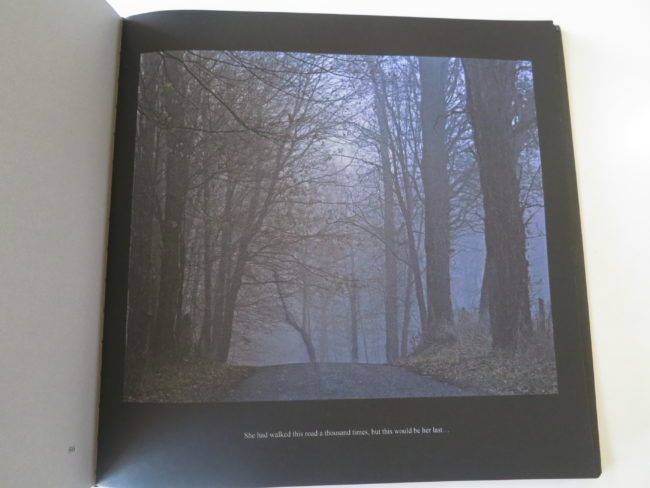 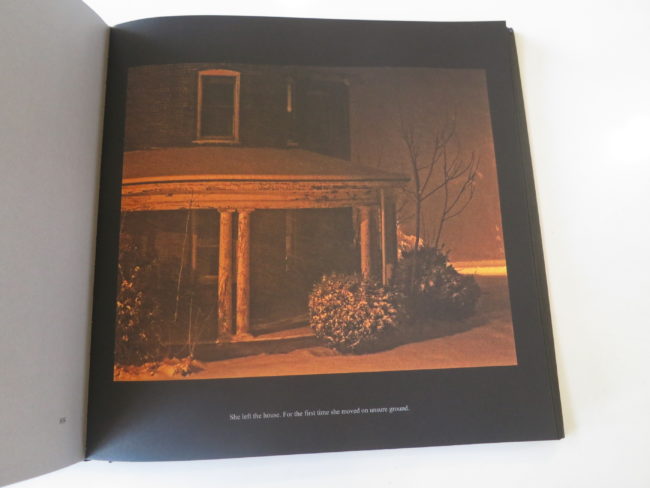 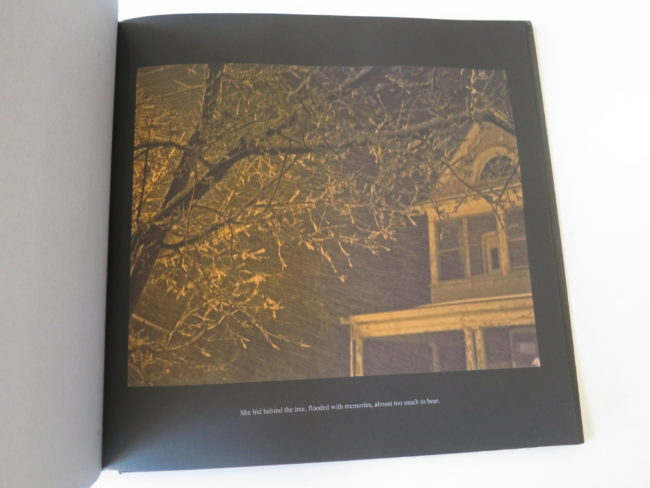 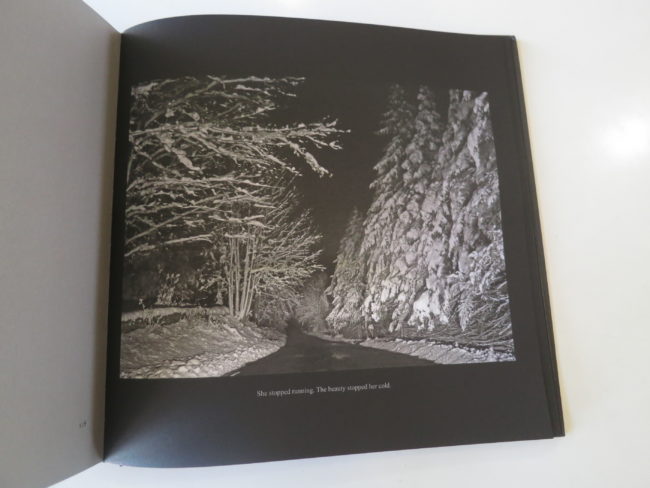 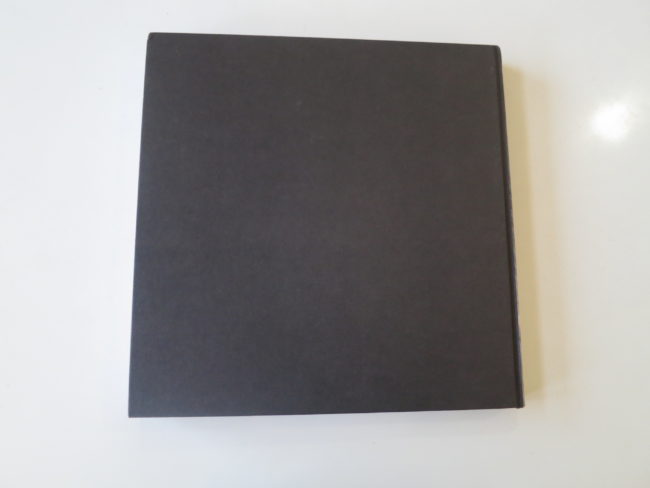