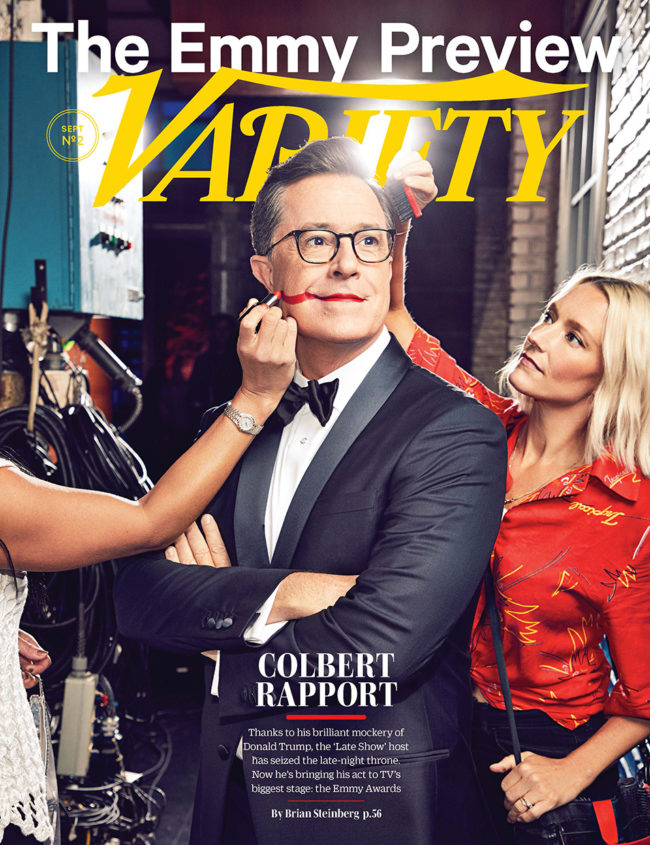 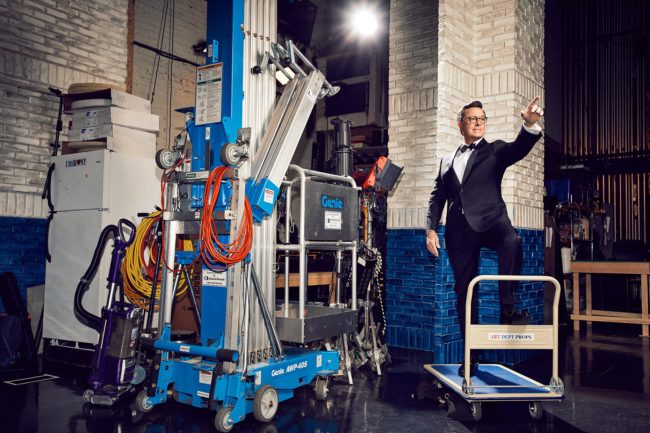 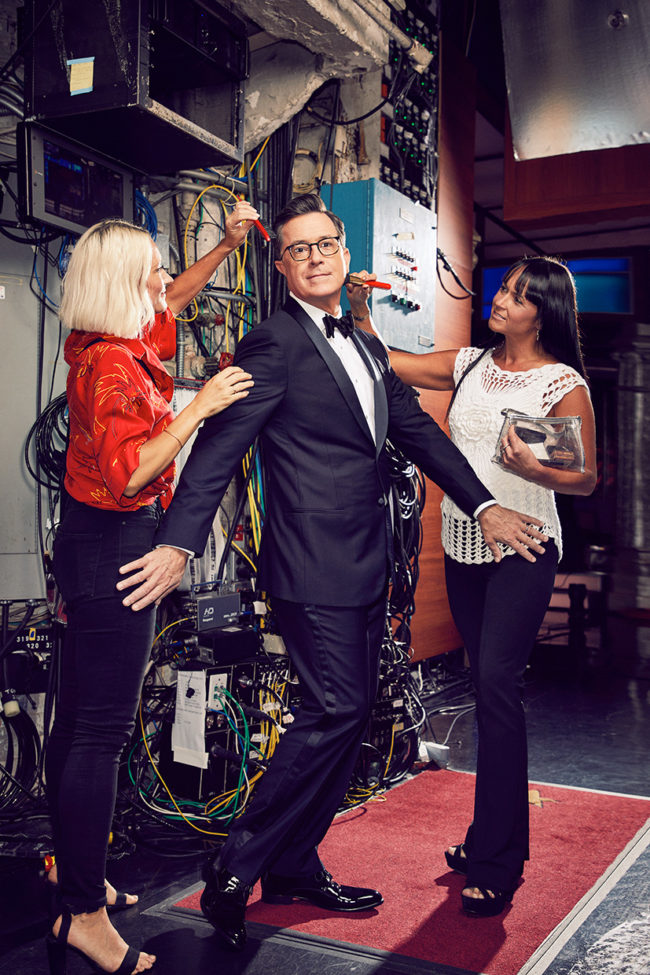 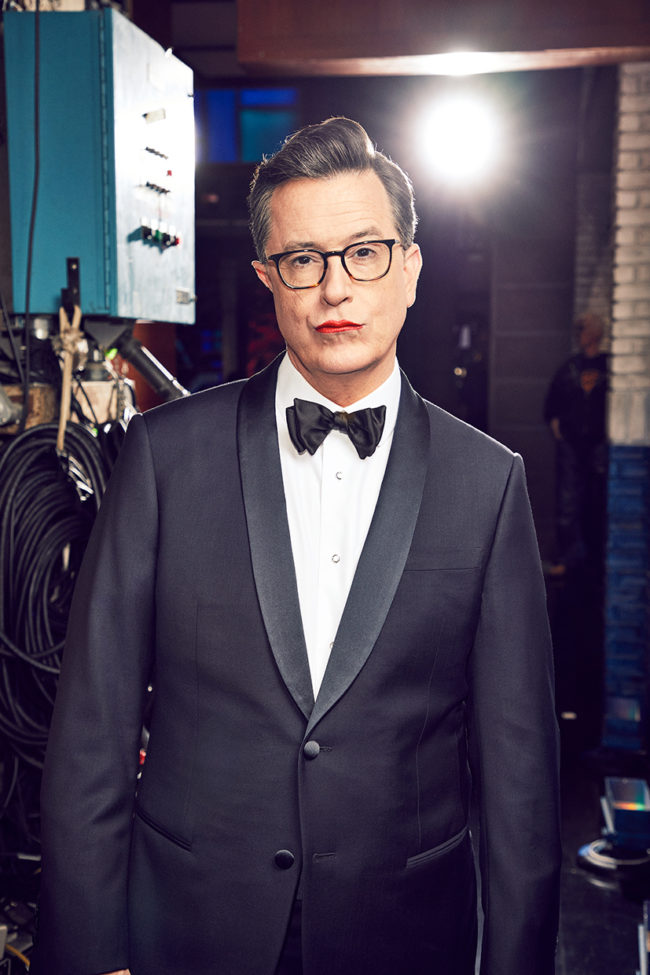 Heidi: Can you talk us through your process preparing for a celebrity shoot like this?
Andrew: After the initial email from Variety PD Bailey Franklin confirming subject, date and location I checked in with him to see if they had any specific creative direction in mind so I could start wrapping my head around what I needed to do to get the ball rolling my end. If I recall we only had 5 days to pull it together, two of them being the weekend so things needed to happen swiftly. Variety were looking at a cover, a TOC image, an opener for the feature and 1 or 2 more images for secondary art. It was for their Emmy issue and Colbert was hosting the show so I started to brainstorm ideas and put together a creative deck. The location was The Ed Sullivan Theatre in NYC where The Late Show is taped. I wanted to give the impression that we were at the Emmys itself so didn’t want to shoot on the set per se so began thinking of ideas for front and back stage and researched images of previous Emmys awards shows to see if there was anything that caught my eye and would help shape some fun concepts. Also had a creative call with Bailey and CD Chris Mihal to flush out ideas before we sent the deck to Colbert’s PR for concept approvals. I knew Stephen should be wearing a tux too for it all to make sense and we made that request from the git go.

It’s a challenge to come up with original ideas for Colbert as he has been photographed pretty much every which way at this stage. But having a theme like the Emmys helped focus the concepting for me. I also asked and got to scout the location two days before the shoot which was great as we were able to walk through creative, technical and logistic scenarios with Colbert’s people and the crew at the studio; which can be a bit of a minefield in itself making sure you adhere to the house rules. On this shoot I used battery-powered strobes so we didn’t have to have a union electrician on hand to plug everything in. Usually helps gain some good will with the studio manager.

What tools to do you have to deal with the time pressure?
It’s all in the preparation. I like to have as much time to set up as possible and in this case we had two hours (which always goes so much quicker then you think). Each member of my crew was clearly aware of what our work flow was and what their responsibilities were. We discuss all possible scenarios that might play out creatively and technically. It’s important for everyone on my team to be in a cool calm zone during the shoot itself and we discuss who will do what should there be any hiccups so the experience is as seamless as can be.

What gets eliminated due to time constraints?
We were scheduled to have an hour to shoot with Stephen but in the end we had 20 minutes. I had 3 different set ups dialed in and in this case we stuck to that plan so nothing was eliminated.

Was this before the taping of a show?
Yes the scheduling was pretty tight. Shoot time was 12 noon – 1pm, when the studio crew were at lunch. We had a hard stop at 1pm as the band Beirut began a sound check and camera rehearsal on the set for their performance that evening. Let me say that the band did start playing at 1pm on the dot.

Did you shoot more than two locations?
We did the first set up in front of house which one assistant wrapped as we went back stage for the other two set ups. We needed to have all our gear out-of-the-way for the Beirut sound check.

Was it a collaborative effort with Colbert or did he simply want to be directed.
I had actually photographed Stephen at the Sundance Film Festival way back in 2005 when he was there promoting the Strangers with Candy movie. It was part of a portfolio I was shooting of festival attendees for Premiere magazine. I still remember the session with Colbert fondly because he and co-stars Amy Sedaris and Paul Dinello brought so much energy, dynamism and authenticity to the set. This was right before the Colbert Report started on Comedy Central and he was relatively unknown still. I had no idea who he was at the time. I mentioned this to Stephen right before the shoot.

A subject like Colbert is a photographers dream. He’s a total pro and brings so much energy and enthusiasm. He’s also incredibly gifted physically and has an amazing sense of himself and the camera. I would say it was very collaborative with a bit of direction and a tweak here and there from me. Everyone was on board with concepts and how to execute at this stage so it allowed for spontaneity and ad libbing for each scenario.

The cover shot with his glam squad (hair/make-up/stylist) was my idea. The lip stick was all Stephen and we were given the heads up that it was something he wanted to try before the shoot. We did this shot last as we knew his make up would be toast once the lip stick was applied and we didn’t have time to be re applying for another set up.

What’s the best part about shoots like this? (where time is restricted)
The great thing in this instance was that 20 minutes was more than enough to get what we did. No time to over think each scenario, no time for the subject to become bored and uninterested. Helps of course that Colbert is a total pro!!!

What’s the most useful advice you would give your creative younger self about situations like this?
Friend, inspirator and mentor Platon once gave my younger creative self some advice that still holds true on shoots like these “Be yourself. But be prepared. Be prepared. Be prepared. Be technically prepared. Make sure nothing will go wrong technically and if it does, make sure you have a backup to the backup to the backup.  So be prepared, be yourself and most importantly you must make an Andrew Hetherington photograph. Oh and enjoy the moment.”