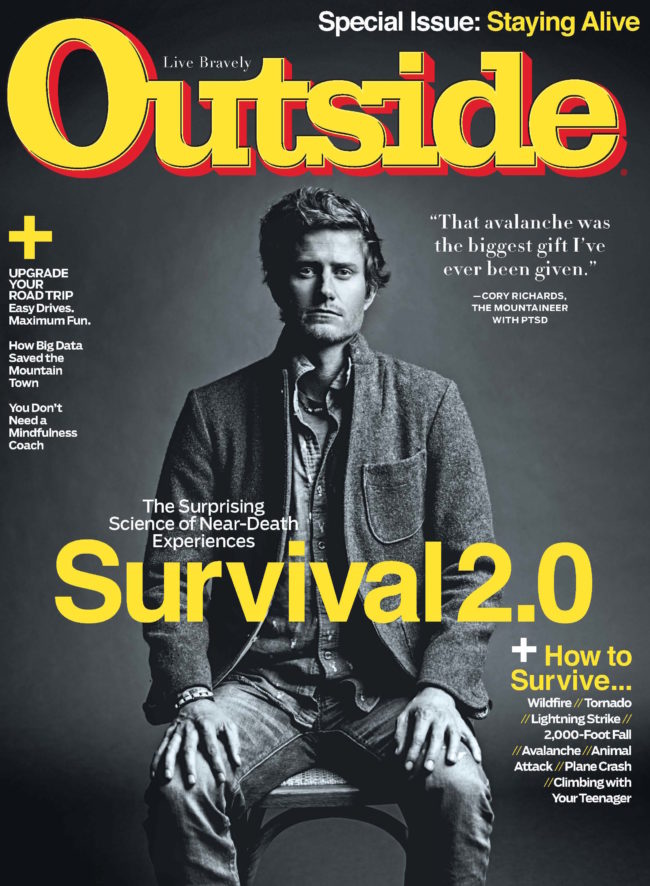 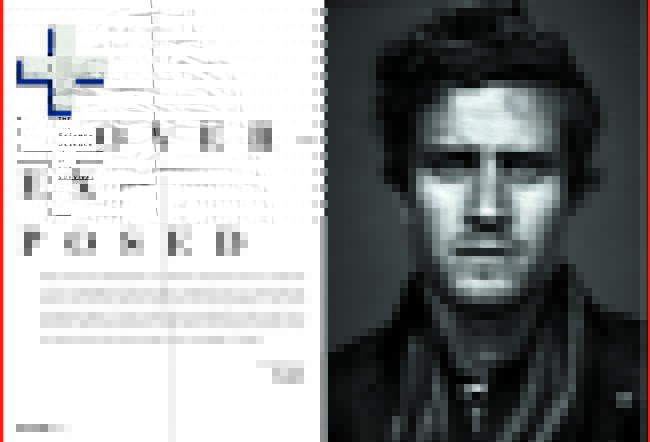 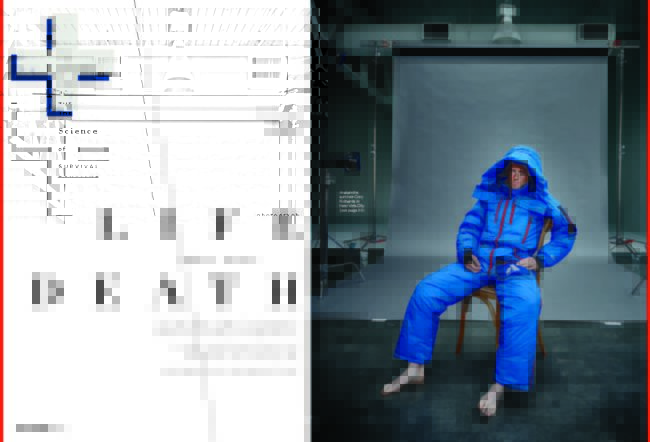 Heidi: How many set ups did you do and what type of direction did you give for this image for Cory in the snowsuit?
Nigel: We got to maybe five or did six different setups, things were going well. Then we we’re coming to the last set and I said, “This is where I want you to put your big snow suit on as if you’ve traveled, you’ve done your climb and you are finally at rest. It’s obviously in a studio, but just try and make yourself feel like the avalanche has just happened.”

“Cool, that’s good.” he said, “I just need to go over and pick up this message,” and he just sat at the dressing table for maybe 10-15 minutes.
I said, “Okay, when you’re ready,” and he then walked back over to the set and we started shooting again.

After I stopped shooting I went and gave him a big hug and assumed what just happened was he’d taken himself back into that terrible state where he had almost died and he was reliving the emotions. He said,” You know when I went over there and picked and picked up that message? I was told that my best friend just committed suicide.”

He said, “No, it was my decision to keep going on. It seemed fitting anyway, I knew I was going to be quite upset.”

Do you find that a little challenging to shoot a peer?
Cory is an adventure photographer and takes incredible photographs in situations where I wouldn’t even in my wildest dreams think to find myself. He takes very different pictures. To me, photography is so compartmentalized; we’re just in two totally different spheres.

What type of direction did you get from Hannah?
The direction I got from her was simple. She told me he’d almost died and she wanted something similar to the photos you see of people before they climbed Everest; with a nod towards early 20th century images where they’re very slow shutter speeds so everyone had to sit very still and stare at the camera. I thought this was perfect direction since he’s a mountaineer, there’s no smiling, no movement. The fact that I was shooting a lot of black and white made it easier and more powerful.

Had you met Cory before?
No, though he seemed like a sincere bloke. I don’t know what he was like before the accident, and maybe that’s changed him. But I found him a terrifically interesting in every way. You want to get to know him more. I think he’s very visually appealing and we have been doing some corresponding actually because he’s doing a bit of portrait work, and I’ve been mentoring him a little with of all of that.

Is there something creatively that you learned about yourself or did anything shift for you as a photographer after the shoot?
Every now and again you have what is an abundance of creativity and you can work with that if you want. It’s really an abundance of Limbic resonance. That’s what photographers want in their arsenal. Because that’s just, there are areas of your brain which basically feels emotions and is able to empathize with another person. If you’re able to do that, That’s your major tool, once you’ve got all your lighting source figured out. As a portrait of photographer you want to be able to get so close to the person, not necessarily as in proximity, but just be close to them emotionally and on their wave length that you and they become joined mentally, emotionally. That’s what one always strives for. I don’t know how one gets it. I just know that this is my goal in portrait photography. I’m so desperate [laughs] to people — because it makes people open up. Our shoot was great in that respect. If somebody is very receptive to that, then it makes for a wonderful connected shoot where the person who’s being photographed knows just about when I’m going to shoot the photograph, and I know what they’re going to do next. You become sort of connected.

You do have a nice connection then since you’re mentoring him.
Well, I do now, but the first time I met him was when he walked in and said, “Oh my God, I can’t believe that I’m meeting you and you’re going to photograph me.” I said, “What? What are you talking about mate?” [laughs].Yes. That’s very lovely of him to say that. He said, “You’re also my hero.” “Oh, well that’s fantastic. I’m sure by the end of this you’ll be my hero because I’ve never climbed a mountain that spared my life.” I replied.

Do you have any photographic influences?
Yes. I’ve had many. Not many of them are living right now. I’ve tried to emulate or pay homage to David Bailey. I use David Bailey as the person I would love to learn from, I was totally taken by his pictures. His directness and his cruelty in some respects. It’s a sort of cruelty you don’t get from Irving Penn who I also love. Also for the decisive moment, the good old favorite Cartier-Bresson because I started out as a reportage photographer. Cartier-Bresson was my idol and hero, alongside David Bailey as well. I find that there’s an awful lot of similarity between portraiture and Cartier-Bresson’s work. In fact, there’s an awful lot of similarity between portraiture and virtually any other kind of work. Once you’ve mastered portraiture, you can pretty much jump off to anything. The key to portraiture is to have an environment in which, be it lighting, or whatever it is in that environment that you’re photographing, the moment comes to make the magic happen.The only difference between say, portraiture, and reportage is that reportage people have to get themselves in the middle of the crowd. Whereas I have to get my studio set so that when the magic happens, I can get it. There’s very little difference in the actual execution, the principles of execution they are very, very similar.

Do you remember some of your first images when you thought, “I love photography and this is what I want to do?
Well, I remember a lot of my first images. The first image that I ever had published was a picture of some little girls walking down some steps inside the British museum in London. I realized that even though it was only sold as a postcard, that must be a great way of making some money out of something which I enjoy so much. It was the fact that I was willing to put money behind this to make a wet plate of it than print it on paper, buy the paper, buy the ink and distribute it. There must be something good about it.

What would you tell your younger self, now that you have so much experience as a photographer?
I’d tell myself not to become a photographer, be a lawyer or a doctor or do something that can’t be replaced by a phone and a bunch of algorithms–but no, I wouldn’t change a thing about my chosen career. It has been the most wonderful, the most interesting, the most challenging, the most frightening. The road with the most twisted bends, and turns and highways and freeways. I wouldn’t change a thing. It has, and hopefully will still be wonderful.