Licensing: Unlimited use of up to two images for two years

Location: On location in Denver

Photographer: Portrait specialist based in the Southeast 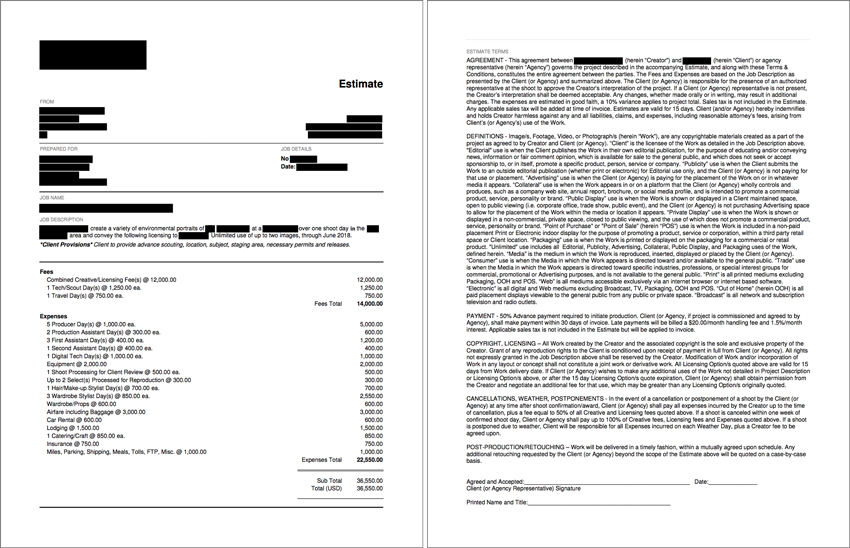 Creative/Licensing: Earlier this year I helped to estimate a campaign for a large hotel group for one of our Southeast-based photographers. The concept was to highlight the client’s business services and corporate rewards programs by shooting an environmental portrait of an executive from another well-known brand that utilized the programs. The client secured the subject, and the subject secured the location (one of their very recognizable retail-storefronts). The client hoped to walk away with two portraits of the subject captured in slightly different setups within the location. One shot was an eyes-to-camera “hero” shot. The other was a secondary, more candid-feeling portrait (think captured moment while the subject assesses inventory or interacts with store staff).

Although the client required unlimited use of the two final selects, there was an inherent “trade advertising” limitation in the use. While I was mindful of the possibility that the ad could potentially be used in consumer-facing publications/platforms, the campaign was directed toward corporate travel departments & executives and, accordingly, would most likely be placed in trade publications. Though the intent was made clear, the client wasn’t willing to limit the licensing agreement to trade use only.

Additionally, the client requested two years of use for the images. Lately, I’ve tried to avoid anchoring licensing duration with the term “from first use” because it can be a bit too vague. It puts the onus on the photographer to chase down the client to determine when exactly the first insertion occurred (though some clients are good about sharing that info, others are trickier to pin down). Additionally, without more specific language, some clients may take a liberal interpretation of “first use” to mean first use of a given image, as opposed to the image set, effectively extending a given campaign (e.g. image one is used 6/16-6/18 and image two is used 1/17-1/19). To avoid these issues altogether, we’ve been using specific expiration dates, which will often include a bit of lead time for print production and insertion deadlines. So a shoot scheduled in early May, such as this, allowed for as many as six weeks of post and print production work (i.e a start date of June 30, 2016 and expiration date of June 30, 2018). It is possible the client could immediately insert one of the images in a web ad or elsewhere, but when pricing out durations in the 12+ month range, we feel the extent of the usage and clarity of the termination date outweigh the concern over early use.

After factoring in the intended use, duration of use, inherent limitations, the complexity of the shoot, nature of the campaign, variety of the imagery and the scale & reach of the client, we set the value for these images at 8,000 for the first, and 4,000 for the second. The value of the second image drops so significantly because it is a true variation of the first image that doesn’t drastically impact the core message or design on the campaign but still provides value.

Client Provisions: I was sure to note exactly what the client had committed to providing, including sourcing the location and subject, and securing the necessary releases.

Tech/Scout and Travel Days: I included one tech/scout day to walk through the storefront location with the creative team to determine compositions and block out the schedule. It was also particularly important in this case to determine appropriate staging areas, assess the availability of power options, overhead lighting control and store readiness as the product and store would feature prominently in the shots. Based on the flight schedules, we were able to fly in and scout on the same day, enabling us to estimate for one Tech/Scout day (including travel to the location) the day before the shoot and one return travel day the day following the shoot.

Producer and Production Assistant: I included a producer to manage all aspects of the production, from sourcing crew to booking travel to correspondence between the client and subject. I also added a PA to help with odds and ends throughout the production.

Assistants & Techs: I estimated for a first assistant to travel with the photographer and included a digital tech (with a workstation) & second assistant for the shoot day.

Equipment: I estimated one day of gear rental from a local rental house at 2000.00 for a medium format system, backup DSLR system, a handful of lenses, lighting and grip equipment. Our proposed itinerary would allow for our first assistant to pick up gear the afternoon of the tech/scout day and return it on the way to the airport the morning after the shoot.

Shoot Processing for Client Review: This covered the photographer’s time for the initial import, edit, color correction and upload of the entire shoot to an FTP for client review and final image selection.

Selects Processed for Reproduction: I included basic processing of “up to” two final selects as a lump sum (based on 150/image in this case), which protects the fee in the event the client ultimately selects fewer than two images (or more than two images, for that matter).

Travel Expenses: I budgeted for airfare, lodging and car rentals for the traveling crew (Photographer, Producer and First Assistant). I was sure to consider parking, internet, baggage and car insurance costs as well.

Catering, Insurance, Miles, Meals, and Miscellaneous: To wrap everything up, I estimated for craft, breakfast and lunch catering at about 60.00/person, insurance costs to cover worker’s comp premiums (and a small portion of general liability, meals and miscellaneous costs for the traveling crew.

Results/Hindsight: The photographer was awarded the project, without negotiation, which meant we hit the budget on the nose, or that we left money on the table. Wonderful Machine managed the production and the client has since come back to the photographer and WM to produce and shoot additional versions of the same campaign.