About a year ago, (give or take,) I read somewhere they decided the word “internet” should no longer be capitalized.

Now, I’m about the worst person to complain about the misuse of capital letters. I’m terrible at remembering the rules, so years ago, I decided to embrace the digi-world-acceptable practice of manipulating spelling and grammar as I choose.

I’m so bad, I even write entire emails in lower-caps. (Yes, I’m that guy.)

For some reason, though, I decided to abide by the new rules, though I’m not really sure who gets to make these decisions in the first place.

Seriously, who are these people?

And why was the internet no longer the Internet? Could something that powerful, ubiquitous, and just-shy-of-omniscient really have become less important?

Can you believe that someone, somewhere, got paid to make a decision like that? (You know there were committees involved.)

Maybe it was the Public Information Protocol Bureau? Or a cabal of nefarious magazine editors?

We’re ALL on the internet these days. Cell phones are everywhere; mobile carriers of the information network that binds us together.

And while we consider the digital world a different kind of experience, being online can manipulate your emotions, just like IRL. (That seems obvious, as who hasn’t felt anger or jealousy when scrolling through Twitter or Facebook.)

But just this morning, I read this article in The Atlantic in which researchers examine the way in which one person who wakes up grumpy can cause a chain reaction of negative energy, if that person happens to be a troll.

The word, in its original connotation, meant a monster that lived under a bridge and charged a toll. They were scary regulators of commerce, or highway-men of large stature with poor hygiene. They gummed up the works in fairy tales, just like they do now in the digiverse.

Most cities are located on the water, so they really need their bridges. When I lived in Brooklyn, and visited my family in New Jersey, I’d take the Holland Tunnel to the Manhattan Bridge to come home. I rarely came in through Staten Island, but I just heard the new toll on the Verrazano Bridge is $17.

The train from Newark Airport to Penn Station is $15, so unless you fly into JFK and take the subway, there’s no cheap way into Manhattan.

The trolls must receive their tribute.

It’s an island, Manhattan, the ultimate limited supply, which is why they built up to the sky. It’s easy to look up, in New York City, as the tops of the skyscrapers are so beautiful.

People will peg you as a tourist, if they catch you ogling the tops of the buildings. (Or if you walk through Times Square in general.)

But street photographers have long known that it’s better to look around you then up at the sky, down at your phone, or off into your own thoughts as the Ipod pops in your eardrums.

Street photographers know that if you just watch the city unfold, block by block, it is ALWAYS interesting, often fascinating, and sometimes downright sublime.

It’s never boring, Manhattan, a city where no matter what someone says they saw, you’ll always just respond, “Sure. Why not.”

I guess I can believe you saw albino triplets on tricycles going down the sidewalk. Or a monkey walking a dog on a leash?

The absurdity level is always turned up in New York, and if you have the time and inclination to look, the pictures are waiting to be taken.

It’s why there are so many cameras in Richard Bram’s “New York,” a photobook published last year by Peanut Press. (And printed in the USA.)

Richard is a friend of mine, and I’ve written about him in this column before. Frankly, he came up and introduced himself at the PDN Expo in 2010, when I did my first travel piece for this very blog.

He’s a smart, considerate guy, and recently moved back to London from Lower Manhattan. He did a stint of 8 years in New York, and photographed it for much of the time lived there. When I was at FotoFest in 2012, he showed me a rough edit of this project, so I’ve seen the pictures evolve.

What I like best about this book is that it captures Richard’s wry sense of humor. There are some images I might have edited out, but whether it’s a woman in a flaming, furry pink suit, or a girl in hot pink boots, they’re cleverly observed.

Cameras are everywhere in these photographs, which clearly marks them as being of-their-time. During those 8 years, the rest of the world became obsessed with our habit, so why shouldn’t cameras be a repeating motif?

There’s nothing mean-spirited, like Garry Winnogrand, though they do invade people’s space, if not their privacy. Unlike the aforementioned internet, cities push peoples’ bodies together. They force human beings to share air, and sidewalks, and square footage on the subway.

Richard observes with subtle curiosity, and it took me a few passes through the book to enjoy some of the nuance.

I love the grumpy guy who looks like he knows he’s being photographed, and he’s holding a creepy doll. The first time, I saw his face, and the doll, but only the second time did I see the nice Nikon around his neck.

Dolls show up again in some guy’s backpack, though they likely just belong to his daughters. Later, he photographs a man, photographing a dog, in a car, with a cameraphone.

We see a guy sunbathing, shirtless on the sidewalk, surrounded by spray paint and barricades? Why not?

Or the little boy wearing ducks on his cowboy hat? Which follows the pink furry lady, and precedes a guy spray-painting gold a naked, apparently Asian mannequin, next to some giant orange traffic cones.

Sure. I’ll believe it.

Last week, I told you I’d try to scare up something silly, so I looked at my submission shelf, and this book was just right for today.

Look around. (That’s today’s message.) Look around, because it’s fun. And who knows what you might see? 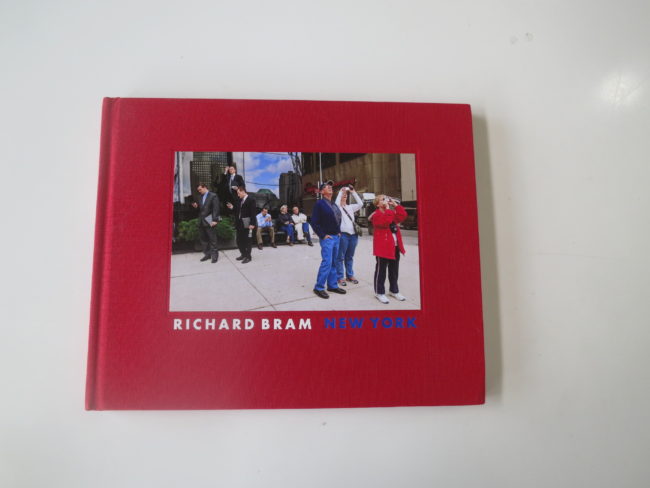 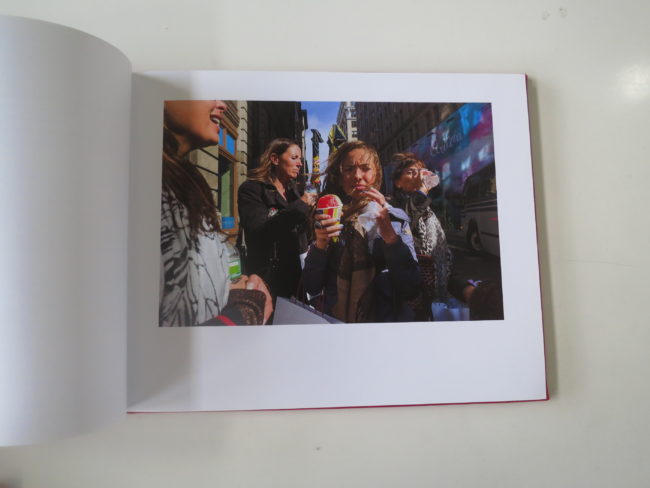 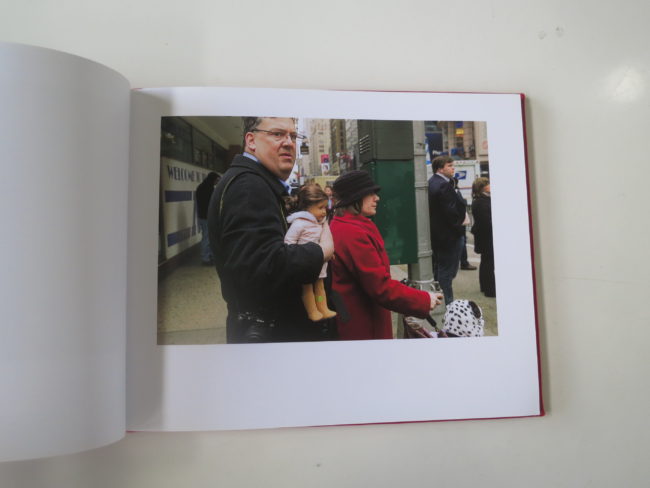 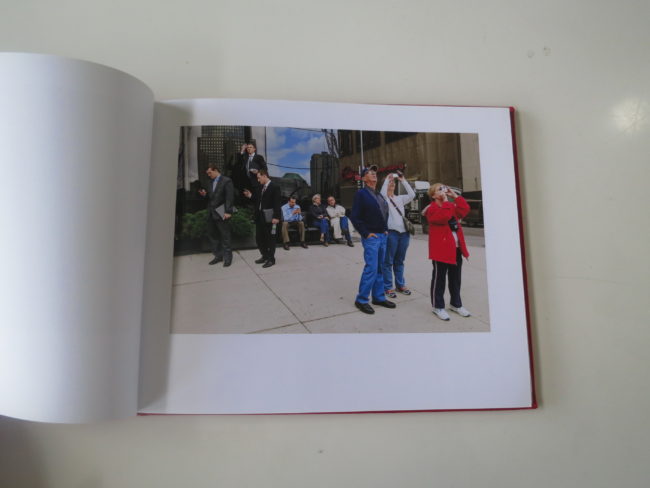 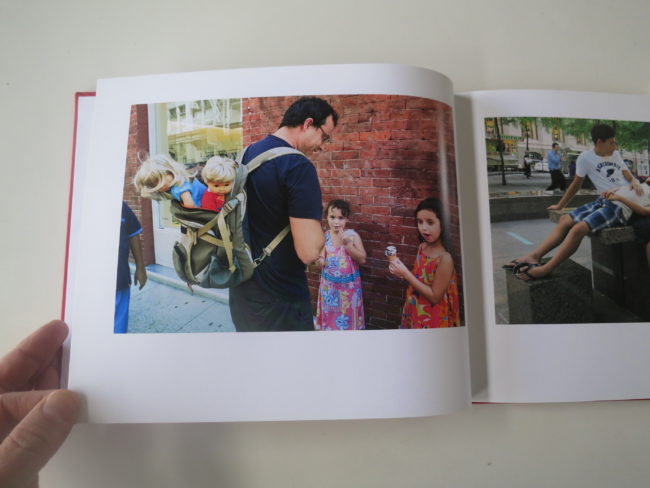 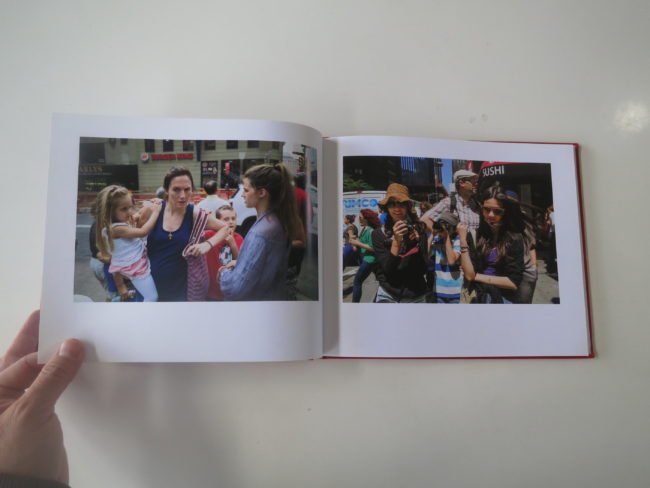 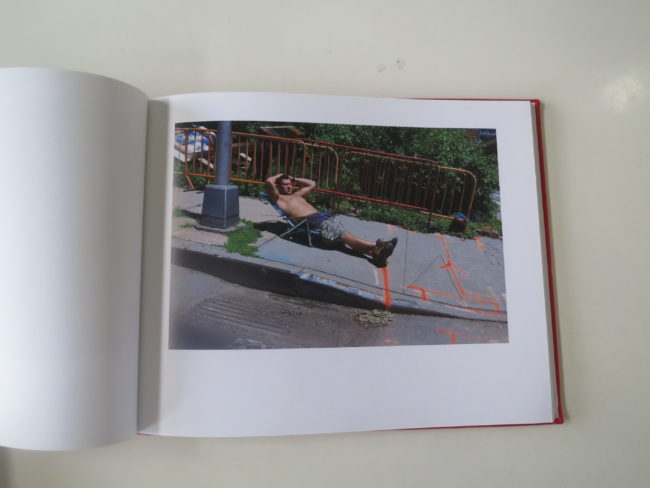 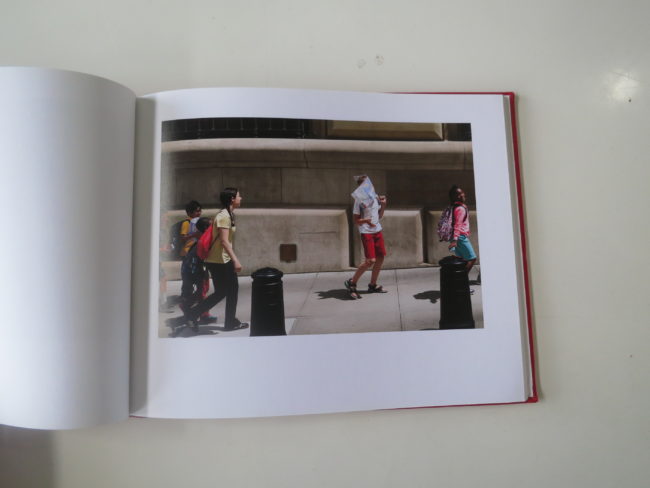 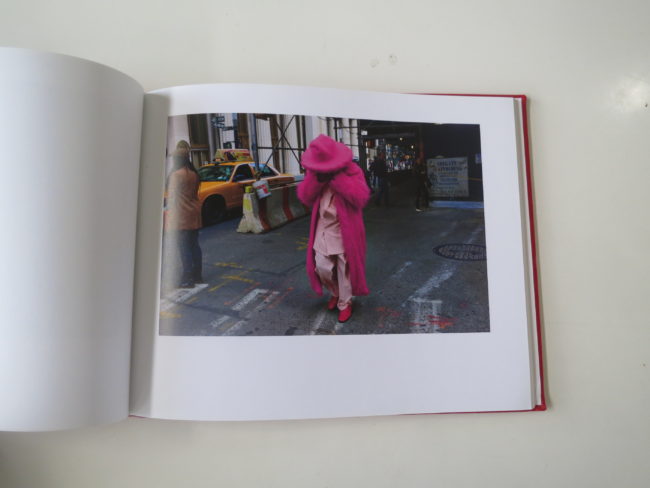 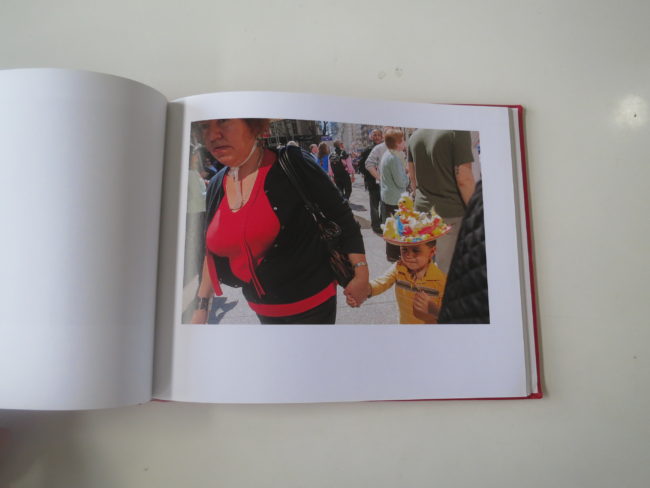 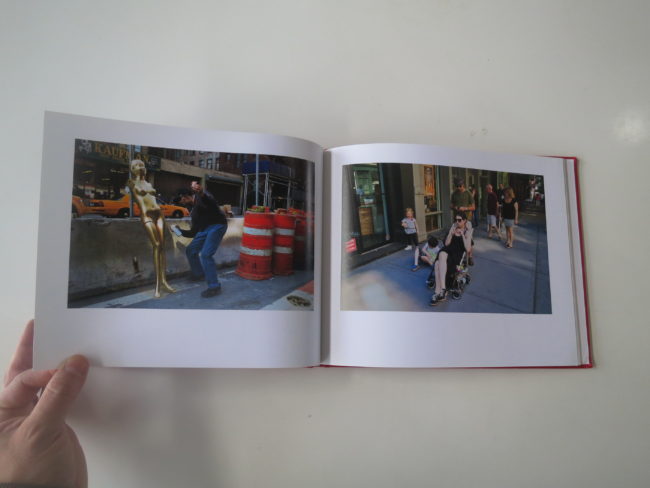 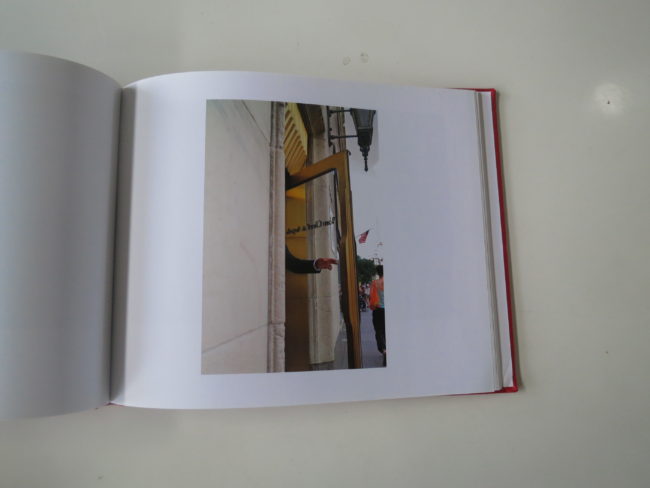 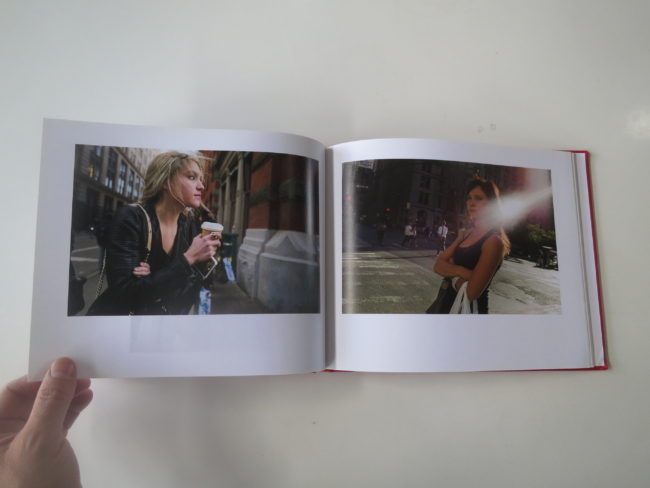 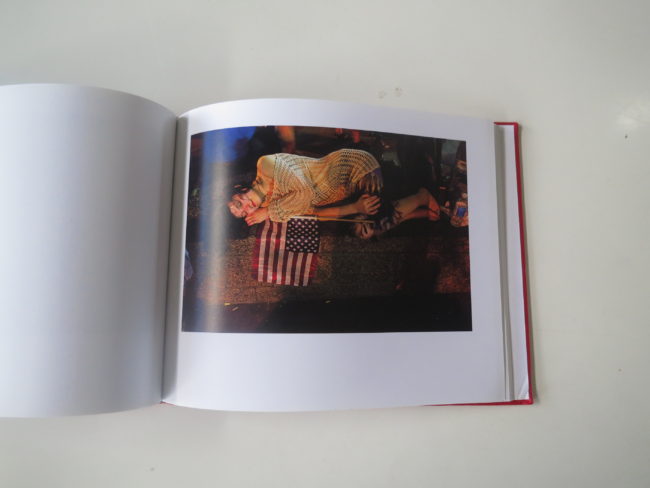 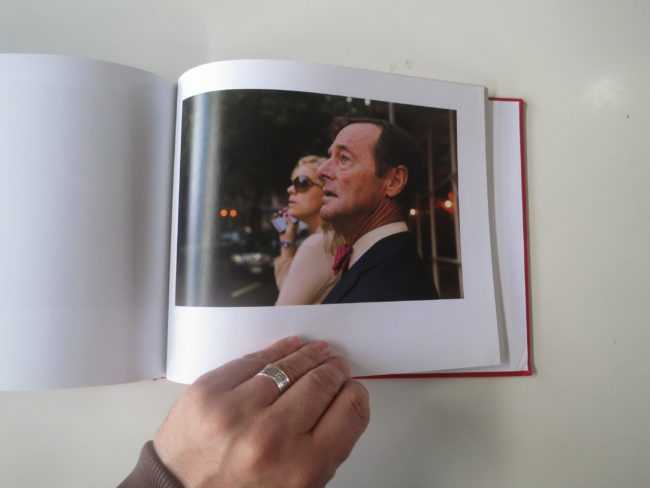 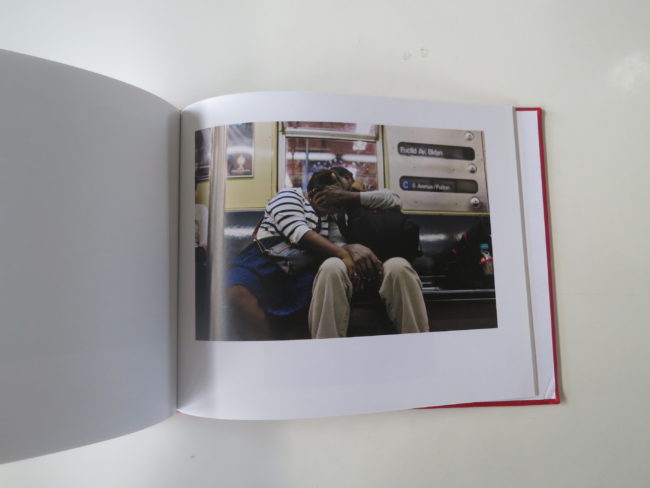 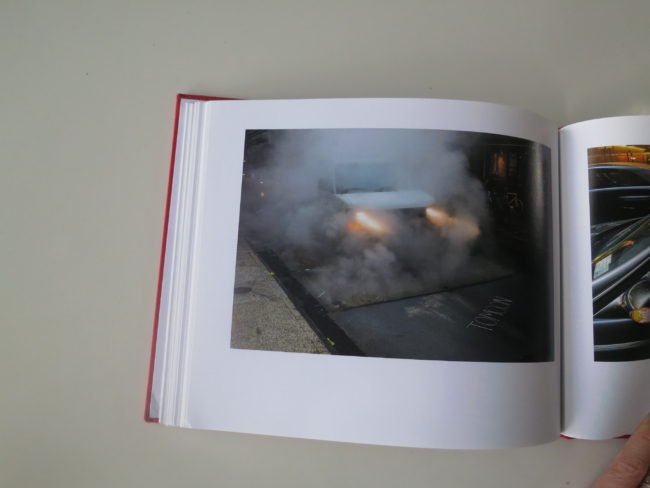 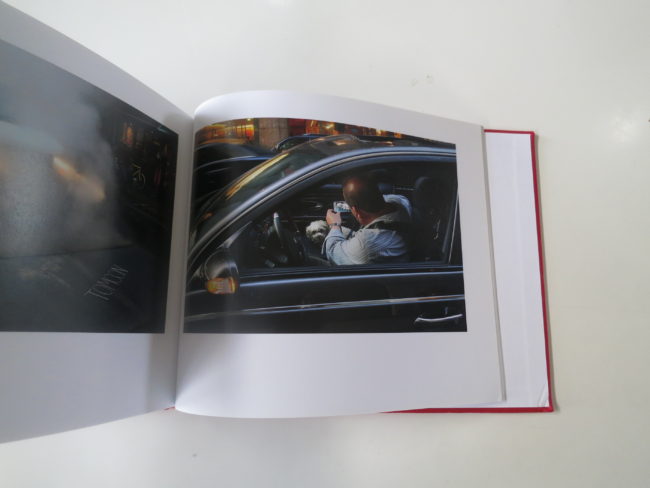 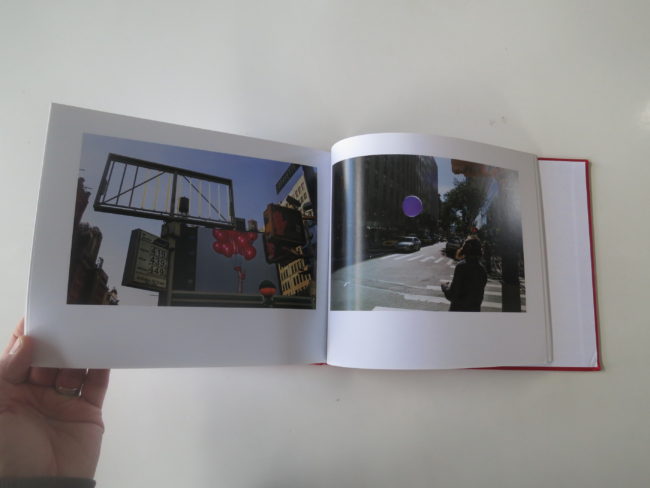 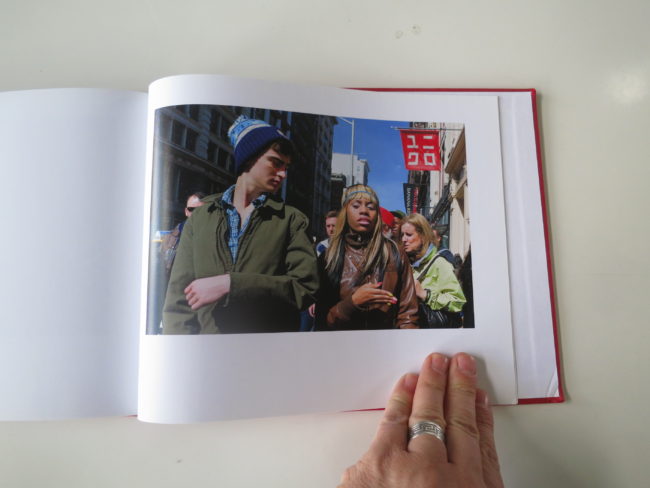