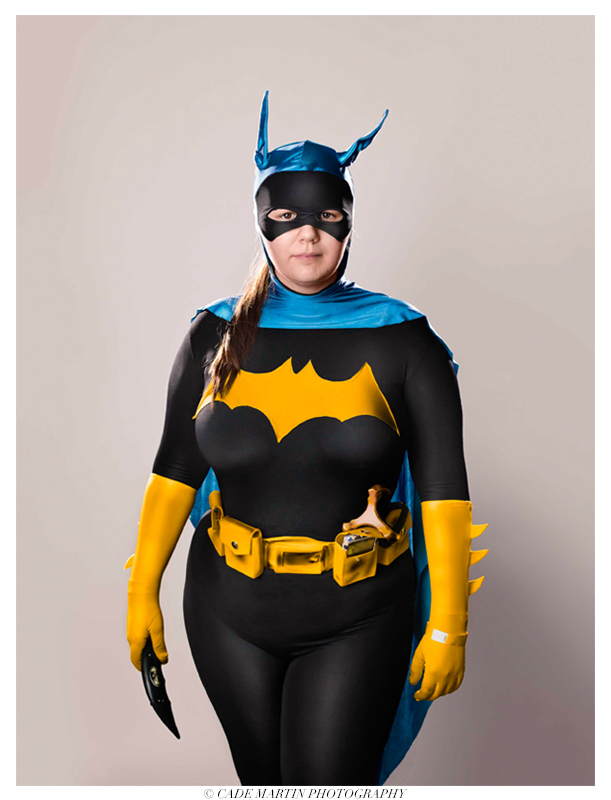 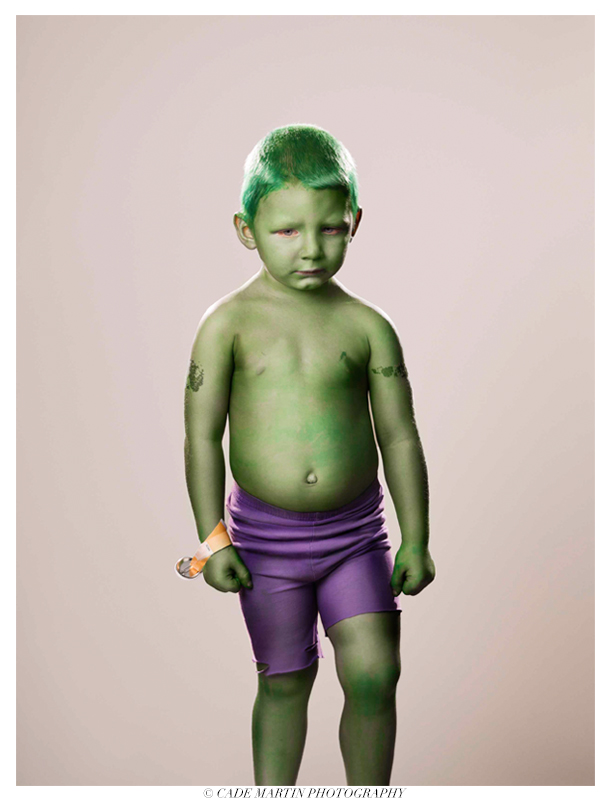 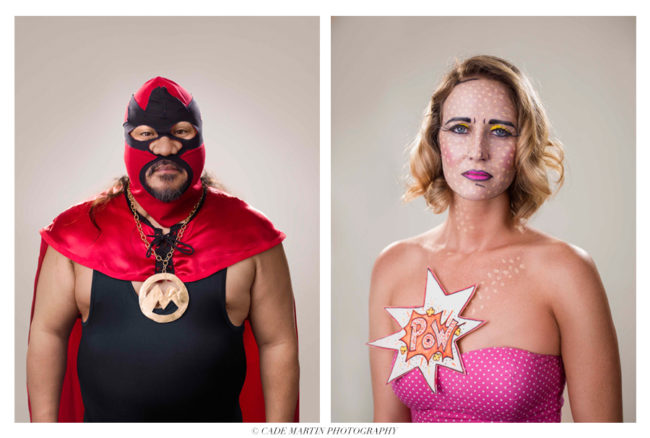 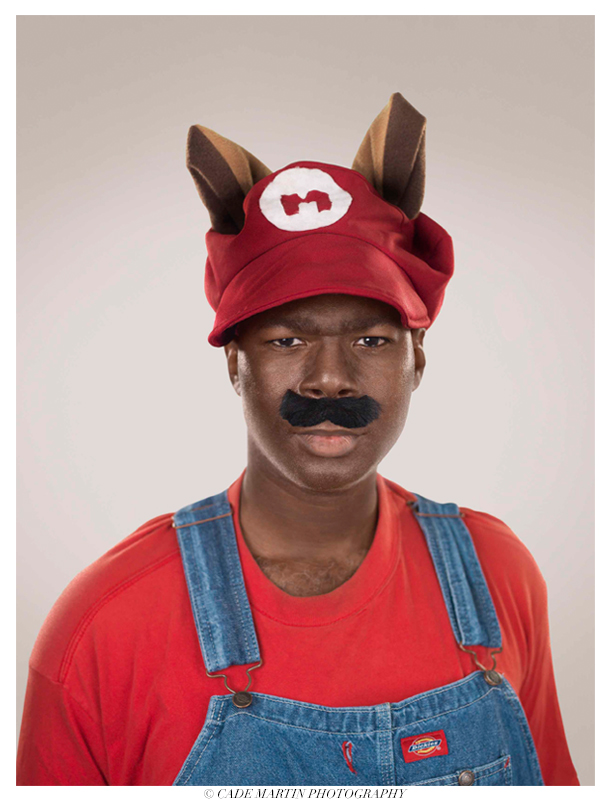 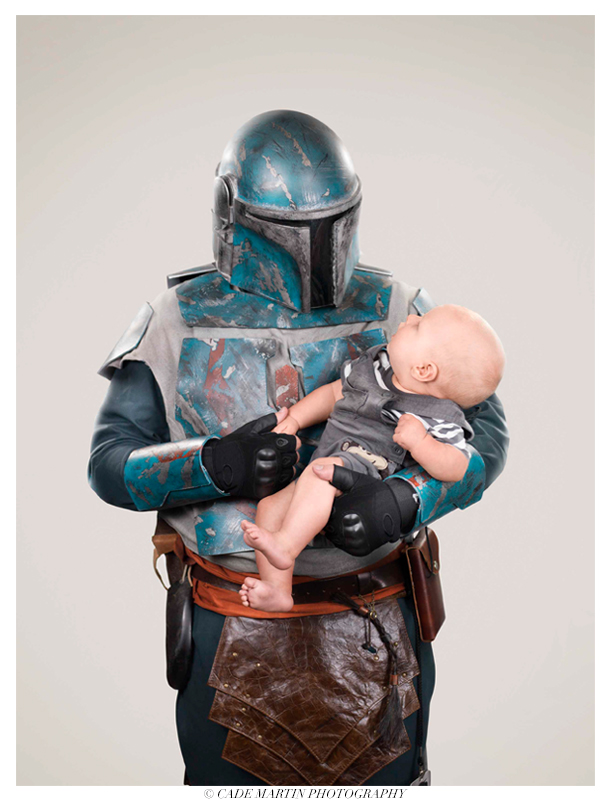 How long have you been shooting?
I first picked up a camera half way through my sophomore year in college. Which was long enough ago. Truthfully, I almost didn’t pursue photography at all. I hated working in the darkroom – all the running water made me have to use the bathroom. Early in college, I contemplated a career in computer programming but shelved that and here I am today.

Are you self-taught or photography school taught?
A little bit of both. I grew up at the ankles, knees and hips of a community of artists – my father was an art professor – so I believe in some ways I obtained a visual education through my everyday environment. In college I focused on photography and art history with a non-traditional, general studies degree. After school, I was an assistant/apprentice for a few years before striking out on my own, 24 years ago.

With this particular project, what was your inspiration to shoot it?
I’ve been reading and collecting comics as well as going to comic book conventions since I was a little boy, comics are a big part who I am. I’m an only child, and I, like a lot of only children, grew up surrounded by adults and invented my own worlds in my head. I’ve always been a daydreamer and my primary school years were often filled with my mind wandering to what I’d found and expanded upon in movies and comic books. Sister Charlotte, I’m not sorry. Tintin, created by Herge, is my favorite fictional character of all time and Tintin adventures are what I always wanted to have.

Comics took me everywhere – different countries, different worlds, super heroes, secret identities, romance, war and evil lairs (who doesn’t love an evil lair) to name a few. Colors, sights, sounds – different artists, different genres, nothing was too outlandish and anything was possible – the lack of boundaries was and has been very inspirational.

I’d envisioned a super hero project for a while now and the how or where escaped me. A few years ago I was hired for an editorial project to create portraits at a Civil War reenactment, here we set up a photo studio off to the side of a battlefield so we could strip these re-enactor’s of their environment. I sort of had an aha, duh! moment and thought, in regards to a Comic-Con – why don’t I do this there.

My approach for Comic-Con (and others since) has been to set up a photo booth, and embed myself in the environment. I’ve rented a space for a couple years now at different conventions and built a “studio.” Once set up, I approach people walking around that are interesting to me. It’s performance art and it has it all – creativity, execution, passion, commitment, celebration, voyeurism, exhibitionism and sex. You can see a BTS peek into how this works by going here: https://vimeo.com/182563518

This personal project is no small part nostalgia, married with a visual bonanza, and a captive audience. The people who dress up and take so much time to prepare for Comic-Con have stories to tell, with their costumes and with what’s behind them. I want to show these people in the best light. I found a real affection for these characters – fascinating and interesting people who are expressing themselves through a genre that had always spoken to me. I am always amazed by the amount of commitment and passion the people put into their costumes and make-up for these events. In a way, this is their personal project, which I find admirable and I’d like to think it’s been a creative partnership. I have found it fascinating and it’s been an honor to capture how people bring their favorite characters and vivid imagery to life.

How many years have you been shooting this project before you decided to present it?
I’ve been working on the project on and off for approximately two years. I’ve photographed at three separate events, one Comic-Con and two Awesome-Cons. What you see here represents just some of my favorites out of the 325 that I’ve photographed. I know that a project is ready to show when I’ve made something that I’m proud of or when I feel like I’ve got the right balance of content. I’ve been showing a few of these images here and there and have gotten a great response so far. I have loved the reactions and expressions when people see the images but at the same time I have also wanted to push the series a little further. Maybe it is as much about me, wanting to continue to have the experiences and interactions with these people in these environments.

Time-wise, it’s difficult to say because so often one thing leads to another, and the kernel of one personal project can inspire and inform the next. I file all of it under my continuing education and when I find a subject that I want to know more about, I jump in and see where it will take me, what I will learn about myself and from those that I meet along the way. From Comic-Con, I have started a Tattoo portrait project and from the Tattoo convention I went to a Blues Musician festival in the Mississippi Delta. Most recently I started working on a Vietnam fighter pilot portrait project. Maybe it’s fair to say a personal project never dies or stops working, it just feeds the next.

Since shooting for your portfolio is different from personal work, how do you feel when the work is different?
Creating an image that works and has aesthetic value feels good no matter what. And having the result of a good photograph or series be different from what I may have already done is exciting. You have to keep innovating. I want different, to push my boundaries and be surprised by where my photography takes me. I love this quote by John Cage “I can’t understand why people are frightened of new ideas, I’m frightened by the old ones.” Personal work gives me the space to try new things and react to inspiration. And, work that is different from my existing portfolio can be a gateway to new commissioned projects. Work I’ve self-assigned is sometimes stuff I’d love to do in a commercial capacity, and it has ended up being a case of do the work to get the work.

Have you ever posted your personal work on social media venues such as Reddit, Tumblr, Instagram or Facebook?
Yes. I post different mixes of my work on Tumblr, Instagram & Facebook as well as on Twitter. I use these platforms differently but all as spaces that allow me to play in a sandbox that I might not otherwise; to share my projects with these communities, both the commercial and personal work, the feedback sometimes strengthens and influences me in different ways.

If so, has the work ever gone viral and possibly with great press?
Nothing has blown up Gangnam Style but a few of my projects have been pinged around online through various outlets. I worked on a personal Day of the Dead project in Mexico last year and it appeared in the Huffington Post Travel section as well as PDN, Workbook & Altpick.

While going viral and having eyes on the work is great, I try not to get too caught up in keeping count. It’s certainly great to get the images out in the world and wonderful if the response is favorable but I’m really doing these personal projects primarily for myself.

Have you printed your personal projects for your marketing to reach potential clients?
Definitely. I love printed promos. For this superhero portrait project we had a lot of fun exploring designs and ended up going with an 18”x24” poster, 2000 of which will soon be mailed out in clear tubes. I’m really excited to get these out in the world, to have these characters inspire others as much as they do me. 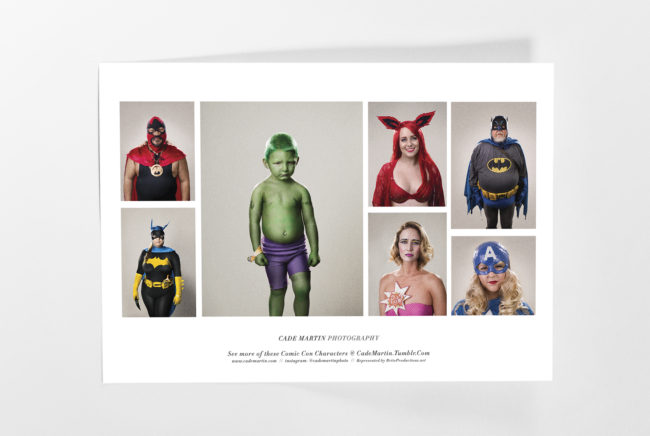 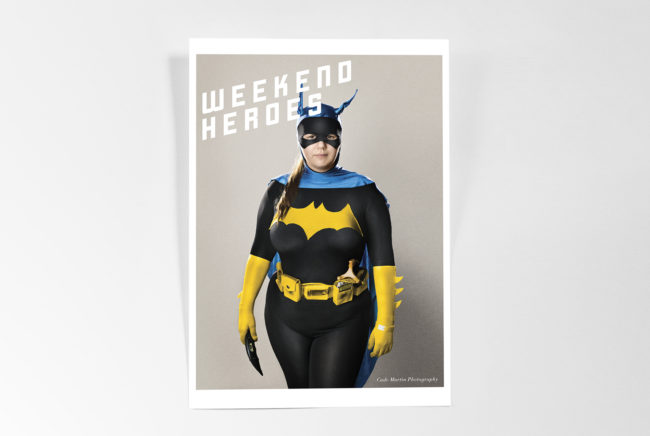 The only child of a university art professor and a freethinking mother, Cade Martin grew up immersed in a creative community in Richmond, VA. The foundation for his love of art and composition was laid in museum halls, movie theaters and art studios, and at home around a dinner table inhabited by an eclectic cast of characters who shaped his appreciation for the candid beauty found in people from all walks of life. Cade has been chasing characters ever since. He seeks their stories – through their faces, their bodies and sometimes their costumes – in a common thread from his commercial work to his personal projects – characters are the heroes in his pictures.

The Art of the Personal Project: William DeShazer