Licensing: Unlimited use (excluding broadcast, OOH and packaging) of all images captured in perpetuity.

Location: An outdoor event in the Northeast

Agency: Medium in size, based in the Midwest 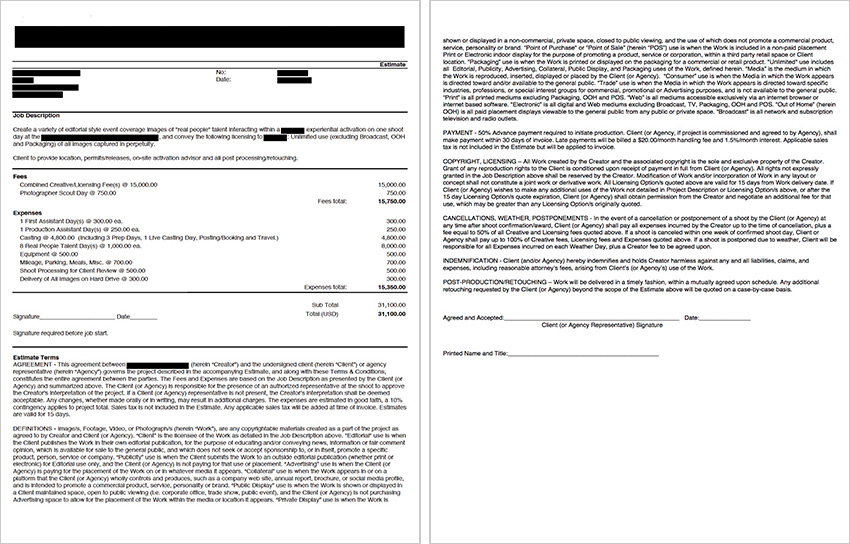 The first thing to note about this project is that the client was a tobacco brand. That fact alone is a deal breaker for a lot of photographers, and in fact, before we knew anything about the scope of the project, the agency wanted to know if the photographer would even consider taking on a project for this type of client. Fortunately for them, it was something the photographer was okay with, pending the budget.

We learned that the agency was tasked with developing an experiential activation which would be set up and the general public would be encouraged to visit their large footprint over the course of a few days throughout the larger event. While their initial consideration was to hire a photographer to capture event coverage images of real people interacting within the staged environments, the potential issues regarding model releases for a brand like this, and their need to have a bit more control over the production and timing led them to casting talent and staging the event before it opened to the public.

While they requested unlimited use (excluding Broadcast, OOH and Packaging), it was very clear that their intended use was primarily for a small section of their website, and to simply document the activation for internal use or collateral purposes. That being said, the images could have potentially been used for print advertising given the licensing terms they requested, but again, based on the advertising this brand has previously done, none of the images resulting from this shoot would be on-brand for advertising initiatives, and that was very unlikely. Additionally, we knew that they had started the project by reaching out to event photographers who might charge hourly rates as opposed to taking into account licensing fees.

All of those factors put heavy downward pressure on the fee, but given the client and the photographer’s experience, we decided to price this more in line with a lifestyle library shoot, rather than event coverage, and landed on 15k as a combined creative/licensing fee.

Photographer Scout Day: While we received detailed renderings of the activation footprint, we wanted to make sure the photographer had a sense of the various environments within the area beforehand, and they hoped to get a sense as to what potential staging areas might exist on location.

Assistants: In addition to the photographer’s assistant, who would help with grip and equipment, we included a production assistant to help obtain releases from the talent and generally be an extra set of hands and a runner if any items needed to be procured on the shoot day.

Casting and Talent: We reached out to a local casting director who would help us find “real people” talent (as opposed to casting professional talent). They needed to identify with the brand and be a smoker, and the casting director specialized in finding just the right type of people, and had done so previously on similar projects. The quote we received and integrated into the estimate included 3 prep/research days and 1 live casting day plus potential travel and bookings. For “real people,” our casting director suggested that $1,000/day plus access to the event would get the job done, and since the event would happen over a weekend, that made it even more palatable for potential talent who wouldn’t even need to take off work.

Equipment: We included a very basic rate for a camera body and lenses, as the shots would primarily be captured using available light.

Mileage, Parking, Meals, Misc.: We included $300 to cover parking and meals for the three crew members, $100 to cover mileage and $300 for miscellaneous expenses that might arise.

Shoot Processing for Client Review and Delivery: While the agency would handle the majority of the post processing, we included $500 for the photographer to do an initial edit/color correction, and then we included $300 for the purchase and shipment of a hard drive.

Results: The photographer was not awarded the job, but we found out that they ultimately went with a photographer whose bottom line was a few thousand dollars higher.

The Art of the Personal Project: Billy Delfs