“About Time: Photography in a Moment of Change” at SFMOMA

I promised I wouldn’t talk about him anymore, yet here I am. The man is simply inescapable.

With all the fear about Trump being the Republican Presidential nominee, I’m sure you’ve looked at an electoral map in the last day/week/month, right?

Of course you have.

The map, with its massive blocks of red and blue, tells a story that we all-too-conveniently forget. This nation of ours, the United States of America, has not always been United.

Back in the 1860’s, all hell broke loose. America was cleaved in two, and bodies piled up higher than Dr. Dre during an all-night recording session. (Yes, that’s pretty high.)

But you know that as well, because you learned about it in history class. We all did. Civil War. Slavery. Abe Lincoln good, Jefferson Davis bad.

That’s the narrative we’ve all been told, again and again. But I suppose I ought to clarify who the “we” is here. I grew up in New Jersey, in the heart of Yankee country. (Though parts of NJ did have slavery, unfortunately.)

There was never any question as to who the “us” was, as opposed to the “them.” Southerners. Rednecks. Racists. KKK lovers.

They deserved what they got. Right?

While you’ll never catch me questioning the validity of the Civil War, it’s easy to side with blue, 150 years later. And wouldn’t you know it, but that “blue” team’s map lines up pretty neatly with the current “blue” crew as well.

The South is united in its support for Donald J Trump, and most artsy/liberal/creative types, (meaning you and me,) have a very hard time understanding the mass appeal. The man is an orange, braggadocious prevaricator, and I’m being kind.

So why would so many people, across so much terrain, see this lunatic as a potential savior? Why would they trust him to “make America great again,” and when exactly was America great?

I had the chance to visit the new SFMOMA when I was in San Francisco, as I mentioned in last week’s column. The museum has more than doubled in size, after a 3 year, $305 million renovation. As San Francisco has arrived, so has its most prominent art institution. (Though the deYoung Museum might quibble with me on that.)

I had the good fortune to spend almost 3 hours in the museum, looking looking looking. Paintings, sculptures, photos: the new museum has it all. You might have even heard they now have 15,000 square feet of exhibition space in the Pritzker Center of Photography. (It made the rounds on social media a few weeks ago.)

To say that I saw a lot of art in my time there is a simple understatement. I saw hundreds of images and objects, as I flitted from one wall to another.

Look, think, step to the side.
Repeat.

I wanted to see the “California and the West” show, as I’m writing about it. But there are two major photo shows occupying all that choice real estate, and the other was just as good: “About Time: Photography in a Moment of Change,” curated by Corey Keller. (through September 25th)

No matter how good the art is, there’s only so much our brains can absorb, in a marathon session. So I like to give myself a little test, and just focus on the things that really grab me. It’s fun to have excellence radar, or in my case, a “things I’ve never seen before” gauge.

The more you see, the harder it is to send that meter into the red, but it does happen.

The first time was essentially by accident, as I was standing in front of some images by the LA artist Phil Chang, and the lady behind me made a loud, unhappy snort, like a horse that hates its supper. 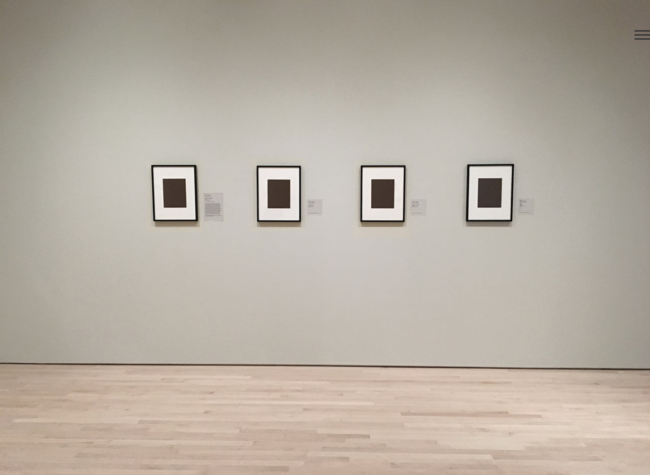 “Excuse me,” I said, “but did I step into your viewing path? If so, I apologize.”

“No, she replied. Her voice became inaudible, as she was clearly distressed, and she finished with “Emperor’s new clothes.”

Before you knew it, I was right back in art professor territory, and tried to explain to the woman what there was to “get.” Apparently, Mr. Chang makes gelatin silver prints, like many photographers, but he chooses not to fix the images.

He invites people, like the curator, Ms. Keller, to watch the images as they slowly fade to black. It’s meant to be performative, I suppose, and it’s possible no one has ever thought to do that on purpose, or to turn it into a concept.

That’s what I told this grumpy stranger, who nodded, accepting that there was more to the work than met the eye. (Simple, all black images, the photo equivalent of Ad Reinhardt.) She walked away, determined to find something of which she approved. (And I Googled Phil Chang when I got home. He’s a part of the super-trendy “Photography is Magic” clique, so I understood things in that context.)

Will I remember his work now? Absolutely. Am I surprised that a concept as simple as not fixing your work has gotten this dude famous? Not really.

I understand the way the world works. I might be obnoxious, but they don’t call me stupid.

That work stuck out because of its concept, as it was meant to. Paul Graham had a diptych in the show that was hung just above the floor. Again, you could call it a gimmick, or you could say it’s challenging orthodoxy, and both would be right.

(But I don’t remember the images as clearly as where they were hung.) 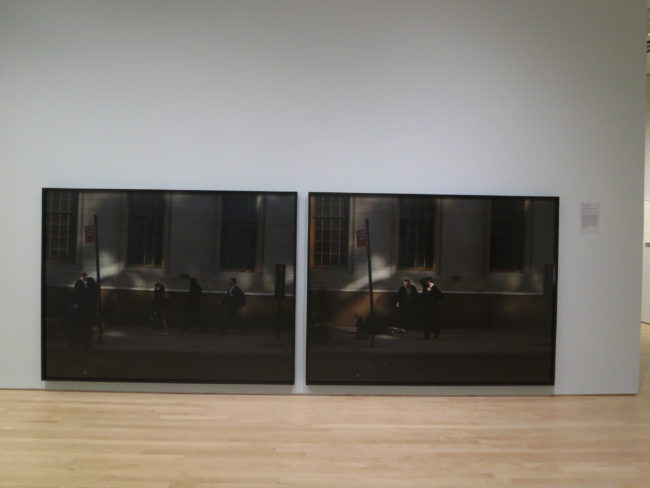 So many pictures, so little brain space. It’s an excellent show, that much is clear, and you should go see it if you can. But nothing really shook me inside and out until I got to the very last room in the exhibition.

There I stood face to face with a suite of images by George N. Barnard, a photographer of whom I hadn’t heard before. Not surprising, given he’s been dead for more than a century. (There was no Facebook to promote yourself in the 19th Century, unfortunately.)

His images were a part of a series, “Photographic Views of Sherman’s Campaign,” that looked at the South, during and after the Civil War. It focused on locations that had been wrecked, destroyed, annihilated, by the famed march of William Tecumseh Sherman. And I had never, ever seen pictures quite like this before.

Sure, we’ve all seen a Matthew Brady or two, and if you read regularly, you know I have a soft spot for Roger Fenton. But this was something different, for me at least.

The prints just felt so real. So lived. So ancient. And there were so many of them.

The photographs were obviously well-made, with terrific compositions and excellent tonal range. You can almost see this man, living in an unrecognizable world, standing among smoldering ruins with a big camera.

You don’t have to imagine what defensive Earthworks look like, if you don’t want to. These pictures show you quite well. Bulwarks, bastions, who the hell knows what these are called, but the spiked wooden fences were pretty hardcore, if you ask me.

There’s an image of a soldier in a stove-pipe hat, sitting on top of some ramparts outside Atlanta. (Are they ramparts?) I stared at that picture for a few minutes, my brain trying desperately to comprehend it was real.

That’s one of the true curses of our digital age: we are all so ready to accept the digital world is “real” that it can make us question reality as it actually transpired. If everything can be faked, how are our eyes to recognize lived history?

Sure, I know who won the Civil War. And yes, we’ll always condemn slavery wholeheartedly, even when the Donald equivocates. (I need more info before I disavow the KKK, OK? I want to have an informed opinion, you losers.)

But these pictures, more than any I’ve ever seen, helped me understand that aforementioned electoral map. Half of our country was conquered by the other half. Its landscape was altered, its soul diminished, but its pride remains in tact.

Perhaps we ought not blame the Southerners who feel ruled by outsiders, and wittingly join leaders who promise a return to prominence. But empathy is hard, especially with a bloc of people known for a dark, exploitative history.

But I went into an art show, and came out with a different perspective. That’s about as much as I ask of any museum, or any photographer for that matter.

SFMOMA was kind enough to provide an entire set of Mr. Barnard’s images, as jpegs, of course, so you can view them on your screen of choice. (Phone, tablet, computer, TV…)

That’s right. Some albumen prints, made before any human being alive today, have been digitized, for our pleasure. (Bringing the Civil War into the 21st C.)

So next time you make a crack about the hicks in South Carolina who just don’t know any better, just remember that they’re likely carrying grievances we really can’t understand. And the best photographs help us see the world from someone else’s perspective, even if that person has returned to dust.

The Art of the Personal Project: Gabriela Hasbun