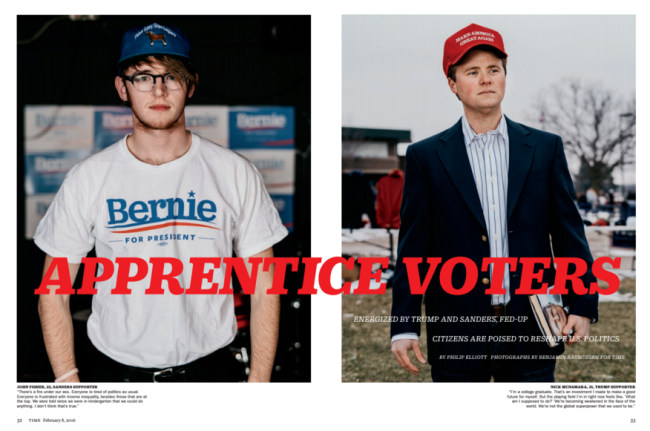 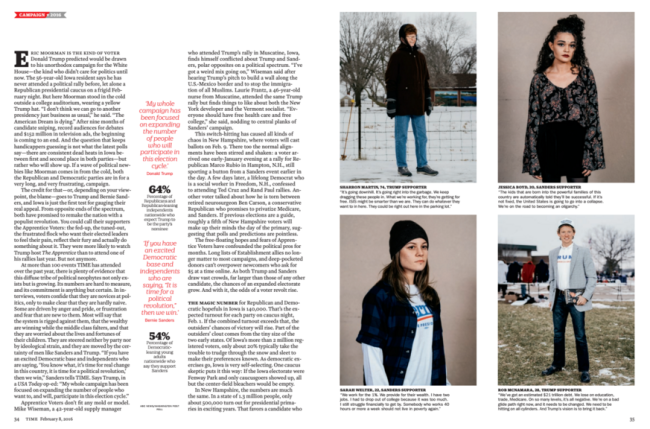 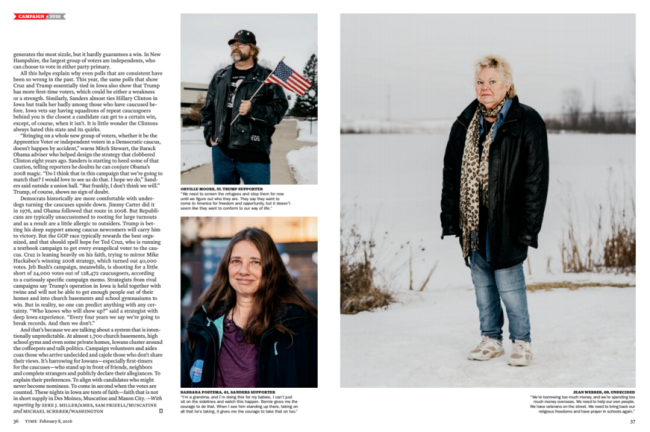 Was this your first project with Time?
Yes, this was my first assignment with Time magazine, so I was pretty terrified going into it. I grew up in the rural Philippines and every couple of months we would get our mail and there would be a pile of Time magazines to explore. It has always been the one that got away and has a lot of my favorite photo editors, so I was both incredibly excited and anxious. I got the call for the assignment on Thursday and then flew out Friday night and shot Saturday and Sunday.

What type of direction did you get from the magazine?
Paul Moakley wanted clean environmental portraits of newly engaged voters. He referenced work that I had done of protestors in Ferguson for Bloomberg Businessweek, which is a style that I usually shoot on Polaroid in really active and sunny situations. It is a flat lighting style that relies on the energy and personality of the person being photographed to carry the frame. I tweaked it a bit because of shooting digital medium format instead of Polaroid and because we were photographing in grey and snowy Iowa.

How did you decide who to approach for a portrait?
Because the style relied so much on the subject, I was really intentional about trying to find people who had a presence to them that could translate photographically. But because they needed to be newly engaged voters and were going to be quoted, they also needed to be thoughtful and articulate. Sam Frizell, the writer from Time, and I would talk with people in line and then tap one another if they would work visually or for the story.

How did you engage them during the shoot?
I would chat at the beginning and build some rapport as we walked from the line to where we were set up to shoot; I would try to listen as Sam interviewed them. During the shoot I would ask them to think through a specific scenario, which would change depending on what they had said during the interview. One man said that the only candidates he had ever liked were Ronald Reagan, Ron Paul and Donald Trump; so I asked him to imagine sitting with the three of them for five minutes and what he would want them to discuss. Or I would ask a person to image the feeling of the evening of November 8 and their candidate declaring victory.   This would put people in a thoughtful and internal space, which tended to carry into the portraits.

How long was each portrait?
Sam would interview people for about five minutes or so, and I would photograph them often times for just a few minutes more. We were typically taking people in groups of two – four and were rushing to get them back to the line so that they wouldn’t lose their spot.

I know this was your first job with Time, did you send them promos? Is that how they connected with you or did you have meetings with them prior to the assignment?
Time was near the top of my list when I started doing promo books five or six years ago. And I would always try to come by when I was in New York with my book and show new work and get their thoughts on it. My project By The Olive Trees that I did with Michael Friberg was featured on Lightbox and I have had other interactions with the crew there as well.

I tend to take a pretty long view with these kinds of relationships. I like and respect the folks at Time because I think that they are really good at what they do and they have a passion for good photography. Whether or not I work with them immediately, or ever, doesn’t directly impact how I feel about them. Some of my favorite photo editors work at places that I am not a good fit for, but I will still always keep up with them and reach out because I respect them and love getting their insights.

The Art of the Personal Project: Pete Barrett