You live in a desert near the Pacific Ocean.

It’s hot outside, and terribly dry.

Let’s call you Catequil, which means God of Thunder and Lightning. (According to the Inca-themed-dog-naming website I found on the Internet. So it has to be true.)

You, Catequil, aren’t much good at weaving. Your Dad is a decent enough farmer, but it’s not for you. Your brother is a warrior like nobody’s business. Man, is that dude good at killing people.

But you? Your reflexes are not that quick. Nor are you terribly co-ordinated, in the traditional sense. And for whatever reason, you just don’t have the green thumb.

Most people don’t, this being the desert, of course, but your Dad is so good at it. The way he looks at you, it’s just heart-breaking. You know he’s thinking, “How can I have a son who can’t grow things? Who can’t fight? Such a disappointment, my Catequil.”

It’s pretty tough, all things considered. And right now, you’ve got a piece of peanut stuck in one of your back teeth, and it’s driving you crazy!

Then one day, your friend, Khuno, (which apparently means High Altitude Weather God) comes to you with a good idea. He just heard about a new job, doing construction, and it pays well. 10 peanuts a day! Can you imagine!

You and Khuno go and see the foreman.

“What are we building, sir,” you ask?

“Come again? Surely, if you’re paying so well, we must be building something important. A new temple? A food storage facility? A fortress? You can tell us. We’re good at keeping secrets.”

“No, I’m not deceiving you boys. We’re not building anything at all.”

“Then why are you hiring a crew?”

“Because we’re going to scrape some lines into the ground, so that the gods in the sky will smile down upon us, and bestow their bounty on our people.”

“I said, we’re going to make shapes in the dirt that will make sense from the sky. Spiders. Monkeys. That sort of thing. But to us, they’ll just look like lines in the dirt.”

“Absolutely. The high priests say this job is getting fast-tracked, so the compensation is particularly attractive. You should count yourself lucky. We only wanted Khuno because his name is considered auspicious for this project. He vouched for you, so you’re on the crew, if you want the job.”

Did this actually happen?

Well, of course not. But something like it must have. How do I know? Because I just finished looking at “The Lines,” a relatively recent book by Edward Ranney, published by Yale University Press. (Mr. Ranney, a New Mexican, is my good friend’s father-in-law, FYI.)

If you’ve taken a Latin American Art History class, EVER, you’ve heard of the Nazca Lines. Large scale, Ancient Earth-Work art installations, designed to be seen by no human. Certainly, not until helicopters and planes were invented, which would not have been foreseen in Ancient Peru.

Aerial photography works well for such things, but Mr. Ranney, who has been photographing archaeological sites in Peru for decades, did it differently. These pictures deviate from our expectations, because they’re taken at ground level. We see from the perspective Catequil might have witnessed, were he not a figment of my imagination.

This book, in fact, contains photographs made in the 80’s, 90’s and Aughts. It feels like he took his time, as you ruminate on each picture. The patient vision. Squinting into the sunny desert light. Staring at the subtlety of almost nothing. Dirt on dirt.

That it’s black and white is almost self-evident, as how else could one speak to the terribly old and eternal? If Richard Misrach went down there with his big camera and some color film, he’d probably do a good job. But this kind of bleak needs grayscale.

The suggestion of deep time.

Normally, I would have opened this review with some rambling diatribe about human obsolescence. How we’re here for such a short time. How our civilizations, no matter how advanced, are likely to crumble to dust one of these days.

But that’s not how it went, is it?

This book, thoughtful and serious though it is, transported me back through time. I imagined what I wrote, so I wrote it. There WERE people. They DID scratch into the landscape. They worked hard, over many, many years.

And for what? A dream? The belief they’d curry favor with the power in the sky? A good pay packet and dental insurance?

These pictures are really excellent. I love the pacing as well, though the book did run on a little longer than I might have done. For the first third, it’s totally spare. No signs of humanity anywhere.

Then, we see some power poles. And valley land that reads darker than the rest. Grass? Water? From where?

Unfortunately, this could well be what New Mexico looks like, one day, in the distant future. (If we don’t play our cards right.) Which is why visions like this, ripped from history, are so important at the present moment.

Bottom Line: Gorgeous, bleak photos of the Nazca lines, on the ground

To Purchase “The Lines” Visit Photo-Eye 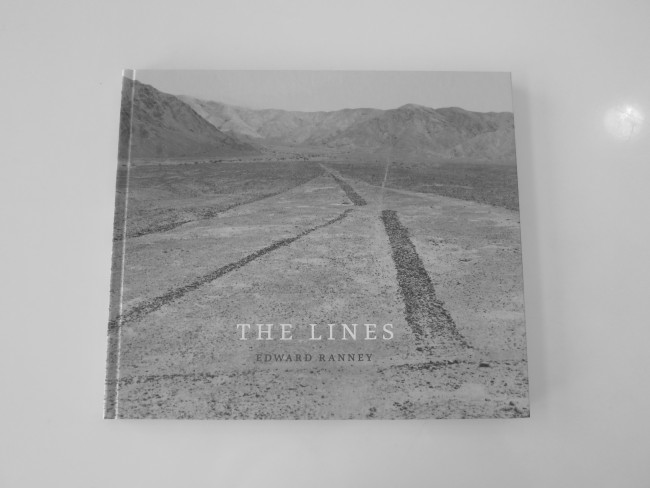 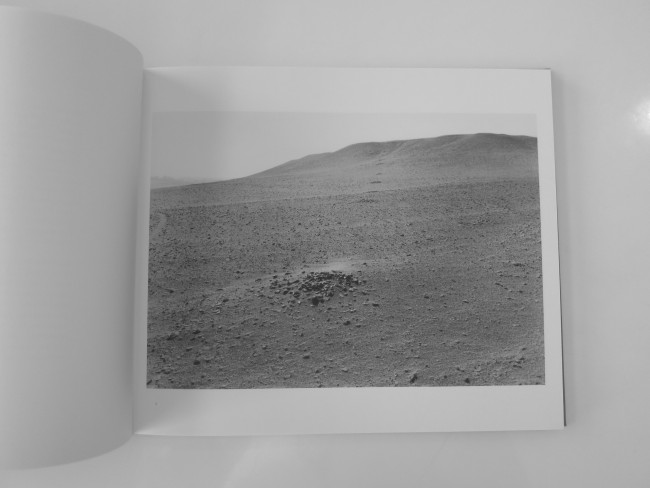 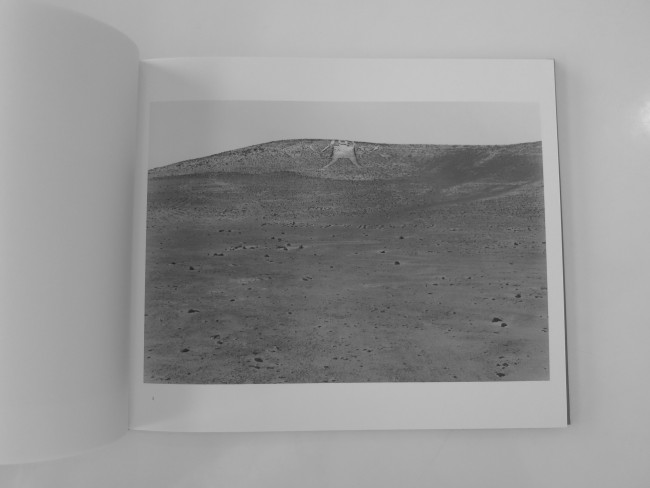 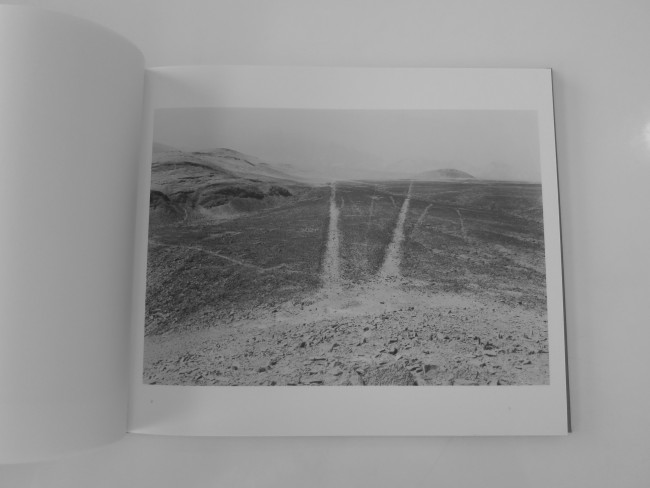 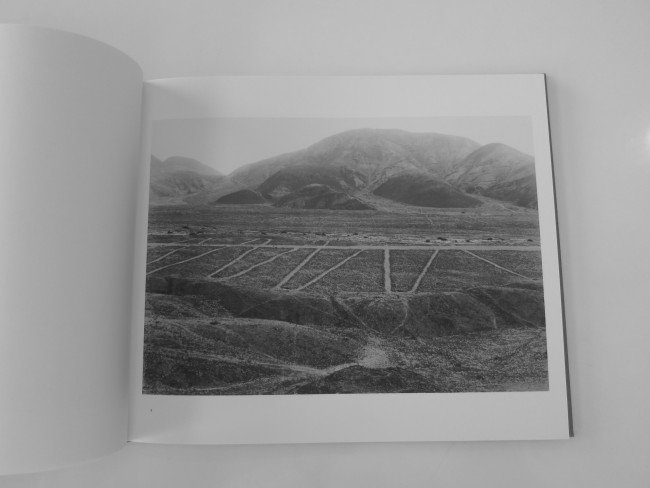 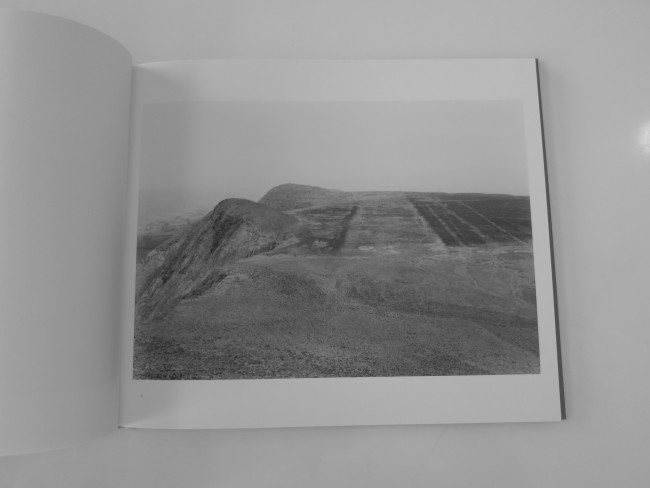 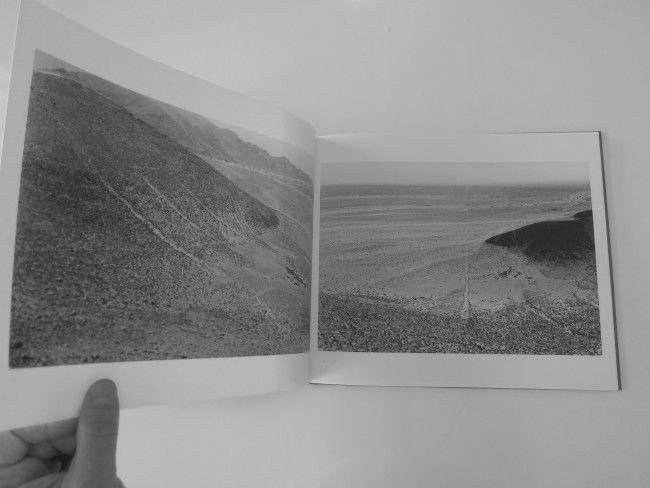 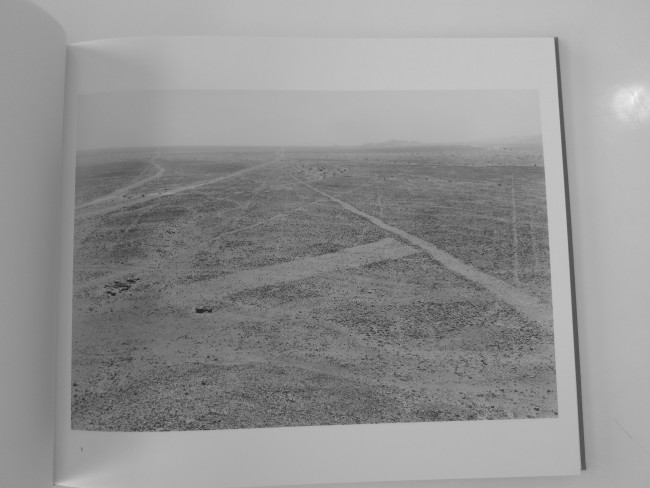 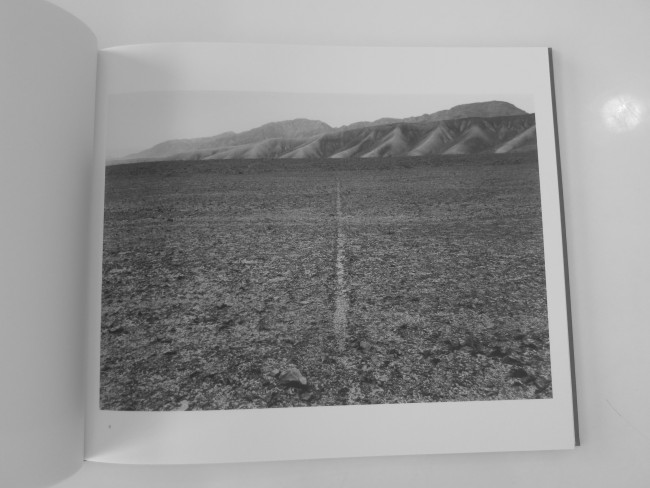 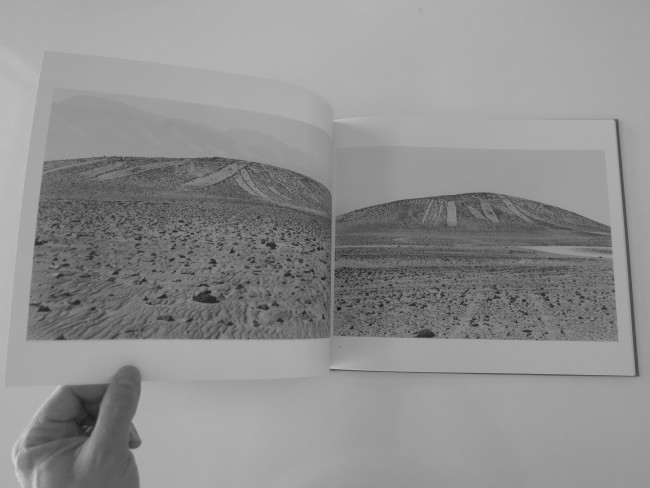 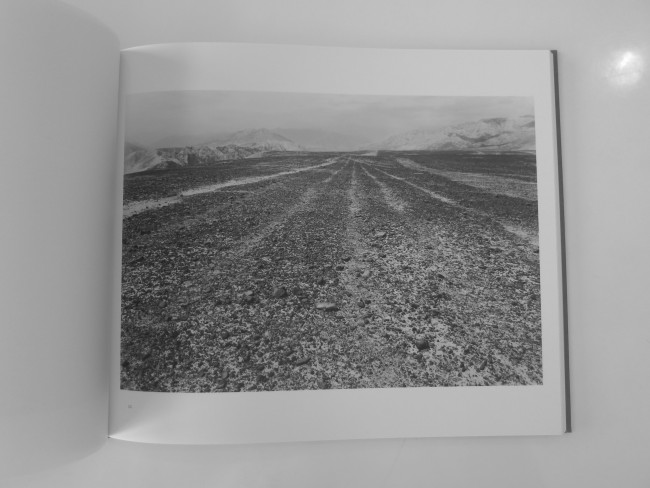 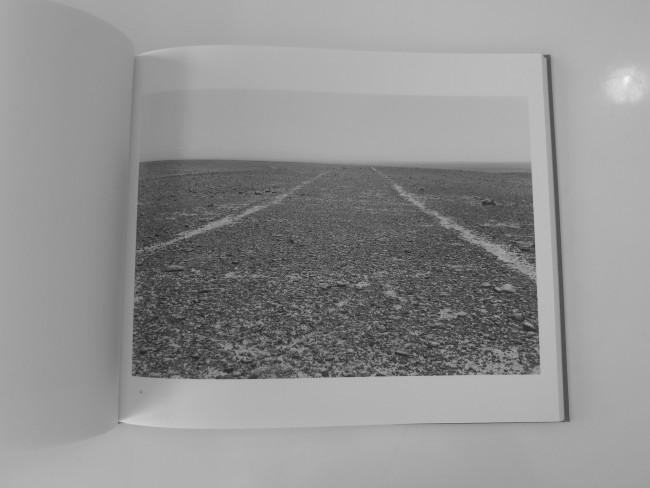 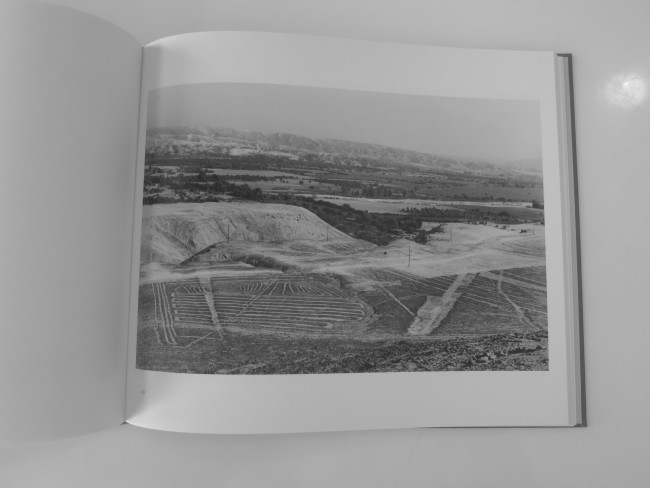 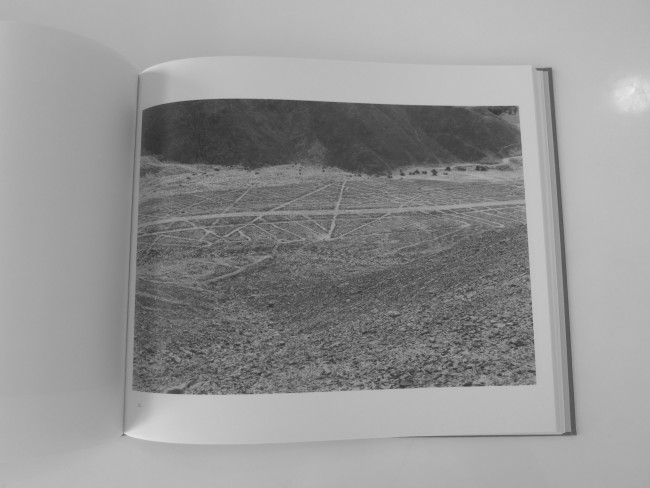 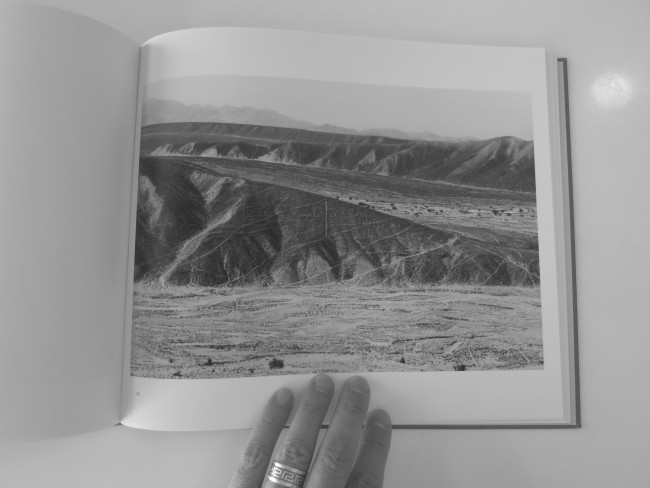 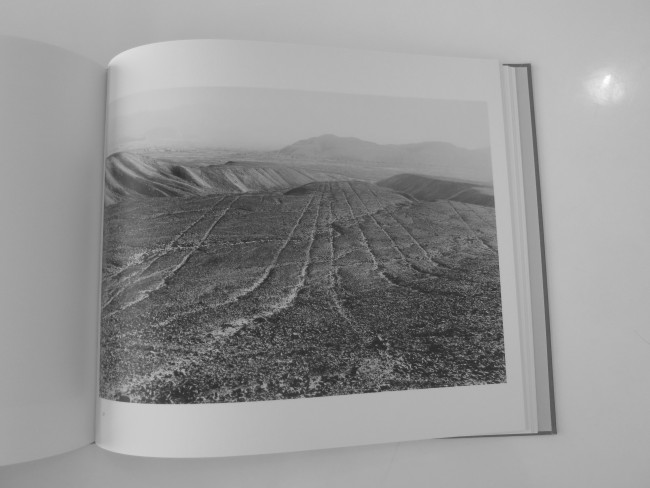 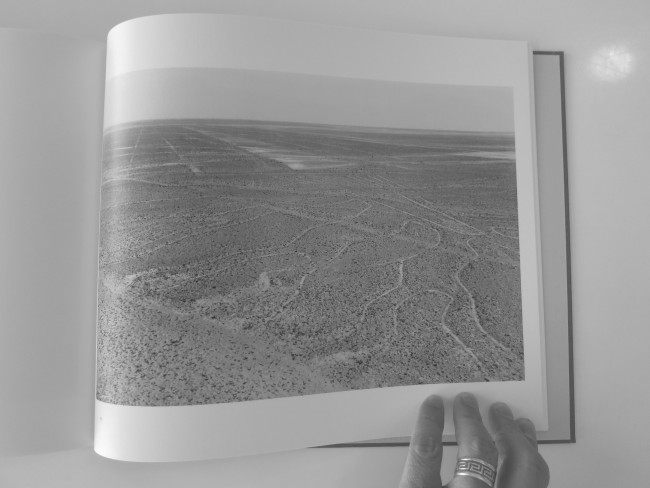 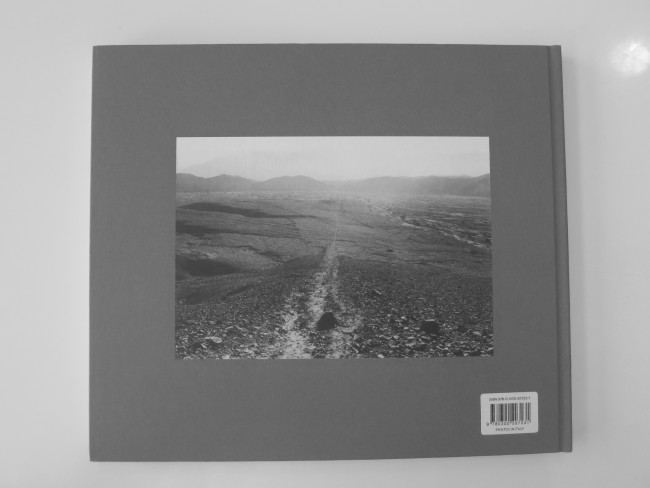