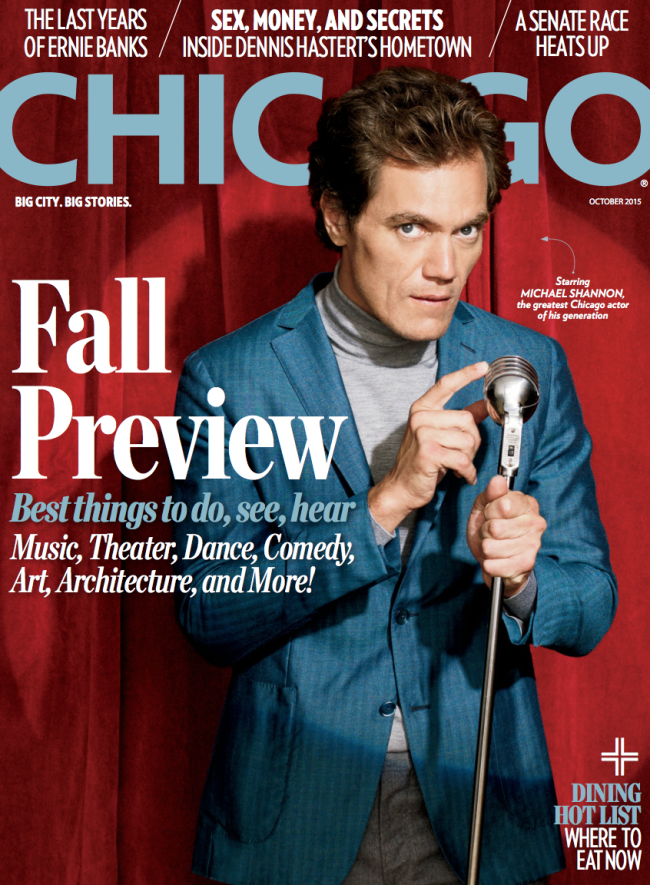 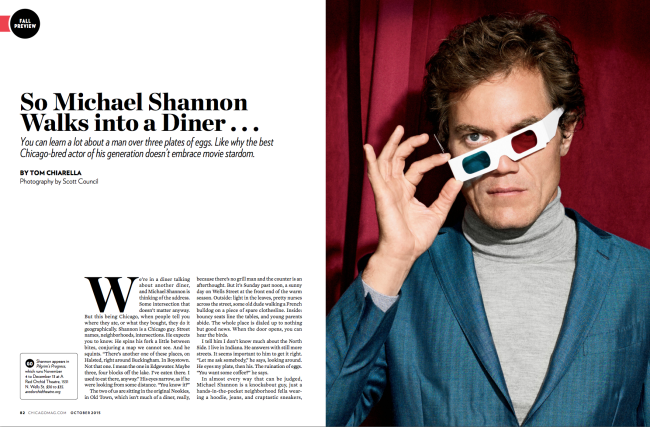 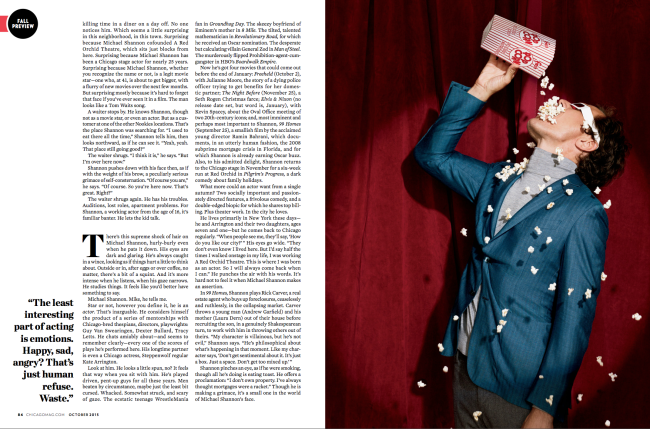 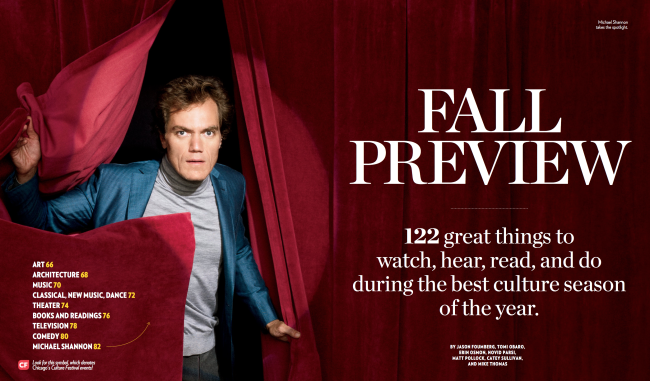 Heidi: Have you worked with this client before?
Scott: I have shot about 5-6 things for Chicago magazine. The last cover I did for them was for this same issue but last year and it was portrait series with Common.

What type of direction did you get from them?
I presented my ideas and had several conversations with the Design Director, Nicole Dudka who had a lot of great ideas, so it was a great collaboration. I also submitted my ideas with sketches in PDF form so they would have a visual to help them understand what I wanted to do. The issue was about the fall arts in Chicago. Its called the “Fall Preview” and it covers everything, music, theater, dance, art, etc. He started his acting career in Chicago and went to school in Chicago so they wanted a portrait series with images of him doing things related to the arts.

How much time did you have with the subject?
I had him for 3.5 hrs including wardrobe changes and lunch. We did multiple set ups, I had two alternating sets, both in New York studios.  I wanted to do three, but there wasn’t enough time nor budget.

What is the easiest aspect of shooting accomplished actors, and conversely the hardest?
The easiest part about shooting accomplished actors is that they really seem to know who they are and they don’t let their publicist run everything as much. They don’t have anything to prove because they are already know. There for they can take what you’re trying to capture and really make it their own, they “deliver.”  They seem to be more responsive once they are on board with the ideas. Point being,  take new talent for example: They have a career they are grooming and so they try a little too hard, worry too much about their image and some still let their publicist think for them, this can be difficult on set.

He has a great range in this shoot, how did you change the tone, what sort of direction did you give?
They wanted me to have him bobbing for apples and doing a lot of things that are kind of not at all who he is, so it was a little tough to sell him on the ideas.  At lunch I saw him by himself and I went over and we talked about what I would like to shoot and what the magazine wanted me to shoot. He said “People are always asking me to do things that are not me, its like everyone wants to make fun of me.”  I mentioned this is firstly a portrait session and secondly, a cover. I didn’t want him to do anything that was not him.  With all my subjects I’ll explain what I’m trying to capture and then they can add or subtract anything. We work together and we both feel good about it. At the end of the day,  you need to live with the photography.  I really meant what I said to him,  I wasn’t trying to trick him into doing what I wanted. I created an honest dialogue with him and I gave him the option to participate, we all want the same thing: To do a good job.

What do you enjoy most about portraiture?
In the end I’m not interested in creating entertainment photographs so we can all stand and stare of the actor, athlete and see what magic they produce. I will always deliver an image that I was hired to deliver, but that doesn’t mean that I’m going to relate to it. Often project goals and true photographic goals aren’t aligned. I’m interested in Michael Shannon as a person as an equal human being with a voice and an opinion.  I fell in love with portraiture because when I look into a portrait I see myself, I see each one as a little symbol of everything great and everything beautiful about who we are as human beings.