I got a lot of good feedback on last week’s review. Honestly, I wasn’t that surprised. Who doesn’t love to read the ramblings of a slightly deranged mind?

It was as if I were Raskolnikov for a few moments. Fleetingly crazy, only without the menace. Who knew what I might say? I could have written the whole thing stark naked, having a laugh at everyone’s expense, and no one would have been the wiser.

This week, however, I’ve moved past the pain-killer phase of this particular illness. As two of my students correctly predicted, it migrated from my throat to my chest. Now, I have bronchitis, which is less painful, but more annoying.

And yet, as I said last week, the trains must run on time. Books must be reviewed. Content must be produced. It is the way of the 21st Century, and who am I to question reality?

(Were I still in the Dostoyesvky-impersonating phase, I might do just that. “The world. It is bleak. People. They are dark, miserable animals. Happiness is an illusion. We are all capable of murder. Why go on living? What is the point? I really should kill myself. Or better yet, someone else. They don’t deserve to live. I hate them. I love them. I am thoroughly confused.”)

Are you confused? Shall I make things less complicated for you?

How’s this? Andy Freeberg’s new book “Art Fare,” published by Sojourn, is awesome and hilarious, in a dry, insider-kind-of-way. He laughs at the type of powerful, humorless people that normally intimidate the shit out of regular folks like us: Contemporary Art Dealers, and their bespectacled minions.

This book requires little explication, which is why it is perfect for today. The pictures below will amuse you, for certain, and allow me to wrap this column up quickly, so I can go back to my obnoxious, Russian-level suffering.

The pictures were made in the Miami Art Fairs, and feature gallery owners and workers in front of the goods they buy, sell and trade. Not much to figure out.

There are connections between the people and the art, occasionally. Like the guy in front of his own painting, with his wiener hanging out.

But what I really loved was the fact that almost all of these people have adopted the kind of affected, bored-of-the-world, I’d rather check my Iphone than stare at a wall, I’m-better-than-you-are kind of postures. It makes you want to punch them in the face, collectively, but then, not really. They’re just flawed human beings, as are we.

Everyone gets bored, I suppose, and if you stare at the art too long, perhaps your mind will explode.

Bill Hunt, who writes an essay, is also featured in a photograph, at his former gallery Hasted Hunt Krautler. In fairness, his pose affects no such ennui. (Which really ought to be a Russian word, instead of French. Don’t you think?)

He ends with Chuck Close, in his wheelchair, looking at an Andy Warhol “Soup Can” on the wall. What a great way to “close” a book. Perfect, really.

Bottom Line: Hilarious, well-observed investigation of the Art-World-Gorillas in their natural habitat 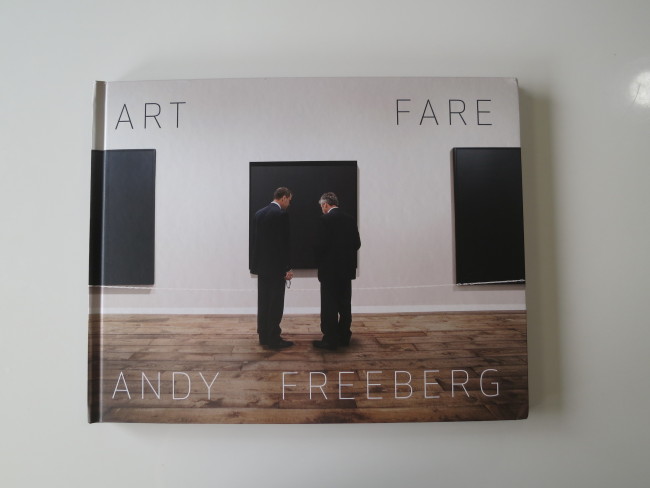 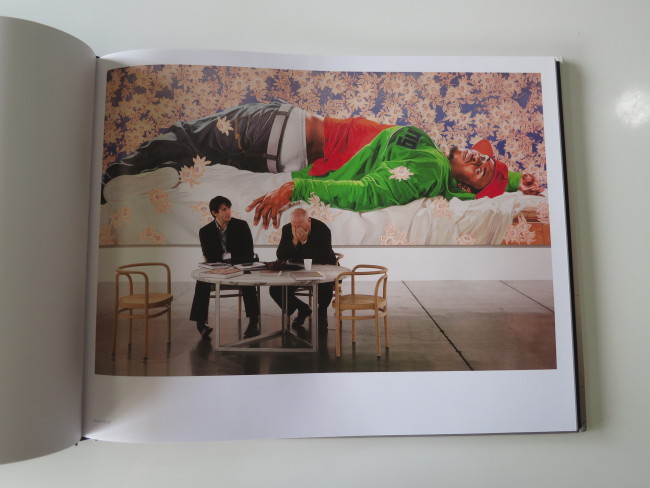 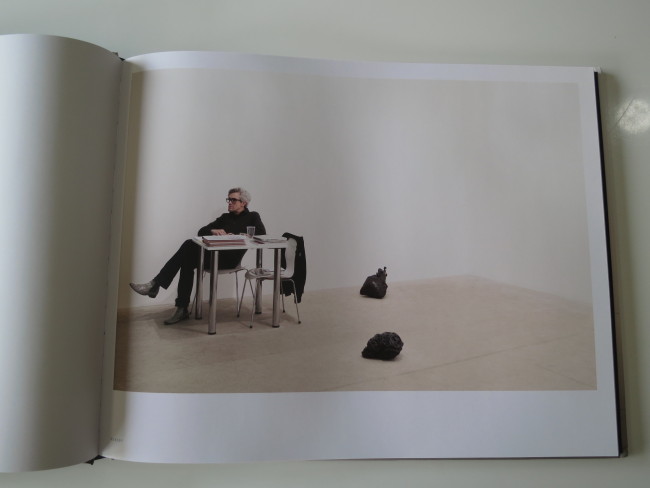 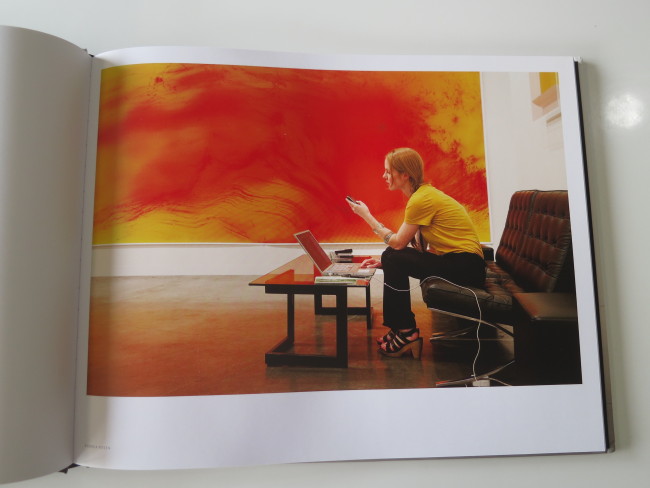 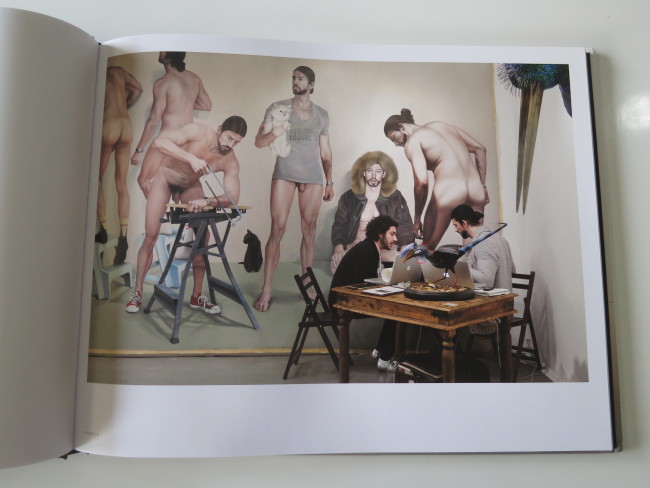 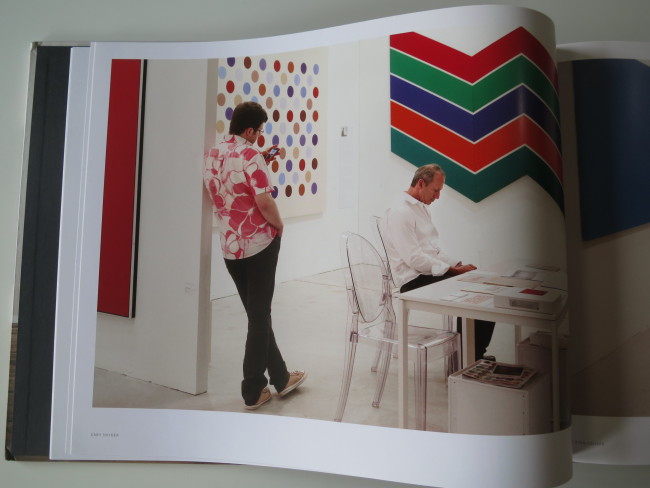 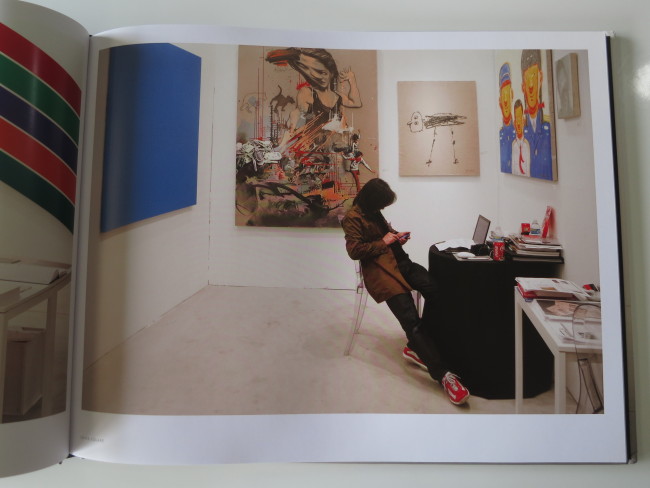 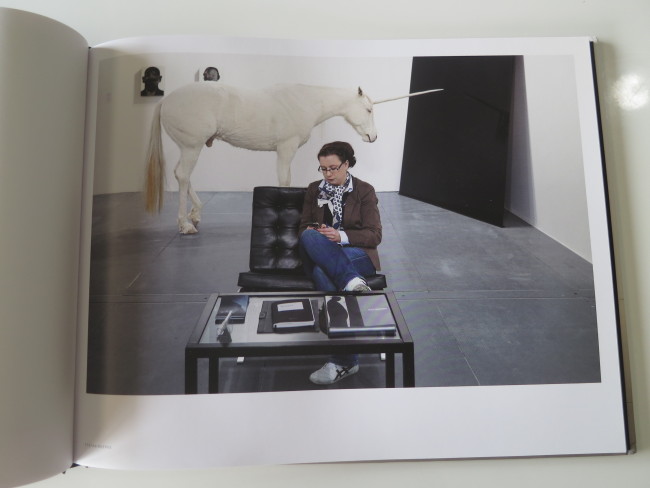 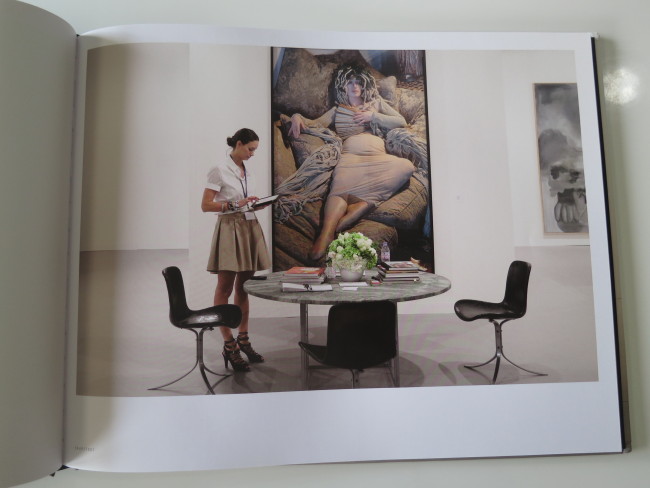 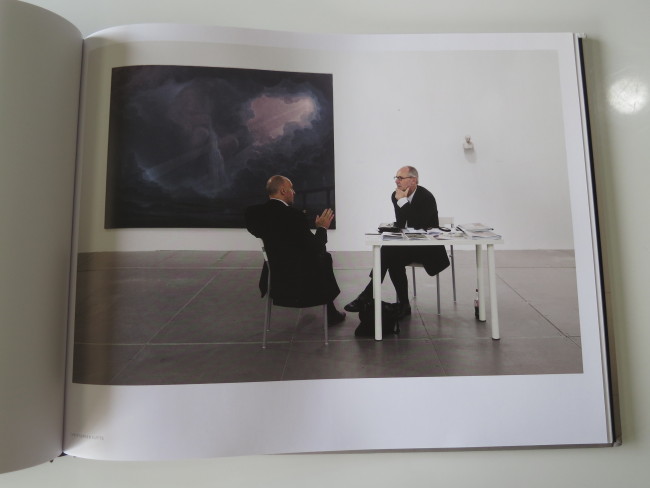 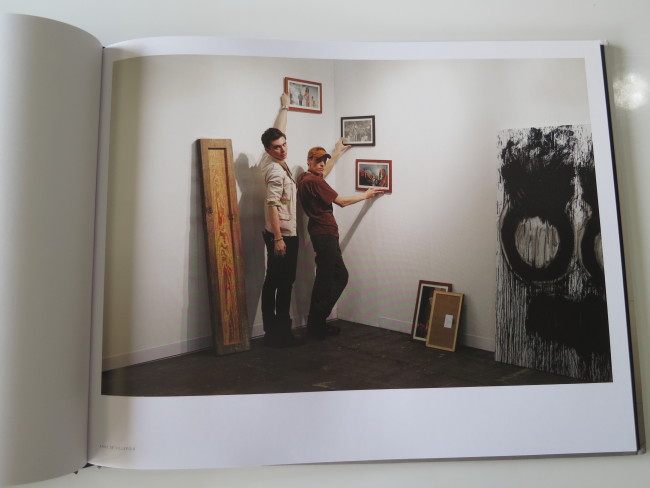 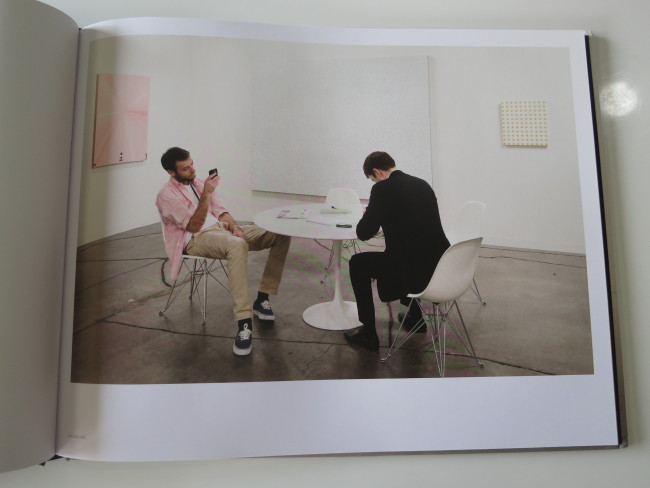 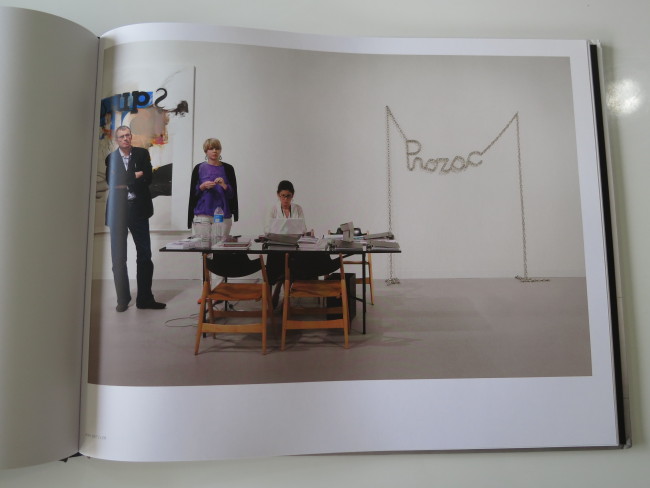 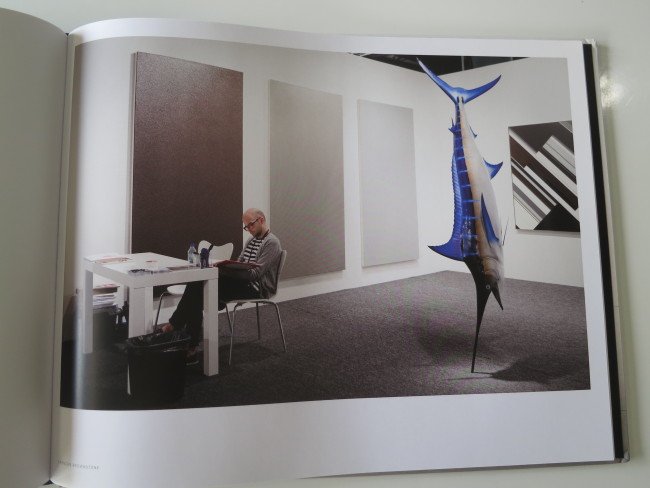 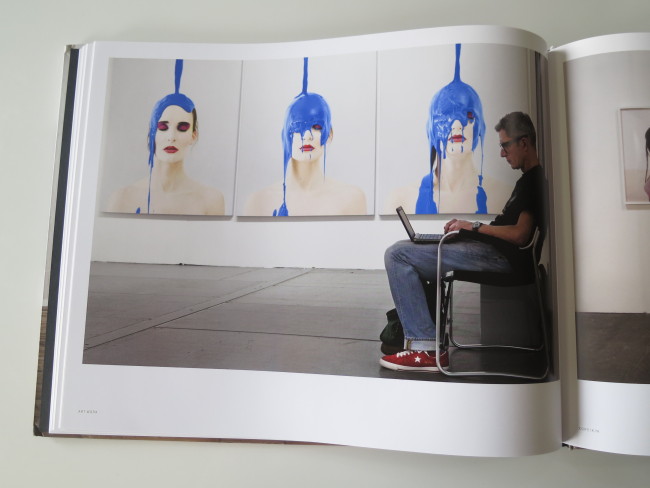 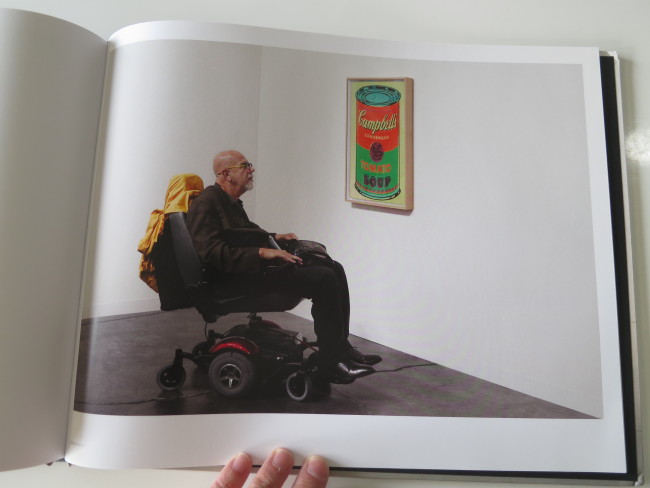 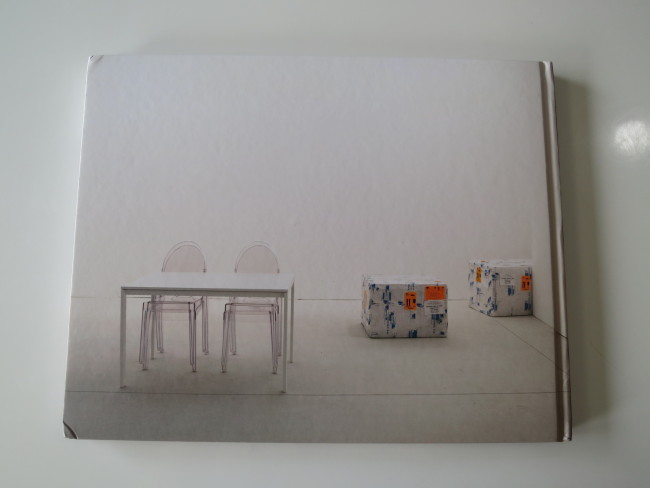 The Art of the Personal Project: Dennis Stevens