The Best Work I Saw at Review Santa Fe ’14

My father reads my column every week. Without fail. Recently, he took exception to the fact that I labeled my writing “nonsense.” Thank goodness for encouraging parents.

I try to keep these articles entertaining, and have found that a little self-deprecation goes a long way. Occasionally, I revel in it, because I used to have very thin skin, as a youth. I’d fall to pieces if anyone made fun of me. (As Dad can attest.)

That’s why I love to start these travel pieces and festival reviews with a funny story, making me look foolish. Like the time I set off the fire alarm at the NY Times review. Or the time a heavy door at Gagosian hit me in the stomach, right in front of a gorgeous gallerina.

Eventually, though, I was bound to run out of embarrassing incidents. It was inevitable.

And here we are.

Nothing funny happened to me at Review Santa Fe this past June. I was invited as a roving reviewer, and as the guy who announces their raffle at the Saturday night party. (Yes, I broke into Spanglish, but it was more ha-ha funny than Ricky Gervais cringe-worthy. So not relevant here.)

I had a very nice time, as it was my sixth consecutive trip to the review. Good food, good weather, lots of nice people from around the world. I think I’ll even skip the part where I defend the review process from those who get upset about having to pay for meetings.

So if nothing bad happened, nor anything eventful to recount here…let’s get on to showing the best work I saw at the RSF ’14.

Qian Ma is a photographer based in Brooklyn, who recently finished a degree at ICP. In a perfectly strange coincidence, he just finished studying with my former professor, the great Allen Frame. I wasn’t surprised to hear that, as Allen is adept at pushing young artists to dig into a practice that allows their personal aesthetic to shine.

Qian’s black and white prints were totally gorgeous, and admittedly, the jpegs don’t do them justice. People literally lined up to see this work. I loved the otherworldly, odd, metaphysical qualities. How a simple cell phone can make you think of a parallel universe. So of course I asked him if he read Haruki Murakami, and of course he said, “Yes. Everything he’s written.” The project is called “Luminance,” and if you happen to see a sheep man lurking in a corner, at least you were warned.

I met Julia Cybularz within seconds of walking into the open portfolio viewing at the Santa Fe Farmer’s market. Normally, you wander around such events, looking for the juicy bits. Not that night. Hers was the first work I saw, and I loved it.

She’s photographed her niece, who has horrible scoliosis. Debilitating stuff. The photos were elegant, razor sharp, and visceral. Apparently, Ms. Cybularz suffered from the same affliction, which adds to the resonance. She also had a concurrent project which featured her cousin, who has schizophrenia and is mentally challenged. And he has scoliosis as well. It made for a fascinating mix of family, malady, and personal connection.

Meike Nixdorf is an artist who was visiting from Germany. Again with the Japanese references, she was showing a project that was inspired by Hokusai’s “36 Views of Mt. Fuji.” She was looking for a mountain that she could photograph from many different angles, that would allow the structure of the pictures to change radically.

She found one, El Teide, in the Canary Islands. I asked her why there, as it seemed so random, and she told me she visited the mountain many times, flying over it in a virtual flight simulator. If that’s not updating Hokusai’s vision to the 21st Century, I’m not sitting at my kitchen table on a rainy day in the mountains. (In fact, I am.)

I also met Miki Hasegawa that night. (Two women with different spellings of the same name?) Miki had a series of images that she photographed from the vantage point of her young daughter.

As we all know, life is lived at eye level. We grownups make the world in our image, but our offspring are always looking up at a reality they must grow into. Terrific color palette as well, and the prints managed to capture the wonder and curiosity of childhood. I loved them immediately.

I had a long, rambling, roving review with the Denver-based photographer Benjamin Rasmussen, who’s originally from the Faroe Islands. (They’re in-between Norway and Iceland, so you don’t have to Google it.) He’s interested in issues of identity and displacement, and his project “By the Olive Trees” focuses on both.

He photographed Syrian refugees in Jordan. And he was apparently in Ferguson, MO, last week, so you can check his website to see what’s going on in America’s homegrown war-zone. (Hands up, Don’t shoot.)

According to Twitter, Russia invaded Ukraine today. Is that news? Haven’t they invaded several times already, including when they swiped Crimea? Hard to imagine a more topical project than one which examines the cross-cultural divide between the two countries. (Soon to be re-united?)

Sasha Rudensky was born in Russia, and studied in the famed Yale program. With her project, “Brightness, she has given us some seriously strange pictures that do just that. She photographed in both places, and the image of the thugs holding a giant snake was my favorite single picture at RSF. (Unfortunately, she isn’t ready to publish it yet.)

Finally, I got to see the work of Jeanine Michna-Bales, who was one of Center’s Prize winners. I’d seen a couple of her prints on the wall of the Center for Contemporary Arts, and was transfixed. You won’t believe the premise.

Ms. Bales was interested in understanding the reality of the underground railroad, that patchwork network that led escaped slaves to freedom. A beacon of light in America’s bleak past.

So, she recreated it herself.

She stopped every 20 miles or so, between Louisiana and Canada, which was the supposed average distance an escaped slave could have covered. Then, she made pictures at night. It was so sketchy that she had to hire bodyguards to protect her, out in the middle of nowhere, under black skies.

Obviously, the premise is terrific. But the pictures are every bit as good. 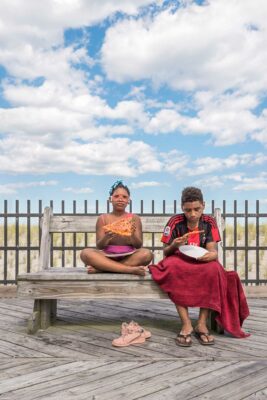