AT THE AGE of 93, Charis Wilson has seen more than most people ever will – and the art world has seen more of her than almost any other woman in the history of photography. As Edward Weston’s lover, writer, companion, driver (Weston never learned to drive), and model from 1934-1945, Charis left an indelible imprint on Weston’s work and the way in which his photographic nudes are examined. Charis is the subject of more than half of all of Weston’s nudes, including some of his most famous – the Oceano Dunes series and Nude in a Doorway. His portrait of her at Lake Ediza is well known (if somewhat misunderstood). Charis grew up in a literary family, surrounded by adults and few children to play with. She was a sickly child and developed her strength by bicycling – and swimming naked out to the kelp beds in Carmel Bay. When she met Weston, she was 19 and he was 48, already an accomplished photographer with one book to his credit and a growing reputation as a new breed of modernist photographer. Her literary skills helped secure Weston a Guggenheim grant in 1937 – the first ever awarded to a photographer. Her insight and observations accompanied his photographs during their Guggenheim travels in the ground-breaking and bestselling book, California and the West. 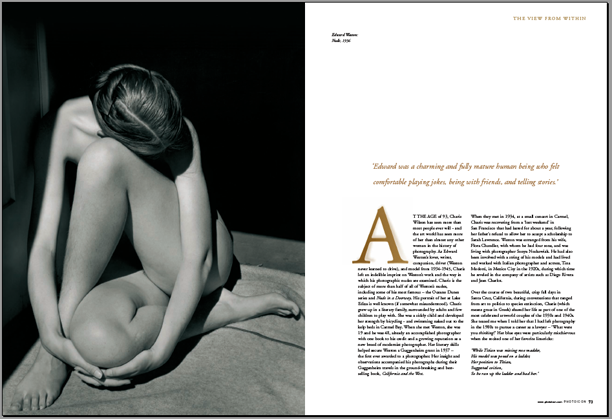 What was your reaction to seeing the photographs for the first time? I had seen some poor reproductions before that – but to actually look at the prints, I had never seen pictures like that. I was used to other people that made pictures softening things – the Pictorialist style was in vogue – so I had never seen photographs like these. Sonya showed me some of the shells and the peppers – then pulled out some of the 4×5 nudes.

… and what was your reaction to the nude photographs?
I thought they were terrific. Again, I’d never seen anything like that.

What was the posing or directing method that he would use in those early sessions?
He didn’t give any directions. He just said: ‘Go over there and sit down or lie down, or do what you feel like doing and move around all you want. Change your position as you want to’. That’s what Sonya had told me: ‘… there’s nothing to posing for Edward. In fact, you don’t even pose. You just move around and do what you feel like’. And that’s all very well, except when you try to do what you feel like he’d yell: ‘Hold it! Hold it! Stop right there’. So you could never move without being told to ‘hold it’. I had a mental picture of what I would look like in his camera – these rather idealized nudes based on ones seen in his darkroom – but even after 5 or 6 moves I never got to the point I had imagined because he’d keep stopping me on the way.

It was during that time in 1936 that Edward made the famous nude study of you in the doorway of the Santa Monica Canyon house – and neither you nor he were completely happy with that image, correct?
Well, we knew it was a good picture. But we had our objections to things that should have been straightened up.

You were not satisfied with the uneven part in your hair and the bobby pins and he was not satisfied with the shadow on your arm?
That’s right. Well, the shadow on my arm was really worth protesting, because if you didn’t print it very carefully it looked as if I had a withered arm. Whereas the hairdressing was simply sloppiness on my part I’m afraid.

… and he only made the one exposure of that?
He did with everything 8×10; you couldn’t afford to make duplicate exposures. He never did. 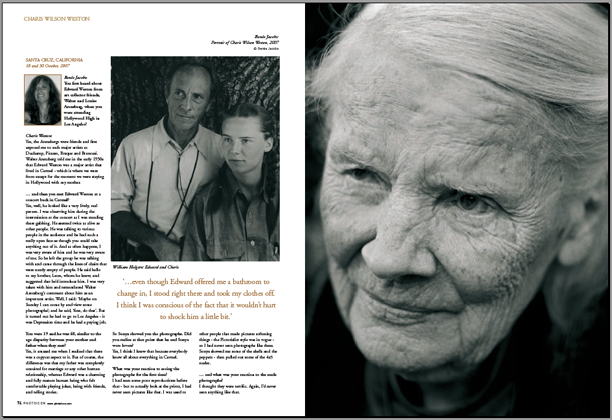 People read all sorts of symbolism into Edward’s still lifes – that he never felt was there. Did you think Edward was being truthful with you and with himself (and with the art world) when he said that there were no hidden meanings?

Edward had a way of saying that in some cases symbolism was inescapable. It is just there and you can’t very well erase it when you’re making a picture, even if what is moving you to make the picture is something else. So he was not interested in the obvious reading of a photograph. He got impatient with people who were looking for everything to be sexual in a picture of a pepper. To him, that was a much too simple – and simplistic – way of looking at a picture.

And similarly, with the famous Lake Ediza photograph – you’ve written about how tired you were and how exhausted, but still you were somewhat perplexed or amused that people would read into that photograph a certain sensuality. It was really you just sitting against the rock exhausted.
Um… hmm. Yes, I really was just exhausted [smiles].

It got to the point where driving around during the Guggenheim travels, Edward would doze off and you would scout a location because you were so tuned in…
Uh huh. Right. For the most part.

But you felt like you still could never quite see the ‘Weston moment’.
In the early years, I was obsessed with doing that. I was making the picture in my head. I figured I knew what he was doing, and how he was seeing, so well that I could put it together – I never did. I finally figured that Edward was the picture maker and I was the wordsmith. He simply does not do it in words; I do not do it in pictures.

Why do you think you were obsessed in the early years with doing that?
I think because I had a very strong feeling that anything anyone else could do, I could do, you know. It was really bigheaded on my part, I think. That everything in the world could be that simple. That it was possible to get hold of and ease myself

Did you ever have any desire to photograph or do nudes of him?
No. No. I never wanted to take photographs. And it absolutely amazed Edward, because he had a good number of female students in those days that had all been helpers of one sort or another and he kept offering to teach me. I always wanted to look through the ground glass, in fact, it was so automatic that he finally stopped asking me and just moved off for me to get under the focusing cloth and look at his picture. He knew I always wanted to see it. But to do anything photographic? Absolutely not. I knew this much about photography from listening to what he said. It took far more command, self-command, of what you were looking at and doing than I would ever have. As far as I was concerned, writing – which is what I assumed I was pretty good at – meant that you wrote and then you rewrote – and then you rewrote again. Carefully. I had learned this from my grandmother and great aunt and father, all of whom were writers of one kind or another. Something you worked on. This was anathema to Edward. Photography – a photograph – wasn’t something you worked on. That was the kind of thing that no good people who fixed it up later in the darkroom did. He had to be so sharp and so straightforward that he could find the thing immediately, set up the camera and see just what he expected to find there. Get the thing in focus in no time at all, pull the slide, make the exposure. I could never see this as a way of working.

Why would I want to be a photographer? I loved what he did and that was enough for me.